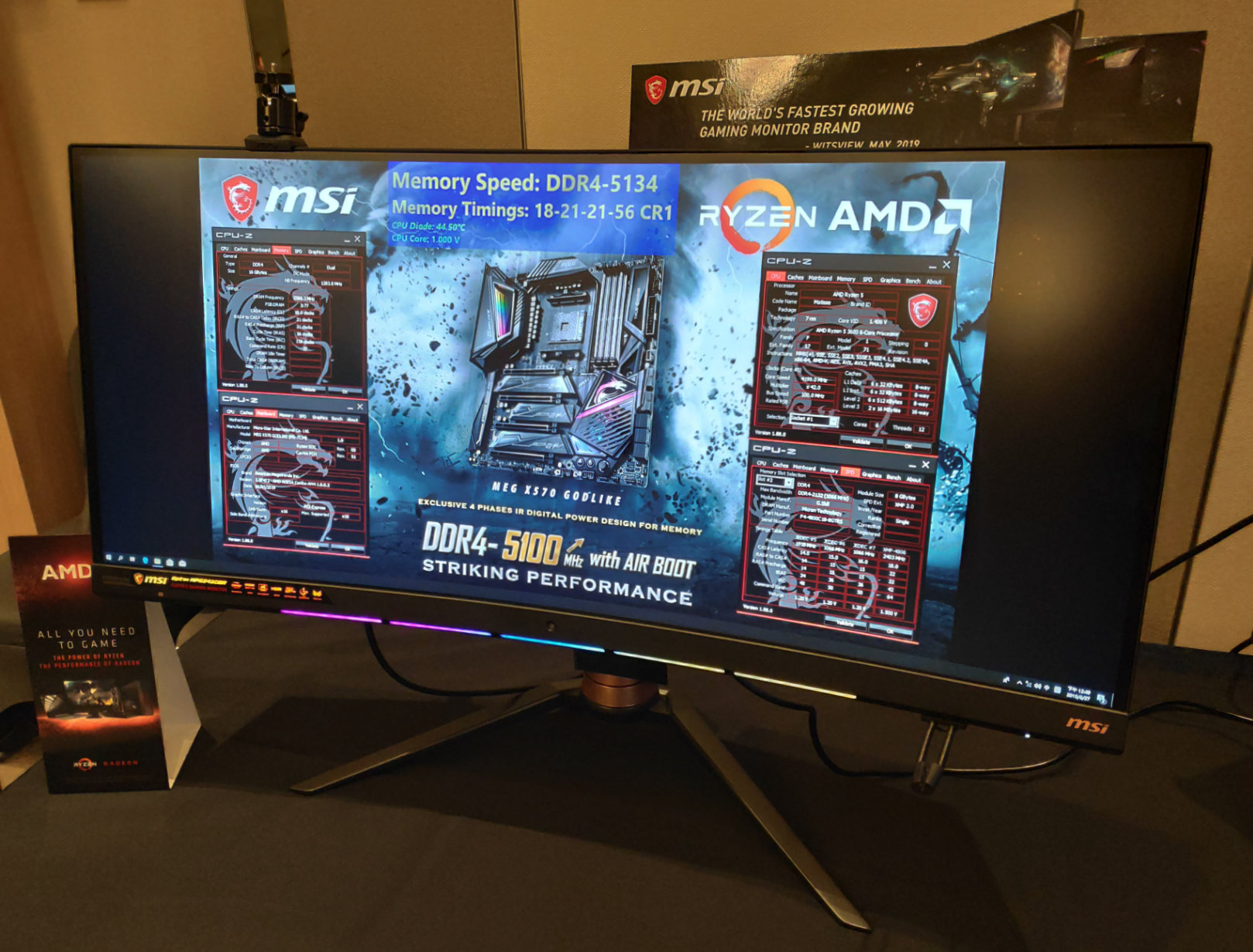 MSI always has plenty to show at Computex and 2019 was no exception. While most of the buzz was reserved for AMD’s 3rd Gen Ryzen processors and their resulting X570 motherboards, the PC components specialist still had loads of updates across their consumer tech line.

We were given a second look at some of these during an MSI Indo-Pacific event held in Bangkok, Thailand. Again, most of the attention there was on the company’s five new X570 boards, including a look at the design philosophy that went into them. However, we’re here to look at everything else.

While the X570 chipsets stole the show, MSI’s roaring entry into gaming monitors isn’t one to be ignored. After an initial launch in 2017 with the Optix Mag series, they’ve aggressively pushed into the curved monitor market with another four models. According to a May 2019 Witsview report, those efforts have ultimately earned MSI the title of ‘fastest growing gaming monitor brand.’ MSI’s Francis Yang, managing director, computing and display department, also shared an IDC report stating that they were the second-most adopted gaming monitor brand in Southeast Asia for Q1 2019. 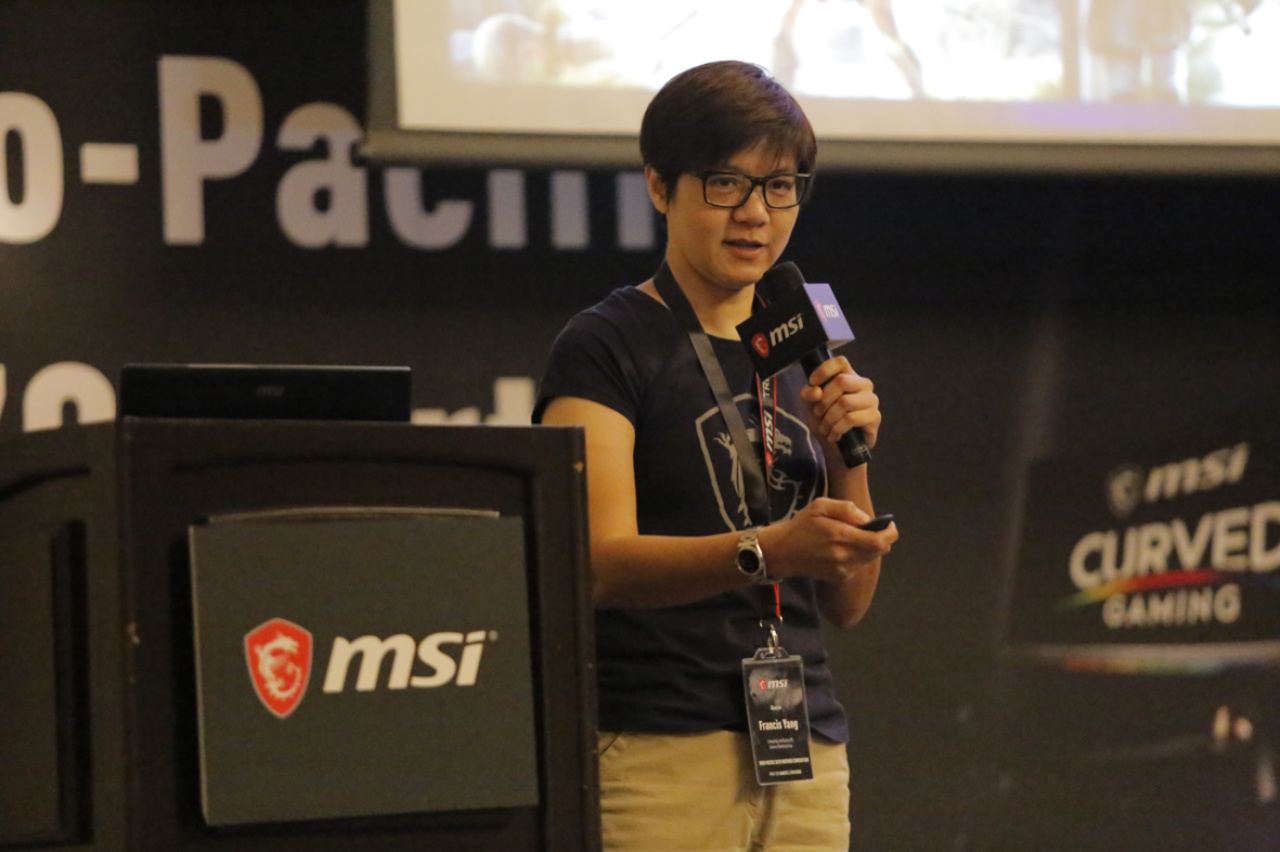 Their current flagship is the MSI Optix MAG321CQR, a 32-inch WQHD “smart gaming monitor” that runs at 144hz refresh rate and 1ms response time with AMD FreeSync. Like its competitors it tries to edge ahead with some value-added features, although these skew towards physical improvements.

At first glance, all eyes would naturally be drawn to the RGB bar lining the bottom bezel of the display. The ensuing light show syncs with MSI’s Mystic Light app, of course, but its also capable of dynamically indicating health, remaining ammo and other in-game information in real-time. For example, it can blink red to remind you to reload during a tense PUBG moment.

While that’s neat for RGB enthusiasts, more users would likely be excited by the adjustable webcam mount. The kicker? The monitor has discreet rails for it on all four sides, giving you complete freedom when it comes to positioning. Put it up on top for standard face cam uses, hang it off the side for a unique reaction cam, or simply attach it to the bottom to get a closer capture of your keyboard magic. This alone is more than enough to score plenty of points with streamers, freeing them from the hassle of a standalone mounting solution that’ll take up more space and likely ruin desk aesthetics.

MSI are also throwing in a flexible mouse bungee that attaches to the bottom of the display – it may look like a headphone hanger, but it’s too low to the desk and bends easily under a finger. You can mount it to either the left or right side through a quick snap fit system, giving some much needed love to ambidextrous mouse users out there. 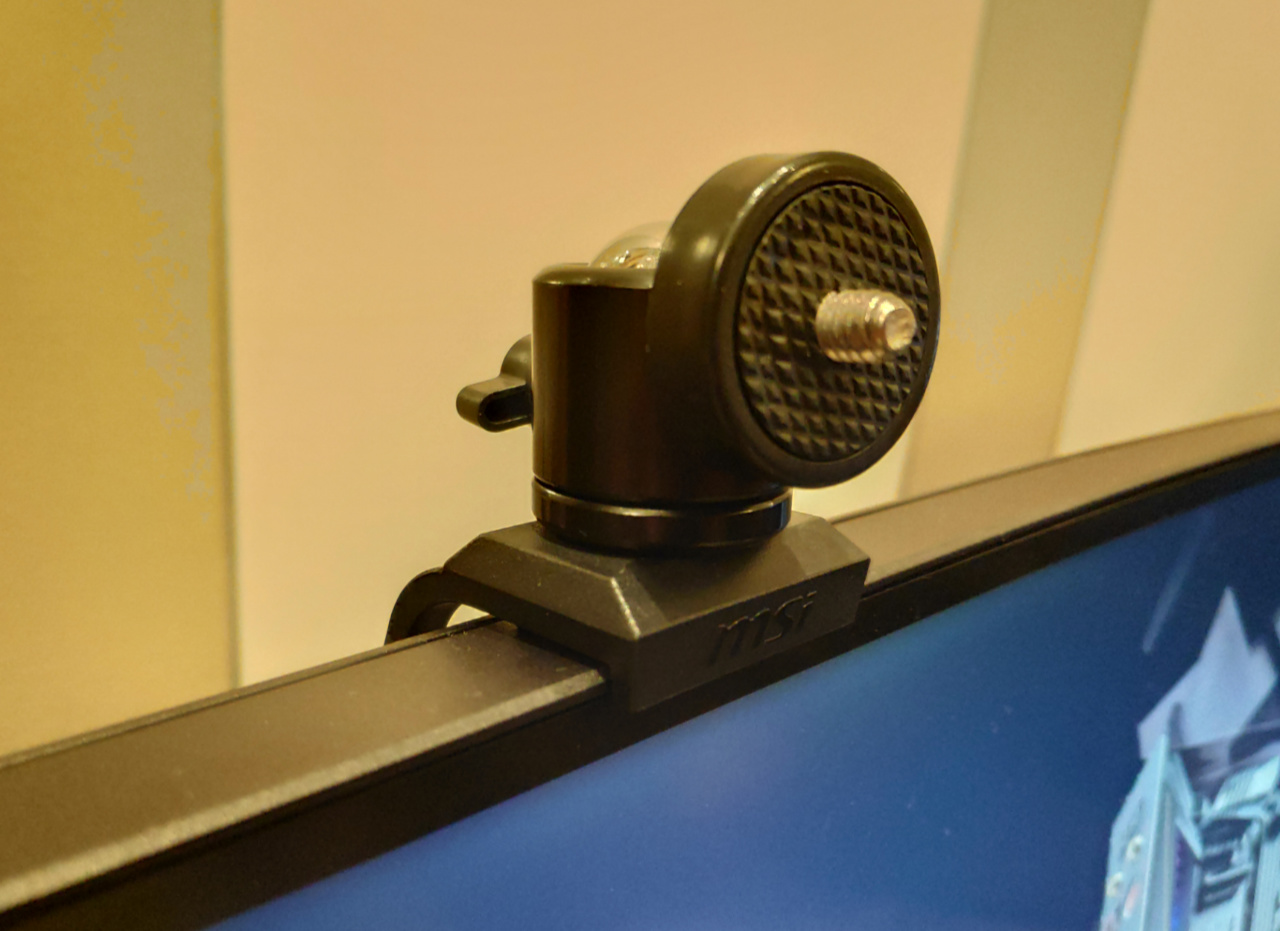 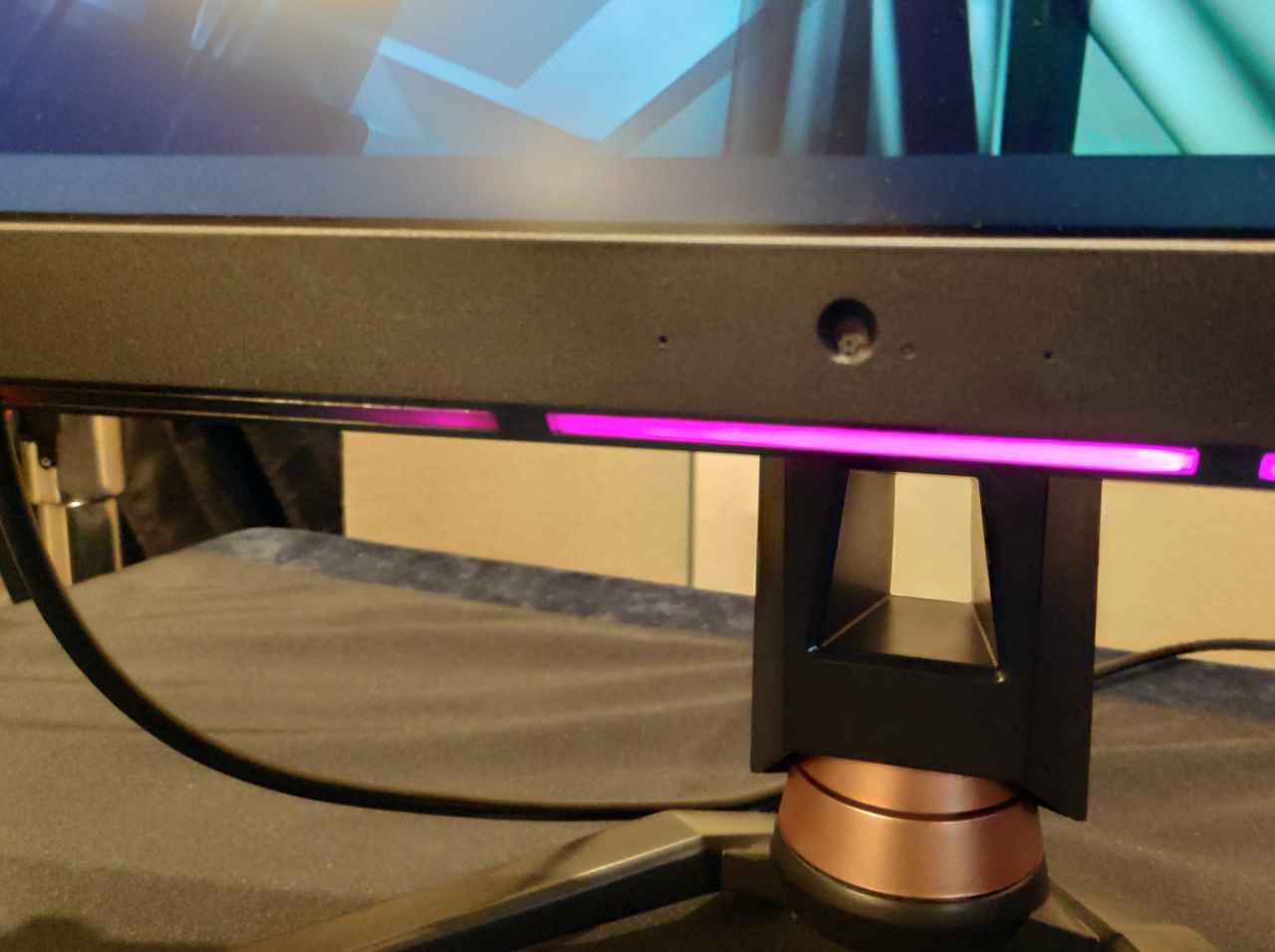 Turn your attention back to the light bar and you’ll also notice a single camera lens sitting above it. MSI says they use this for facial recognition as well as ambient light detection. Like most smartphones, the latter automatically adjusts screen brightness to reduce eye strain. There’s no infra-red sensor, however, which leads us to wonder just how well it’ll work in dimly-lit rooms – the exact sort of conditions that allow all those RGB lights to flourish in the first place.

Nonetheless, having those features on top of some seemingly impressive specs (on paper, at least) help make the Optix MAG321CQR an attractive all-rounded option.That’s not to say that they’ve been sleeping on other developments. The company has also taken a stab at esports with the Oculux NXG252R, a flat 24.5-inch FHD monitor that manages to push the numbers game by achieving a speedy 0.5ms response time at a 240Hz refresh rate. Could you tell the difference? Probably not, but it does broaden the choices of those who do want a fast gaming display.

Small desktop PCs on the rise

Hooked up to the monitors were a handful of gaming desktops, each equipped with one of the new X570 boards and various other MSI components as an ecosystem showcase. These included RGB memory modules and power supplies, complemented by the ones that were already gently strobing on the cases.

One of these cases boasted a laminated glass design. The model in question had the company’s red dragon on an interlayer, which certainly looked better than a straight up decal. While we couldn’t get confirmation, this process could lead to wider glass design possibilities such as color and texture, serving users who may already be bored of full internal views. 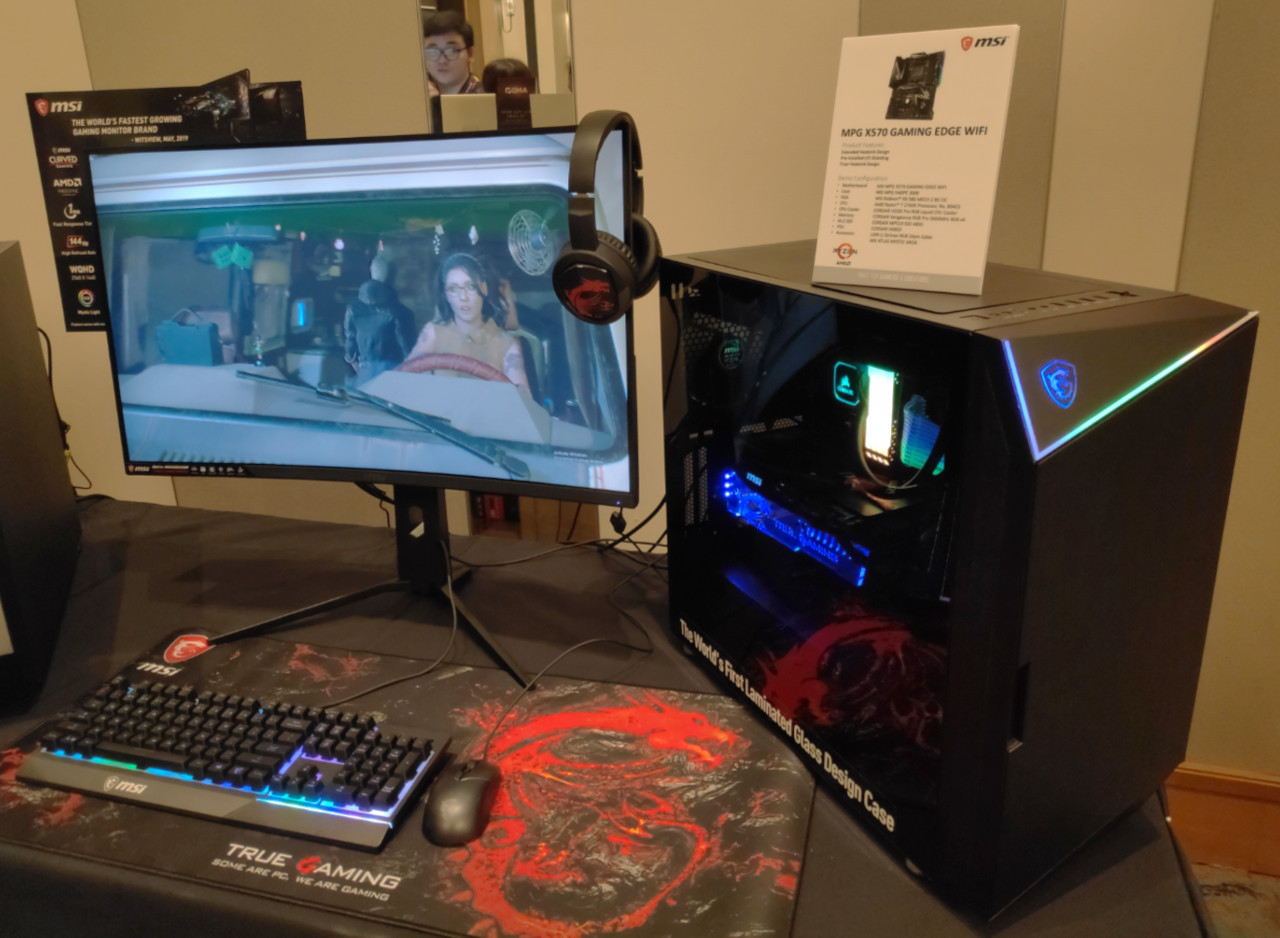 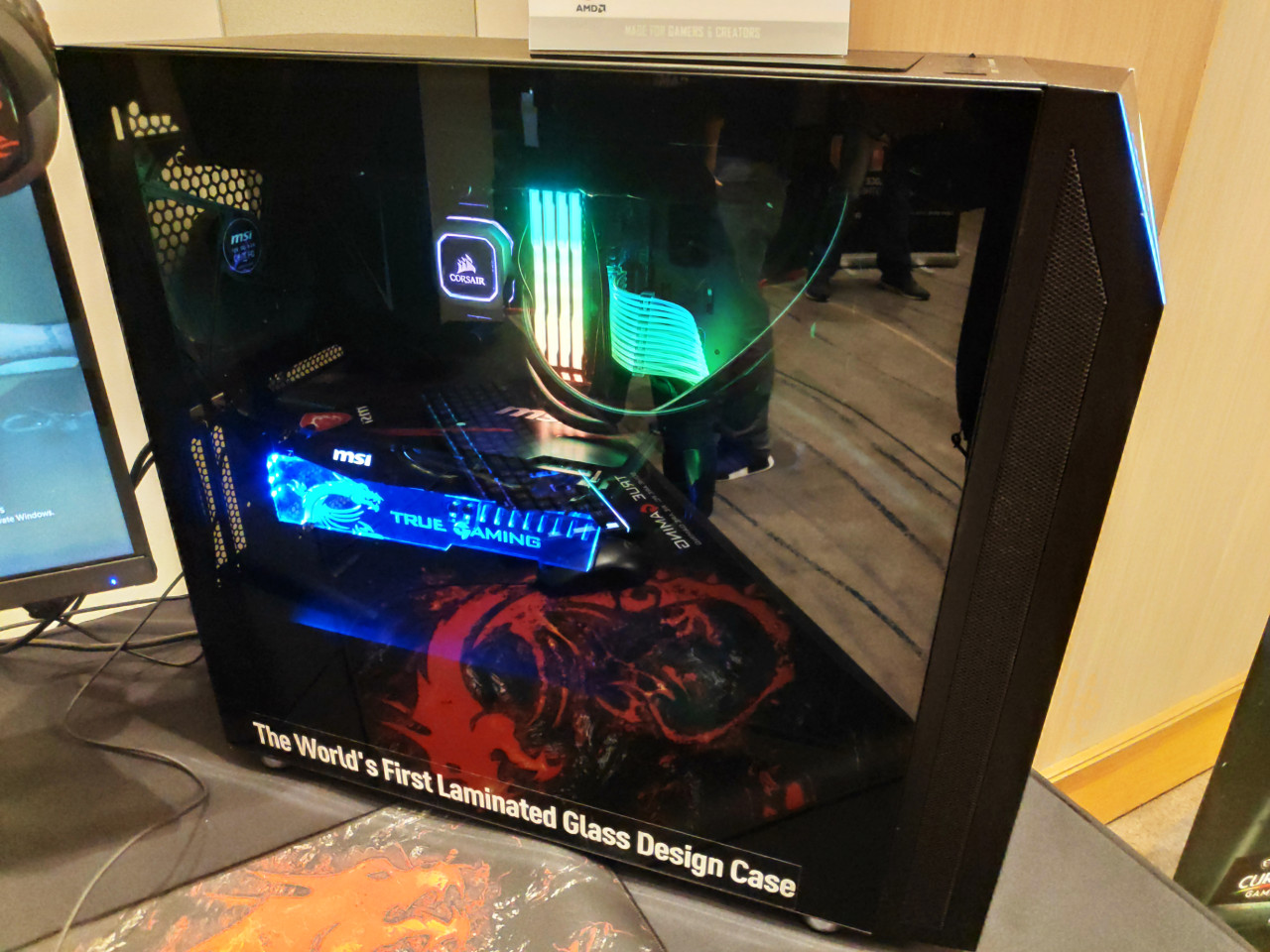 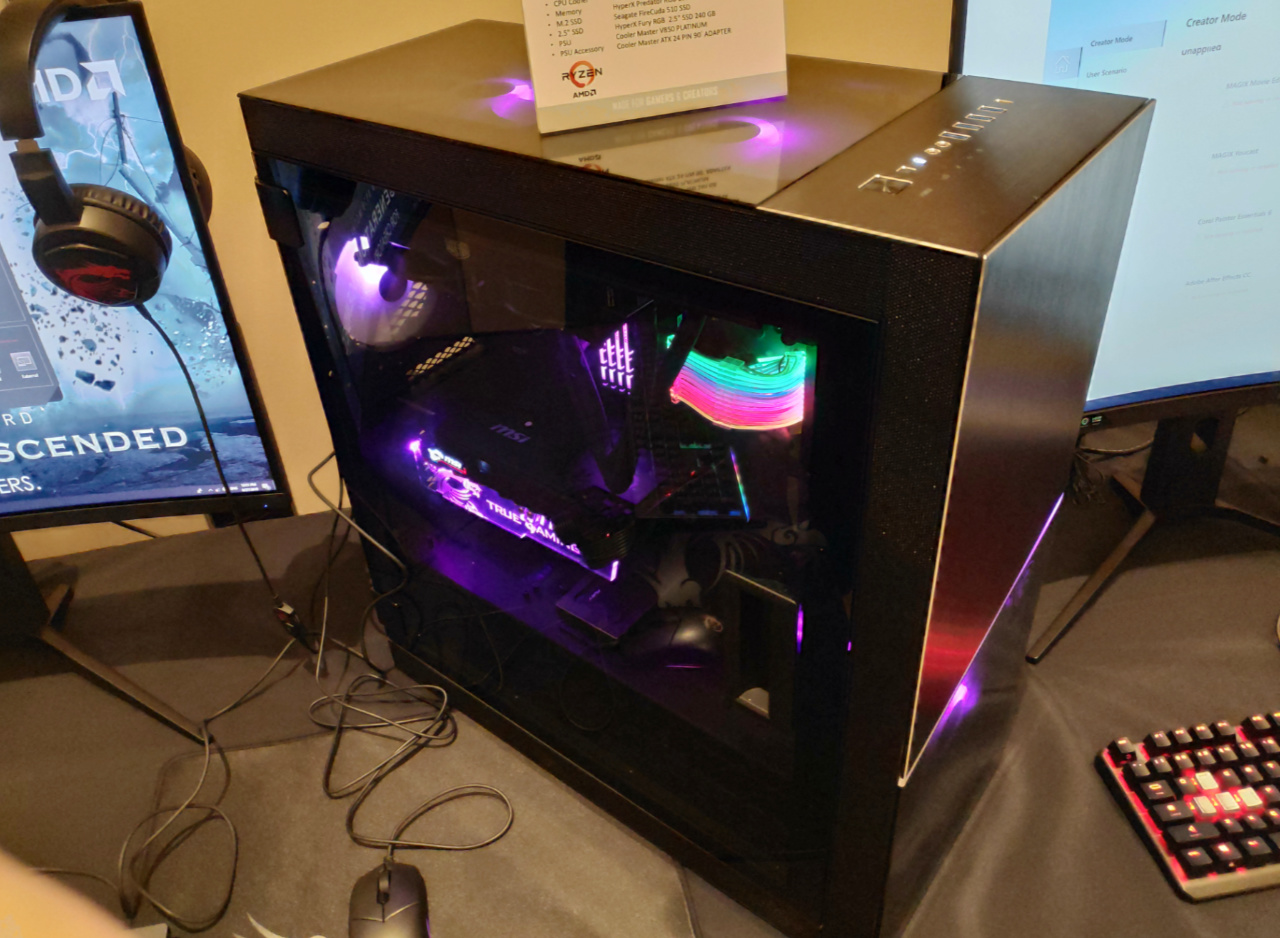 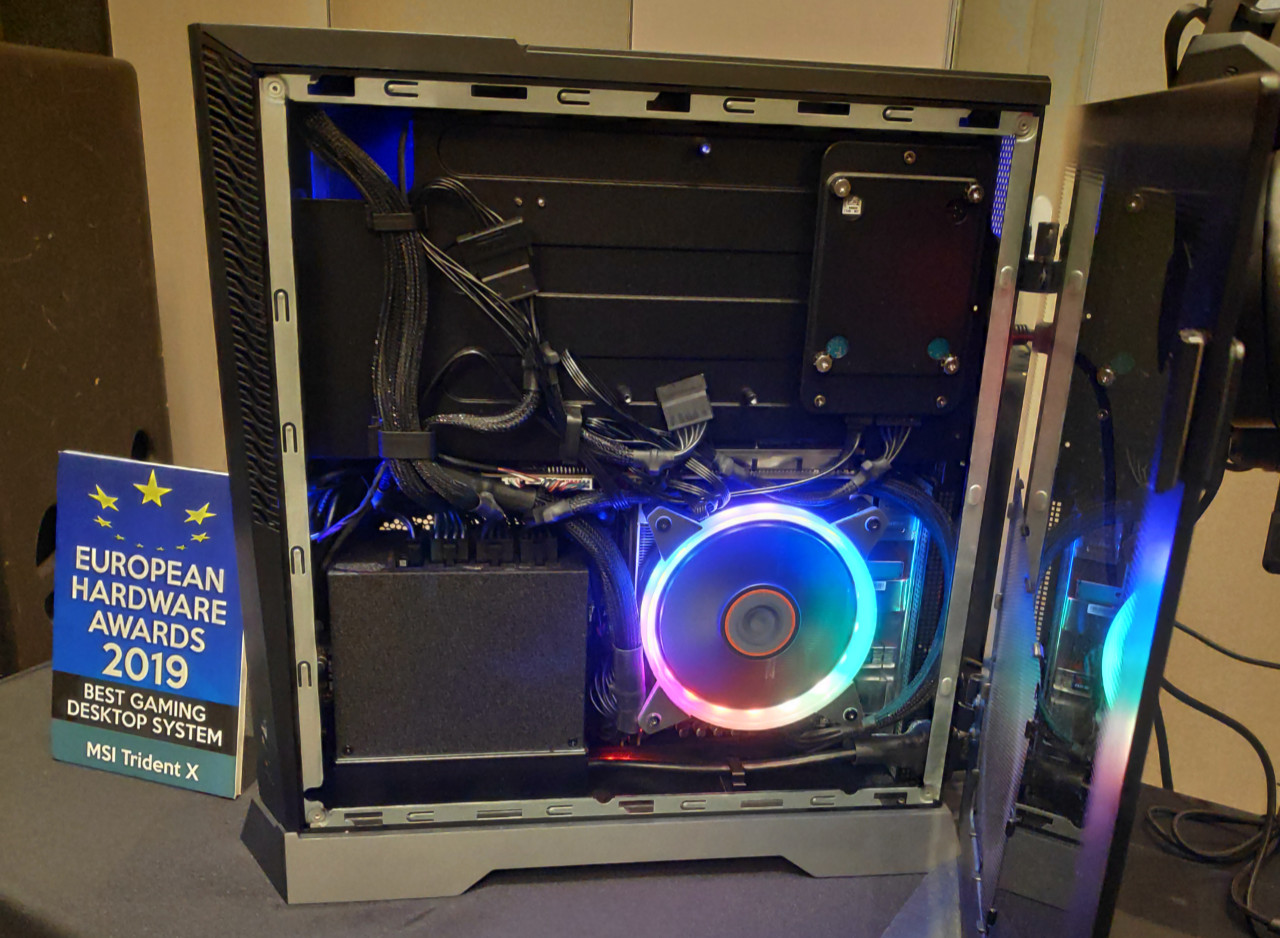 MSI offers several form factors in their Infinity and Trident gaming desktop lines, though it’s the smaller ones that have gathered attention. Sharing another IDC data point, Yang highlighted that sales for small desktops under US$1,000 have been on the rise over the past two years.

Conveniently, this puts models such as the Codex S under the spotlight. While the Trident X Plus brings greater performance to the table, MSI positions the 13-liter Codex S as one’s “first gaming desktop” with an attractive price point and a low-profile GeForce GTX 1050 Ti graphics card. It’s not an either-or proposition, though. Sitting between the two series is the Infinite S, packed in an even more compact 10-liter case (approximately twice the size of a classic PlayStation 4) though capable of packing in a GeForce RTX 2060 graphics card for serious game power. Despite the small size MSI has paid plenty of attention with regards to its overall cooling, while also ensuring that its upgradeable components are easily accessible.

And line-up of graphics cards...

Curiously, MSI only had one AMD GPU out for display: the Radeon RX 570 Mech 2 8GB OC. It’s a 2018 refresh using the company’s own custom PCB, with the usual brand expectations of low noise, great thermal performance and attractive looks to make DIY builders proud. An overclock mode pushes the mid-range card up to 1,293 MHz instead of the base 1,168 MHz, and its set to be a worthwhile upgrade for gamers who play at 1080p.

It’s too bad they didn’t show off the new Radeon RX 5700 XT there, but units are understandably in limited supply as the world clamors to get its hands on it. That 7nm GPU is built off the new RDNA architecture, promising more performance while requiring less power. AMD says that an improved graphics pipeline reduces latency, while the inbuilt Radeon Media Engine brings dedicated 4K encode and 8K decode in preparation of greater streaming opportunities. 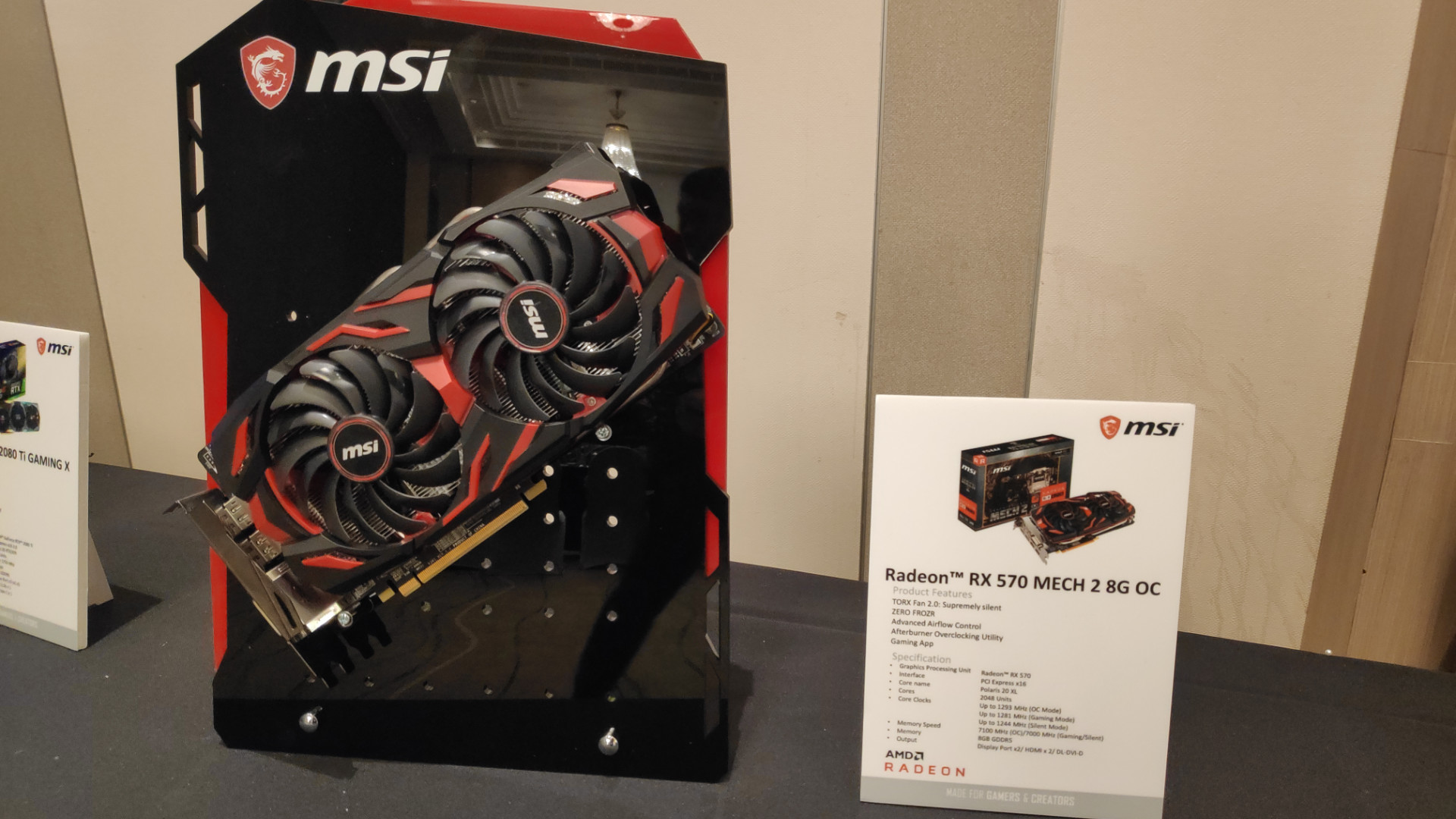 However, there was some green among the sea of red. A series of NVIDIA GeForce RTX 2080 Ti graphics cards were also being shown off, led by the handsome Lightning Z (11GB) model – RGB fans aside, it has gold-plated lightning streaks and accents that further push the premium-luxury positioning of the card. Now that the SUPER variants have been revealed, we’re sure to see more updates from MSI soon. 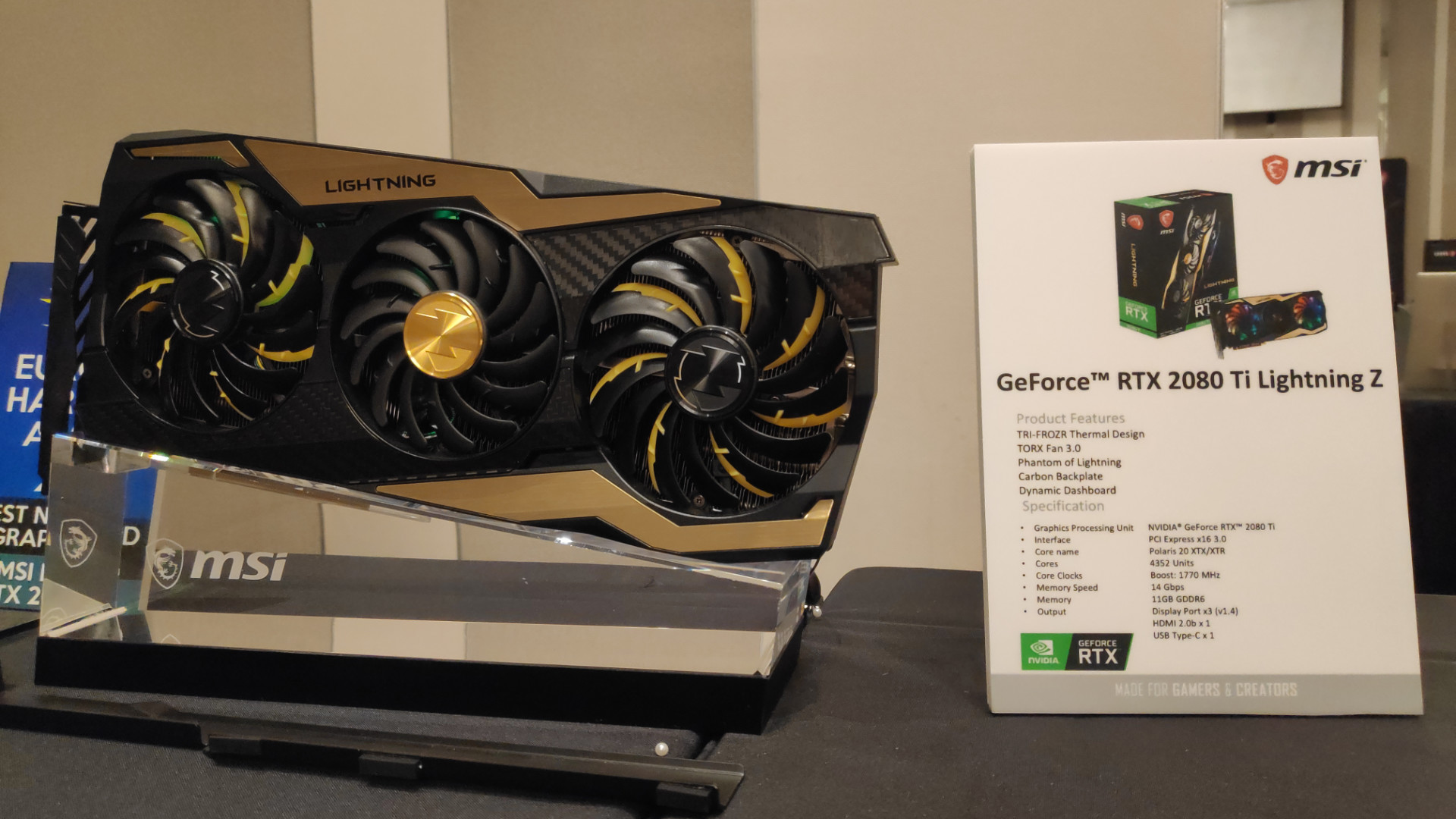 With a slogan like "Some are PC, we are gaming" it’s obvious where MSI’s product direction is headed. The AMD resurgence only serves to strengthen their portfolio, especially if the lower prices lead to more sub-$1,000 offerings to keep trend lines inching upwards. Their push into gaming monitors is noteworthy too, challenging the incumbent brands with models that just seem to tick all the right boxes. With MSI’s fingers spread deeply across so many PC gaming verticals, you can certainly bet that this dragon will soar even higher.