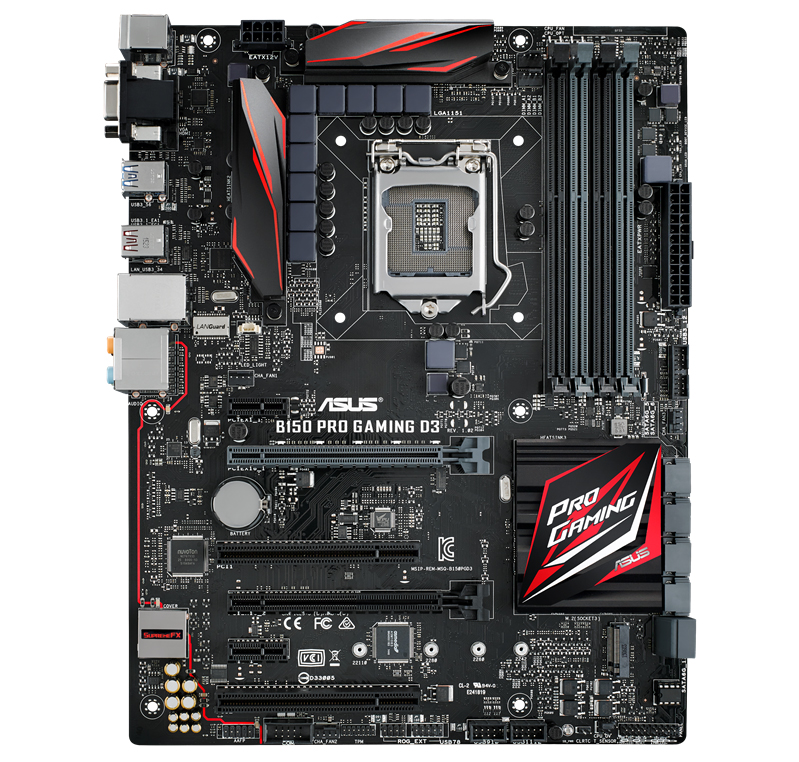 The Skylake platform is booming

Intel Z-class chipset based motherboards (such as the Z170) can be pricey, and not everyone needs the entire feature set they offer. If you want to take advantage of the new sixth-generation Intel Skylake CPUs and just want to pay for what you need, you’re in luck now.

Following the official launch of a massive number of Skylake processors, several of the major motherboard brands have now released entire fleets of other Intel 100 series boards, including H170, H110, and B150 boards, so you should be able to find a board that provides the best bang for your buck.

With scaled-back features like fewer SATA ports and no overclocking support, the more mainstream and business-oriented Intel 100 series chipsets focus on delivering the essentials to casual users and businesses. Other things to expect include variants of the same board that differ only in their support for either DDR3L or DDR4 memory.

ASRock has rolled out a full slate of H170, H110, and B150 boards spanning the mini-ITX to ATX form factors, including a handful of gaming-oriented boards in ASRock’s Fatal1ty series. Clearly, gaming isn’t the sole prerogative of the Intel Z170 chipset.

The ASRock Fatal1ty H170 Performance sits at the top of the lineup. But because the H170 chipset does not support unlocked -K suffix processors for overclocking, some of the motherboard’s components like the power delivery system have been scaled back to keep costs down. 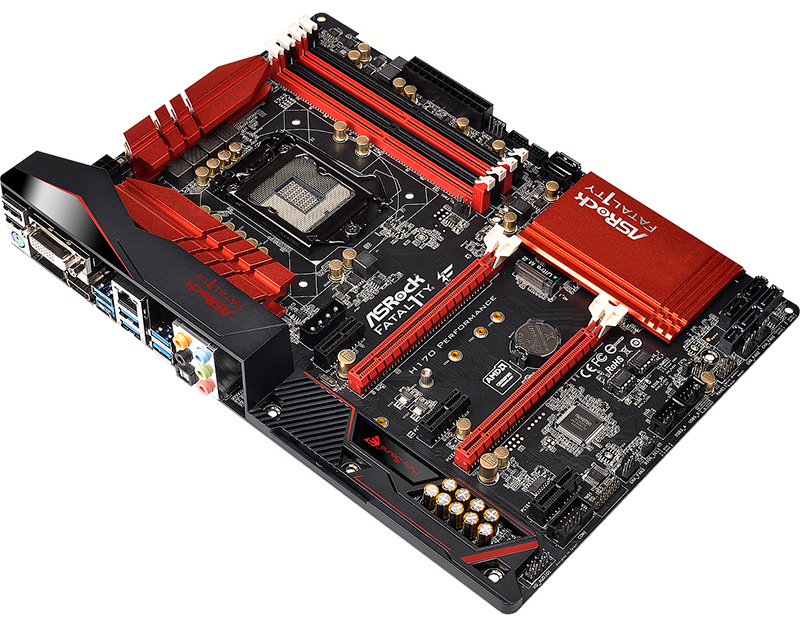 For instance, it’s lacking the beefed-up 60A power chokes on the Z170 Gaming K6+, and sports a 10-phase power design instead of the 12 on the latter board. However, a decent selection of features has still made it over, including the XXL aluminium alloy heatsink, an I/O shield, and a PCIe 3.0 x4 M.2 slot.

For non-gamers, a particular segment of ASRock’s boards stands out because of their ability to accept both DDR3 and DDR4 RAM. The memory slots are keyed differently for both memory types, so this is actually quite a big deal because it means that you’ll be able to re-use DDR3 memory from your old system. And given that DDR4 is still quite expensive, the option to recycle their RAM should appeal to budget-conscious users who are looking at Intel’s lower-end 100 series chipsets. On the other hand, DDR4 support means that users will still retain the option to upgrade to higher-performing memory if they wish.

If you are thinking of recycling your old memory, take note that Skylake supports lower voltage DDR3 modules such as those that confer to the DD3L specs. As long as your DDR3 memory modules can operate at a lower voltage range that's similar to DD3L, you should have no problems using them (most of the recent non-overclocking DDR3 memory modules that run at 1.5V or less should qualify).

ASRock has announced four such “Combo” motherboards – the H170 Combo, B150 Combo, B150M Combo-G, and the H110M Combo-G. As you may have guessed, the two with the -M suffix are micro-ATX boards, while the others are ATX offerings. 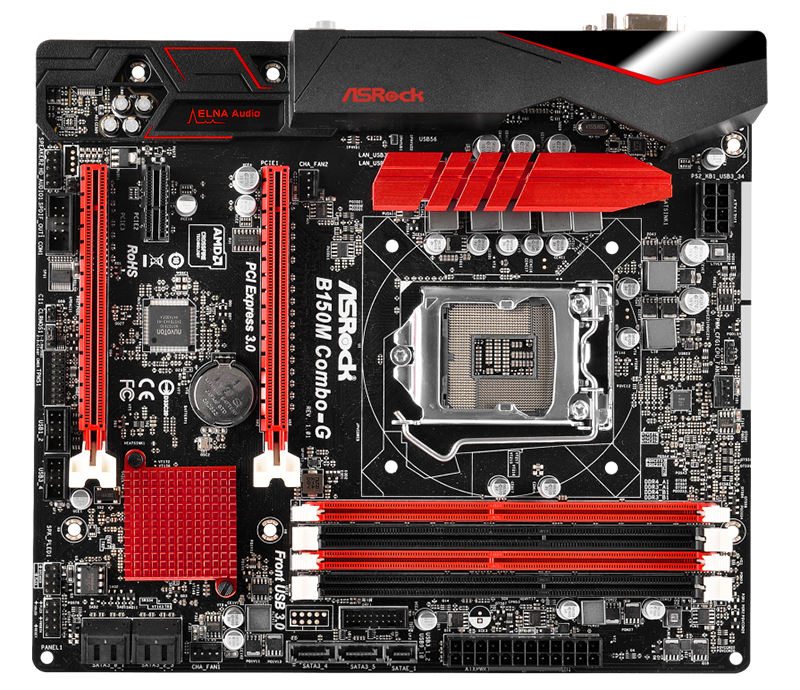 The remaining ASRock boards offer varying combinations of storage options and support for either DDR3/DDR3L or DDR4 RAM. Boards with the “/D3” appended to their names will support DDR3 memory only, and this naming methodology is also used by other board manufacturers.

This new wave of ASUS motherboards hews to similar categories as its Z170 boards. Republic of Gamers (ROG) branded boards are understandably missing, but there are boards in the Signature, The Ultimate Force (TUF), and Pro Gaming lineups.

The case-mounting holes on the motherboards have even been cleared of components, thus minimizing the risk of damage and short circuits caused by contact.

The ASUS H170-Pro is the flagship board in the Signature series, complete with DDR4 support and USB Type-C connectivity. It comes with ASUS’ 5X Protection II hardware safeguard features including overvoltage and overcurrent protection for chipset components and the DRAM, digital voltage regulation, a stainless steel rear I/O panel, and a LANGuard EMI cover for a more reliable network connection. 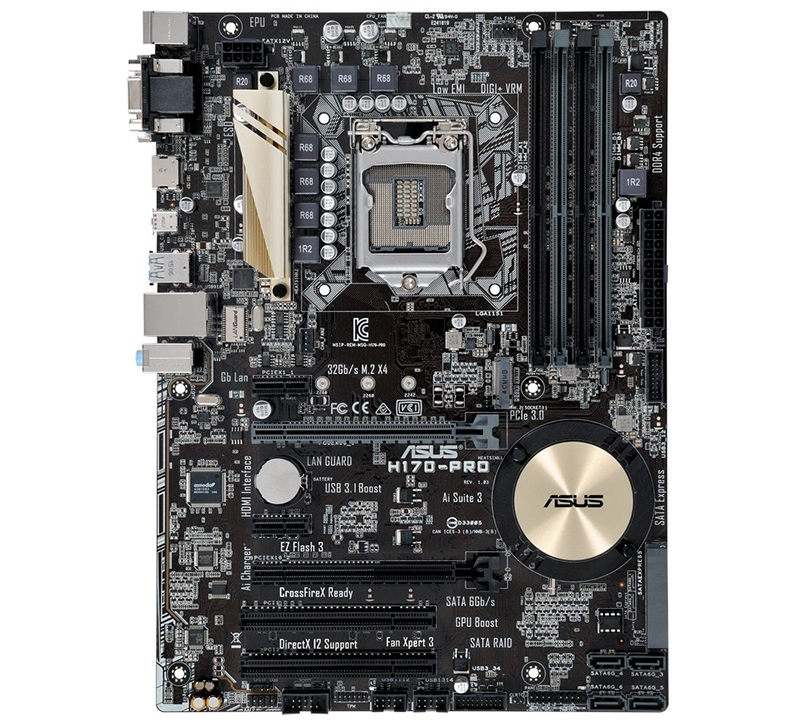 As expected, the TUF motherboards have been designed with durability in mind. TUF Trooper boards are intended to be a more affordable entry point into the series, so ASUS has attempted to preserve the key focus on stability and reliability while stripping away extraneous features. According to ASUS, the boards continue to undergo rigorous testing for reliability and include features like TUF ESD Guards 2 to protect ports against electrostatic discharge and TUF Thermal Radar Core, which offers control over individual system fans.

The Trooper B150 D3 is an entry-level ATX board in the TUF series. It lacks the Thermal Armor found on boards like the Z170 Sabertooth Mark I, but it does come with the aforementioned TUF features for improved reliability, protection against electrostatic discharge, and temperature control. 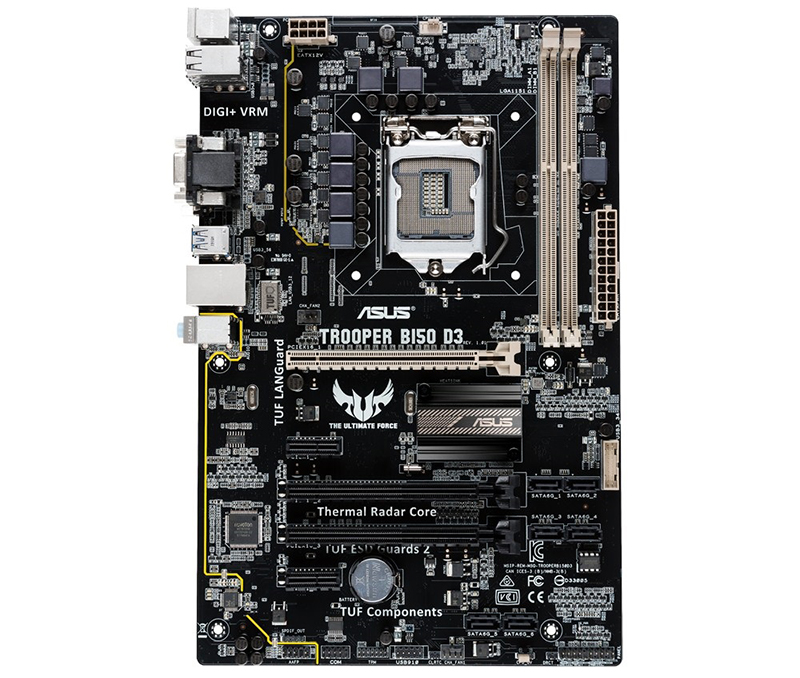 The D3 suffix also means that the board supports only DDR3/DDR3L memory, so you’ll be able to re-use the memory from your old system. However, do note that it has only two DIMM slots for a total of 32GB of RAM - that is if you can afford to stock it with expensive 16GB memory modules.

The audio shielding traces are backlit to further jazz up the board’s aesthetics.

The H170 Pro Gaming shares many features with its Z170 counterpart, including a single M.2 slot that supports both SATA and PCIe devices. However, it will only support DDR4 RAM up to 2133MHz and lacks support for NVIDIA SLI. 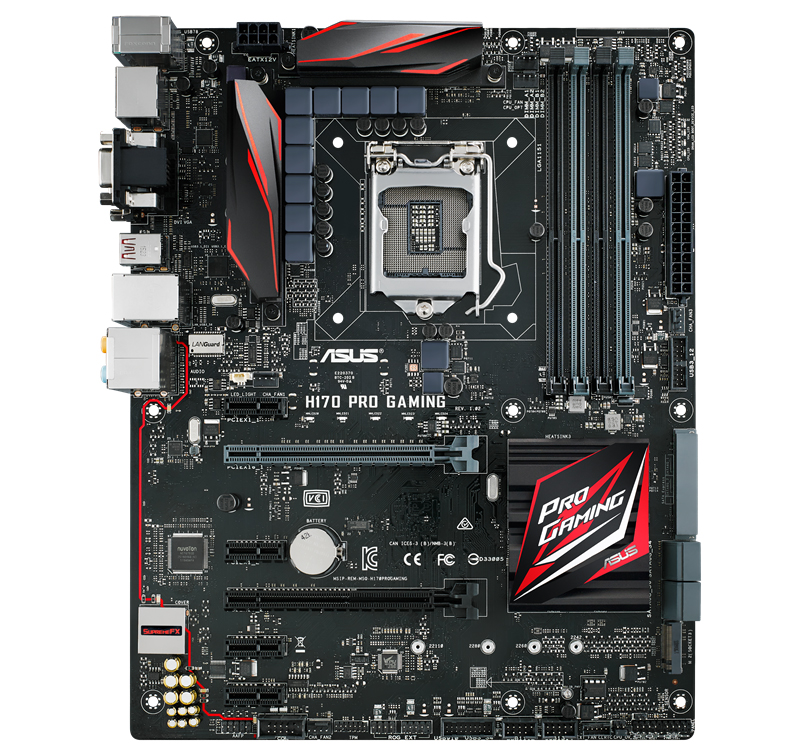