We begin with our performance analysis by looking at the two routers’ results on LAN Speed Test. Uplink speeds were almost on a par with each other and were also comparable with other high-end dual-band and tri-band routers. Certainly, the two routers’ uplink numbers were amongst the highest and were bested only by the Linksys WRT1900AC.

We saw some differences in downlink performance, with the Nighthawk X8 recording better performance at the 5 and 13 meter ranges. At 13 meters especially, the Nighthawk X8 was 10% faster than the RT-AC5300. However, the ASUS router made a stunning back at our farthest range of 17 meters where it posted a high of 155.21Mbps, a good 21% greater than the Nighthawk X8. As for comparisons with other high-end routers, we can safely say that the two routers performed up to expectations, though they couldn't really shake off  the Linksys WRT1900AC that consistently performed better at all of the tested distances. 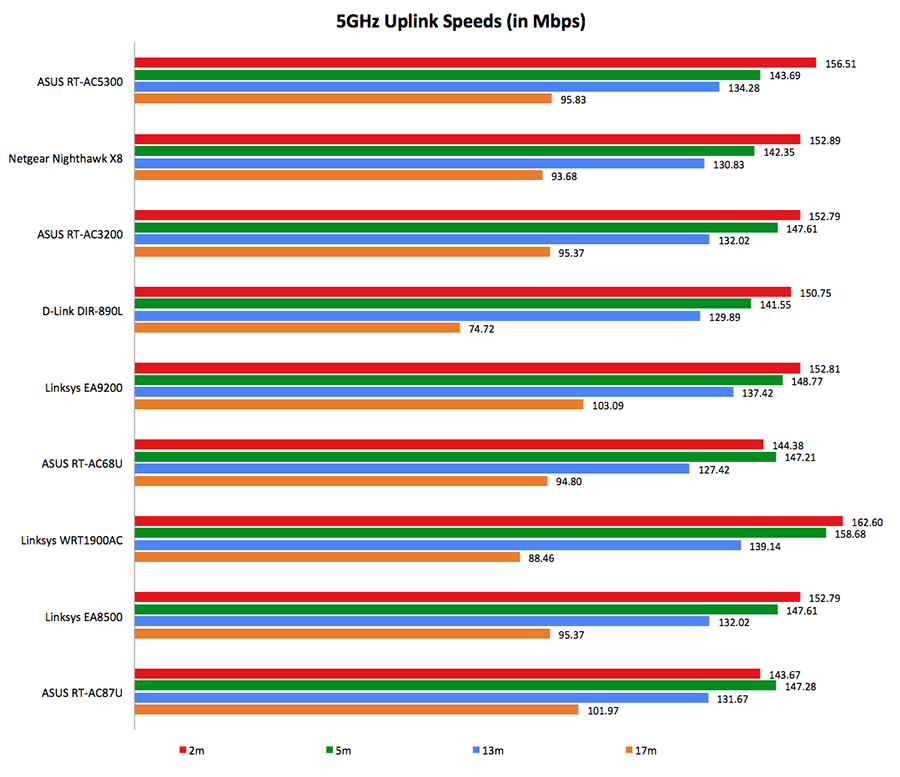 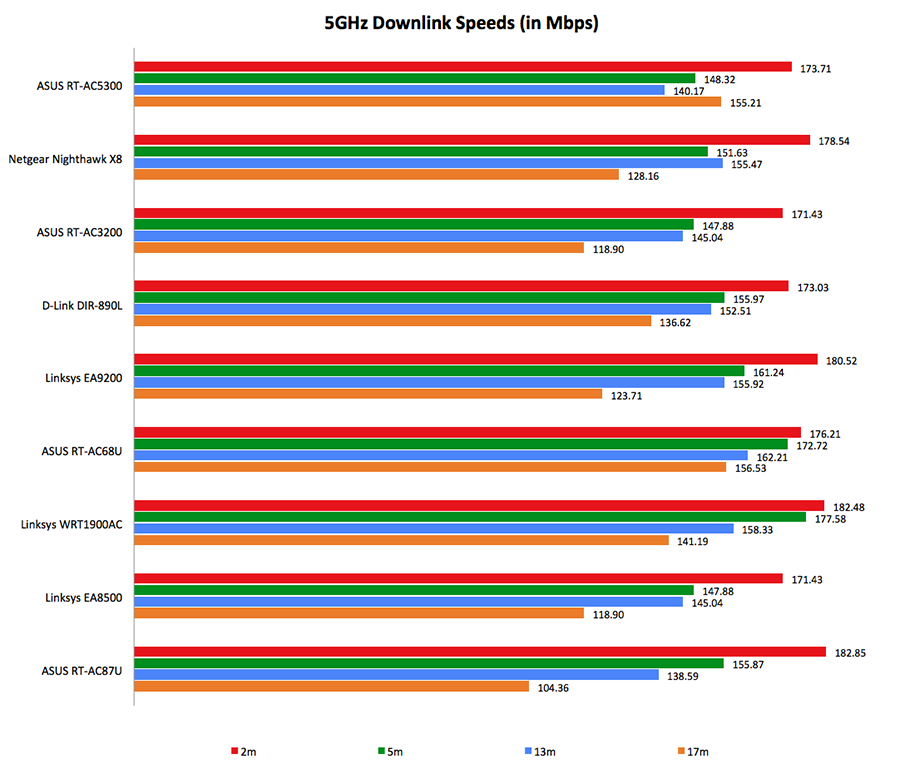 In our file transfer test, here's where things really get interesting. The RT-AC5300 router from ASUS was clearly the stronger performer. It maintained minor leads over the Nighthawk X8 on the 2, 5 and 13 meters ranges, and stormed ahead at 17 meters with a speed of 186.05Mbps - the highest we have ever recorded, and a good 25% quicker than the Nighthawk X8. 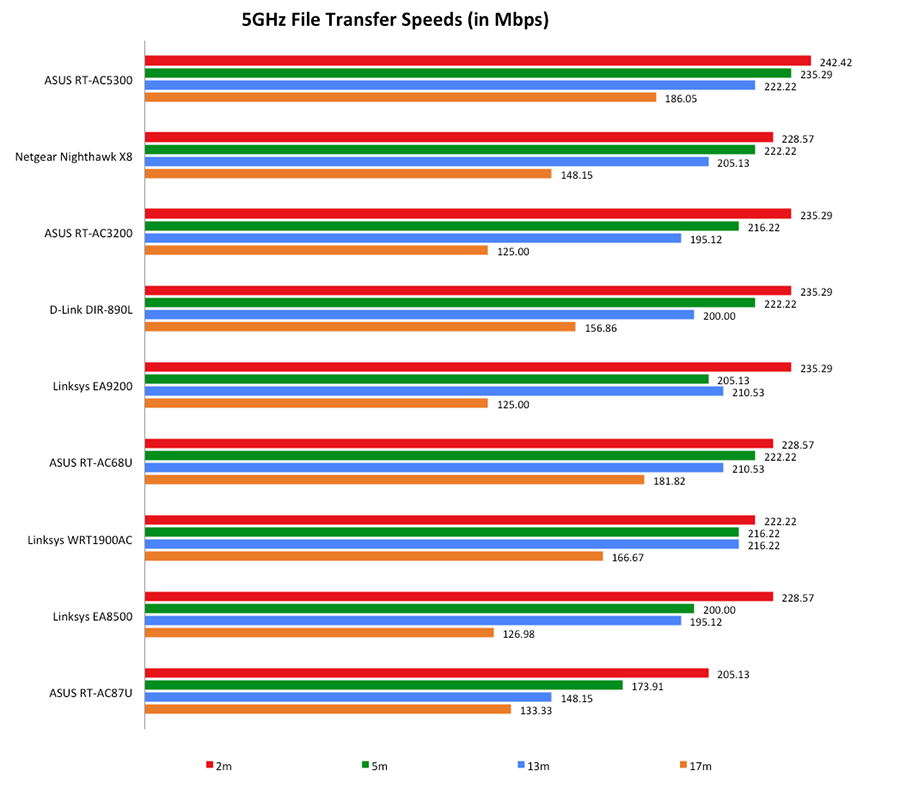 In our performance load test where we had two devices connected to one of the 5GHz bands each, we noticed only a very slight drop in performance in the two routers. However, the RT-AC5300 router was still comfortably quicker than the Nighthawk X8.It recorded speeds of 228.57Mbps, the highest we have ever attained and which represented an advantage of over 14% over the Nighthawk X8. We can also see here that the tri-band routers were miles ahead of the dual-band routers. Clearly, tri-band routers are more suited for homes with multiple connected devices - at least until MU-MIMO becomes a mainstay. 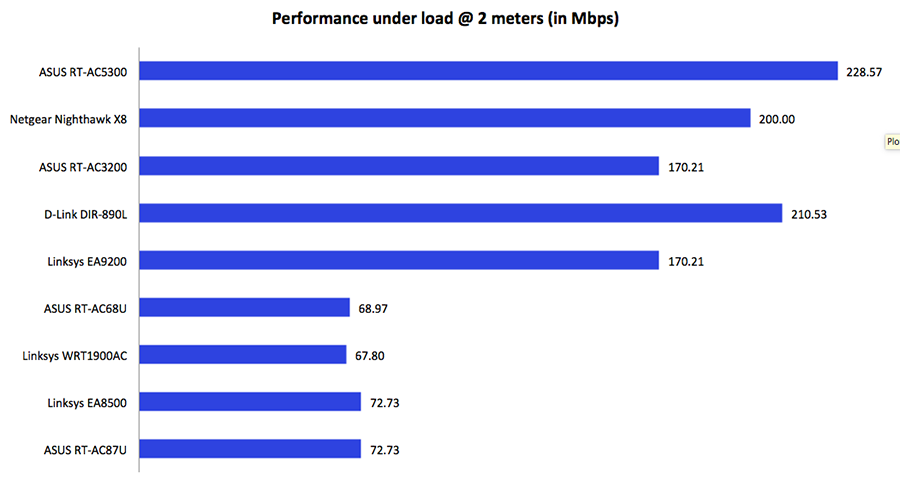 There are two key takeaways from the results that we see earlier. Firstly, the newest flagship routers from ASUS and Netgear are both speed demons. Looking at the results, we can see that they are very competitive and comparable to the current crop of flagship tri-band and dual-band routers.

But secondly, and perhaps more importantly, another thing to note is that though these routers support much higher speeds, these speeds cannot be attained without the right client device. As our tests clearly demonstrate, speeds are capped by our AC1200 USB adapters. As it is, there are actually very few devices that can even fully support the 1300Mbps speeds that older AC1900 class routers offer, much less the 1733Mbps and 2150Mbps speeds that the latest AC2400 and AC5400 class routers can offer.

Most smartphones and tablets only support up to 433Mbps or 867Mbps, while the 13-inch MacBook Pro with Retina Display remains to be the only notebook we have tested that has a wireless adapter that supports three streams and 1300Mbps. Speed aside, there are also precious few devices that support MU-MIMO technology. These are things that prospective users need to keep in mind when considering these new routers.

As a result, these routers can be thought of in two different ways. The first is that they represent the cutting-edge in wireless technology and that they are future-proof. The second is that these routers are overkill and mostly unnecessary given the limitations of today’s devices.

That said, these routers are not without their advantages. Surely, they are a step up from existing AC3200 routers in that they can support the latest 4-stream devices. Furthermore, both ASUS and Netgear have introduced new features on these routers that may be worth a look for more hardcore and extreme users. 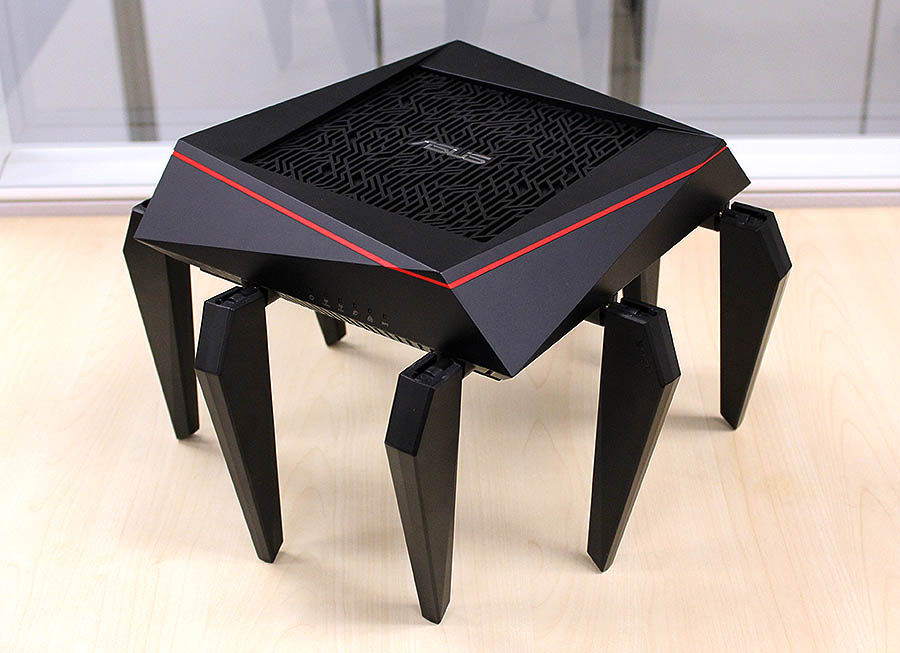 We begin with the ASUS RT-AC5300 router, which finally includes remote router management. This was a feature sorely missing on its older routers and it’s good to see that ASUS has finally addressed this shortcoming. The implementation via four mobile apps is a little cumbersome, but it’s a step in the right direction. Furthermore, the RT-AC5300 router has other features such as GameBoost and AiProtection that adds even more value for users. As it is, the RT-AC5300 is easily one of the most feature-packed routers you can buy today. Adding to that, we found its performance outstanding, especially at range. Maybe those 8 external antennas aren’t just for show after all.

However, the RT-AC5300 router is not without its flaws. Most of all, we would have liked to see more LED indicators for the Gigabit Ethernet LAN ports. As it is, there’s only a single LED indicator on the front for these ports. Even the ports themselves lack indicators. This could be problematic when trying to troubleshoot the router should there be any connection issues. Also, ASUS could really have streamlined their mobile apps offering. Right now there are a total of four different apps for different purposes. A single app that does it all would definitely be a much more elegant solution.

You’d be right to expect the RT-AC5300 router to command a high price. It has a sticker price of S$469, a good S$60 more than the launch price of the older RT-AC3200 router. However, we are not quite sure the premium is worth it. This is mostly because most of its performance gains cannot be appreciated by devices right now. Plus, some of these features such as remote router management via the ASUS Router app is also being retroactively offered on older routers such as the RT-AC3200 and the RT-AC68U, and even really old routers like the RT-N56U. As a result, you don’t need the latest router to enjoy these new benefits. Nevertheless, its interesting design and other features like support for port aggregation might be enough to entice users, especially those looking to upgrade from an older dual-band router. 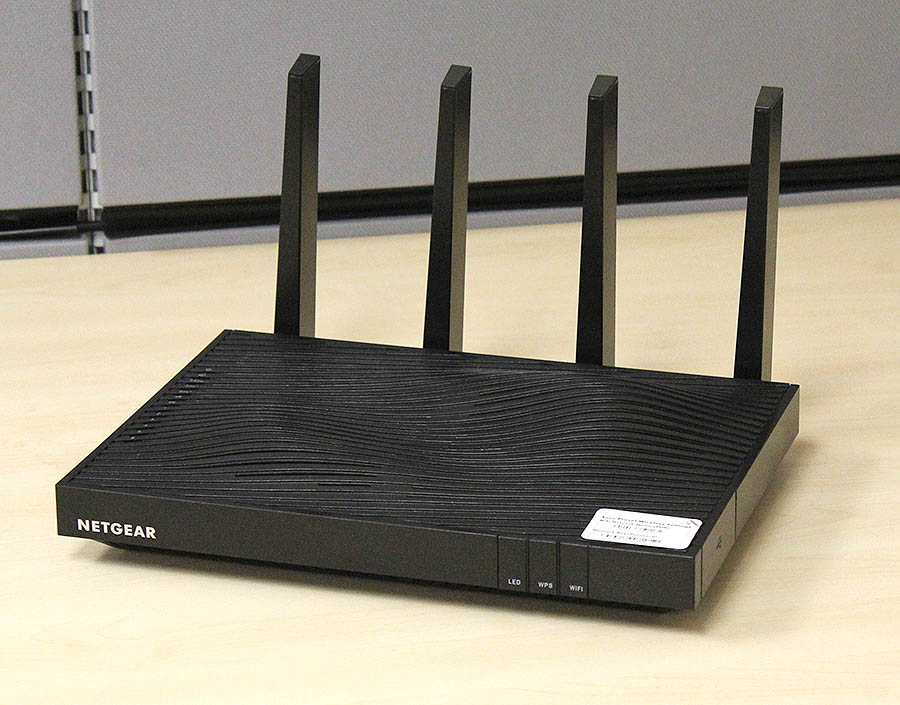 The Netgear Nighthawk X8 has decent all-round performance, but it is overshadowed by the monstrous RT-AC5300 router. We had expected better performance at range from the Nighthawk X8 since Netgear claims that its active antennas would allow its router to produce stronger and cleaner signals, but we didn't manage to experience that. That said, its performance wasn’t bad at all; it just wasn’t as good as the ASUS RT-AC5300 router.

On the flip side, what we like about the Nighthawk X8 is that it is the first high-end router to offer more than just four Gigabit LAN ports. Given today’s increasingly connected homes, this move is long overdue. Plus, two of these ports support port aggregation, which would definitely be a welcomed feature to users with enthusiast-grade NAS systems.

Sadly, we are afraid it’s all downhill from here. Performance aside, the Nighthawk X8 also loses out in terms of features when compared to the RT-AC5400 router. Though Netgear has added cloud storage functionality to the Nighthawk X8, getting it to work was troublesome. On top of this, the Nighthawk X8’s implementation of QoS and Parental Controls is half-baked and again troublesome to enable.

But most of all, it is the price of the Nighthawk X8 that will put off uses. Indeed, the price of the Nighthawk X8 can be best described as shocking. At S$699, it is the priciest router we’ve ever seen. For this amount of money, you can get an ASUS RT-AC5300 router and still have enough left to purchase a more basic AC1200 class secondary router to expand your network connectivity and range. Or you could buy two high-end AC1900 routers and still have spare change. What we are trying to say is that the Nighthawk X8 is incredibly pricey.

But what’s more damning is that the premium that it’s asking for isn’t really justified. Sure, it’s really fast, but there are routers that are just as fast, if not faster. It’s also outclassed by its competitors when it comes to features and ease of use. And while having 6 Gigabit Ethernet ports is great, it’s far cheaper to get another router and then expand your ports by adding a network switch.

All things considered, the Netgear Nighthawk X8 is a pretty decent router. Unfortunately, it’s priced far too high to be recommended. As for the ASUS RT-5300, it could be a worthwhile investment for users who are upgrading from older Wireless-N or more basic dual-band Wireless-AC routers to fortify and improve your home's networking connectivity and range.