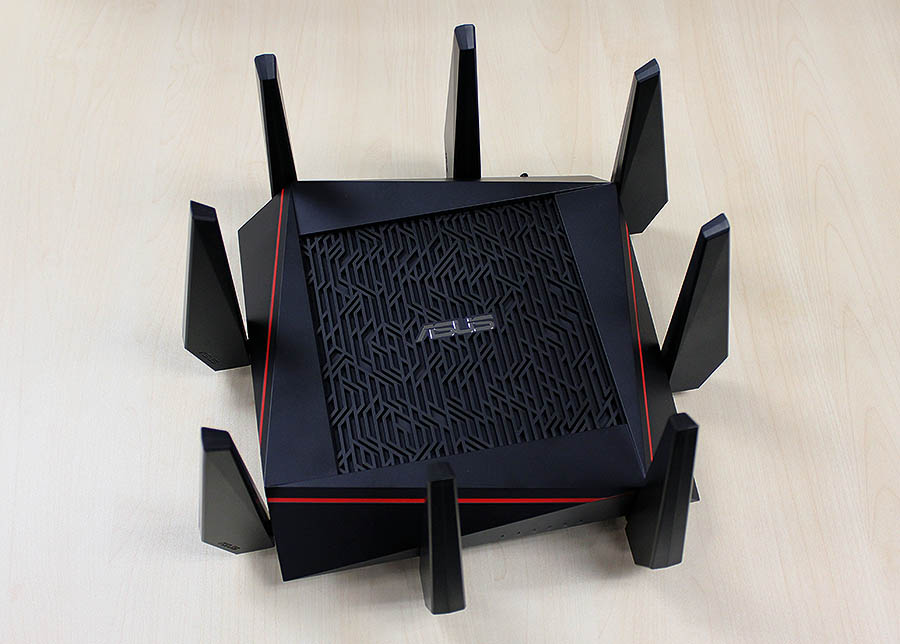 Yeah, we are not kidding. This is how the ASUS RT-AC5300 router looks. Totally bonkers right? The RT-AC5300 router actually debuted a few months ago at IFA 2015 in Berlin, and because of its unusual looks, it has been called an alien, a crab, a spider, amongst many other things. We think that it’s a very fitting design for a high-end flagship router and it looks plain awesome. ASUS could have gone with a simple box-shaped design, but they decided otherwise, and gave the RT-AC5300 router angular surfaces, sharp edges, and red accents. Even the antennas haven’t been spared, and are thick, chunky and angular too. In some ways, the RT-AC5300 router reminds us of Lamborghini’s equally wacky Venono hypercar.

That said, there are some things that prospective owners should take note. Firstly, it’s really large and takes up quite a bit of space. It measures roughly 25cm by 25cm, and the antennas end at around 14cm off the surface. Secondly, there are no provisions for wall-mounting. Not that we would recommend it ourselves, as the router weighs nearly 2kg with all 8 external antennas attached. 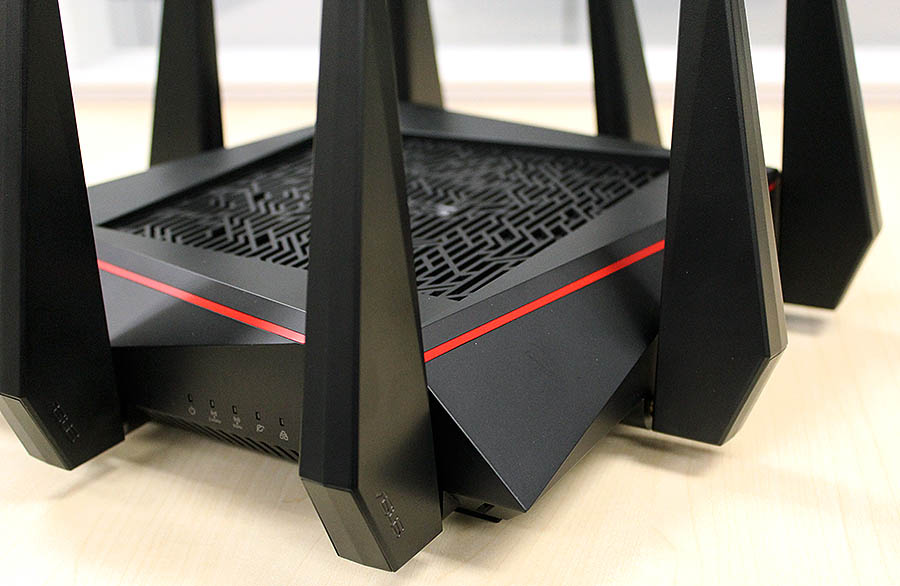 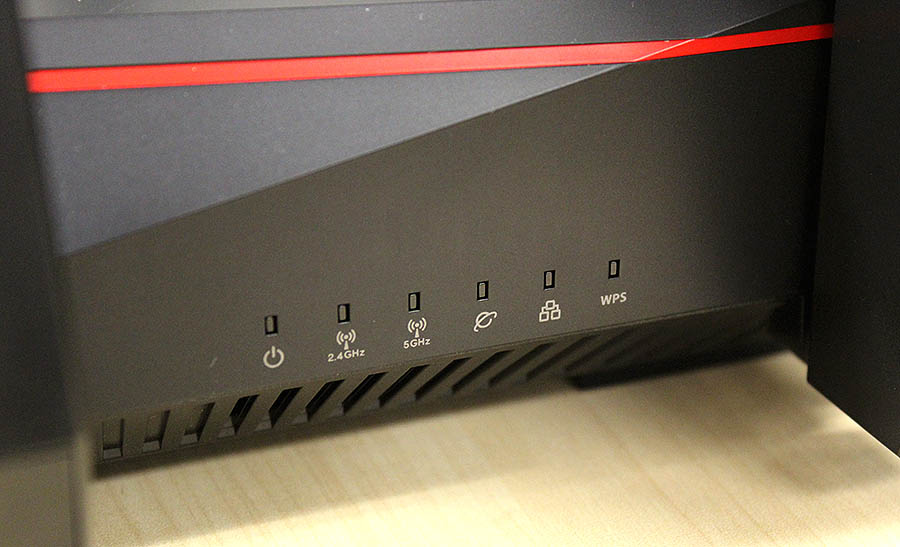 Interestingly, the top panel features an interesting tribal-like pattern and isn’t actually really vented. The vents for warm air are actually located at the sides of the router. Looking at the sides and round the front, users will be able to find LED status indicators. One thing that we would have preferred is to have LED status indicators for each of the individual Gigabit Ethernet LAN ports. As it is, there's only a single indicator for all four of them, which isn't very helpful if you are trying to determine which is the faulty port. 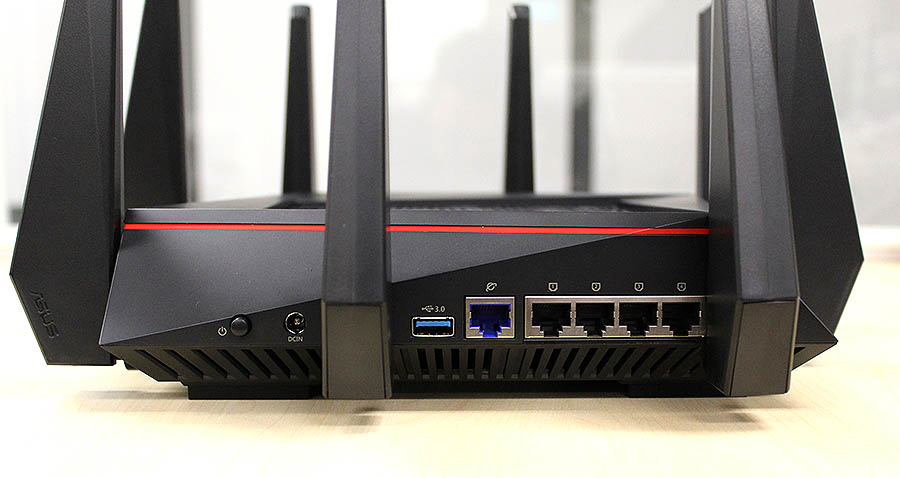 And round the back are the usual single Gigabit WAN Ethernet port and four Gigabit LAN Ethernet ports. What’s more, the first and second LAN port support aggregation, which means that they can be combined to form a single super-fast Ethernet connection. Of course, this requires a client that can support this feature and there are a handful of enthusiast consumer NAS, like the recently announced Synology DiskStation DS716+ that does. However, given that there are only four Ethernet LAN ports, doing so will leave you with just two ports. Note that the WAN and LAN ports all do not have LED indicators, which can be a problem for users if they need to troubleshoot connection issues. Lastly, there’s also a single USB 3.0 port next to the WAN port which can be used for connecting to an external storage device for wireless backups and easy file sharing.

Turn to the left of the router and users can find an additional USB 2.0 port, which we recommend using to connect to less performance sensitive devices like printers for print-sharing. Here is where you will also find the buttons to turn off the LED status indicators and wireless networks, and also the WPS setup button. 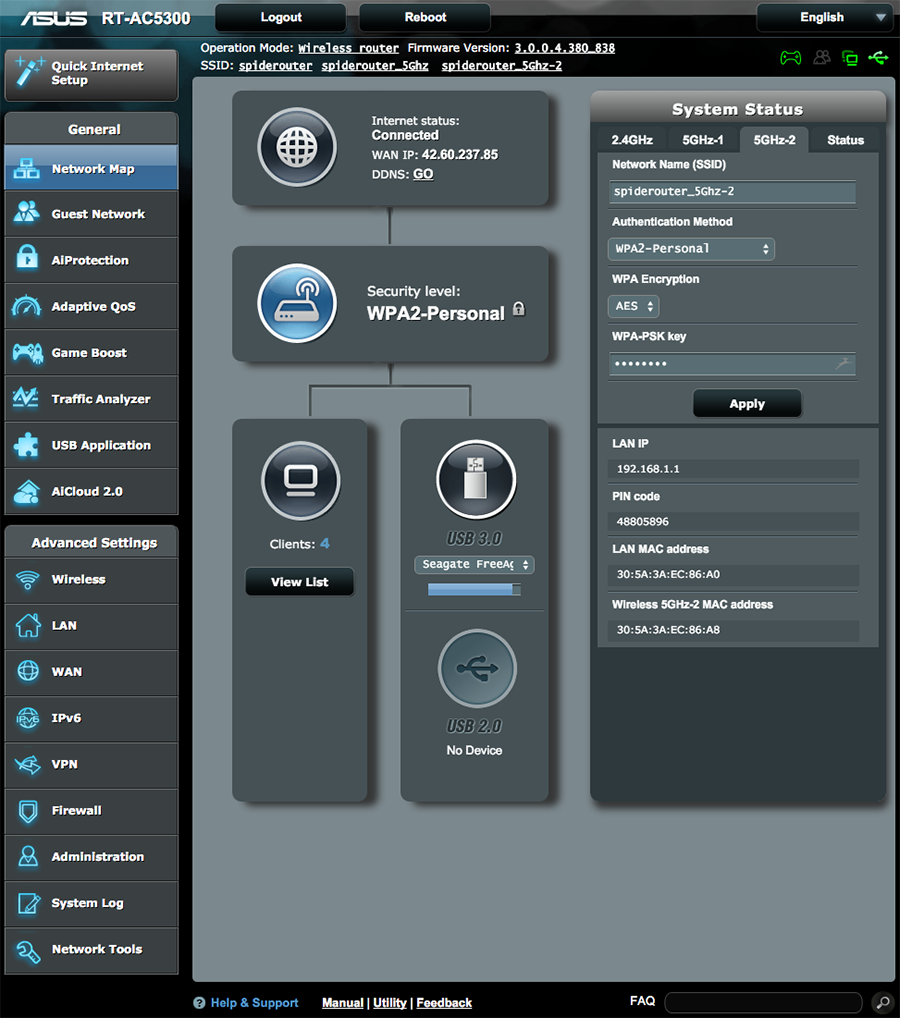 Setting up the ASUS RT-AC5300 router was a cinch thanks to the now familiar ASUSWRT setup interface. Admittedly, it’s not the prettiest looking, but it’s straightforward enough to use, loads quickly and gets the job done. We like how it provides a good balance between ease of use and options for more advanced users. For advanced users, options like port forwarding, VPN, guest networking and more are all here.

Furthermore, it is also the most feature-packed amongst all brands. All the new features that were introduced on the older RT-AC3200 router are all present here: Adaptive QoS, AiCloud 2.0, AiProtection and Traffic Analyzer.

Adaptive QoS is a form of QoS that adapts dynamically based on usage scenarios and network workloads. AiCloud 2.0 is ASUS’ second-generation cloud storage utility. Users can connect external storage devices to the router and access them remotely from anywhere in the world using an accompanying app on their smartphone or tablet. AiProtection is a built-in anti-spyware and anti-malware utility that actively scans incoming packets of data. Finally, Traffic Analyzer lets users track and analyze their traffic usage on a daily, weekly or even monthly basis. It also shows real-time traffic usage. 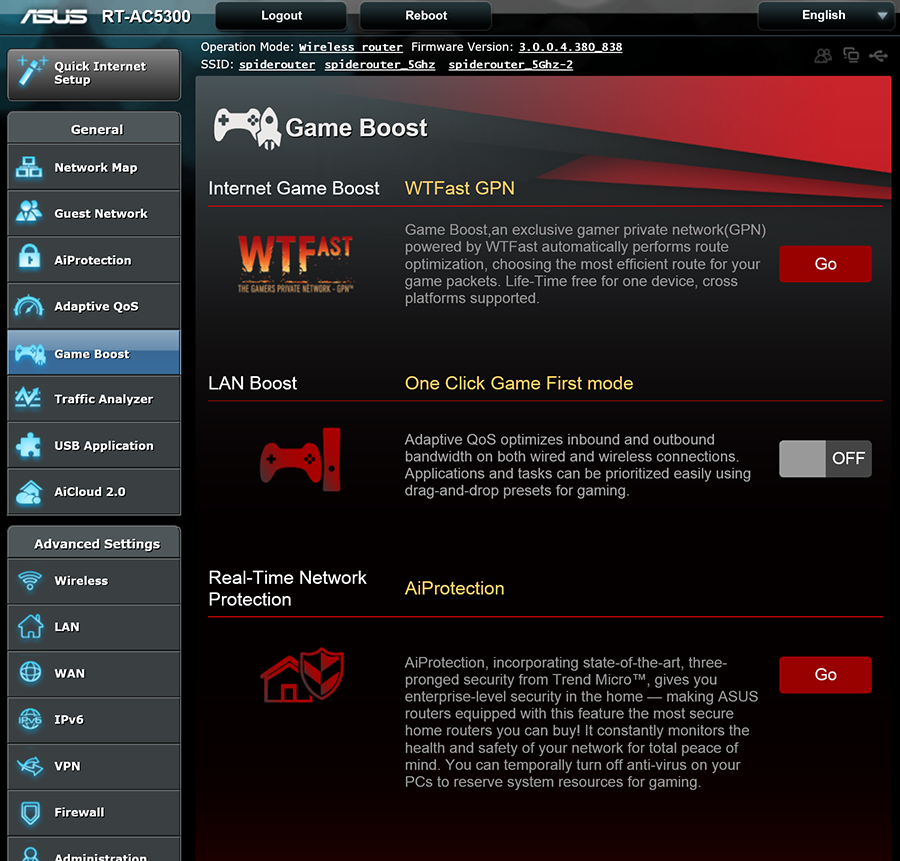 However, the new RT-AC5300 router has more tricks up its sleeves and it features something called Game Boost. There are two components to Game Boost - LAN Boost and WTFast GPN. LAN Boost is a bit of a misnomer because activating it automatically alters the Adaptive QoS rules to prioritize gaming connections on both wired and wireless connections. WTFast GPN essentially gives owners of the router a free lifetime subscription to the WTFast GPN (Gamers Private Network) service, which is a VPN for gamers.

One of the things that ASUS was lacking in the past was that its routers could not be remotely managed. That has all changed recently after ASUS unveiled four new mobile apps that will allow owners to remote control and manage their routers. There’s ASUS Router, AiCloud, Download Master and Device Discovery, and each app has its own specific purpose. 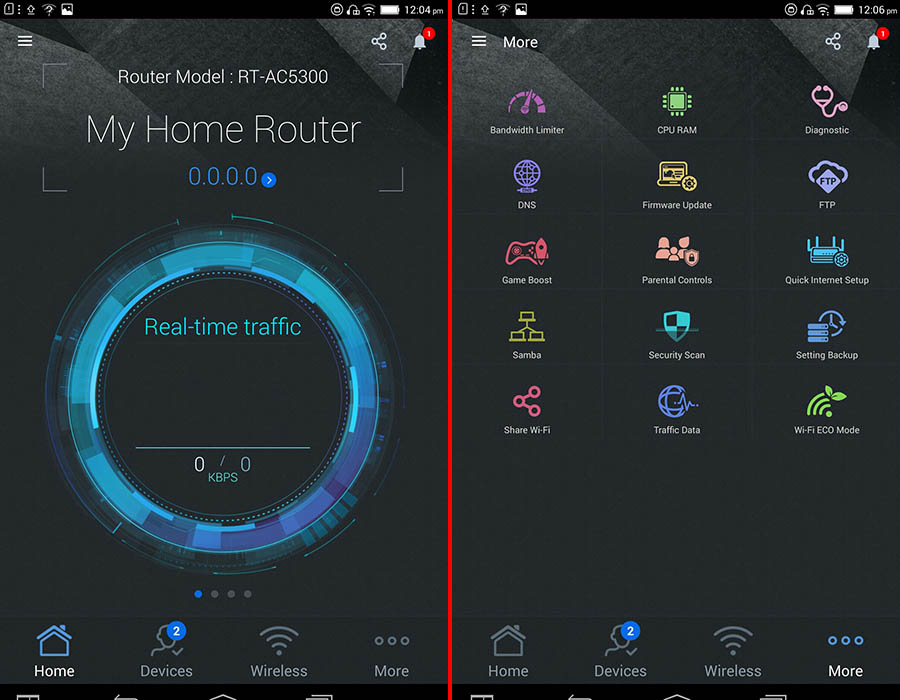 For example, the ASUS Router app lets you monitor router usage and alter QoS settings. The AiCloud app is required if you want to enable cloud storage functionality. The Download Master app lets you schedule files for download using torrent clients. And lastly, Device Discovery traces all your ASUS networking devices, including your router, repeater and IP camera. The apps are easy enough to use, but it’s a cumbersome system and we would rather have had a single app that can do it all. An important thing to also note is that the apps are available only for Android devices now. iOS users will have to wait a little longer as they are currently under review by Apple.

Lastly and perhaps most importantly, the RT-AC5300 router also features Tri-band Smart Connect, which automatically assigns connected device to the best available band. This is similar to other Smart Connect technologies from rival routers. However, unlike, say Linksys’ Smart Connect technology which broadcasts its twin 5GHz networks as a single SSID and its 2.4GHz network as a separate one, the RT-AC3200 router goes one step further and can broadcast all three of its 2.4GHz network and twin 5GHz networks as a single SSID when its Tri-band Smart Connect technology is enabled. This makes it especially easy for less tech savvy users since everything is taken care of by the router. However, this also means that devices can sometimes suffer from drops should the router decide that it needs to move devices around on its Wi-Fi network to maximize performance. Advanced users who want to manage the way devices connect to the router manually can choose to configure the RT-AC3200 router to broadcast three separate networks.