An introduction to AC5300

Note: This article was first published on 3rd December 2015.

An introduction to AC5300

Routers are getting faster than ever, and that’s progress for you. In fact, they are getting ludicrously fast. Just two years ago, we had the first AC1900 class routers hit the shelves. And then in the past 12 months we saw the first AC2400 and AC3200 routers arrive as well. And now we have AC5300 class routers in the form of ASUS' new RT-AC5300 and Netgear's new Nighthawk X8. 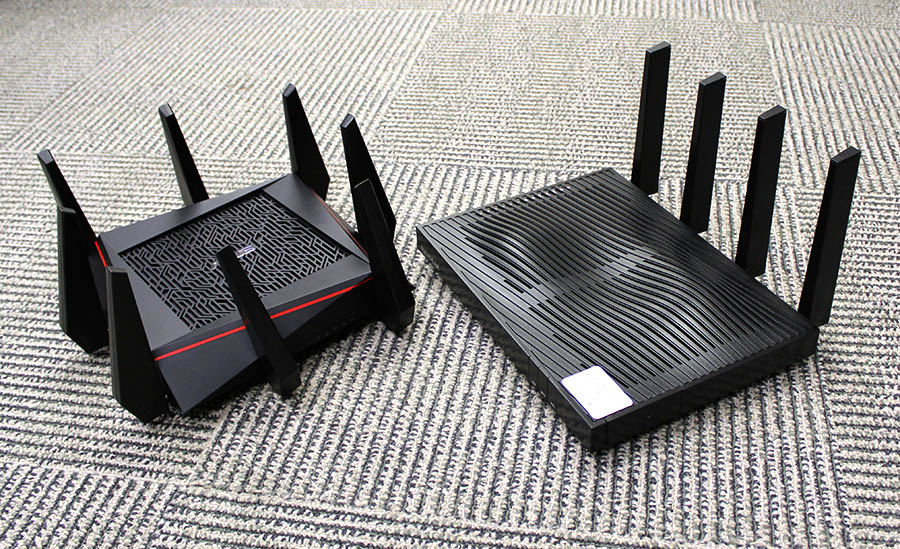 Internally, these routers are very similar in that they are all based on Broadcom’s new 4x4 5G XStream platform, so it’s probably apt that we talk about this new chipset now. This new platform is the successor the 5G XStream platform found in the Netgear Nighthawk X6. It is tri-band capable and supports up to four spatial streams, allowing it to provide even greater overall bandwidth. The ASUS RT-AC5300 and Netgear Nighthawk X8 routers are both powered by this new platform. 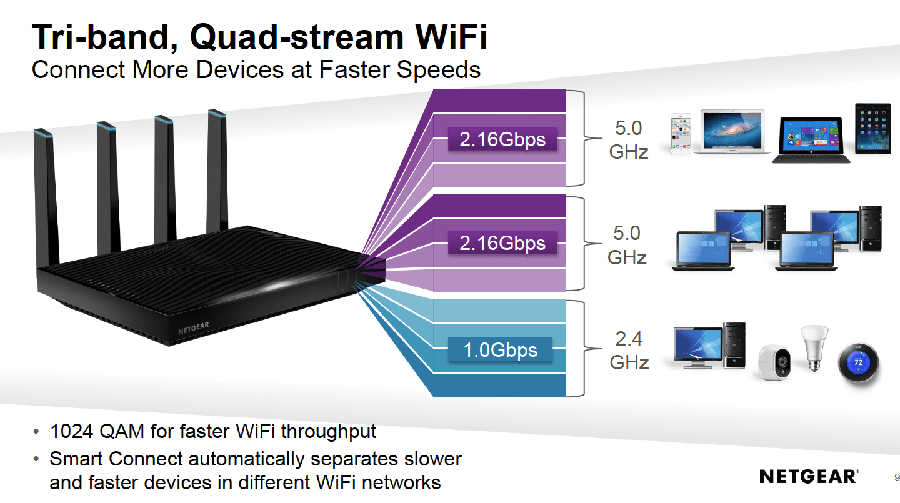 So how did we arrive at 5300Mbps? AC5300 class routers are tri-band capable which means that they broadcast a single 2.4GHz network and two 5GHz networks. And because this new Broadcom platform supports four spatial stream and a new Broadcom technology called NitroQAM, which increases the maximum bandwidth of each stream, the 2.4GHz network now supports a maximum throughput of 1000Mbps. On the 5GHz network, because of NitroQAM and the fact that it supports up to four streams, total bandwidth has been boosted to 2150Mbps. Take this number and multiply it by two (because there’s two 5GHz bands) and add 1000Mbps from the 2.4GHz band, and you get 5300Mbps. This is all very amazing especially when you remember that your Gigabit Ethernet connection is “just” 1000Mbps.

Powering all this is Broadcom's new 4x4 5G Xstream platform which consists of a 1.4GHz dual-core BCM47094 ARM Cortex A9 processor and three BCM4366 4x4 radios. These radios are also MU-MIMO capable, so if you have the right client devices, you can expect an overall network performance boost too. For those unfamiliar with MU-MIMO, it’s worth reading our review of the Linksys EA8500 router first - it was the first router to support MU-MIMO out of the box. But very briefly now, it’s a technology that enables more efficient use of a router’s available bandwidth by allowing it to transmit data to multiple devices simultaneously. Since these AC5300 routers broadcast three networks, along with MU-MIMO, they can potentially transmit data to up to six devices simultaneously.

However, it's important to note that at this point there are very few client devices that actually support MU-MIMO. The technology promises to greatly improve overall performance, but biggest downside to MU-MIMO is that it requires clients to support it too, and it is not just a matter of a simple patch or firmware update. This means that few existing devices will support MU-MIMO unless they were already equipped with the latest wireless adapters. Some examples of devices that claim to support MU-MIMO at this point are Xiaomi’s Mi 4i smartphone and Acer’s new E series notebooks.

Since the two routers are powered by the same platform. These technologies that we have mentioned are found in the both of them. Final performance of the routers will ultimately depend on their design and firmware implementation. With all this out of the way, let’s take a look at each of the routers themselves to talk about their design, features and ease of use.