A Modern Internet Explorer 10 for Windows 8

A Modern Internet Explorer 10 for Windows 8 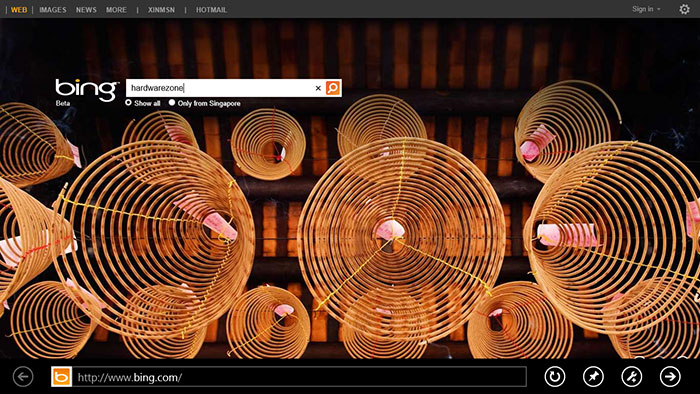 Internet Explorer, Microsoft's very own Internet browser, and one of the most widely used browsers today, has been the butt of many a joke on the Web for an inordinately long time, with many poking fun at it for its sluggish performance and various security vulnerabilities. But what was the last version of Internet Explorer that you've actually used? Are you just buying into the idea put forward by the hive-mind without using your own discretionary abilities? Perhaps the release of Windows 8 is the best time to give the much maligned browser another shot before you head out and start installing alternatives.

On to its tenth installment now, Internet Explorer 10 (IE10) has been specifically optimized for performance with Microsoft’s new operating system. What's different this time round is that there are two versions of IE10 running on the same OS. There's a standard desktop app and a Modern-style, touch-focused app. Users can switch between the two as and when they please.

In terms of looks and aesthetics (and even the workings), Internet Explorer 10 for the desktop is a spiritual successor to Internet Explorer 9. So for this article, we will focus our attention on the Modern-style version of IE10. In our previous article, we talked about the some of the key Modern-style apps in Windows 8. IE10 has also gotten the Modern UI treatment, and has its own app for the Modern environment. In Microsoft's own words, the Modern-style IE10 "puts the focus on the web, not the browser." And it's not hard to see why.

For a start, IE10 offers edge-to-edge browsing by having the webpage take up the whole screen. If you thought browser design couldn't get any more minimalist, this version of IE10 will prove you wrong. And like all the other Modern-style apps, it works best if you've a touch-enabled device: you can tap to open a link, pinch to zoom into an image, and flick to scroll through webpages. But credit to Microsoft, despite its focus on touch, we found it to work reasonably well with a traditional keyboard and mouse.

To reveal app commands and other controls, just swipe in from the top or bottom edge of the screen. (To learn more about the common touch gestures in Windows 8, and their keyboard and mouse equivalents, check out this article.) You'll see a bar at the top that contains all your opened pages. To open a new blank page, tap the '+' button. The 'More' button (the one with three horizontal dots) will reveal two additional options: to close all other tabs except the page that you're on, and to create a new InPrivate tab. The latter is a feature that's also present in the desktop version of IE10. Basically, it's a privacy mode that lets you surf the Web without leaving a trace. Information such as webpage history, form data and passwords, and address bar info aren't stored. The same goes for cookies and temporary Internet files at the end of each InPrivate browsing session.

For keyboard warriors, here are a few keyboard shortcuts to manage tabs:- 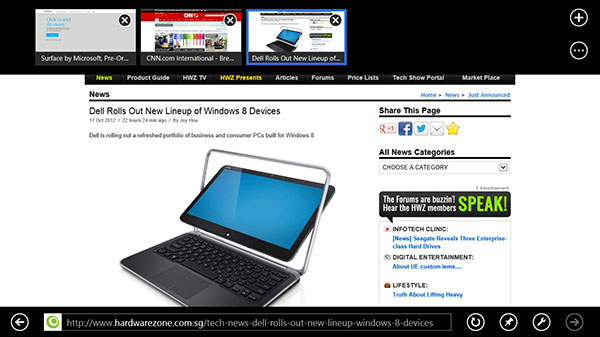 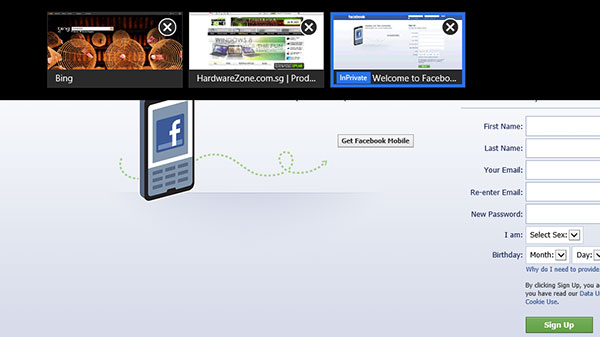 Unlike what you're usually accustomed to, the navigation bar is now located at the bottom. Fortunately, you've the usual forward, back, and refresh navigation buttons. You can also pin a webpage to the Start screen, or add it to your favorites list via the 'pin' button that's also on the navigation bar.

A few more interesting options are revealed when you click on the Tool icon. You can search for specific text on a page, or request to view the page on the desktop version of IE (especially when you come across a page that doesn't work properly in the Modern-style version of IE10 due to a lack of plug-ins). In addition, there's a 'Get app for this site' option. Essentially, what it does is it lets you know if the website that you're surfing on has an app. If it does, hitting the button will bring you to the Windows Store to download the app. 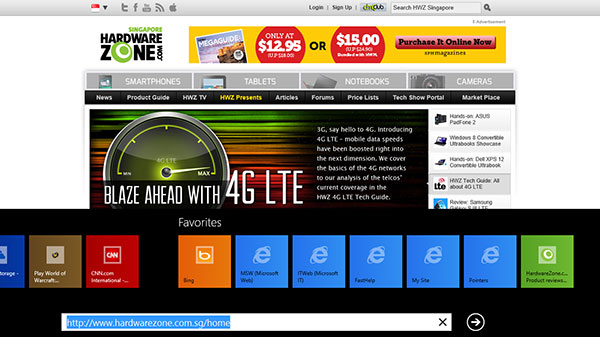 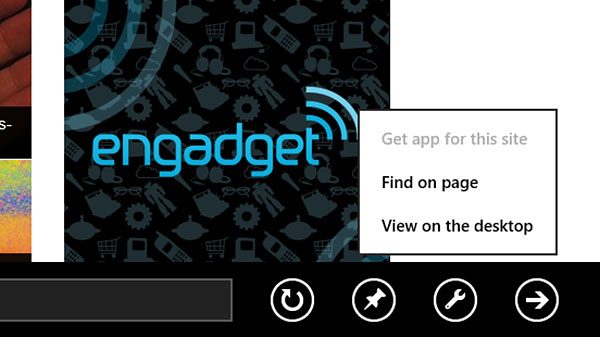 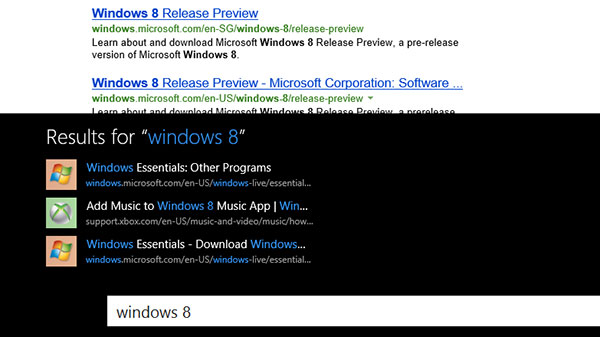 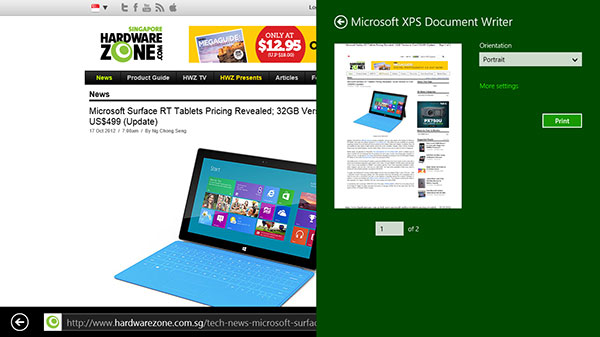 Our favorite feature though is something called called 'flip ahead'. Say you're reading a five-page review on HardwareZone; with flip ahead enabled, instead of using the next page link, simply swipe across the page to go to the next page. What flip-ahead does is to cleverly figure what's the next logical page and when you swipe across to move to the next page, it will fetch the next page for display. Of course, this can only work when there's a straightforward page hierarchy such as a multi-page article. You can turn on flip-ahead through the Internet Options menu via the Settings Charm. Flip ahead is also available in the desktop version of IE10. The toggle can be found under Tools > Internet options > Advanced > Browsing. Note that the functionality of this feature depends on the site design and it may not work all the time. 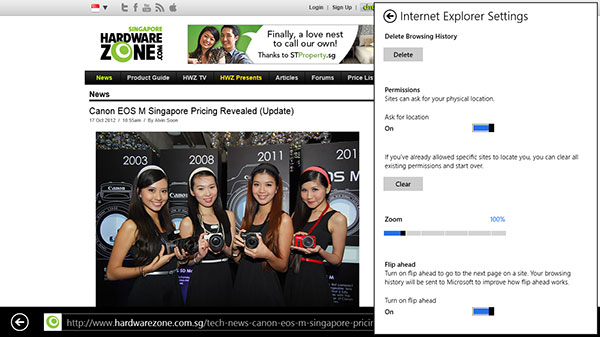