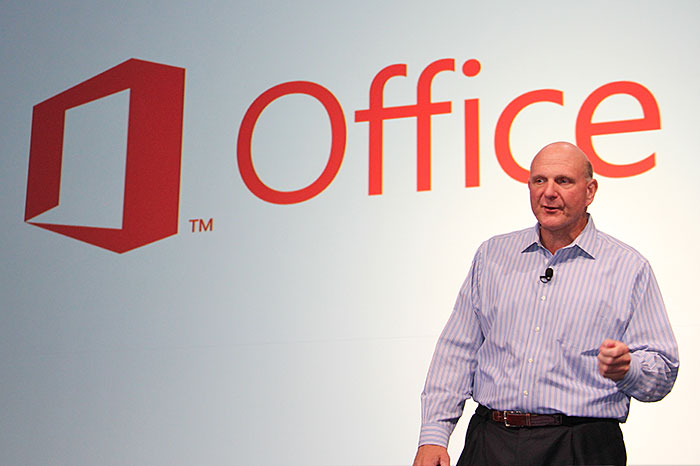 In late January this year, Microsoft seeded a technical preview of ‘Office 15’ (the code name for Microsoft’s next generation of Office products and services) to a select group of testers, with a promise that a public beta would be available sometime this summer. In the blog post announcing this at the time, Microsoft mentioned that Office 15 is the “most ambitious undertaking yet for the Office Division”, and it’s the first time ever that the company would be updating its cloud services, servers, and mobile and PC clients for Office, Office 365, Exchange, SharePoint, Lync, Project, and Visio all at one go.

Since then, details about this next version of Microsoft Office have remained scarce, though leaks from the technical preview have revealed (unsurprisingly) that Metro - the design language that’s also used for Windows 8 and Windows Phone - will figure heavily in the design of the applications. It’s also known that the Redmond company is planning to bundle a version of the new Office with Windows RT (a version of Windows 8 for ARM-based devices) tablets, including its very own Surface RT tablet, which is supposed to go on sale around the same time as Windows 8. Just last week, Microsoft announced that Windows 8 will be generally available to consumers in October.

Well, at a press event that took place today at the Metreon in downtown San Francisco, we finally have more details from Microsoft regarding about its next Office release. While Microsoft didn't brandish the 'Office 2013' name, the individual apps in the preview do have a year designation in their nameplates, such as Word 2013, PowerPoint 2013, Excel 2013, OneNote 2013, and Outlook 2013. So for the sake of clarity, we'll call the new suite Office 2013 in the meanwhile. 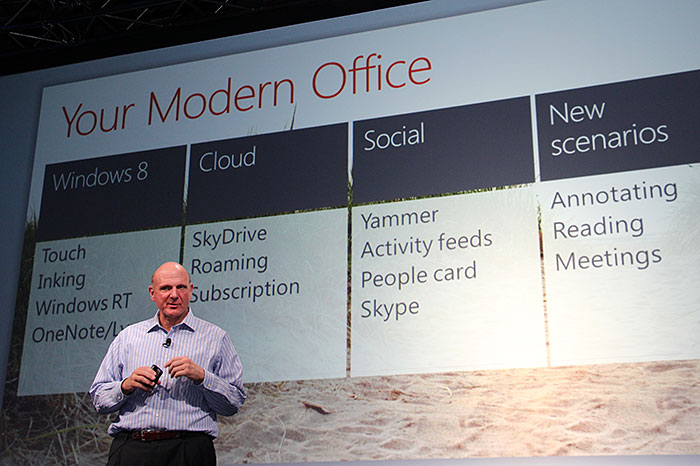 In the opening address, Microsoft CEO Steve Ballmer reiterated that this new Office is the "most ambitious" Office release ever. The focus of the suite is to embrace service first, and align it with the modern office. By the latter, he meant that Office 2013 will make best use of what Windows 8 has to offer (such as touch and inking), provide deep cloud and social hooks for enhancing the sharing and collaboration experiences, and yet maintain a consistent user experience across different platforms and devices. In short, the Office team (and its consumer testers) had the use cases of the modern workforce in mind when designing (and refining, at this stage) the new Office.

This time round, it's clear that Microsoft is aiming for a clean and uncluttered user interface; and from the looks of it, they've succeeded for the most part. And the signs of Metro are everywhere. The Ribbon is still present, but hidden at the top until you call for it. Of course, you can choose to pin it so that it always remains on screen. There's a lot of social integration too. For example, in most of the Office 2013 apps, you can post a document to a blog, share it on social networks, or even initiate a Skype HD call, all without having to leave the app.

By default, Office 2013 will save your documents in the cloud using SkyDrive (or SharePoint). Upon sign-in, you not only have access to your documents, but also your settings, templates, and even your custom dictionary. Simply put, your data roams with you, as you move from device to device.

In the PowerPoint 2013 demo, several new features were highlighted. One of which is the new Presenter View, that's aimed to help speakers during their presentations. This is a cockpit view where your next slide is shown on the right, with notes and other controls, such as a timer. Naturally, on a touch device, you can advance a slide by using the sliding gesture with your finger, or double tap to zoom into a specific portion of the slide. Heck, you can even use the stylus as a virtual laser pointer. 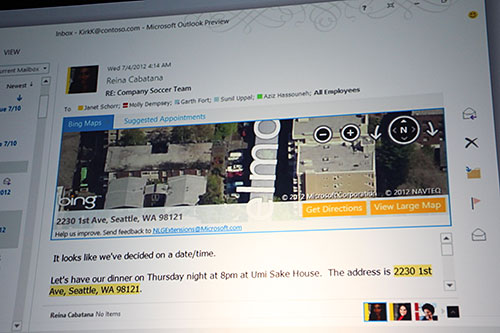 Outlook 2013 now gets a Quick Actions tab at the far right for common functions (such as delete, flag); and you can quickly peek at information when you mouse over the Mail, Calendar, People, and Tasks icons at the bottom left. We like Peeks simply for the fact that we can know at a glance what's coming up next without leaving the app, or breaking our train of thought. For threaded emails, you can now reply to a message inline. Another feature that we feel is going to be huge is the new Office Developer model. In essence, developers can build lightweight web apps (using HTML5 and JavaScript), host them in the cloud (be it Azure or AWS), and users can download and run them right in the Office apps. In the demo, a text address selected in an email was translated to a map view in Bing Maps right in the message. Of course, such adding on of content and functionality isn't exclusive to Outlook. To give another example, in Word, you can add a task pane at the side to search for information and news. Overall, the new app model looks to be a smart strategy, as it brings about a win-win situation to both users (increased functionality) and developers (more revenue). 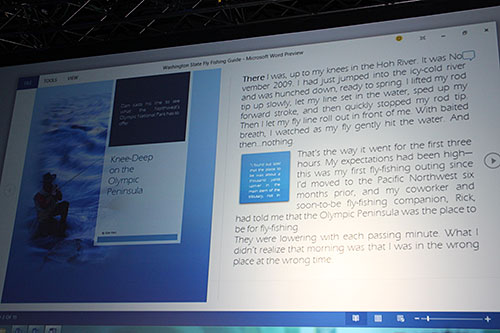 For Word 2013, the feature that gets our attention is Read mode, which helps reading a document easier by removing unnecessary distractions from the UI. Better yet, Read mode is able to resize/reflow content automatically to suit the screen size of the device it's being displayed on. And with Live Layout, you can easily resize and re-position multimedia elements. You can also track comments, and embed videos from online video sites, such as YouTube. Furthermore, when you open a Word file on another device, a Last Location feature will bring you to the exact spot of your last edit. 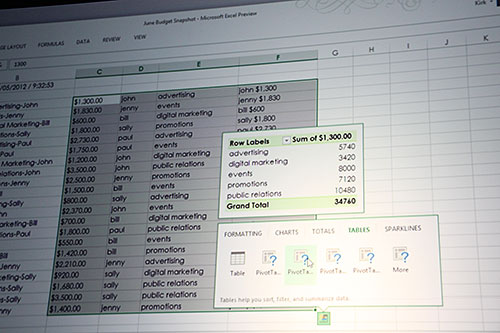 For Excel 2013, a marquee new feature is Flash Fill. Simply put, it predicts the type of data required in the cells, and fill them up for you. Yes - there's no need for formulas or macros. A Quick Analysis Lens feature will look at your data and provide chart type recommendations. Always wanted to create PivotTables, but don't know how to? Excel 2013 will help you with just a few clicks. We're also glad to see that it's now so much more intuitive to change chart element formatting (like the title and layout), because frankly, every second shaved in such secondary tasks means more important work can be done. As mentioned earlier, workbooks are saved on SkyDrive or SharePoint by default, and you can post a spreadsheet (even a selected portion of it) on your social network pages. By way of a Lync connection, multiple parties can get to share and edit it. 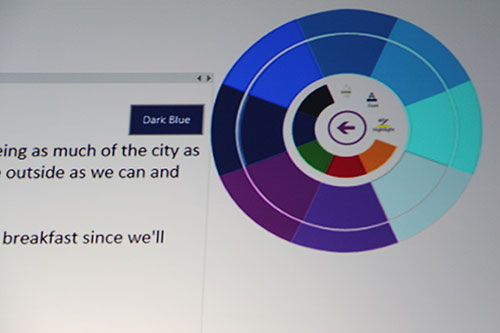 Of the new Office apps, Lync and OneNote (Microsoft's go-to digital note-taking app) are the ones that get the Metro-style makeover the most. One cool feature of the new OneNote app to help users of touch devices is the Radial menu for getting to commonly used tools, like font size, and color. And if your device has a camera, you can quickly fire it up, take a picture, do simple edits, and embed it into the note. OneNote also gets the Resume Reading feature of Word and PowerPoint. It's also app aware in the sense that when an embedded Excel file gets updated, the preview will get updated too. OneNote will also autosave your notes. 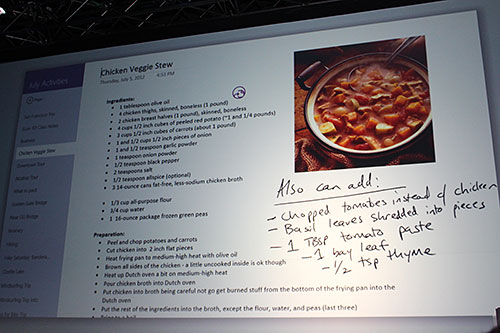 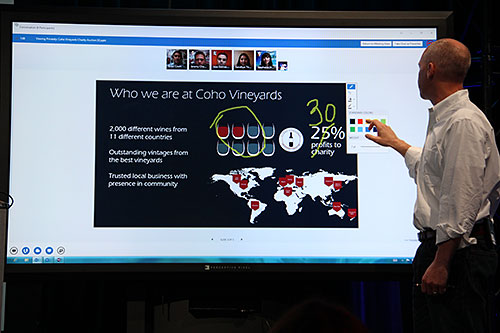 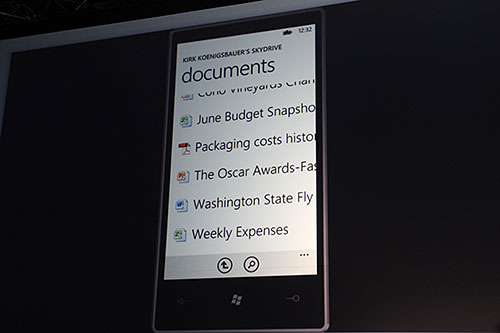 The Office 365 Home Premium Preview is now available for download from Microsoft. You can install it on up to five PCs or tablets. You'll get Word, PowerPoint, Excel, Outlook, OneNote, Access, and Publisher. Enterprise users should check out Office 365 ProPlus, Office 365 Small Business Premium, and Office 365 Enterprise. Additional server products (such as SharePoint, Exchange, Lync, Project) can be downloaded here.

Microsoft hasn't announced how many versions of Office 2013 there would be, the release dates, exact hardware requirements, or any standalone or subscription pricing information. We were also unable to get any information on the much rumored Office for the iPad. What CEO Steve Ballmer did say however is that the version of Office for ARM devices isn't going to be a dumbed-down "Office Junior". Users can expect the same full experience as the version designed for the Intel architecture. At this point, it remains that Office for Windows RT will have Word, Excel, PowerPoint, and OneNote. Office 365 for the Mac is also in the works, but there's no word on when it'd arrive. The preview released today doesn't include a Mac version.

At this juncture, it's worth pointing out that the preview only runs on Windows 7, Windows 8, or Windows Server 2008 R2 machines, and we expect this to remain come the final release. When asked, PJ Hough, Corporate Vice President of the Microsoft Office Division said that this is in part due to the graphics acceleration and touch requirements of Office 2013.

To know more about the difference between Office 2013 and Office 365, and the answers to some frequently asked questions, do check out our Office 2013 FAQ article.