Time flies. With the announcement of the September 22 general availability of Office 2016, the current Office story is coming full circle. A lot has happened since I wrote in depth about Office 2013 and Office 365 some 32 months ago - you know, such as Windows 10 and Microsoft’s recent re-org. So, while several portions of that article are still relevant today, and even though I’ve already talked about the latest Office developments on HardwareZone on several occasions in the past few months, I still think it’s high time to bring you (especially those unfamiliar with the new Microsoft) up to date with the latest Office happenings in a consolidated piece.

1.) How many different versions of Office are there?

Unlike the old Microsoft, the current Microsoft helmed by CEO Satya Nadella isn’t opposed to the idea of Office running on rival devices and platforms. In fact, at this point, in addition to Office running on PCs and Macs, Office can be used on Windows Phones, iOS, as well as Android devices.

Here are the different versions of Office and the types of devices you can install them on:

- Office 2013 and 2016 for PC: Consisting of Word, Excel, PowerPoint, OneNote, Outlook, Publisher, and Access, this is the desktop version of Office. An Office 2016 IT Pro and Developer Preview has been made available since March for IT pros and testers (home users can try it too), and now, Microsoft has confirmed that Office 2016 will be broadly available starting September 22, 2015. You’ll need at least Windows 7 to run desktop Office.

- Office 2016 for Mac: Comprising of Word, Excel, PowerPoint, OneNote, and Outlook, this version is for Macs running OS X 10.10 or later. It was released in July this year for Office 365 subscribers; and starting this month, you should also be able to get it with a one-time purchase.

But with Windows 10, Microsoft has also released Office Mobile apps, such as Word Mobile, Excel Mobile, PowerPoint Mobile, and OneNote, on the Windows Store. (Outlook Mail and Outlook Calendar are part of the Windows 10 install.) These are touch-optimized, universal apps that you can use on small Windows 10 PCs and tablets. They also come with some editing restrictions that I’ll elaborate below.

- Office for iPad and iPhone: Comprising of Word, Excel, PowerPoint, Outlook, and OneNote, and requiring iOS 7.0 or higher, this is the ‘real’ Office that iOS users have been waiting for years. First arrived in mid 2013 for the iPhone and early 2014 for the iPad, both been updated several times since. At the moment, you can create or edit documents when you sign in with a free Microsoft account, but an Office 365 subscription is needed if you want to unlock certain features.

- Office for Android phone and tablet: Generally available since January for Android tablets and June this year for Android handsets, Office for Android comprises of Word, Excel, PowerPoint, Outlook, and OneNote. Core features such as viewing, creating, and editing documents are free for devices with a screen size of 10.1 inches or smaller, but a full experience requires an Office 365 subscription.

- Office for Windows Phone: If you’ve a Windows Phone, Office should already comes pre-installed. Expectedly, you can use it to view and edit Word, Excel, and PowerPoint documents from nearly anywhere. Content and formatting stay intact so the document still looks great when you’re back on your PC or Mac. As Windows handsets adopt Windows 10 Mobile, the next progression is Office universal apps for these phones.

To reiterate, Office 2016 for Windows will be available for download for Office 365 Personal and Home subscribers come September 22, 2015. Automatic updates will start rolling out in October. For volume licensees, it’ll be on the Volume Licensing Service Center starting October 1.

Update (Sep 28): Check out this article for more details on new features and pricing, including perpetually-licensed versions.

Also, organizations who have subscribed to Office 365 ProPlus will be getting a new tri-annual update model (see graphics below).

For Mac users, Office 2016 for Mac is already available for Office 365 subscribers. Perpetually-licensed versions that you only need to pay once and use for as long as you wish will also be sold. Students may also be able to get it for free or at a discount. More details can be found at office.com/student.

Update (Sep 28): Two perpetually-licensed versions of Office 2016 for Mac are now available. Check out this article for more details.

Lastly, Office for iPad and iPhone and Office for Android tablet and phone are also already available on the Apple App Store and Google Play store respectively.

3.) I'm already running Office 2016 Preview for Windows. What should I do come September 22?

First of all, Office 2016 Preview will expire sometime in the fall. When that happens, several functions will be turned off. You can choose to subscribe to Office 365 at that point, or just uninstall it and install whichever prior edition of Office you have. If you're already an Office 365 subscriber, good for you. You can simply uninstall the preview and install the final version via your Office 365 My Accounts page.

Business users who've gotten Office 2016 through the First Release program will continue to get Office updates. Of course, they can uninstall the preview and install the standard release from the usual channels (e.g., from My Software page). The same goes for Office 2016 IT Pros and Developers Preview.

4.) There’s no lack of office productivity tools out there. Why should I use Microsoft’s?

The new Microsoft recognizes that not everyone uses Windows and Windows Phone. So the current Office story is to give you freedom to get work done anytime, anywhere, regardless of platform or device you use.

While the Office team has made the efforts to tailor Office to the strengths of each platform it’s on, you’ll find that the (mobile) Office apps look and feel very similar across platforms. This is to reduce unnecessary friction from say, when you start a document on Word on iPad and then pick up where you left off on Word Mobile on Windows 10.

For readers not familiar with Office’s recent progress, Office for iPad and iPhone, Office for Android tablet and phone, and Office Mobile for Windows 10 are built from the ground up for touch and small-screen devices. Microsoft promises full fidelity viewing of the documents, so you can be ensured that edits and changes on any device reflect correctly across all of them. And with OneDrive cloud storage integration, you can access your documents from anywhere. This also means it’s easy to co-author with others on documents and projects. For users whose needs aren’t adequately met by the mobile versions, there’s Office 2016 for PC and Office 2016 for Mac that are designed for the desktop environment and the more traditional keyboard and mouse inputs. That said, there’s again no steep learning curve if you already use Office on a PC or iPad, as you get familiar tools and interfaces like the Ribbon interface and task panes.

For the new Office 2016 on Windows, you get all the advantages illustrated above as well as new IT capabilities, especially for businesses subscribed to Office 365 ProPlus. Customer relationship management (CRM) is also getting a major boost this time as it gets more integrated with Office. In the new Microsoft Dynamics CRM 2016, there will be new Cortana integrations, new Excel templates, a new CRM app for Outlook, the ability to open Office apps within CRM or CRM mobile app, and more. If your business is looking to level up customer engagement, you can check out this Microsoft blog post for more details on what’s coming.

And here are some resources from Microsoft to get you up to speed with the new Office releases:

5.) What about Office on new device categories, like Apple Watch, Android Wear, and the iPad Pro?

While Word, Excel, PowerPoint, OneNote, and Outlook are the main Office apps that Microsoft have focused in bringing over to the other platforms, there are other Office apps that aren’t your usual, word processing, spreadsheet, slide show presentation types of apps. Better yet, most of them are free and don't require an Office 365 subscription. More famous Office apps outside this core group include Skype and OneDrive. There are also others, like Lync, Yammer, and Sway. Sway is arguably one of the more interesting ones in recent memory; it lets you create and share highly interactive reports, presentations, and personal stories.

And since the new Microsoft is keen to bring Office to as many users as possible, it’s also quick to support new platforms and devices that rivals like Apple and Google have come up with.

What about the just announced iPad Pro and the upcoming iOS 9 and WatchOS 2? Yup, Microsoft has already developed a number of new features for Word, Excel, PowerPoint, OneNote, Outlook, and Translator to take advantage of the new enhancements. For instance, Slide Over and Split View for the Office apps for better multi-tasking on the tablet; inking for the iPad Pro using the Apple Pencil; and Outlook and Translator data (complications) on the Apple Watch’s watch face.

Update (Sep 28): Note that since the iPad Pro has a 12.9-inch display, it doesn't qualify for the free editing functions, features that Microsoft gives to 10.1-inch and below tablets. As such, you need an Office 365 subscription to edit documents on the iPad Pro. 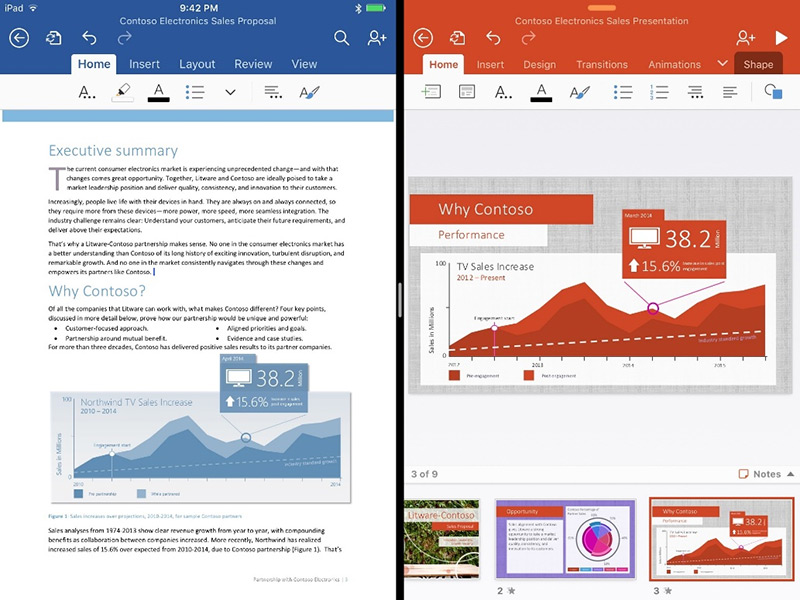 Simply put, Office 365 is the umbrella term for Microsoft’s Office-related apps and services that are offered on a subscription basis.

For home users, it lets you use Office apps on Windows and OS X, provides additional OneDrive cloud storage, and perks like Skype call minutes. It also unlocks certain restrictions, such as the ability to create and edit documents on Windows 10 and Android devices with a screen larger than 10.1 inches; and on iOS, access and save documents in OneDrive for Business or SharePoint.

For business and enterprise customers, there are way more Office 365 plans that cater to different business requirements, depending on number of seeds, and whether you need any of the business-class email, social networking, CRM, security, compliance, business intelligence, administration, and mobile tools and services.

Of course, since Office 365 is a subscription service, your Office apps are always kept up to date, both features and security-wise.

7.) What do you recommend for a home user?

If there’s no one in the family you can share the plan with, there’s Office 365 Personal that costs S$9.80 per month. This plan allows you to install all the Office apps on one PC or Mac, and the mobile versions on one tablet and one phone. You still get 1TB of OneDrive storage and 60 Skype minutes per month. For students and teachers, you can go here to find out if you’re eligible for Office 365 Education Plus.

Not interested in paying for or installing apps, and don’t mind working in the browser? Then check out the free Office Online, which has also made great strides in recent months. 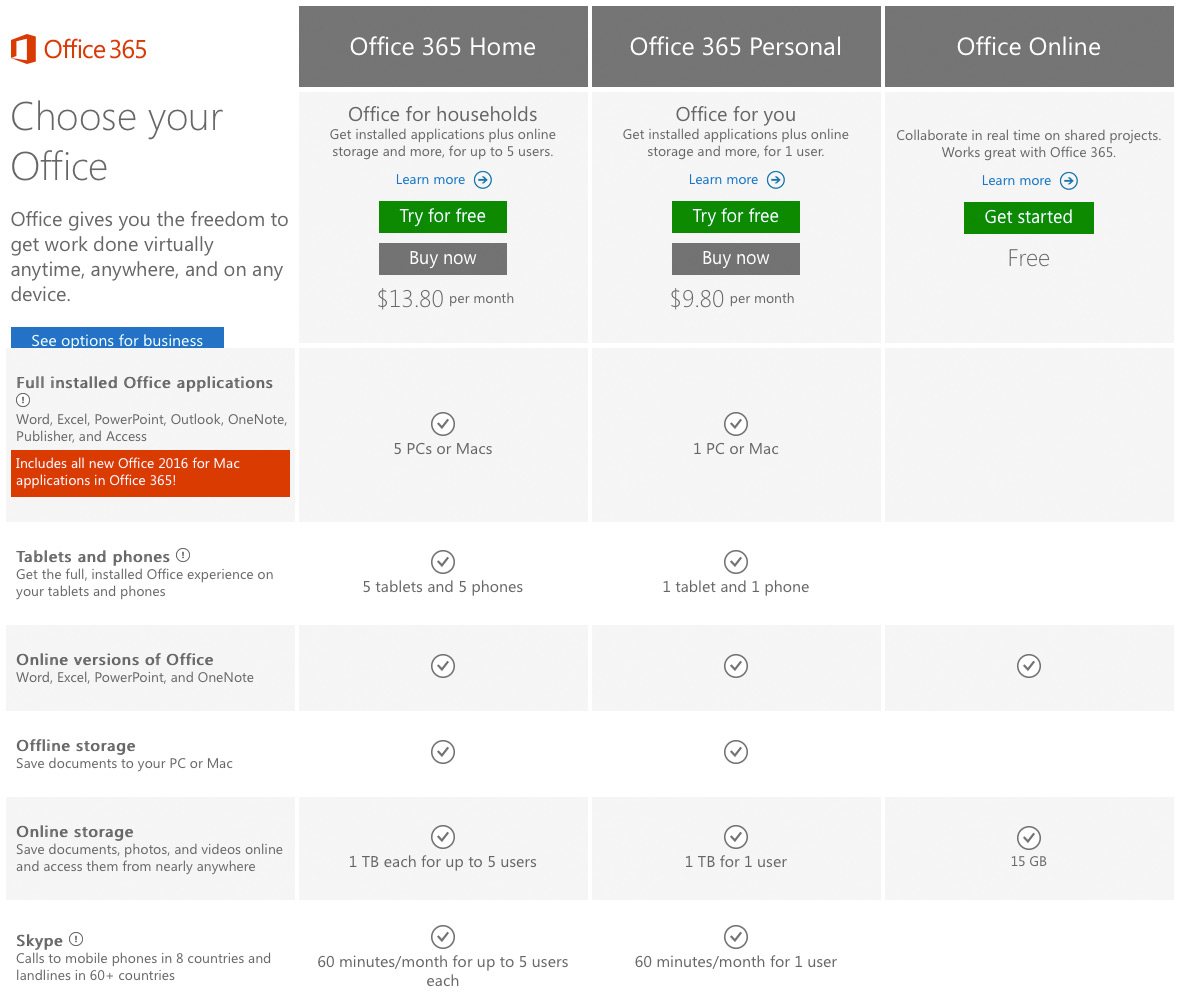