The Lumia 950 and 950 XL are the first phones to run on the mobile version of Microsoft's Windows 10 platform. Windows 10 Mobile looks essentially the same as the old Windows Phone 8 platform, and uses the same Live Tiles home screen.

If you haven't seen Windows Phone before, all of your apps are arranged in tiles on the home page. Each app tile can be customized to three different sizes, with the largest ones displaying information within the tile itself. For example, the Photos tile will display a slideshow of your pictures while the Mail tile will scroll through your unread Inbox messages. 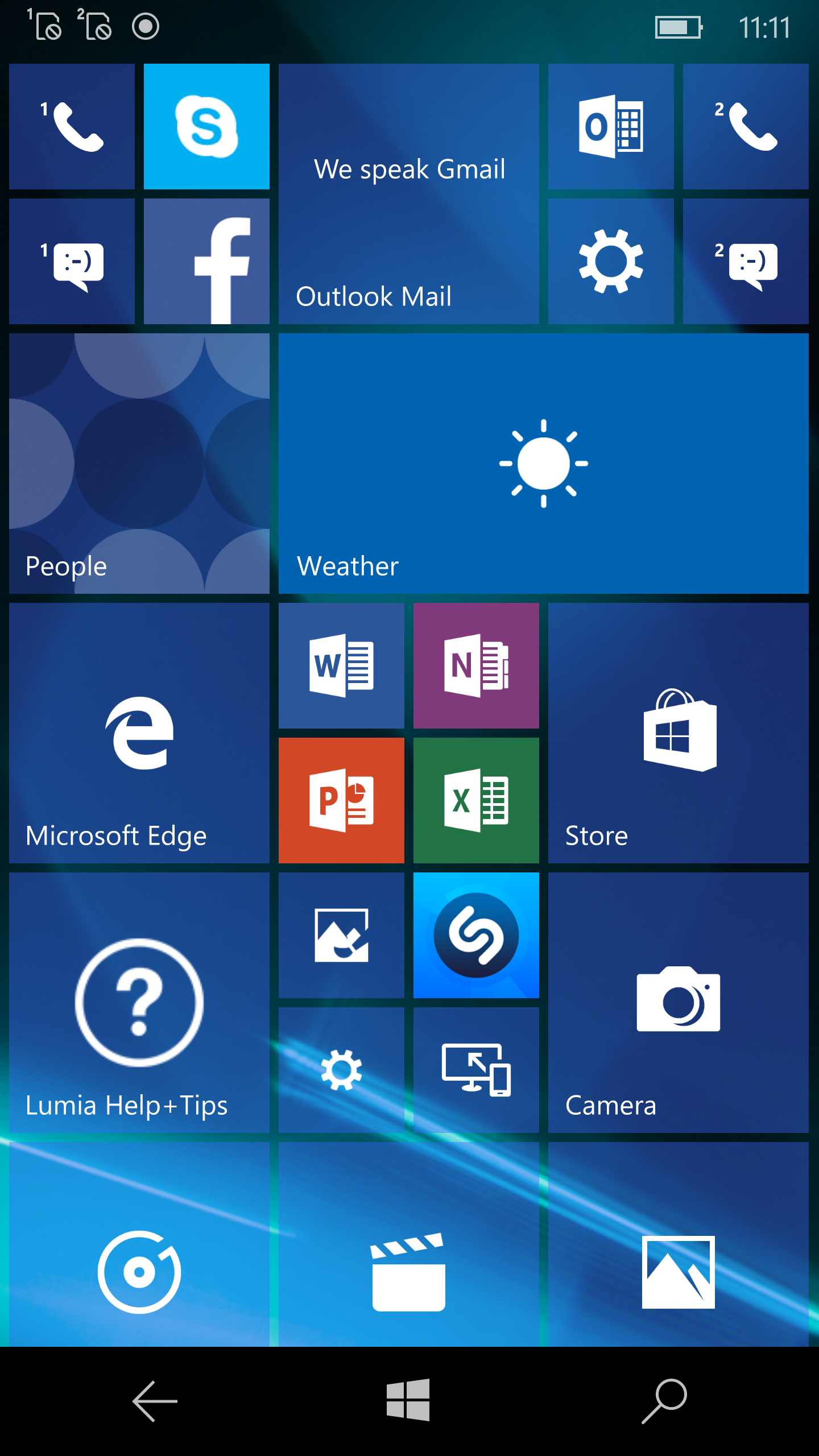 Both phones come pre-installed with Microsoft Word, Excel, PowerPoint and OneNote. Windows Phone used to have a small advantage here since it used to be the only platform with Office apps, but now that you can get them on iOS and Android, that advantage is gone. Like the iOS and Android versions of these apps, they're read only. You'll need an Office 365 subscription if you want to edit anything.

Like iOS and Android, notifications display at the top of the screen, and there's a dropdown Action Center if you swipe down that lets you toggle WiFi, Bluetooth, and Rotation Lock on or off, or expand for more settings, including Airplane mode. Hitting the volume rocker will bring up an on-screen volume menu that lets you set the ringer-and-notifications volume and media-and-apps volume separately. The Live Tiles home screen looks and feels as good as it ever did. It's slick, fast and displays plenty of information without looking cluttered. However, it's still faced with the same problem Windows Phone has always faced: there just aren't enough apps for it. Yes, Facebook is available, but it's slow and doesn't seem as well optimized as its iOS and Android counterparts. As for Instagram, it took two and a half years for the app to finally be updated to include video support.

Even worse, a number of developers have completely discontinued support and development of their Windows Phone apps including Mint, Pinterest and Kabam. Even Microsoft has discontinued a number of its own apps, including some fairly popular Lumia camera apps, including Lumia Storyteller, Lumia Beamer, Photobeamer, and Lumia Refocus. In Microsoft's defense, some of those features have now been included in Windows 10 Mobile's default camera app, but many are missing.

While most flagship smartphones now come with a fingerprint scanner, Microsoft has gone a different route, incorporating an iris scanner, which uses the front-facing camera to scan your eyes to unlock your phone. This isn't the first iris scanner we've seen (both the ZTE Blade S7 and AXON Elite are armed with retina scanners). The iris scanner works pretty well. Just press the power button and a red light on the top right of the phone will indicate that it's searching for your eyes.  It works most of the time, and it's secure enough that you can't fool it with a picture of your eyes. Having said that, it's a fair bit slowler than fingerprint unlocking, and you have to take off your glasses and look directly into the camera each time, which is a bit tiresome. Windows Hello is apparently still in Beta, so it might get better eventually. Once connected, you'll see a Windows 10 desktop on your screen. Any compatible apps you have installed on your phone will show up and can be used full screen just as they would if you were using a Windows 10 PC. Download anything using the Microsft Edge browser and it will be on your phone when you unplug it. This feature is great for anyone that likes to do work on the go, as the pre-installed Microsoft Office apps turn into full Windows versions when connected to the big screen (although you still need an Office 365 subscription). Do note though, it's not a full Windows PC replacement. Supported apps are pretty limited, and you won't be able to install any .exe files like you would with a regular PC, which seriously limits what you can do. It's a bit like the return of Windows RT, and we all know how that turned out. There are some other quirks to note too, for example, you can copy and paste text, but not images and you can't put shortcuts on the Continuum desktop either, everything has to be launched from the Start menu.

Cortana is Microsoft's version of Siri or Google Now. Unfortunately, even after two years, she's still not officially available locally, so to use her, you'll have to set your region setting to U.S. and language setting to English (U.S.). However, this means you'll have problems accessing the local Windows Store, and unsurprisingly, she still struggles a bit with local locations anyway. Other than that, Cortana is mostly the same as the other virtual assistants. You can ask her about the weather or your daily schedule, and she can set alarms and create location and time based reminders for you. Like Siri and Google Now, you can activate Cortana with a voice prompt: Hey, Cortana.