Microsoft launches Office 2016 with a focus on collaboration and sharing

A new office for the modern era

Microsoft has unveiled Office 2016, its latest suite of Office software that comes packed with new tools to collaborate, share, and cut down on time wasted on mundane tasks like hunting for a particular email. The updated apps are just the latest addition to Office 365, Microsoft’s cloud-based subscription service.

When it comes to matters of productivity, employees are finding that work is no longer confined to the office or even in a single time zone. According to Microsoft, around 71% of employees spend at least part of their work day outside the office. And given that many companies have offices around the globe, it is imperative that there be an easy and intuitive way to work in real-time.

Office 2016 has been designed to address these concerns and many similar ones in a changing, global workplace. For example, Microsoft Word, PowerPoint, and OneNote will now support real-time co-authoring à la Google Docs style, which means that multiple parties will be able to view and edit the same document in real time.

Users will be able to invite people to edit the document from within the program itself, and a list of contributors – including detailed statuses on whether they are currently editing the document – is displayed in a pop-out sidebar on the right. 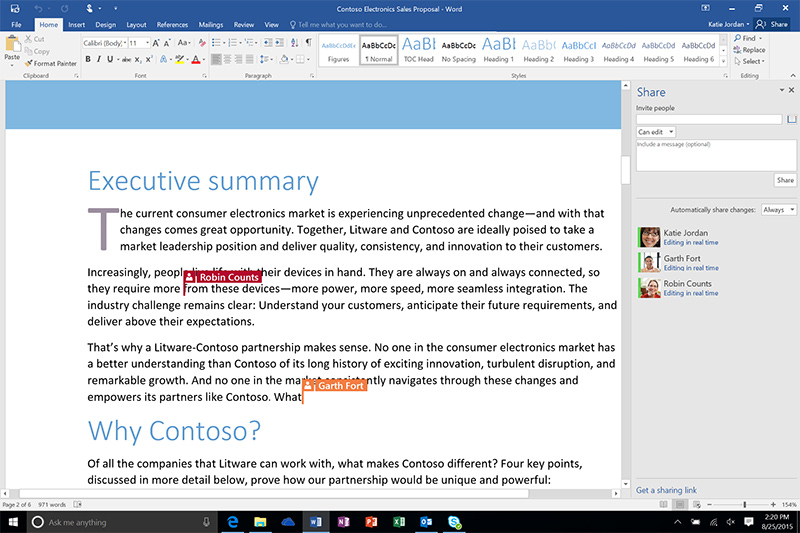 But when multiple people can edit a document, it becomes more important to be able to keep track of version history, and Microsoft has thought of that as well. A detailed history of past edits can be pulled up, along with the name of the person who edited it. 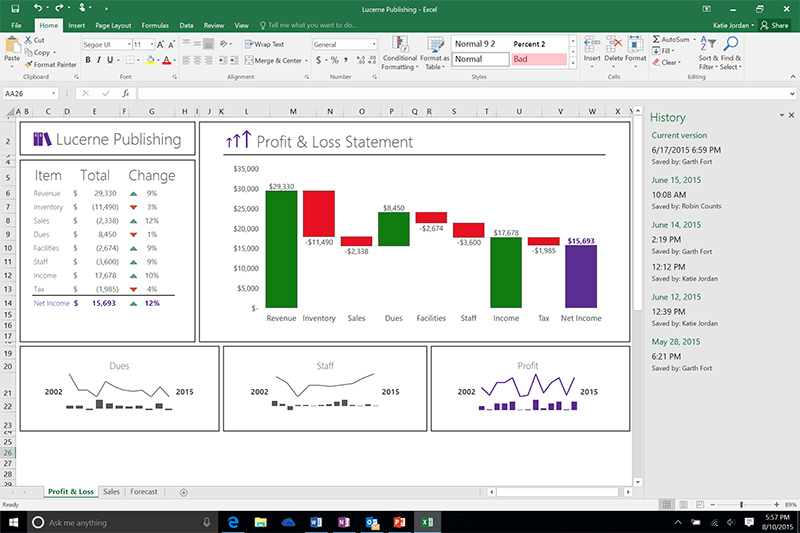 Another key feature is Smart Lookup, which allows users to highlight a word or phrase in the document or slide, hit the Smart Lookup button in the toolbar, and view Web search results without leaving the app. 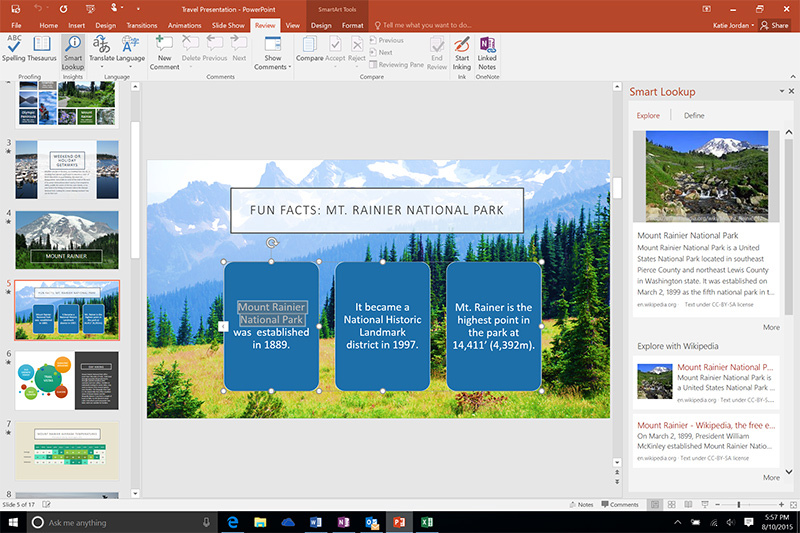 Then there’s Tell Me, an intelligent search bar that helps users cut through the navigation thicket of searching for a particular formatting tool or tracking down an elusive email. The search bar sits next to the main tabbed navigation bar, and you can key in the action you want to perform. It’s fairly conversational, something along the lines of “search for emails from John”.

Microsoft also introduced Office 365 Planner to help teams organize their work. Tasks are listed clearly in a sidebar, and bar charts are available to show the distribution of workloads among team members. Tasks can also be grouped according to whether they have been completed, are currently being worked on, or are even late, so users can get a quick view of overall progress. 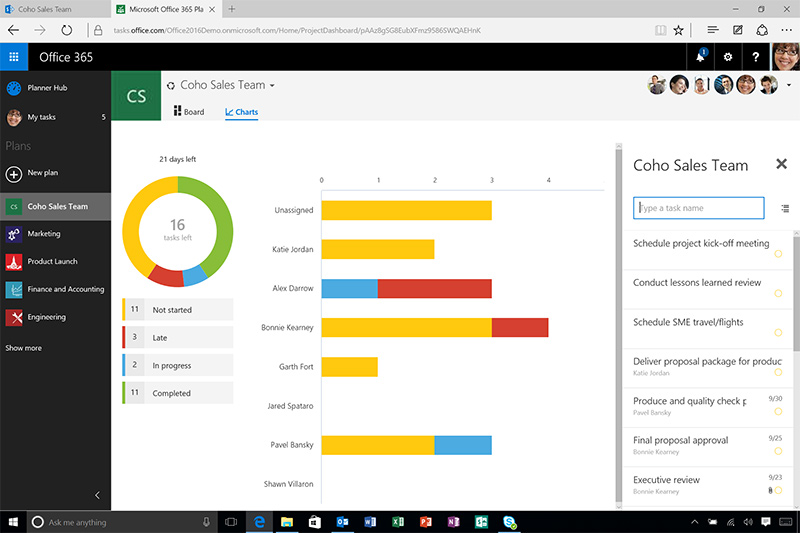 Documents can also be protected with multi-factor authentication, which is expressly designed to facilitate secure access to content when users are away from their corporate networks.

Apps like Sway and Delve have also been updated. Sway is Microsoft’s digital storytelling app, intended to enable users to create rich and visually compelling layouts and content. For more details about Sway, you can refer to point 5 in our Office 2016 FAQ. 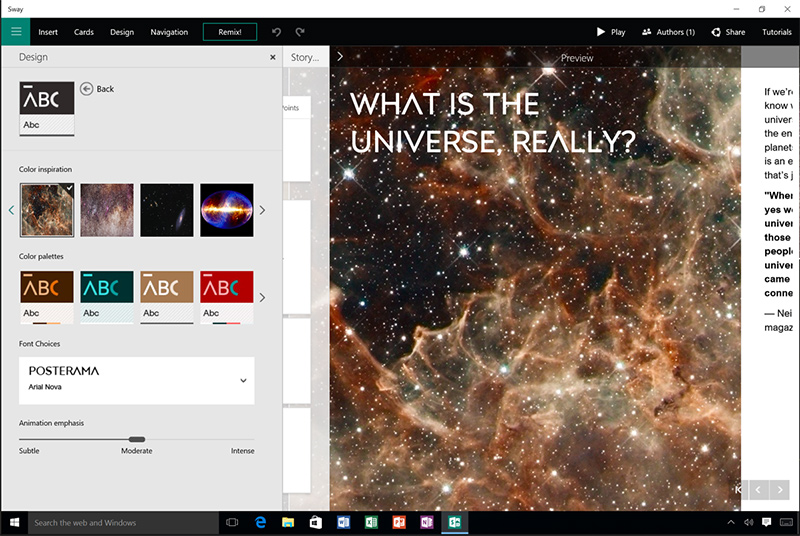 Delve is another interesting recent addition. It provides users with a clear overview of everything they’re working on across all Office 2016 apps, so there’s no need to look for individual files. It almost looks like a social media profile, except your timeline is populated by your document history instead of where you went last night.

A sidebar at the left serves as a friend list of sorts, and you can click on co-workers’ profiles to see what they’re working on as well. And if you’d like to check to see who is working on a specific document, the search function will let you do that too. 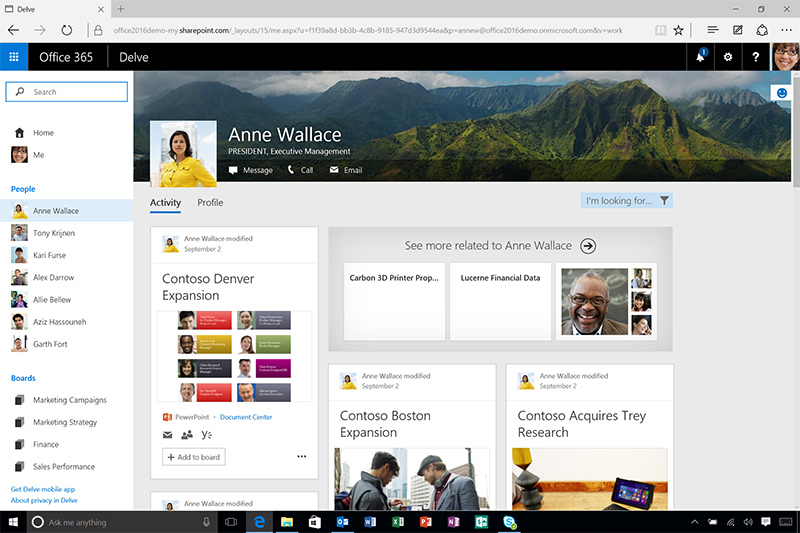 Starting today, Office 2016 will be rolled out to existing Office 365 subscribers and the Microsoft Store. Copies will also be available as a one-time purchase for both PCs and Macs.

Looking for perpetually-licensed Office 2016 for the Mac? We've the details here.