Meet the Lady of the Lake: An interview with the cast of Netflix's Cursed 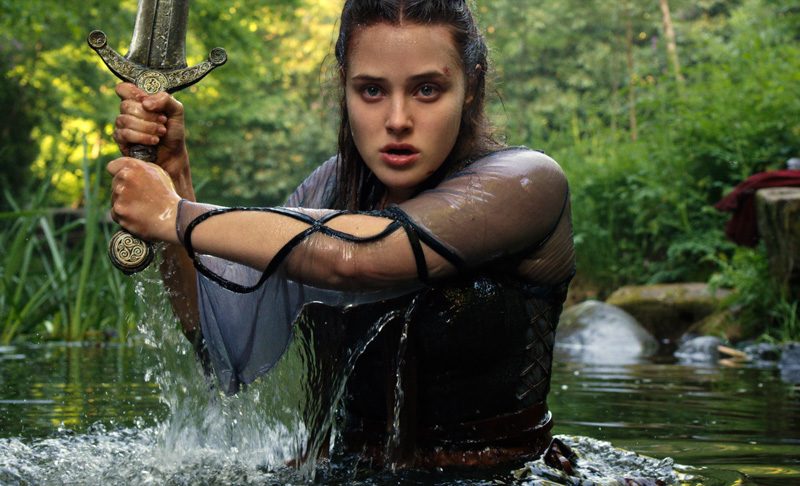 From the minds of author Tom Wheeler and writer/artist Frank Miller comes Cursed, Netflix’s re-imagining of the widely popular Arthurian legend. Instead of being yet another King Arthur origin story, this fantasy drama dives into the backstory of Nimue - the young woman who would later become the Lady of the Lake.

Nimue finds herself paired with Arthur, a humble mercenary on a mission to deliver an ancient sword to Merlin - you know the one. On her journey, she’ll have to deal with the barbaric Red Paladins and their complicit King Uther, while coming to terms with her own magical powers. Katherine Langford (13 Reasons Why) and Gustaf Skarsgård (Vikings) play Nimue and Merlin respectively, while Devon Terrell (Barry) and Daniel Sharman (Teen Wolf) play Arthur and the mysterious Weeping Monk.

I recently had the opportunity to sit down with members of the media and interview this rather insightful cast of actors. What drew them to portray such iconic characters in a different light? Which episode of Cursed is their favourite? Why was the season finale such a memorable episode to film? Read on, and find out! 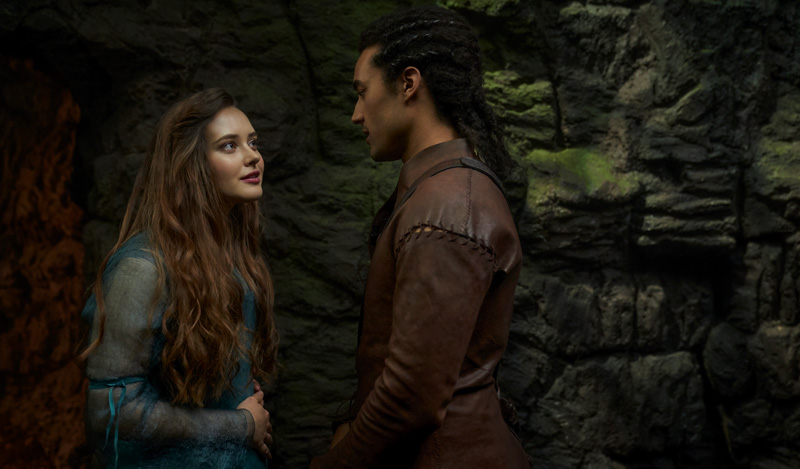 What attracted you to the role of Nimue/the legendary Lady of the Lake?

Katherine Langford: I’m a bit of a history buff. I love history and I love learning, but I also love the fantasy genre and the Arthurian legends are probably the most famous tales we have. What I think is really interesting is that when you think of these legends, you think of Arthur, Merlin and the Knights of the Round Table - but you never really dive into the female characters within this epic tale. So to be able to dive into the Lady of the Lake and her backstory was something that really interested me because she’s one of the most prolific characters, and yet there’s very little information on her.

What did you first think of the script, and why did you decide to join the show?

Katherine Langford: I read this as a manuscript two years ago, and it was a really interesting time because I knew I was looking for something that felt special and different. I wasn’t necessarily looking to do something that was in TV but when I read this script by Tom Wheeler and Frank Miller, I just knew that it was something that I would love to be a part of. Not only is it a part of this legendary tale, but it’s telling it through a completely new lens. As a young woman, being able to tell the story of a heroine and acknowledging all of the obstacles specific to being a woman - those roles don’t come by too often. I’m honoured to have been a part of it.

Gustaf Skarsgård: I was sent the first five (episode) scripts at first, which is unusual for a TV show. Normally you’ll only get one or two scripts, so I was already grateful that I got to read so much. I wasn’t originally looking for this, having spent five years on a medieval show (Vikings), but I couldn’t put them down. I read all these five scripts in one go, because I wanted to know what happens next. I was immediately invested in these characters, especially the Merlin character. I thought this was just too much fun, and I couldn’t pass on it.

How is your role on Cursed different from everything else that you’ve done?

Katherine Langford: This genre is something that I’ve never done before, and I could see that it was going to be an incredible challenge. Not only was it a different genre on a totally different scale, but it required a certain skillset. Learning horse riding, sword fighting and dialect in a short period of time and having to maintain that for the duration of shooting was definitely a new challenge for me. What feels different to me with Nimue in terms of the characters I’ve played, is the journey that she goes on in the show. When we first see her, she’s very restless and unsure of where she belongs. Throughout the series, you really see her embrace all of herself, including her powers and grow into her womanhood. That’s a story I’ve never really touched on before.

Gustaf Skarsgård: I always say that there are aspects of Merlin that I’ve definitely played before. I’ve played a lot of eccentric, destructive and intelligent characters - but never a magical one that has lived for a few thousand years. That’s a new perspective.... what that does to your perception of other people, and your tendency to use them as tools in your own game rather than people of their own right. He’s such a wide and broad character, but I definitely feel like I can use my past acting experiences in Merlin - because he also plays different characters depending on the situation he’s in.

Merlin is one of those characters we’ve all grown up with one way or another. What do you think makes this particular portrayal of the character stand apart?

Gustaf Skarsgård: It stands apart in every way. I’ve never seen Merlin portrayed like this before. He’s a very complicated character - cunning, charming, enigmatic, cruel and selfish - but he’s still got a huge heart and battling his own demons. I think it’s a great take on the character. Personally, I don’t have a fixed idea of who Merlin is, as opposed to other prominent magicians like Dumbledore and Gandalf. You know how they look - with their great beards - but Merlin is already more open to interpretation. 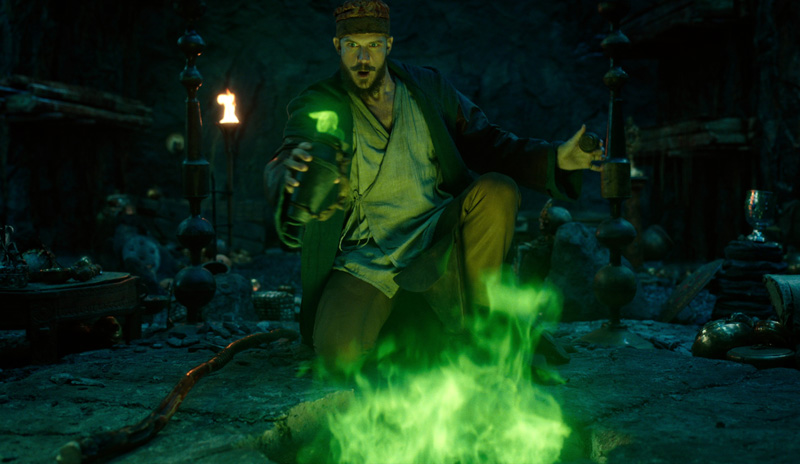 What was your favourite location to film in?

Katherine Langford: Gustaf, I feel like you’ve shot in some very beautiful castles and whatnot.

Gustaf Skarsgård: I think North Wales was my favourite. We were shooting in the Snowdonia National Park and it was a tremendously beautiful part of the U.K. that I haven’t been to before. It has this ancient feel to it. We also shot in some amazing old ruins, castles and churches and whatnot - so there were quite a few spectacular locations.

Katherine Langford: To add on to that - we shot in some of the most incredible locations. We shot in an abbey that was close to a thousand years old, and it hailed. We shot there for a week and it was incredible to be in those buildings, amidst all that history and be in places most people aren’t even allowed to go. As Nimue, we shot a lot in forests and being able to be outside, in nature, in Wales... it was very special.

If you had to pick one, which episode of the show would be your favourite?

Gustaf Skarsgård: Well my favourite for Merlin is Episode Six - but that’s just because I’m in it a lot. For Merlin, that is the most important episode. We learn more about him and his past, and the relationship between him and Nimue deepens. I also really like the last episode - it was quite climactic, with a lot of cliffhangers.

Katherine Langford: I love Episode Six for that reason as well. In the middle of every season, there’s always that episode that just sinks deeper and sets the tone. Episode Six feels very powerful in that sense. You get a lot of information and a lot of insight. Episode Ten as well, is very moving and powerful - along with Episode One because it was the first one we shot. It works as a great setup for the season.

How was your experience working with each other?

Gustaf Skarsgård: It was great. I first met Katherine during the audition for a chemistry read, because she had already been cast. It was tremendous from the get-go - she’s so talented, present and playful. I was really impressed by her, and that made me want the role even more, to have a lot to do with her. We had a lot of fun, and we triggered each other emotionally very easily. There’s a strong connection there that I’m really grateful for - both on-screen and off-screen. We’re close friends.

Katherine Langford: And likewise. I watched Vikings, and that’s something on-screen that makes Gustaf such an incredible presence. The beauty of being able to work with him is that he just transforms. There’s something so smart, subtle and watchable about him, and I feel like I learned a lot. We also had a lot of fun, and it was so nice to be able to go to work and be in that energy, and not just watch someone who’s incredible at what they do, but amazing to be around and generous with their time and thoughts.

What would you say is the beating heart of this show?

Katherine Langford: That’s a great question - because it’s making me think of different things, you know? There are so many different journeys. There’s a lot of strength in the path to courage, and a path for everyone in becoming stronger and more definitive, powerful versions of themselves. The relationships, as well. I can’t spoil too much of them, but they’re tied together well and vulnerable at the same time. To watch those tensions weighed upon throughout the season kind of breaks your heart, but it also makes you root for those people. Connection, even if the most surreal, bizarre and hardest times. What means the most is one another, and the people you love.

Gustaf Skarsgård: Nimue. Apart from all the things Katherine already mentioned, it’s really her struggle that we follow in the show. 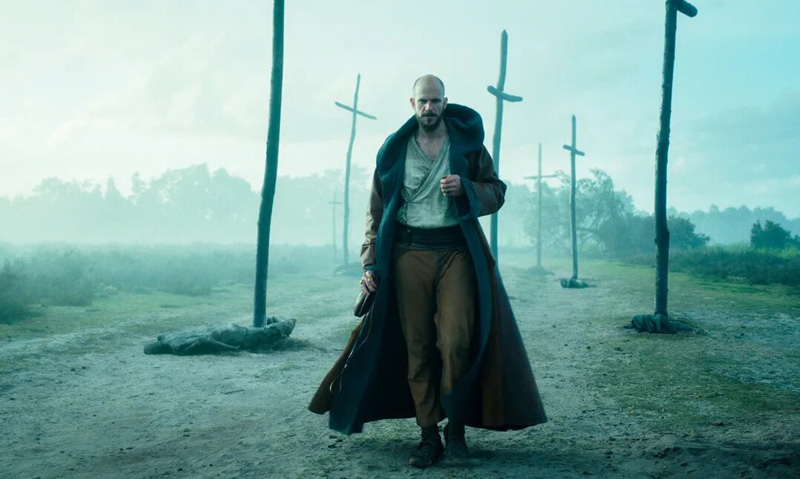 What was your most memorable moment while filming?

Katherine Langford almost spoils a scene from the show, but stops herself: We shot this one particular scene, which involves a couple of other characters. I actually felt really bad, because I actually got really sick. I was very ill, shooting this really intense, wonderful scene, but I think, watching it... I’m sorry - I feel like I can’t say this. Gustaf, please say something! You know what I’m talking about.

Gustaf Skarsgård: I know what you’re talking about - let’s see if I can help you to not reveal anything. It was the climax of Episode Ten. We spent a lot of days shooting that and getting it right. It was very meaningful to all of us, our character arcs and the season. A lot of things came together then, and it was my first time acting with some of the other cast-members I hadn’t gotten to know before. That was a really special time, when we all got together to shoot the climax of this show. Does that sum up what you were trying to say, Katherine?

We also interviewed Daniel Sharman and Devon Terrell - AKA The Weeping Monk and King Arthur himself! Check out the next page to learn who loves looking like a member of AC/DC.