Meet the Huawei P9, the first smartphone co-engineered with Leica

Meet the Huawei P9, the first smartphone co-engineered with Leica 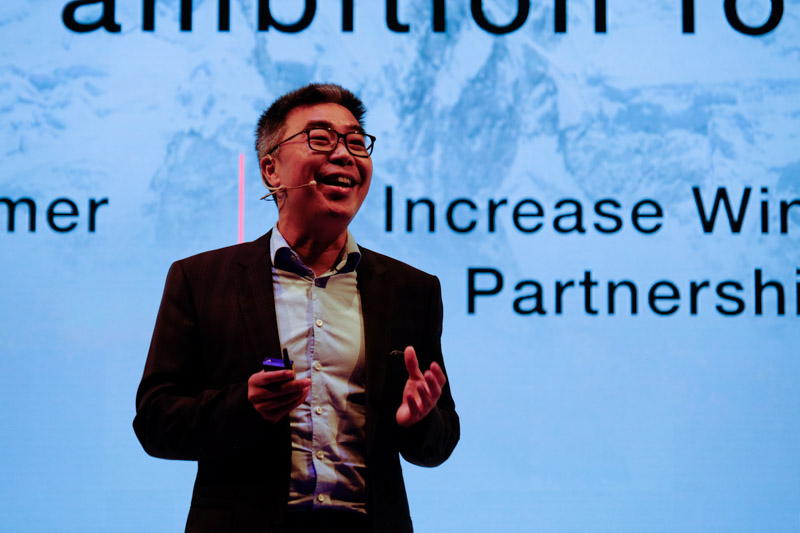 Did you know that Huawei has become the number three smartphone player worldwide, just behind the likes of Samsung and Apple? Over the last year, their presence in the Southern Pacific region has grown to over 10,000 stores, an increase of 40% compared to 2015, and a 1000% increase when compared to 2014.

This was shared at Huawei’s Southern Pacific Brand Conference in Bali, and Peter Tong, President of Huawei Consumer Business Group Southern Pacific Region, kick-started the session by giving a brief presentation on how the company is moving from purely B2B (business to business) to include both B2C (business to consumer). 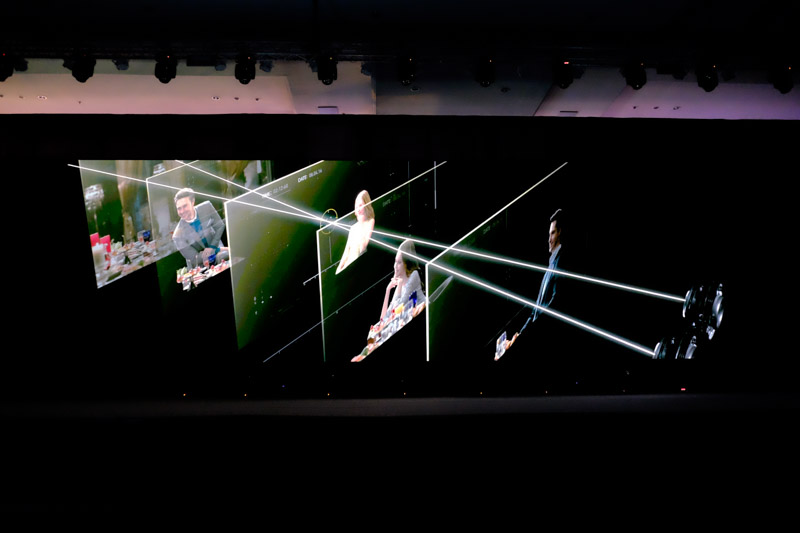 So, it was with much excitement that the company announced their latest dual-camera smartphones - the Huawei P9 and P9 Plus. The headlining feature for both cameras? A dual-lens camera that was co-engineered with Leica. One lens captures to a RGB sensor to focus on getting the best colors, while the other captures to a monochrome sensor that focuses on getting depth and detail. (If the dual camera setup sounds familiar, it's because the old HTC One M8 used to feature a somewhat similar configuration but its implementation is different.) 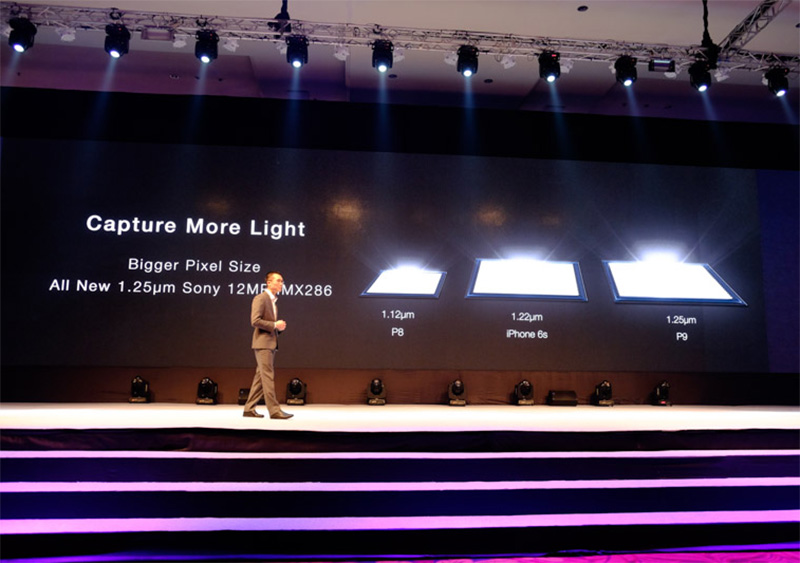 Combined, the information from both sensors is meant to give you great images in lowlight as the dual-camera design allows for more light and detail to be picked up. Using a lower 12MP resolution also allows for a larger pixel pitch.of 1.25μm as compared to the previous P8(1.12 μm), and even the iPhone 6s (1.22 μm). This certainly helps to capture more light and improve sensitivity.

Thanks to the partnership with Leica, color simulations akin to what you might find on Leica cameras can be found in the P9, giving you Leica colors. Three options are available on the phone - Standard, Vivid and Smooth. But obviously having a true monochrome sensor means you’ll get great black and white images too. 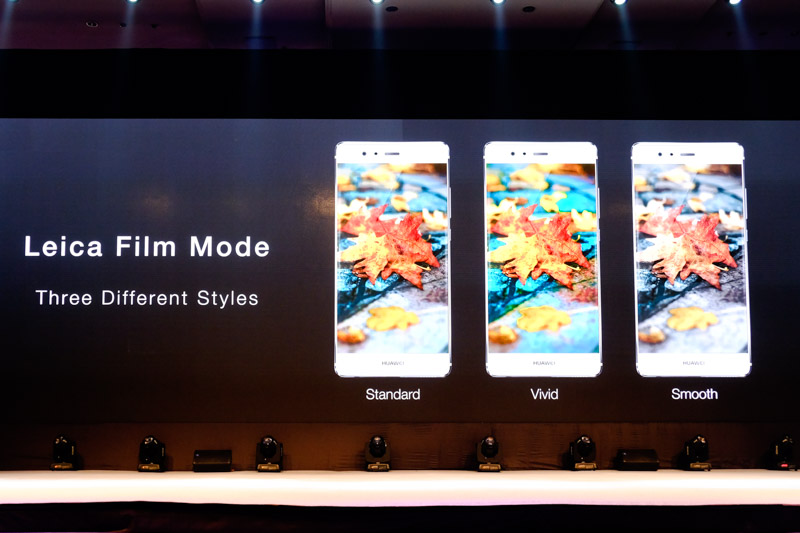 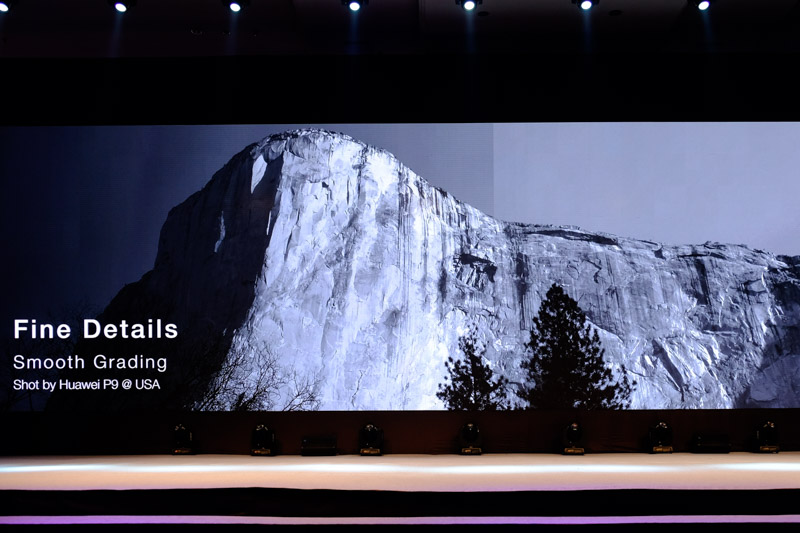 This, paired with their new wide-aperture mode, allows you to truly experiment with aperture values to see what sort of result you would yield, as the mode captures images with all the depth information preserved. This means that you can select a different focus point after the shot, and even re-adjust aperture value to see the result, quite like what you might be able to do with a Lytro camera. 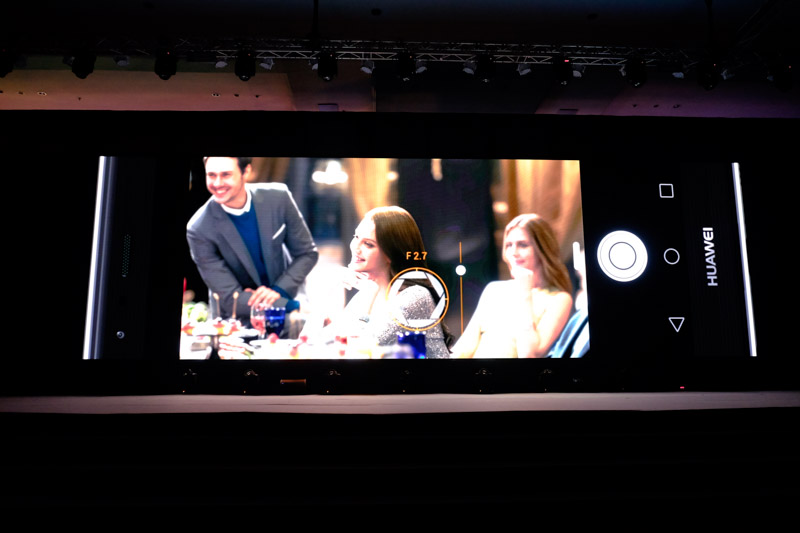 We're told the interface and even the shutter sound of the camera are taken from Leica, and the phone certainly has a very full-featured camera app, with everything from time-lapse to HDR to of course, a dedicated Beauty photo mode, and there’s even a Beauty Video mode.

Placing the camera in Pro mode even allows you the option to shoot in RAW (DNG) format while giving you full control over ISO, shutter, and the focusing and metering methods as well as offering white balance and compensation options. 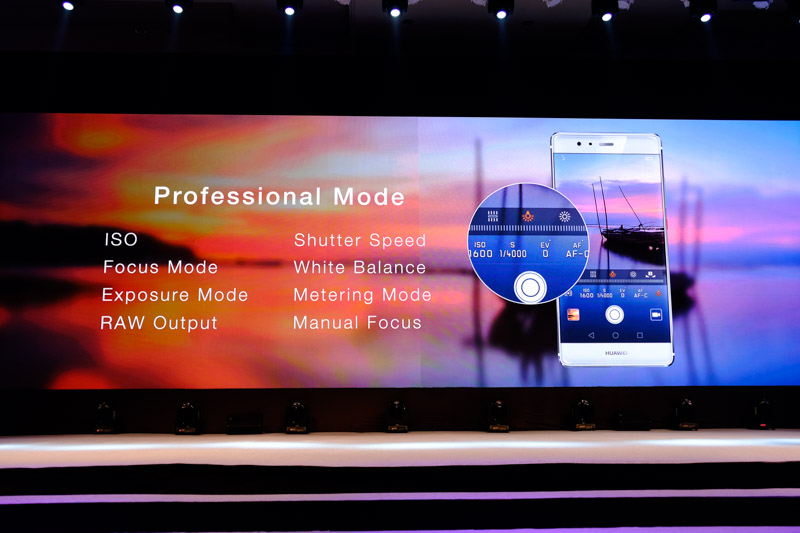 In terms of physical design. the P9 itself extremely slim at just 6.95mm and Huawei took great pains to allow the camera modules to be flush with the surface of the phone. This keeps them from getting scratched so easily, and allows the phones to be slimmer than the competition, as you can see from the slide below.

The display on the P9 is certainly a very respectable one too, measuring 5.2 inches across with a 423ppi count and 96% color saturation. It extends almost to the ends of the phone breadth-wise, and has a slightly raised bevel. 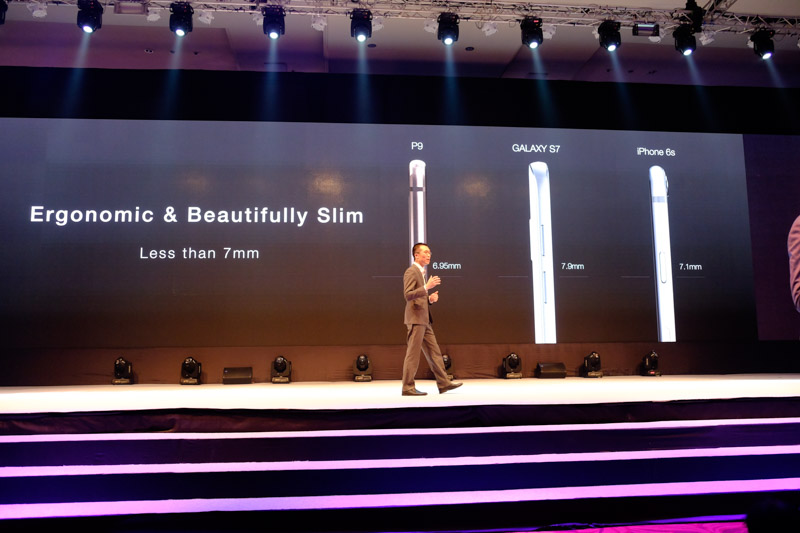 Fingerprint security is also quite impressive, as it takes into account the depth of the individual ridges when conducting identification over four levels. Put simply, it means a simple photograph of your fingerprint won't fool it! 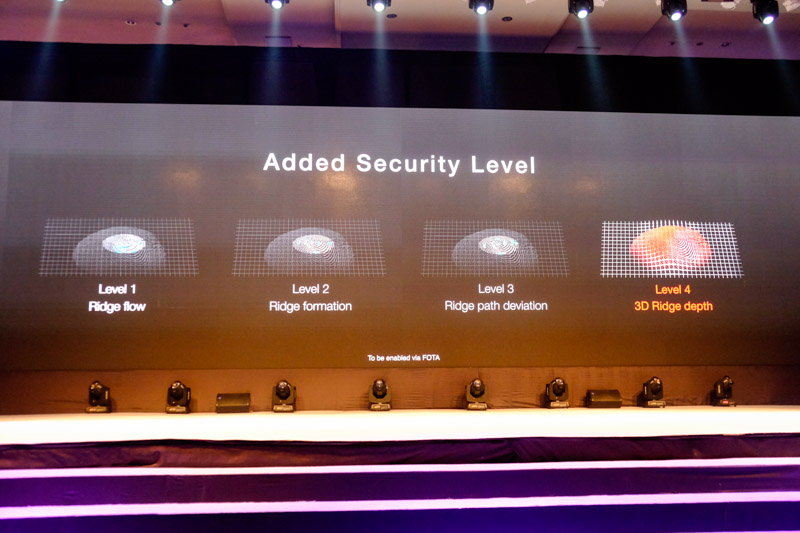 The P9 Plus on the other hand, shares a largely similar design but with a larger 5.5-inch Press Touch display that works much like Apple’s 3D Touch, allowing you to activate different functions depending on how hard you press. The P9 Plus will have two levels of sensitivity and 18 native apps are already supporting this feature.

The P9 Plus will only be slightly thicker than the P9 at 6.98mm, and besides the better display, will also pack in better speakers whether held vertically (where the earpiece will play treble and the speaker plays bass) or horizontally (where both will play in stereo). 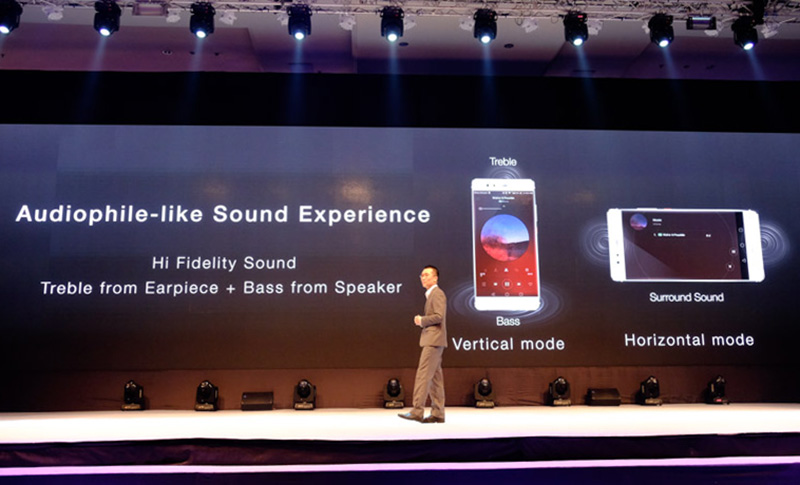 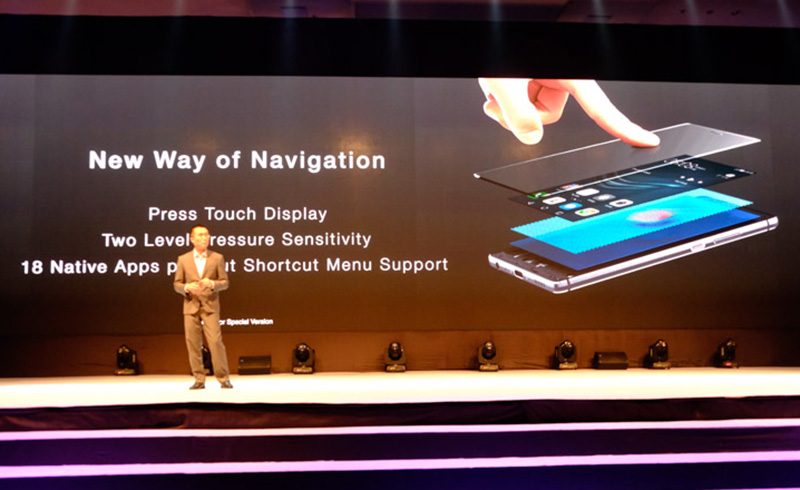 Battery life will also be better, thanks to a larger 3400mAh battery (compared to 3000mAh on the P9) that’s said to allow for up to 14 hours of HD video, up to 9 hours of 4G browsing, and up to 65 hours of music playback.

The P9 Plus will also come with dual-IC Rapid charge which gives you up to 6 hours of talk time from just 10 minutes of charging! 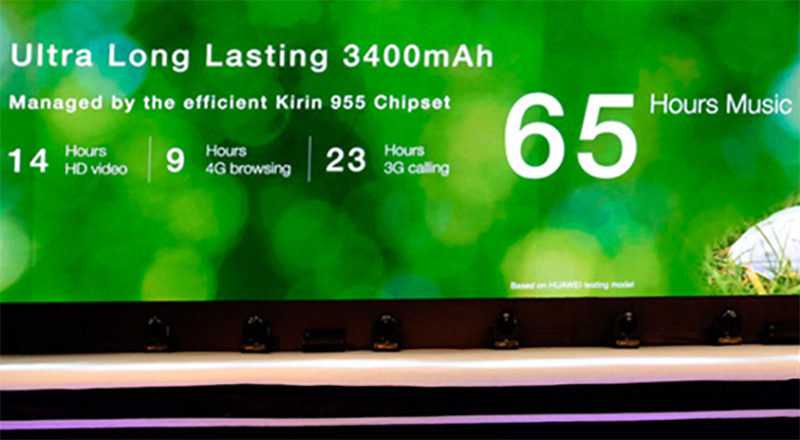 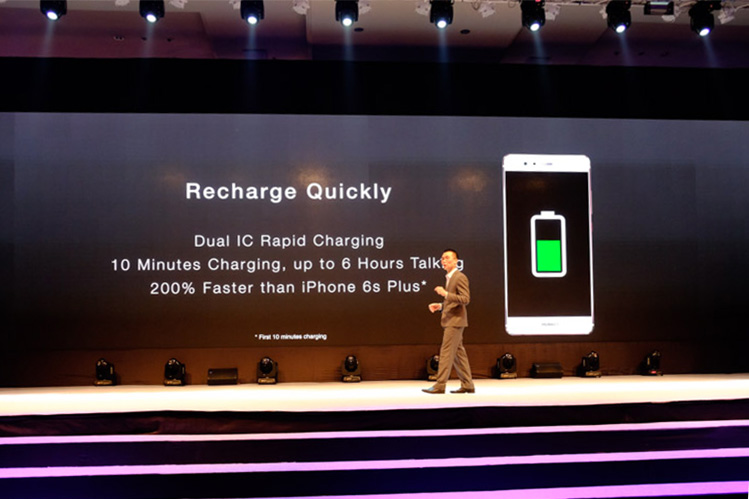