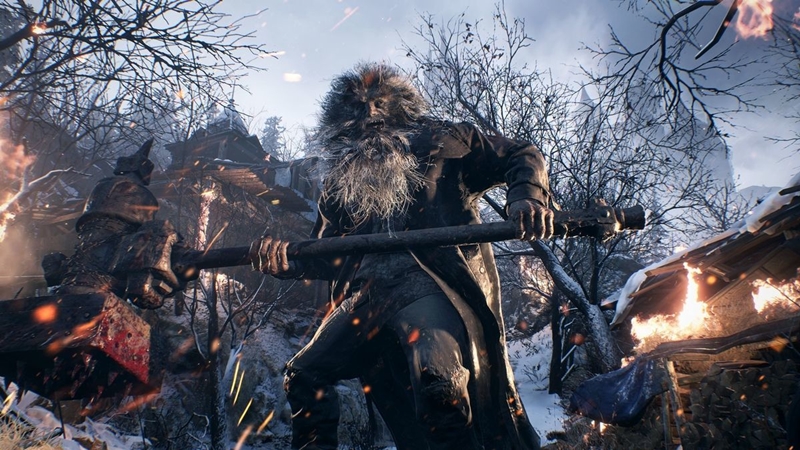 Hello gamers, and welcome back to another edition of the HardwareZone Games Playlist!

By comparison, May seems like a pretty straightforward month. April was stacked with a variety of different genres, though unsurprisingly, NieR: Replicant seems to have taken the cake. And based on our review, it probably ate it too.

Anyway, you could say May is much more "streamlined" in the sense that its best releases home in on a single genre - it's a pretty loaded month if you're looking for some new RPGs to play, and we've got a great spread to share with you. From tall vampire ladies with razor-sharp claws to hordes of ravenous zombies and even adorable gun-wielding animals with mad kung-fu skills, there's a lot to see and do.

Our first pick of the month also happens to be the most hotly-awaited one, and for good reason too; it's Resident-freaking-Evil. After being kidnapped by Chris Redfield to a mysterious village somewhere in Europe, Ethan Winters must once again contend with forces beyond mortal comprehension and reason. From 10-foot-tall vampires to monstrous werewolves, vicious mermen, and even creepy sentient puppets, he's certainly got his work cut out for him.

Not only does the game look absolutely bonkers, but the numerous demos Capcom has released so far have proven to be very well-received by the community as well. Don't worry if you've missed them, though - there's apparently one final week-long window scheduled to go live on May 1. In short, we're not missing this one for the world.

The adventures of Robin Hood is well-worn territory by now, but this new title from Focus Home Interactive based on the popular folk hero opts for a much more brutal (and interesting) approach. It ditches the green tights and jolly faces of Sherwood Forest for a darker reimagining of medieval England, and the people call out in desperation for a hero to stand up against the oppressive government. Although the game retains Robin Hood's core mantra of fighting for the people, mercy is no longer an option - it's kill or be killed.

Gameplay-wise, players will group up in teams of four to take on other 4-man teams as well as the AI-controlled State in intense PvPvE multiplayer heists. There are no holds barred this time - be it stealth, trickery, assassination or pure brute force, use whatever method you need to walk away with the loot.

Welcome back, Commander. It's good to see you.

Honestly, this game needs no introduction - Mass Effect as a series has become somewhat synonymous with galactic heroism, and with the Legendary Edition, the fate of the universe lies in your hands once again. Take up arms as N7's legendary Commander Shepard, form your crack squad of operatives and relive the crew's full trilogy of adventures. In fact, if you're keen on picking up the upcoming Mass Effect title (as many of us are) that BioWare showed off, I can't think of a better way to get back into form.

Granted, this isn't exactly a new release, but Bend Studios' Days Gone remains one of the more interesting takes on the zombie genre that we've played. Rather than just going around busting caps left, right and center, Days Gone actually has a darn fine narrative fraught with brotherhood and introspection.

The game centres around Deacon St. John, a rough-and-tough biker who rides around a post-apocalyptic Colorado with his buddy Boozer. A pandemic has swept through the world turning all infected people into zombie-like creatures called Freakers, and although the gameplay formula is technically par for the zombie game course, it's the emotional ride that really makes it stand out. And now, you can check it out on PC!

Arguably the cutest pick on our list of games for May, don't let the characters' small stature fool you: they pack some serious combat skills. Developed by Experiment 101 and published by THQ Nordic, the adorable gunplay-meets-kungfu animal RPG Biomutants is our closing act for the month. In terms of gameplay, you could say it's a cross between Horizon Zero Dawn and Spore - blending open-world adventure with the ability to re-code your character's genetic structure as you progress. Granted, it might not be the most groundbreaking game in existence, but we think it more than makes up for it with the sheer diversity of its combat system and...hey, is that a flying carpet?

Of course, there's also an open-ended narrative to go with all of that, and your choices will heavily affect the outcome of your adventure. So, whether you end up uniting the tribes to save the Tree of Life or sowing discord and watching the world burn before your eyes - the choice is yours.