The Advent of Low Voltage Memory

The Advent of Low Voltage Memory

Perhaps it's the realization that climate change is indeed occurring, but the eco-friendly trend has been appearing in many products, from headlining hybrid electric cars to unheralded energy saving light bulbs. In terms of PC components, the 80 PLUS initiative for power supplies and the various clockgating technologies found in processors all help to save you that little bit of energy that add up to a significant amount over time.

It may make more sense for giant server farms but nowadays even desktop PCs geared for high performance have components that are relatively energy efficient. This trend has also spread to the memory segment, with companies releasing low voltage variants that draw less power than the standard JEDEC DDR3 specification of 1.575V. While some of the earlier DDR3 modules have been rated at as high as 1.9V due to their high frequencies, most brands have since lowered that, what with Intel's Core i7 platform mandating a 1.65V upper limit. 1.65V remains the most common voltage for DDR3 memory modules, but some vendors are going for even lower voltages, with the newer low voltage versions coming in at 1.35V or even lower. In fact, to help propagate low voltage standards, JEDEC published the DDR3L memory standard recently.

Of course, with memory modules comprising such a small proportion of the overall system power consumption, it's easy to dismiss the power savings as negligible in the grand scheme of things. Take for example a large office with hundreds of systems or servers with large volumes of memory - in both scenarios, the small reduction in power consumption should go a long way to save power and costs. However, if the performance (and price) of these low voltage memory is competitive enough with the typical memory modules, does it even matter if the savings are not that much? To find out exactly how well they perform and how much actual power savings, we scoop out four DDR3 1600MHz memory modules from G.SKILL, Kingmax, Kingston and OCZ. Many other memory vendors have plans to introduce equivalent products, but for now, these four vendors are making headway into this new territory.

Not all of these memory modules are rated at 1.35V - the Kingmax and OCZ are rated at 1.5V - but they are indeed lower than the 1.65V that we're used to see for DDR3 1600MHz memory, like our previous memory shootout last year. So without further ado, here are the contenders: 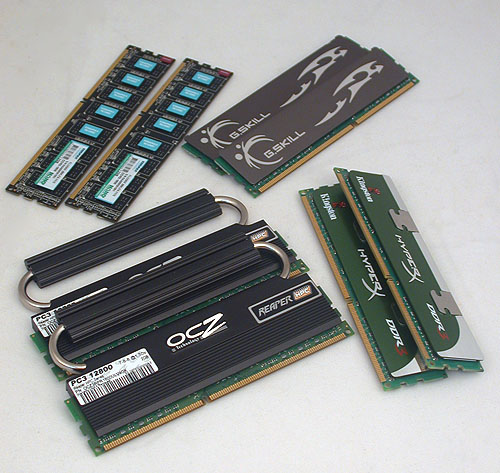