The Liberation of Sound

Freedom In A Box

We've had our brush with AirPlay-enabled speakers. Among them is the Philips Fidelio Soundsphere DS9800W Docking Speakers subjected to our score cards back in April. Of course, Philips isn't the only player in the field to tout Apple's wireless streaming technology besides Apple themselves. Making its maiden appearance here is Libratone, a Scandinavian-based audio firm who shipped their goods over to Singapore in June with two key product lines in tow - the Libratone Live, a compact, vertically-inclined speaker box, suitable for smaller rooms in your living space; and the Libratone Lounge, a single-piece speaker system designed to complement a large-screen television. Both series support AirPlay, thus implying they are compatible with Apple's latest slew of iPhone, iPod, and iPad gizmos. They also tout Libratone's patented FullRoom acoustic technology, based on specially angled speakers to provide a wider and immersive spatial field. The Copenhagen company's modus operandi stresses mainly on versatile speaker placements, which they've dubbed as 'freedom in a box' in their collaterals. Today, we had a chance to visit the Ei8ht Riversuites showroom to experience these wireless speakers for ourselves. Here's more on the Lounge and Live series. 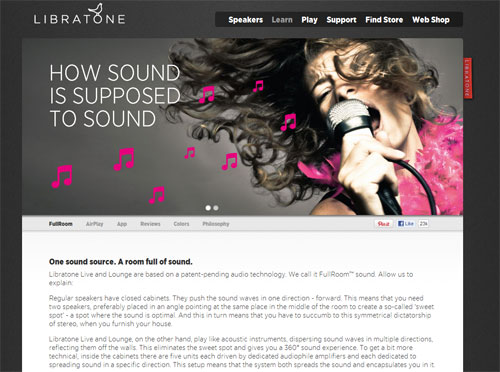 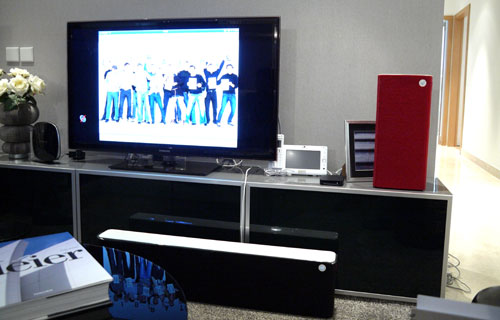 The Libratone Live comes in a small package, measuring just 47cm tall and 19.5cm wide. Designed to be placed on shelves or tabletops, the Live series is meant to complement modern home decor with its compact and minimalist profile. They are available in three colors with the red flagship model being the most expensive of the lot. They are priced as follows: Red - S$1,299, Black - S$1,199, and Grey - S$1,199. The interchangeable speaker grilles are fashioned from Italian cashmere, and based on Libratone's advice, it's best not to rub the woolly material to prevent it from fraying in the long run. Unfortunately, the speaker covers are not available as standalone accessories in the meantime.

A brief demo was also conducted to showcase the Live's acoustic prowess via AirPlay. Due to AirPlay's limitations, users can stream up to six Libratone speakers simultaneously via a MacBook or a Mac, but only a single connection is permitted with iOS mobile devices. First impressions tells us that the Live's drivers packed sufficient punch to fill a small or medium-sized room. It possessed a crisp acoustic signature, but it wasn't as clean and full as we preferred it to be; plus the lower ranges were only discernible with the volume pumped up. In addition, we didn't quite experience the "360-degree sound" as associated with Libratone's incorporated FullRoom technology. 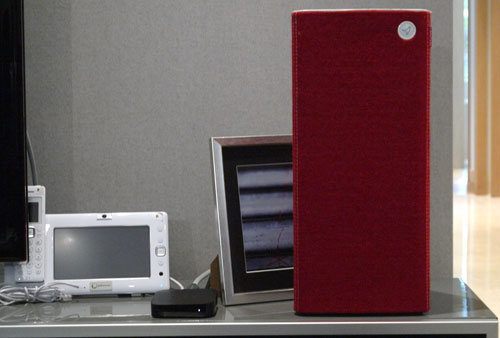 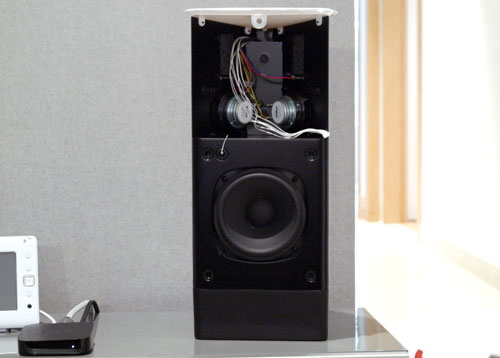 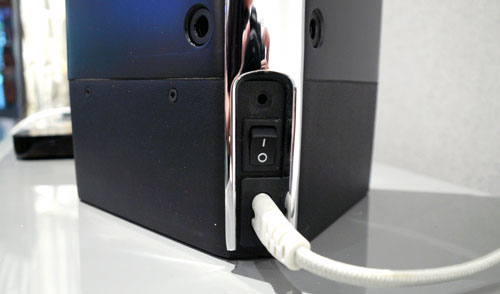 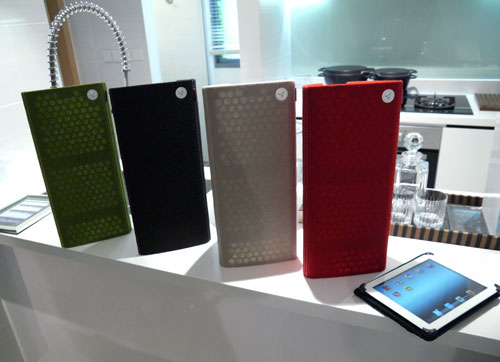 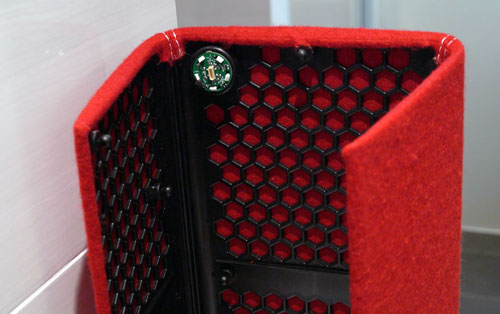 Lounging Out With The Libratone Lounge

Measuring 100cm wide and 22cm tall, the Lounge series would look pretty much at home when mounted just below your large screen TV. Unfortunately, Libratone wasn't able to wall-mount the unit for the presentation since they do not own the premises. A wired audio connection for the Lounge is available in the form of a 3.5mm mini stereo jack for analog or optical digital sources. Housed within the Lounge is a single 8-inch inverted woofer, dual 4-inch ceramic midrange drivers, and a pair of 1-inch tweeters. The Lounge also packs its own DSP (Digital Signal Processor) chip and amplifier unit, complemented by Libratone's FullRoom spatial feature. Like the Live series, the Lounge model isn't equipped with any remote, given Libratone's emphasis on the wireless aspects. Besides AirPlay, users may also download Libratone's app which comes with its own set of EQs and optimization tools. The app is currently available on iTunes.

For the demo session, the Lounge was connected to an Apple TV media receiver via an optical cable. An HDMI cable was then used to send the video feed to the HDTV. Due to the larger drivers involved, its audio delivery was notably fuller and more immersive than its Live sibling. Jazz tracks like Michael Buble's "Me and Mrs Jones" also featured well on the horizontal box. The Lounge is shipped with wall-mount bracket and a 3.5mm-to-TOSLINK cable. It is currently available in black, and is priced at S$1,999. Libratone might bring in more color options if demand is good. 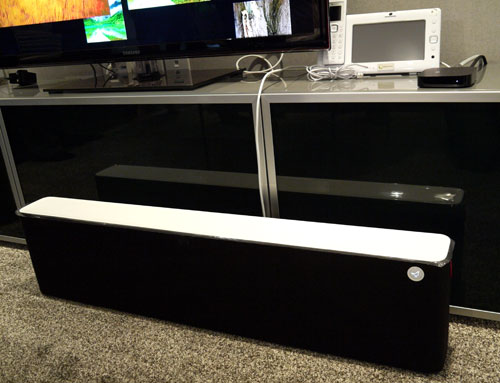 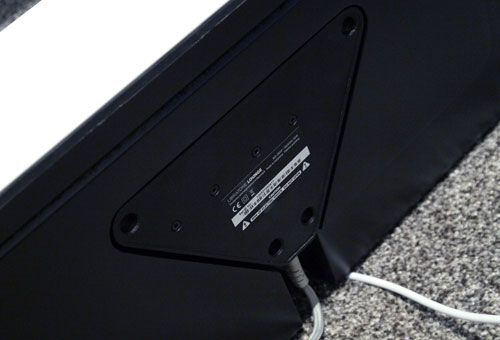 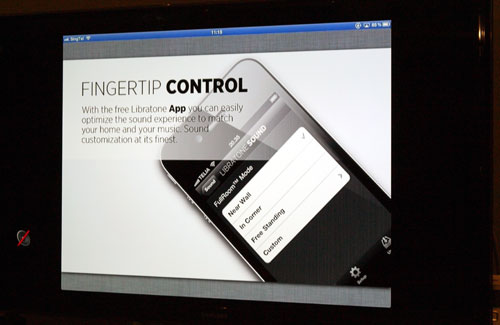 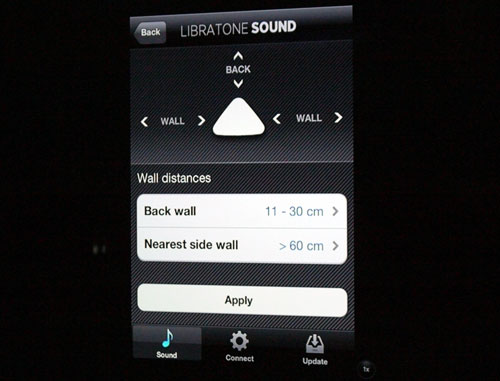 Availability Of the Live and Lounge Wireless Speakers

According to Libratone's spokesman, the Live and Lounge series can be purchased from Apple retailers and consumer electronic stores, such as HMV and Challenger. They are also available at duty free shops located at all three Changi Airport terminals. Alternatively, they can be bought via Apple's US store as well. For more in-depth info on the wireless speakers, do check out Libratone's official site here.