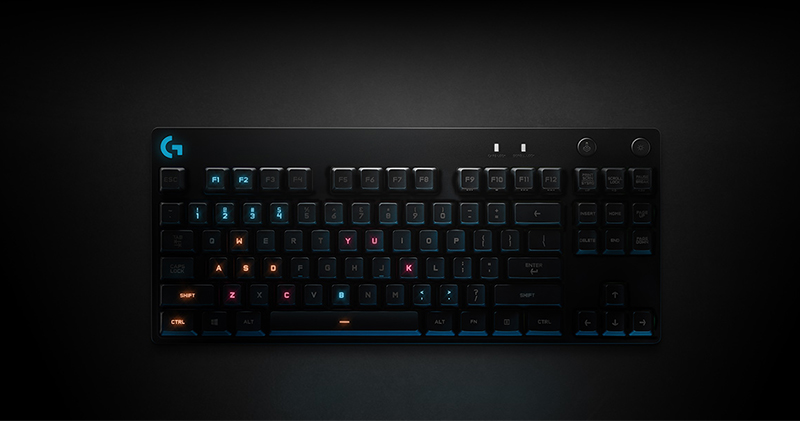 How to win over a gamer

E-sports is taking off in a big way in recent years. From live tournament broadcasts on Twitch to the hype generated around massive US$20 million prize pools, competitive gaming has played a big role in driving interest among more casual players.

And as e-sports continues to gain legitimacy as a professional endeavor, that only means that more and more hopefuls will aspire toward a career as a competitive gamer.

Gaming brands have responded to this by creating products designed for the “pros”, and that’s actually a really good thing, even for the casual gamer.

These peripherals often eschew more garish designs in favor of something more tasteful, and they’ve smartly cut down on superfluous features that just add to the cost of products without burnishing the user experience in any meaningful way.

In other words, you get cheaper and better-looking stuff. What’s not to like?

Logitech’s G Pro series is a shining example of this approach, and the G Pro Gaming Mouse and Mechanical Gaming Keyboard don’t waste any of your time with fancy features or futuristic designs.

Put simply, they just work, and the good news is that they’re pretty good at what they do. 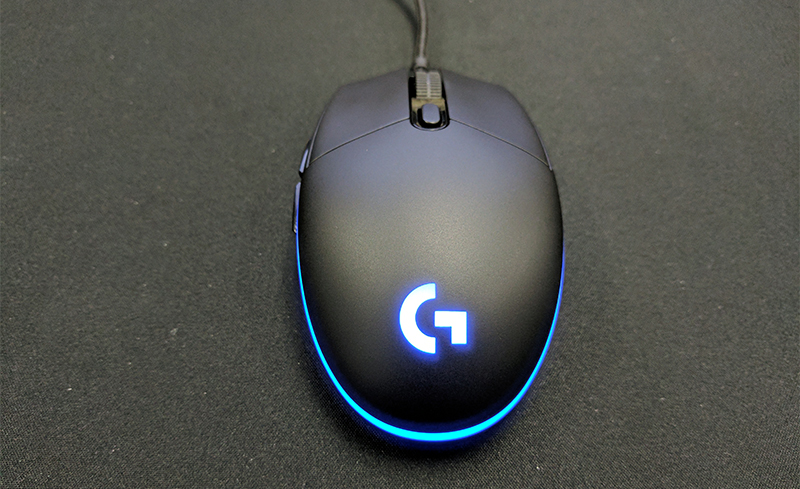 The Logitech G Pro Gaming Mouse can feel like a dream come true for those looking for a mouse that offers only what you can actually use. It combines the best elements of Logitech’s previous mice – the shape of the G100S and the sensor of the G303 Daedalus Apex – into a mouse targeted at professional FPS gamers.

Of course, that’s an awfully specific target audience, and gamers looking for more outlandish lighting effects, a shape more molded to fit your hand, or more buttons will be better satisfied looking elsewhere.

The G Pro is a fairly low slung and compact mouse. It measures just 116.6mm long and 38.2mm high, so that’s something to take note of if you prefer mice with high arches. Having said that, the G Pro takes quite well to both palm and claw grips, and its matte surfaces resist grime quite well even after long hours of gaming. 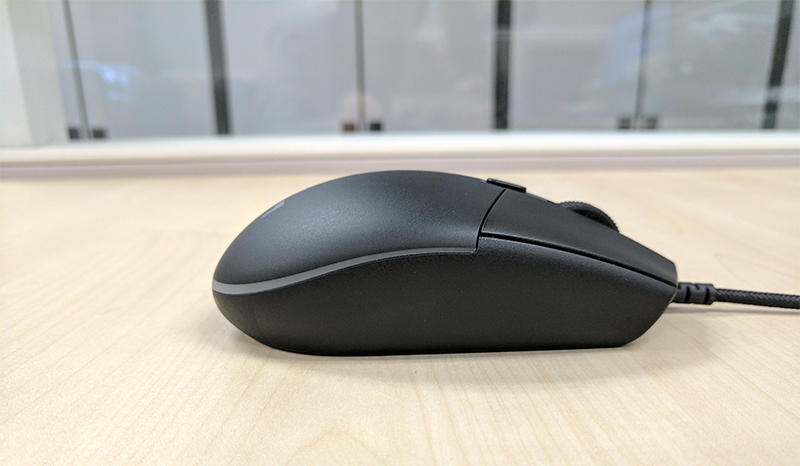 But while it has an ambidextrous shape, the placing of the side buttons only on the left makes this technically a right-handed mouse. Still, south paws will be able to use it provided they are willing to forego easy access to the side buttons, as the Logitech Gaming Software lets you flip the functions of the left- and right-click buttons. 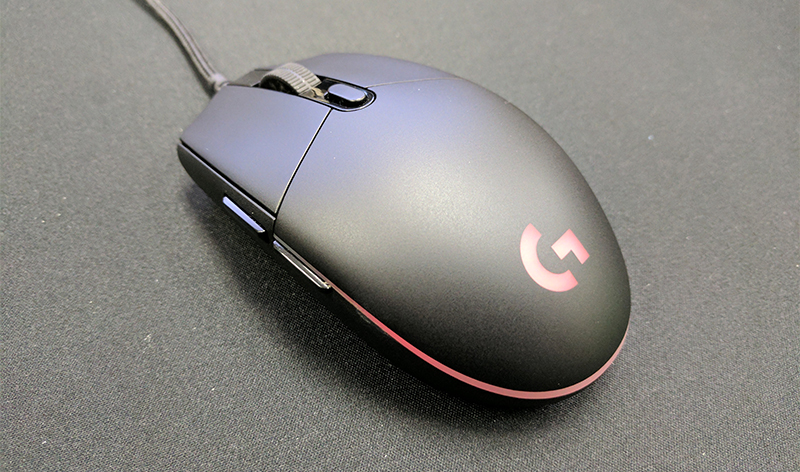 The optical 12,000DPI PMW3366 sensor (this is Logitech’s version of the PixArt PMW3360 sensor) is widely regarded as the best on the market right now, and tracking was flawless across a wide range of scenarios. There was no noticeable acceleration or jitter, regardless of whether we were making quick flicks or tracking moving targets.

Lift-off distance was also low, so low-sensitivity gamers should have little trouble when repositioning the mouse. 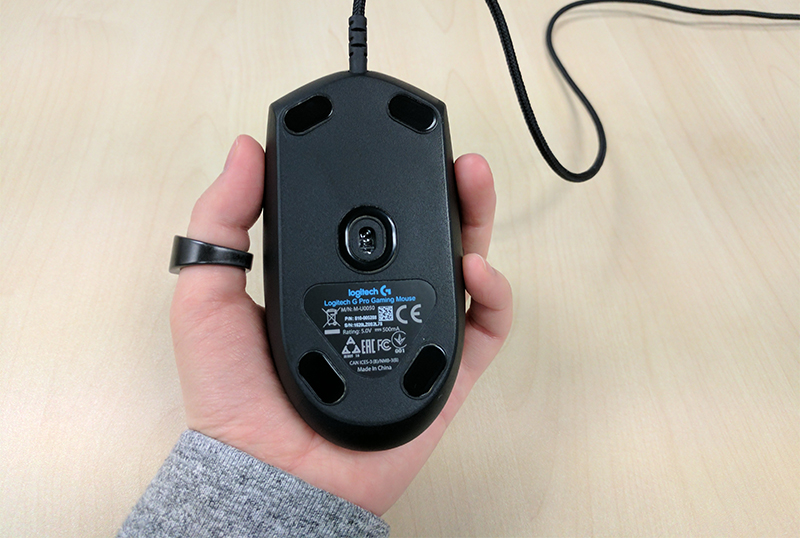 More importantly, the mouse is light, weighing only 83g (without cable), a very important factor for FPS gamers. A heavy mouse can interfere with quick movements and cause fatigue over long hours, so a lightweight body is essential.

A dedicated DPI button sits below the scroll wheel, allowing you to toggle between different DPI steps on-the-fly. The mouse supports up to five DPI steps, which can be stored on the onboard memory and accessed on a different PC.

You can choose between 200 and 12,000DPI in 50DPI steps, which allows for fairly fine-grained adjustments.

The scroll wheel itself is a rubberized affair with distinct ridges, and there’s a nice resistance to each notch so you won’t find yourself overshooting your target if you use it to scroll through your weapon inventory. There’s no side-scrolling function as on mice like the G502 Proteus Core, but you’ll probably not miss it if you’re going to use this mouse primarily for gaming. 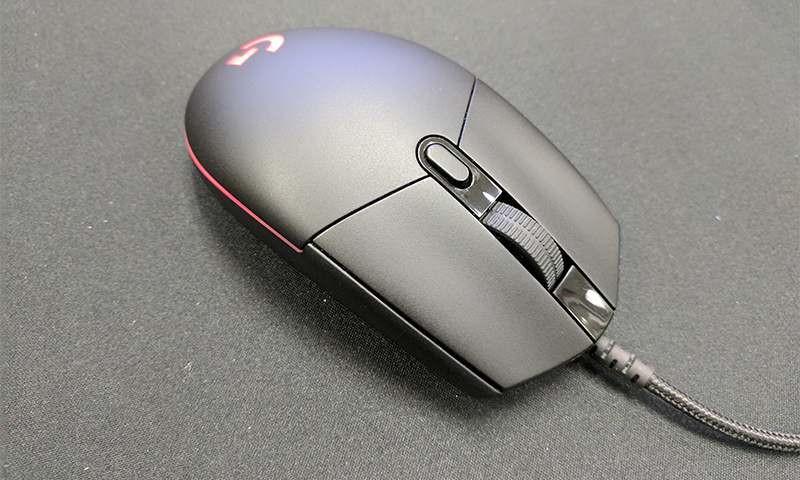 Finally, the two side buttons sit right below your thumb, but some of you may find them a tad bit narrow.

It isn’t often that a gaming mouse seems well-suited to someone with smaller hands – the side buttons are often located too far forward for instance – but the G Pro fills this role admirably. That said, that doesn’t mean that the mouse is bad if you’re a large person, but you may probably find a claw or fingertip grip more comfortable.

The left- and right-click buttons produce satisfying feedback as well, and in no way did they feel too sensitive or mushy. 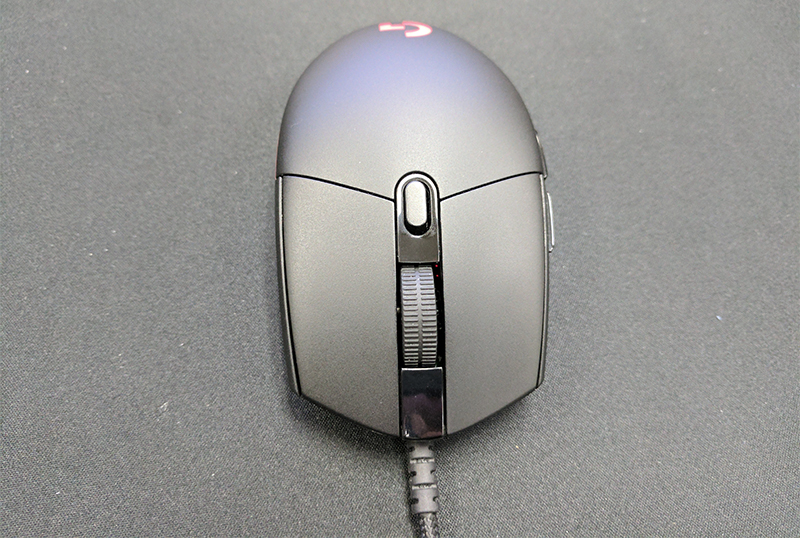 The LED lighting is subtle, taking the form of a continuous light rail running around the bottom half of the mouse. This is quite tasteful, and along with the illuminated Logitech logo on the mouse’s back, can be customized with the Logitech Gaming Software.

The variety of lighting effects available isn’t the greatest, with just options for static, breathing, or color cycle effects, but it helps add some character without going overboard. 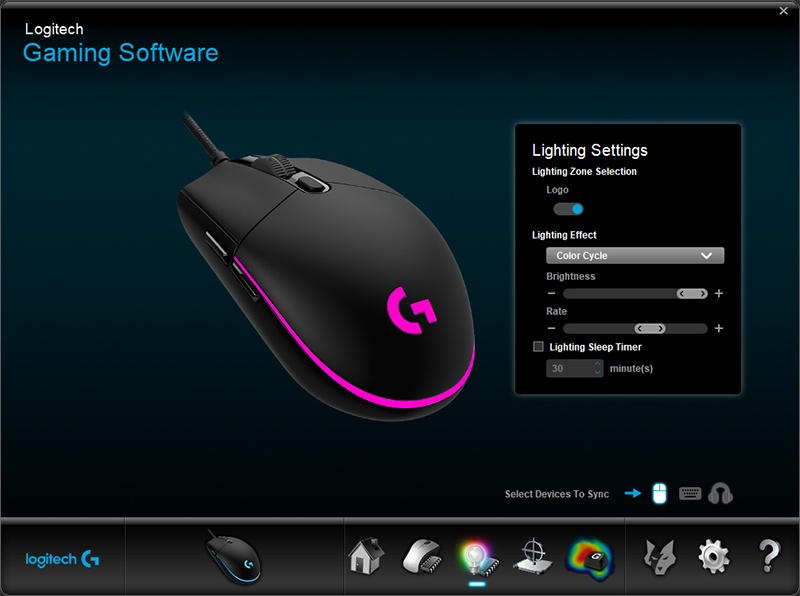 Could the G Pro mouse be improved? Of course. The single DPI toggle button makes switching through the full five DPI steps a bit tedious, and there’s no way to tell which step you’re currently on. Two buttons would have been nice, or at least a feature to save individual lighting effects to individual steps as a way of telling them apart.

It would also have been nice to have some sort of rubberized side grips, as on the Razer Deathadder Elite.

But here’s the thing. Pro gamers probably won’t find themselves switching through different DPI steps that often – they find their preferred sensitivity and stick to it. Furthermore, there’s nothing wrong with the matte coating on the G Pro, and it resists sweat quite well.

Logitech dispensed with these luxuries in favor of a more streamlined design, and it looks to have worked out pretty well. The G Pro costs S$109, so it’s not exactly super affordable, but it is a very reasonable price for the performance and comfort it offers.