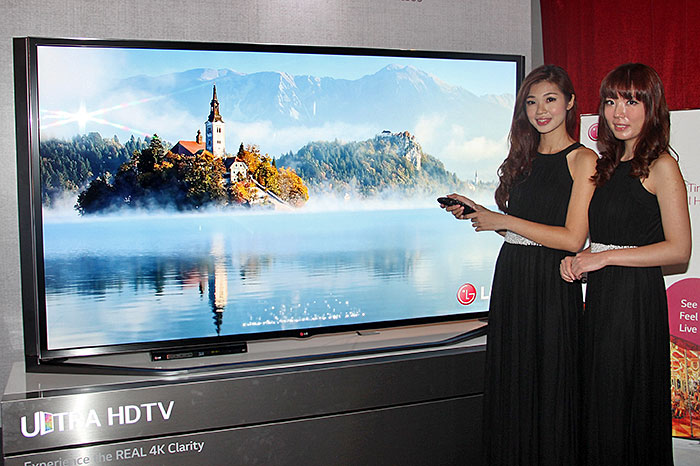 Probably due to an easier (and less costly) manufacturing process, as well as noticeable adoption from consumers, most TV makers are going all out this year with their 4K offerings. For LG, after introducing two new 1080p OLED TVs, we were further treated with no less than seven 4K TVs from three series, with screen sizes ranging from 49 inches all the way to 84 inches.

Sitting at the very top is the UB980T series, which comes in three sizes: 65, 79, and 84 inches. It has the highest UCI (Ultra Clarity Index) of the three series (1,300; though in our opinion, this spec probably isn’t too critical since all their real refresh rates are at least 200Hz), a slightly more sophisticated True 4K Engine Pro that supports an enhanced error-correcting Super Resolution Algorithm and blur-reducing Motion Estimation Motion Compensation (MEMC) tech, a multi-channel (4.2-channel to 5.2-channel, depending on model) frontal speaker system that supports the Ultra Surround mode (and the only one in the three series to earn the 'Sound designed by Harman/Kardon' tag), and a built-in 8-megapixel camera.

Following closely behind are the UB950T (available in 55 and 65 inches) and UB850T series (available in 49 and 55 inches). Like the UB980T, they sport 4K IPS panels for wide-viewing angles and accurate color reproduction, and do 4K 3D (using FPR tech, of course), along with a 4K 3D upscaler and a 3D conversion engine for 2D content. In addition, they support the latest HDMI 2.0 standard, and comes with a built-in 4K HEVC 60p decoder that’s capable of decoding broadcast signals in H.264 and HEVC H.265 in either 30p or 60p.

The sound systems on both the UB950T and UB850T are comparatively weaker than the up-to–5.2-channel system that’s on the highest-end UB980T. To be exact, the UB950T has a 2.1-channel, 35W sound system and the UB850T has a 2.0-channel, 20W system. That said, they still have the new Ultra Surround tech, just not the Harman/Kardon association. And while they don’t come with a built-in camera like the UB980T flagship does, you can still do Skype video calls if you get the optional VC500 camera. All three series support DVB-T2. 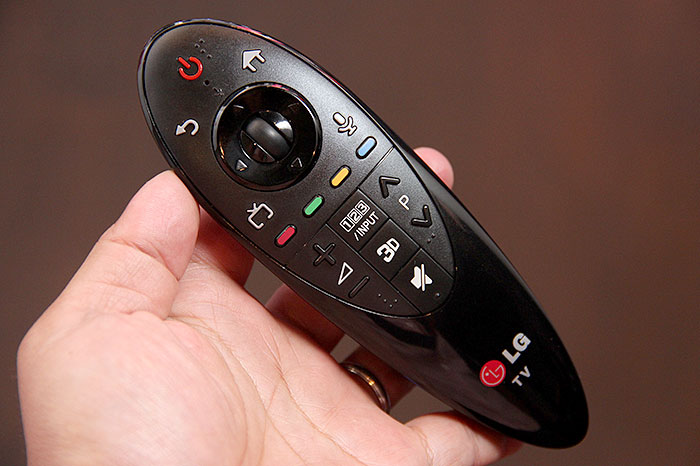 The other big story in LG’s 2014 smart TV lineup is the integration of the WebOS platform, which LG says is on 70% of its 2014 1080p and 4K TVs, including the aforementioned UB980T, UB950T, and UB850T. Purchased from HP in early 2013, it has already been revealed earlier this year that LG is incorporating the widely-acclaimed OS into its smart TV platform.

In brief, here’s what you can expect from LG’s smart TVs (the company actually calls them 'Smart+ TVs') that utilize WebOS:

For the most part, WebOS works really well on these new LG smart TVs, which is no mean feat considering the WebOS team isn't with LG that long yet. It's important to note too that this isn't just another skin; in fact, a lot of these so-called ease-of-use features require deep understanding of user behaviors and complex underlying frameworks to pull off. For example, we're impressed that the TV is able to seamlessly switch and resume playback between two Internet streams. Or how it intelligently allocates resources and tries to keep as many as possible your previous activities 'opened' so that you can get back to them in the least possible time. Of course, Bean Bird is cute, and the little skull icon when you try to close an app are all nice touches that make the smart TV a fun TV at the same time.

LG seems to also understand the fragmentation problem that the whole TV industry faces today, especially when you consider that each TV maker has its own TV app/content store and its own implementations even for basic stuff like streaming media to the TV. According to Mr. Colin Zhao, who is the global director for product management at the LG Silicon Valley Lab (trivia: he was already part of the WebOS team before LG bought it; and he's a 32-year-old Singaporean), this is a big reason why LG is behind the Connect SDK open-source project. In a nutshell, Connect SDK is a software toolkit that developers can use so that it's easy for users to get content on their mobile devices (be it Android or iOS) onto their TVs. Currently, Connect SDK supports the new WebOS TVs, Roku, Chromecast, and Fire TV devices, and LG's 2012/2013 smart TVs. 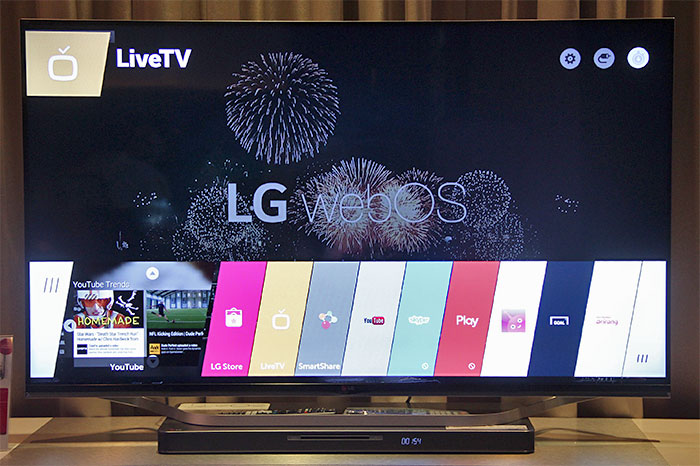 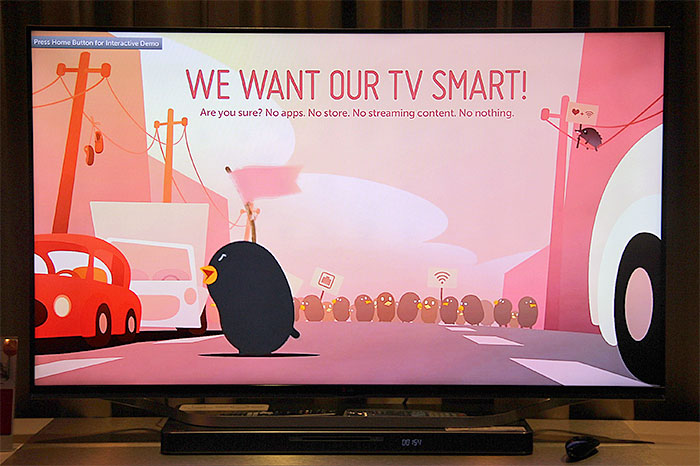 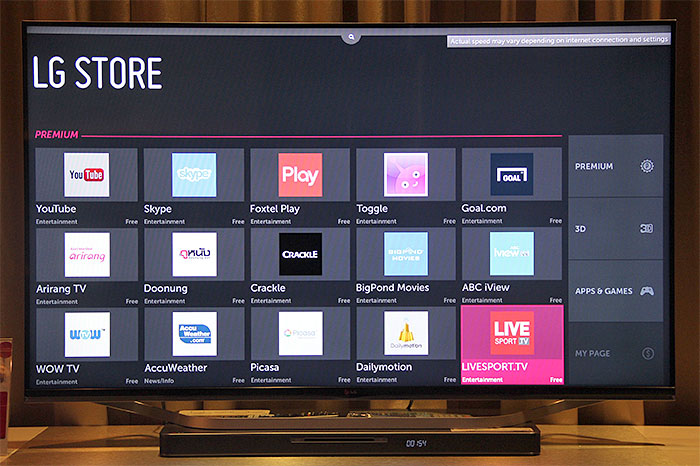 Here's a quick summary of the specs of LG's 2014 4K UHD TVs, courtesy of LG Electronics: 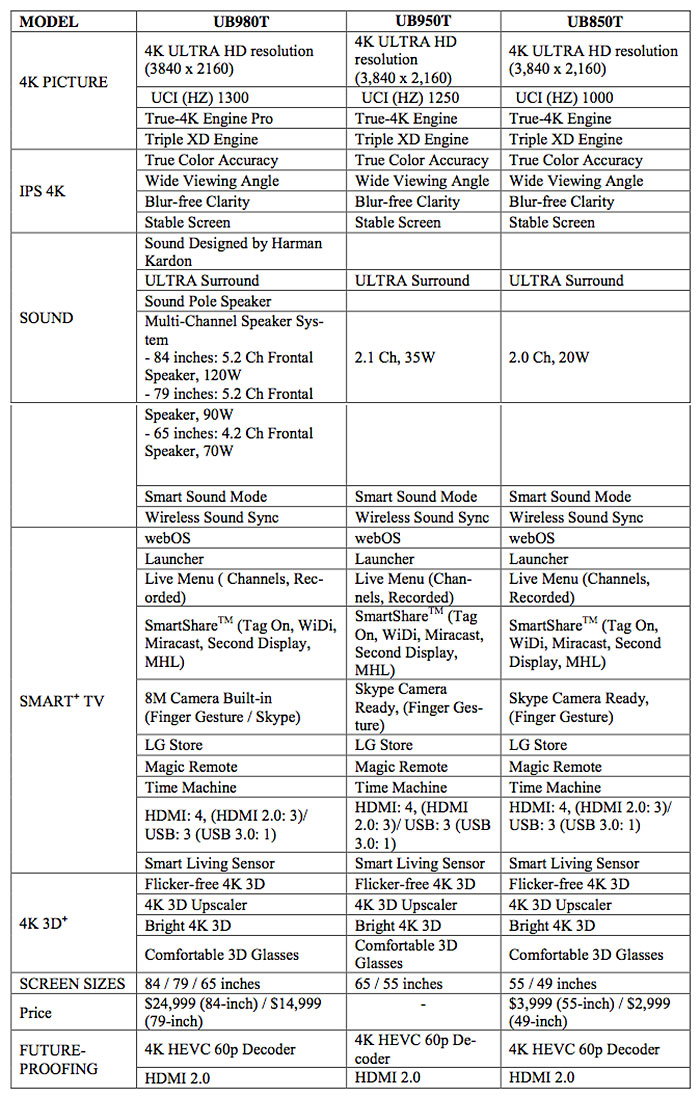