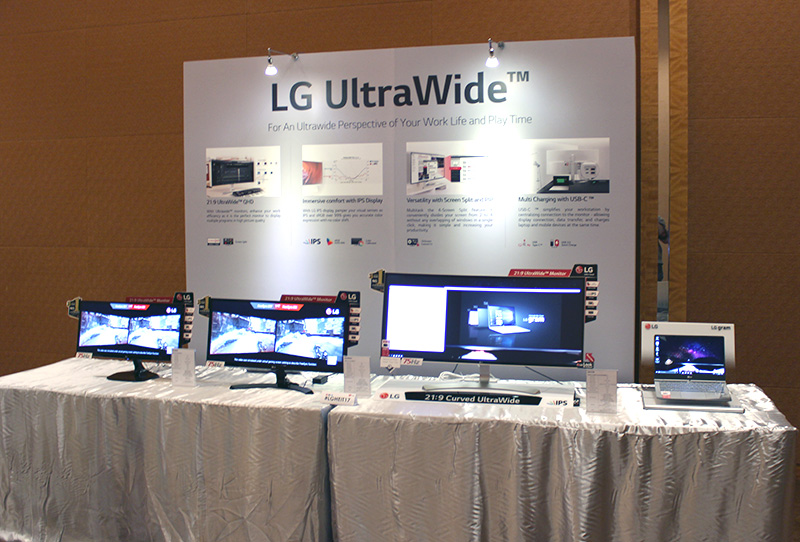 Note: This article was first published on 19th April 2017. 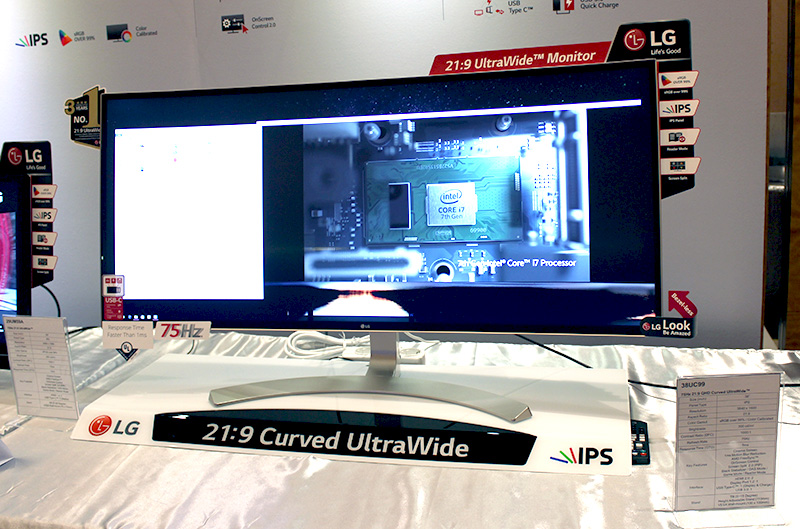 LG’s UltraWide series of monitors are probably the most attention-grabbing of the lot. They’re calculated to turn quite a few heads with their expansive displays, crisp resolutions, and sleek stands, and their wide 21:9 aspect ratio makes them a good fit for productivity mavens and film buffs.

The flagship product is the UltraWide 38UC99, which replaces the 34-inch 34UC98 from the year before at the top of the line-up.

That monitor had a ton of connectivity options, including two Thunderbolt 2 input and output ports, and the 38UC99 retains that spirit with a USB-C port that supports 4K video. Better still, you’ll be able to charge your USB-C smartphone or laptop while it is transmitting data.

This is the first UltraWide monitor to feature a USB-C connector, and it pairs that with two more USB 3.0 ports that support Quick Charge, two HDMI 2.0 ports, one DisplayPort 1.2 connector and a headphone out jack.

The monitor also boasts a 3,840 x 1,600-pixel IPS curved display that covers over 99 per cent of the sRGB color gamut, and a 75Hz refresh rate, which is slightly higher than the more common 60Hz you get on screens with these resolutions.

On top of that, the 38UC99 comes with two built-in 10W Bluetooth speakers, with a Rich Bass feature that boosts sounds in the 85Hz range.

Multi-taskers will appreciate LG’s Screen Split technology, which helps optimize the organization of multiple windows with 14 different multi-window layouts, including a picture-in-picture mode. Alternatively, you can also drag and resize windows to get the layout just right.

The 34UC99 takes things down a notch with a smaller 34-inch IPS panel, a slightly lower 3,440 x 1,440-pixel resolution, and two 7W speakers that do not support Bluetooth. Other than however, it’s remarkably similar to the larger 38UC99 and also comes with a USB-C port that supports simultaneous data transmission and charging.

LG has set an availability date for it in June, with price to be announced later.

But while these displays appear targeted mainly at serious multi-taskers, they can be used for gaming as well. All of them, save for the 25UM58, support AMD’s FreeSync variable refresh rate technology, which allows for a smoother and more fluid gaming experience.

For more details on the rest of the line-up, you can refer to the table below: 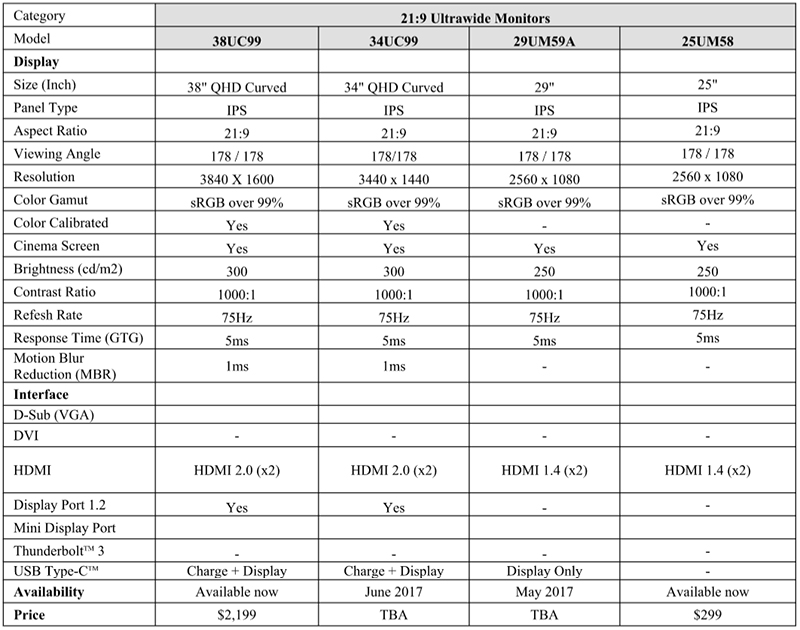 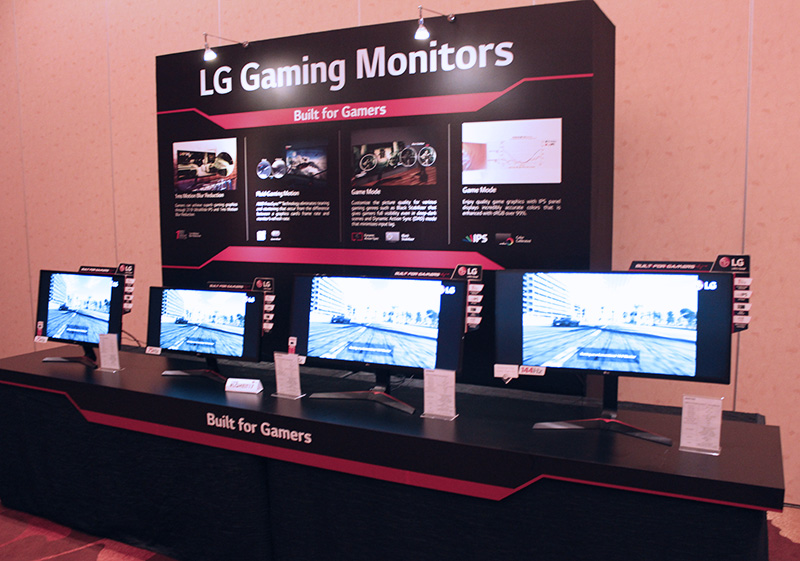 LG isn’t a brand traditionally associated with gaming monitors, but it’s making a serious play in this area with no less than five models with gaming-oriented features like high refresh rates, AMD FreeSync, and more aggressive, red-accented designs.

The star of the series is the 34UC79G, a 34-inch curved IPS panel with a wide 21:9 aspect ratio, a 2,560 x 1,080-pixel resolution, and a butter-smooth native 144Hz refresh rate. The screen’s refresh rate is undoubtedly its most attractive feature as there are few large, curved displays with a refresh rate that high.

It also features a 5ms grey-to-grey (GTG) response time (not the lowest, but it’ll probably do) and support for AMD FreeSync, which minimizes problems like stuttering and tearing. 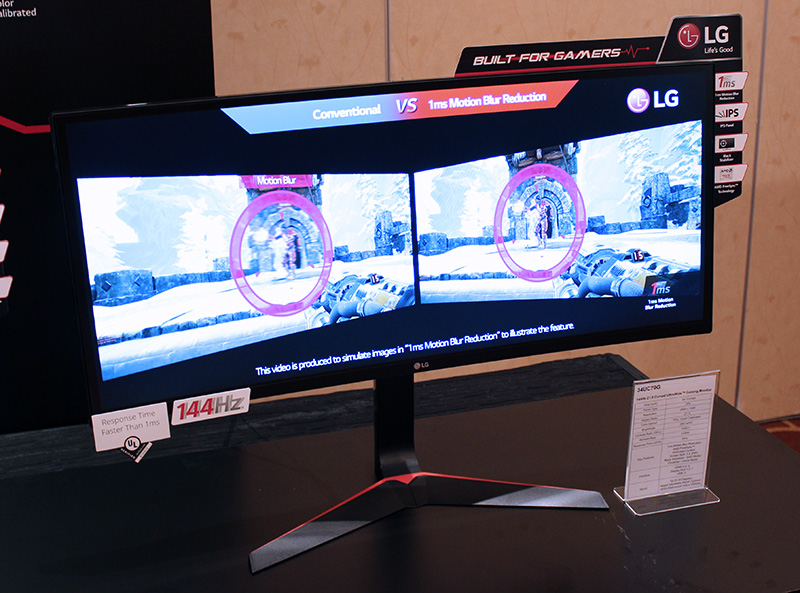 On the other hand, the 34UM69G ditches the curved panel and 144Hz refresh rate (it maxes out at just 75Hz), but it adds in a USB-C port that supports display signals and two 7W built-in speakers.

It is also available on shelves now at S$799.

For an overview of LG’s gaming series monitors, you can refer to the table below: 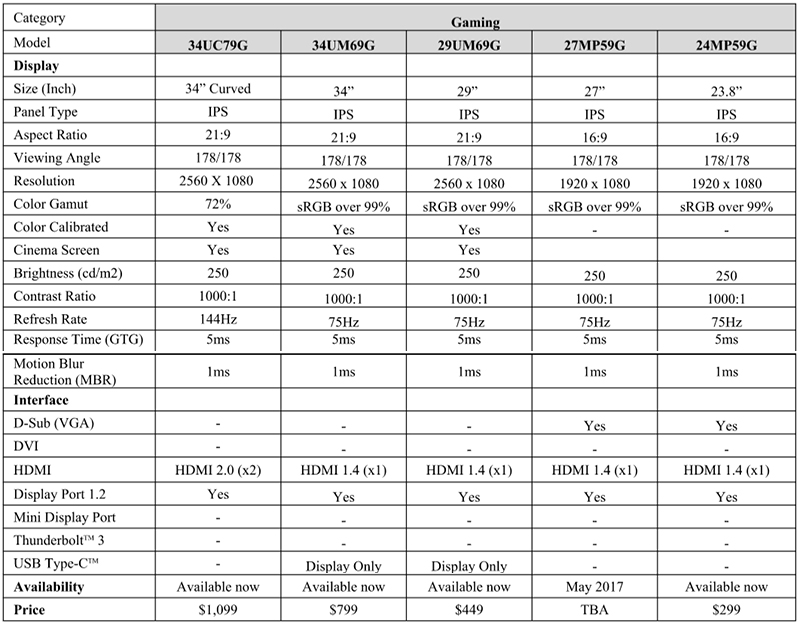 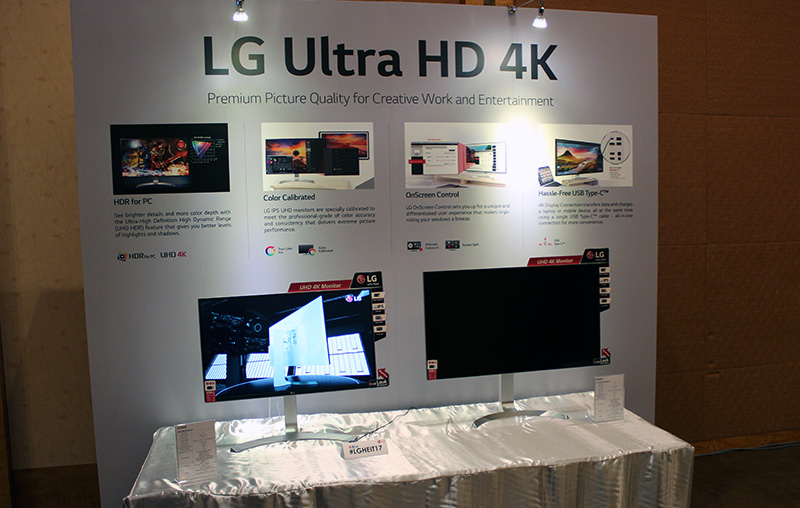 But what if you don’t need crazy multi-tasking capabilities or a gaming-grade panel, and picture quality is your main focus? LG’s got you covered as well with its series of UHD monitors, some of which support HDR for the next-generation of video content.

The most interesting product of the range is probably the new HDR-ready 32UD99, which was first announced at CES 2017. This is a 31.5-inch 3,840 x 2,160-pixel IPS monitor that can display over 95 per cent of the DCI-P3 color space (25 per cent larger than sRGB), which makes it ideal for content creators and other professionals who require accurate color reproductions.

More importantly, it supports HDR10, which translates into a higher peak brightness of 550 nits that can help make photo and video editing more comfortable.

A lot of thought has gone into enabling an upgraded viewing experience, and that’s visible in details like the ultra-thin 1.3mm bezel on all four sides. If you want to go for a multi-monitor setup, the 32UD99 is more than ideal.

The monitor also features a USB-C port that allows it to stream 4K content, charge a connected laptop, and execute data transfers simultaneously with a single cable, thus cutting down on cable clutter. 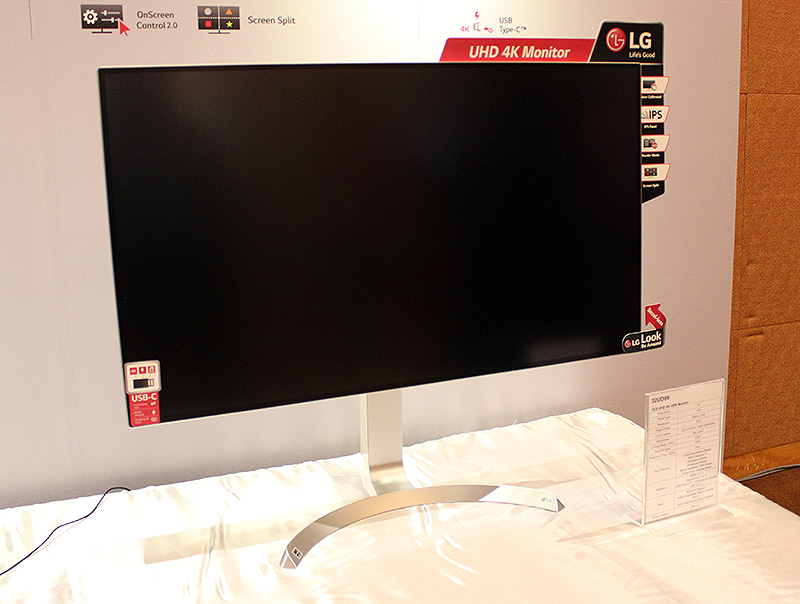 The 32UD99 will be available in June, with price to be announced closer to the date.

For details on the other UHD models that LG announced today, you can check out the table below: 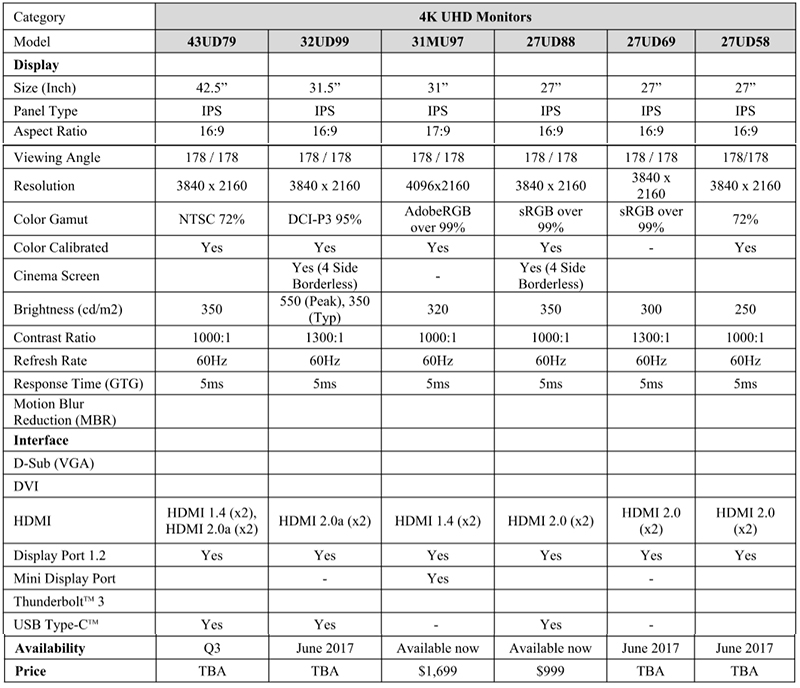 Finally, LG has a selection of more affordable monitors for the casual user as well. Its range of 1080p IPS monitors include 21.5-inch to 27-inch panels, with prices starting a relatively palatable S$219 for the 22MP48.

There are no TN panels here, so you can expect better color reproduction and viewing angles across the board.

These monitors also share some features with their more expensive counterparts, such as Screen Split technology for multi-tasking and a 75Hz refresh rate across the board. The 27MP89 supports AMD FreeSync as well, although it is the only monitor in this line-up to do so.

That said, these are considerably pared down offerings compared to LG’s pricier displays, and you’ll have to be prepared to go without extras such as additional USB ports.

The table below summarizes the key specifications of LG’s latest 1080p monitors: 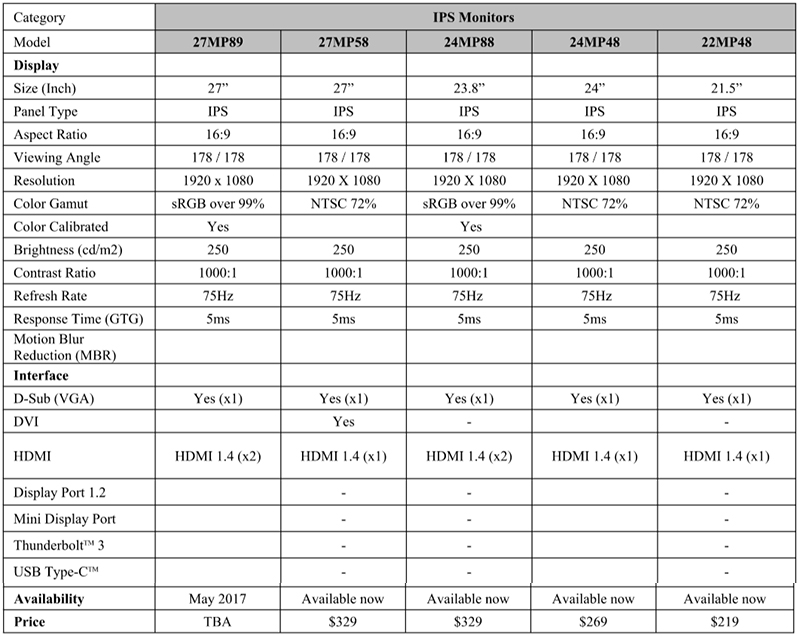