The three LG gram notebooks have very similar specifications so I’m expecting them to put up similar numbers in our benchmarking tests. That said, performance throttling can be an issue with ultra-thin notebooks, so I’ll be keeping a close eye to see if this condition affects the LG gram notebooks.

PCMark 8 tests a system’s performance by putting it through different tasks that reflect the workloads of various kinds of users, for instance the casual home user or the working creative professional. Looking at the PCMark 8 results, the three LG gram notebooks recorded scores that were quite close to each other. Their scores were also comparable against the ASUS ZenBook 3 and ZenBook 3 Deluxe, which are also powered by new and slightly more powerful Kaby Lake processors. It is also clear that the new gram notebooks have a performance advantage over last year’s gram 15, especially in the Creative, Work, MS Office, and Adobe workloads. 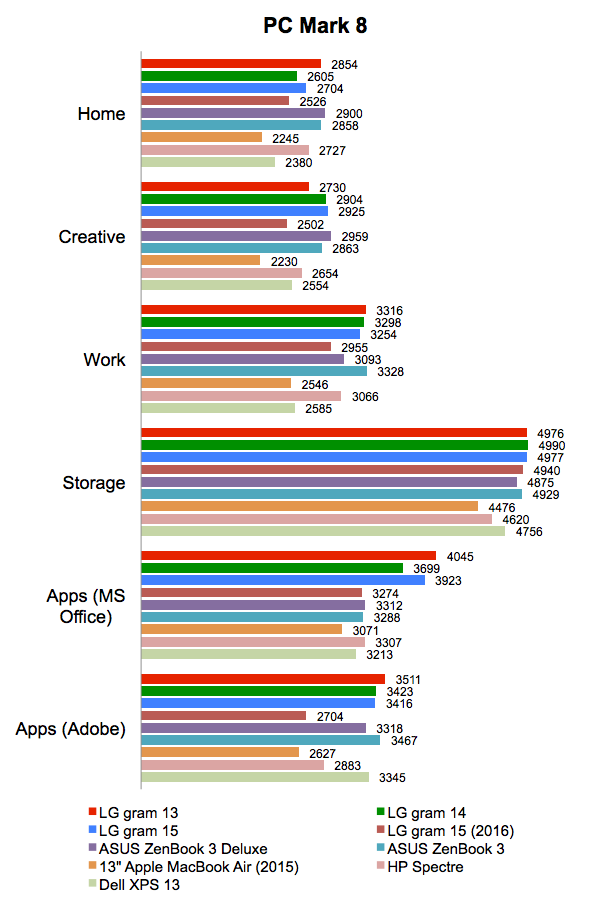 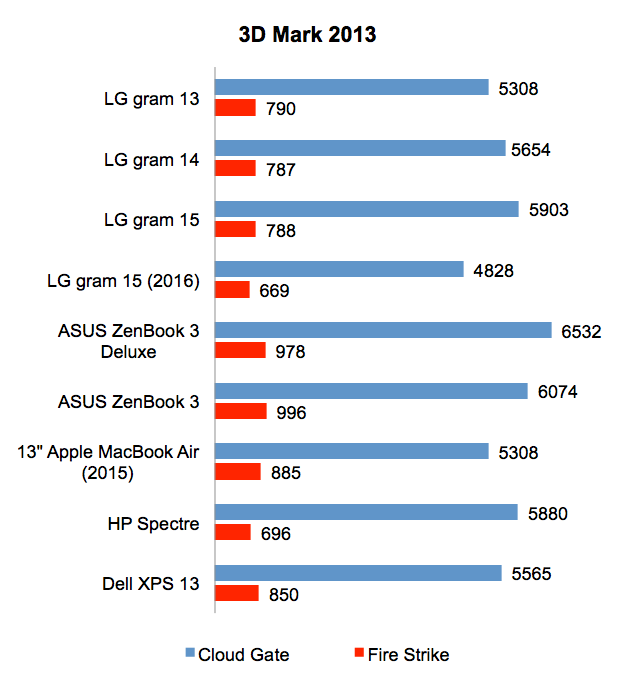 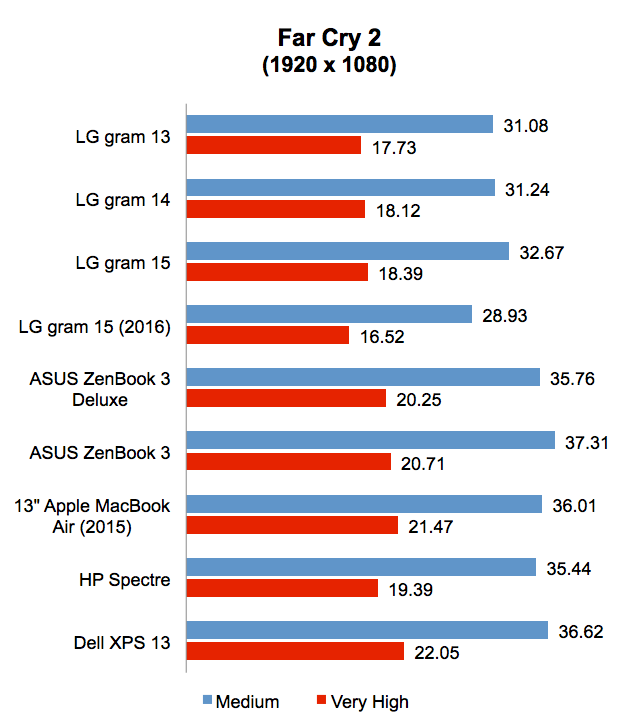 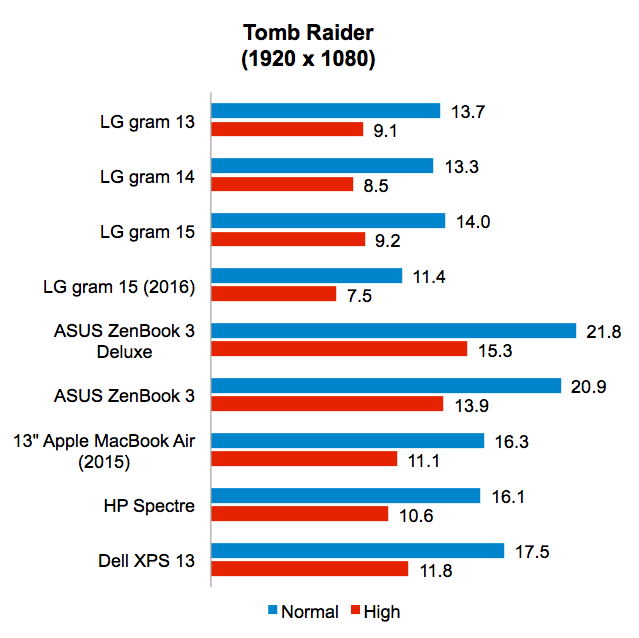 Even more impressive is the gram 14, which lasted a whopping 572 minutes or 9 hours and 32 minutes. This is way longer than other any notebook here. Even the MacBook Air, which has a pretty good battery life of 323 minutes is no match for the new gram 14. And even though the gram 13 has a smaller 34.6Wh battery, it still lasted a very decent 296 minutes - just shy of 5 hours.

Looking at the power consumption figures, we can also see that three gram notebooks are incredibly efficient. Their power consumption figures hover around the 7W mark, which is considerably lesser than the other notebooks. Even the ZenBook 3 and ZenBook 3 Deluxe, which have similar Kaby Lake processors, are not as power efficient. This could be a reason for the graphics performance discrepancy seen earlier and if so, the trade off has no bearing for a true mobile office warrior. 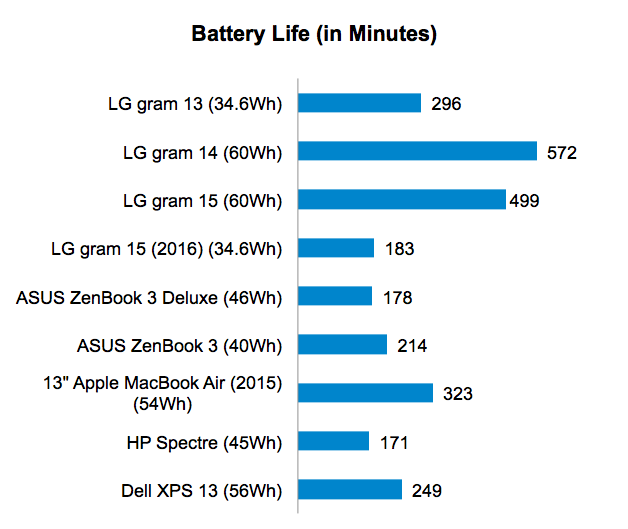 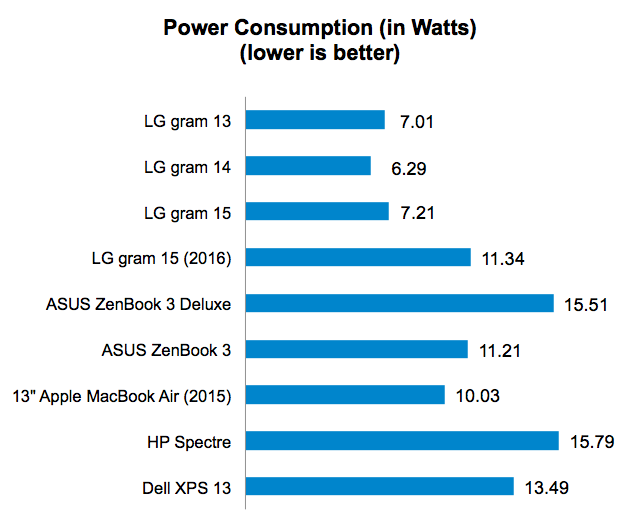 Our Portability Index factors in battery life, weight and volume so you can see which notebook is the most worthwhile to carry around. Given the long battery life of the new gram notebooks, it was unsurprising to see that all three of them scored very highly in our portability index. An interesting thing to note is that while last year’s gram 15 managed a score of only 2.276, this year’s new gram 15, with its improved processor and larger battery, managed a much higher ratio of 6.605.

And expectedly, the gram 14, with its lightweight compact chassis and super long battery life, has the highest ratio here of 7.910.

The gram 13 fared well too with a ratio of 4.609, which is better than other comparable ultra-portable 13-inch notebooks like the Dell XPS 13 and HP Spectre. 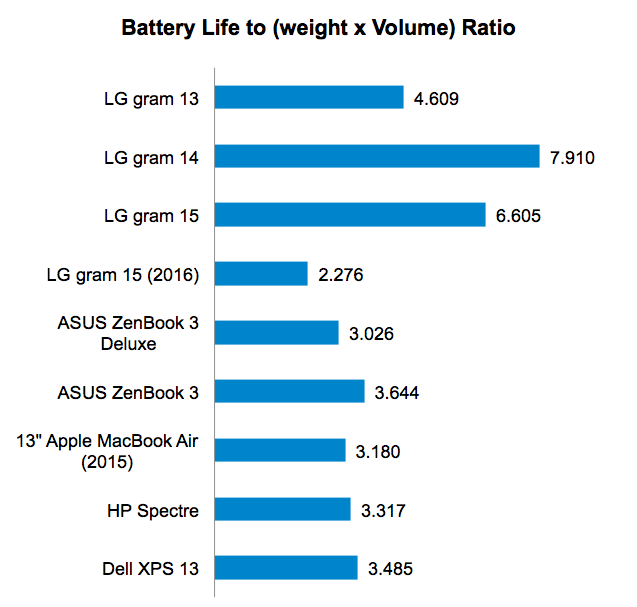