Note: This feature was first published on 29 January 2022. 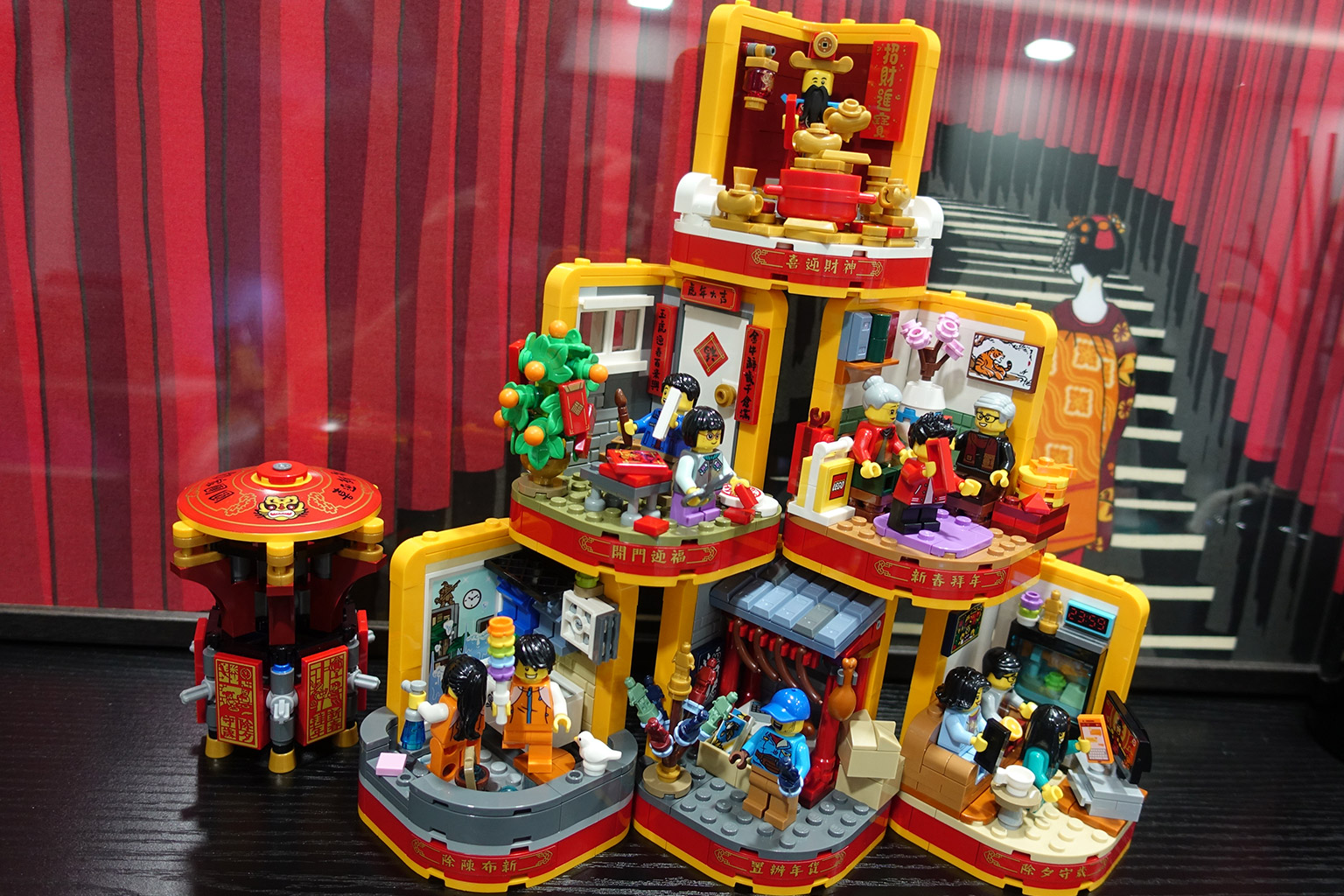 LEGO has been releasing Lunar New Year themed sets since 2019, with last year’s Spring Lantern Festival (80107) being one of my personal favourite – it being a great display and a play set that can be connected to the company’s modular Creator building sets.

For 2022, LEGO has once again released two really nice sets, the Lunar New Year Traditions (80108) and the Lunar New Year Ice Festival (80109). LEGO Singapore has kindly sent both sets over for me to build and while both are absolutely fun to build and stunning to display, it’s the Traditions set that got me gobsmacked with its reverence and accuracy of the Chinese cultural heritage.

Let’s have a look.

Unlike past Lunar New Year sets, the Traditions set is designed for a “Build Together” experience, where you’re encourage to build it alongside families and, or friends. So instead of one chunky instruction manual, you get six separate booklets that allow you to build each of the six modular part of the set concurrently. It’s a great experience, and for the first time, my wife and I didn’t have to take turns to build a LEGO set (yes, she’s a LEGO fangirl too).

It’ll be interesting to see if LEGO will expand this “Build Together” to its other themed sets. 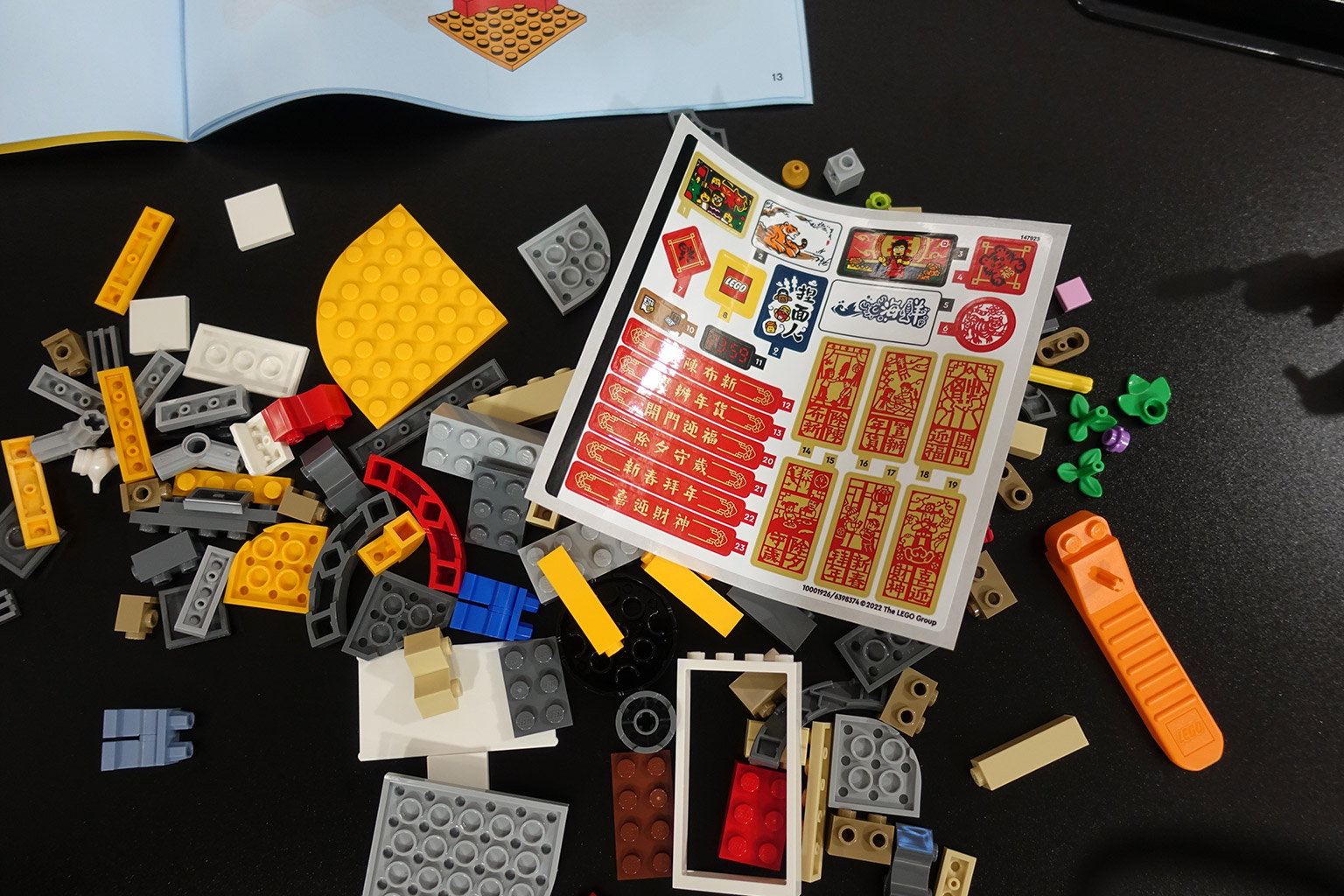 Oh no…stickers! If there’s one thing I dread most, it’s stickers. Not only are some of them dastardly challenging to align to the brick correctly, they also don’t age well over time – corners peeling out, turning flaky, just to name a couple of examples. I do wish LEGO would go with printed elements instead. But these stickers also bring the Traditions set to live, I mean, just look at these details. 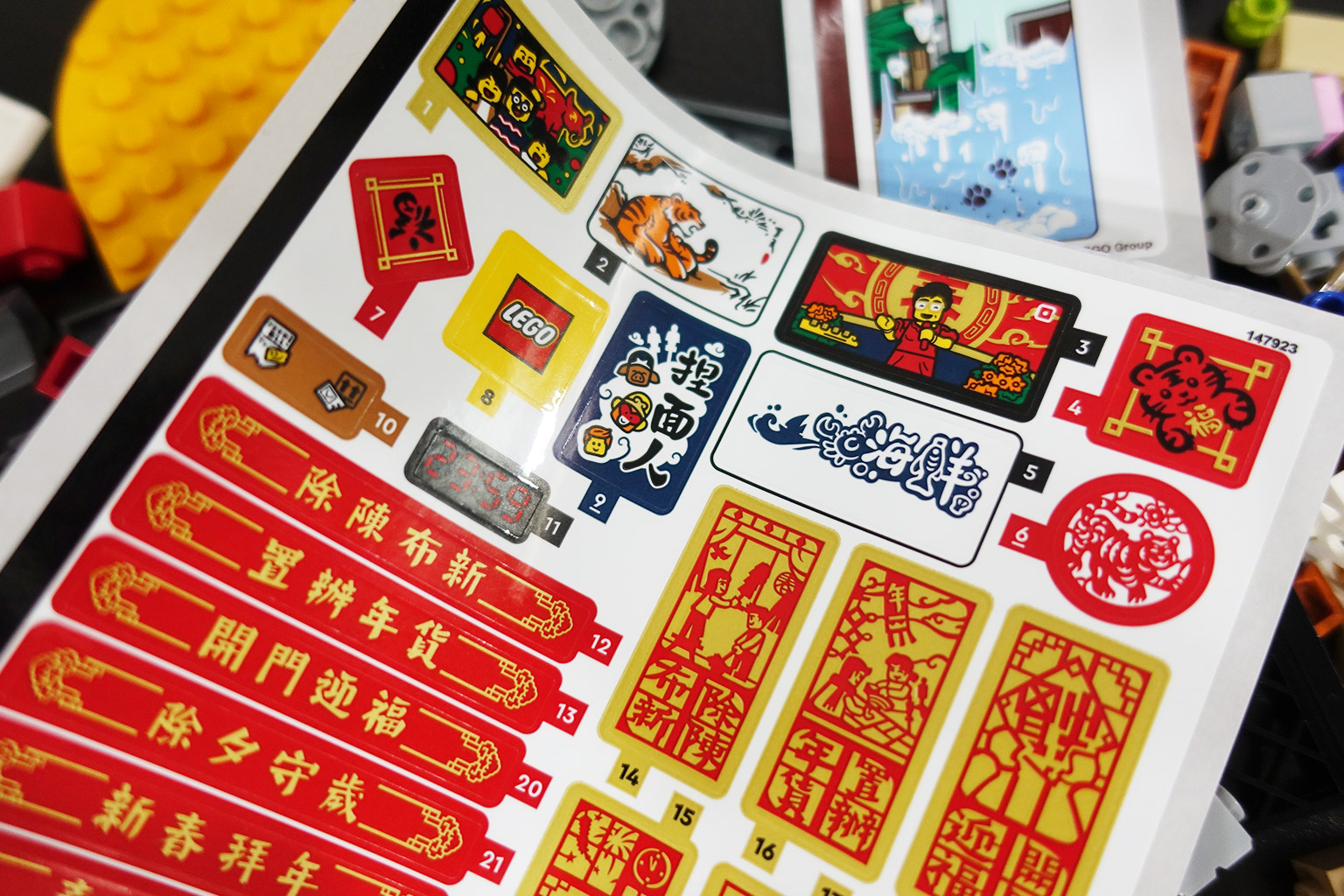 Unlike past sets, that shows the Lunar New Year celebrated in various scenarios (Reunion dinner, Temple fair, etc), Traditions is about what it says, a showcase of popular lunar new year traditions. There are six different modules, with each telling a different story in an adorable diorama-like way.

Each module is attached to a core and is a great nod to a Lunar New Year staple – the Chinese candy box (itself containing six or eight different types of snacks or sweets). The significance of six modules is a reference to the number six (or eight, in some cases) being an auspicious number that signifies luck. The set can also be easily detached to display each module on its own – or even stacked on top of one another to give it more prominence.

In case you’re wondering what traditions each of these six modules signify, let me answer them for you in their correct sequence: 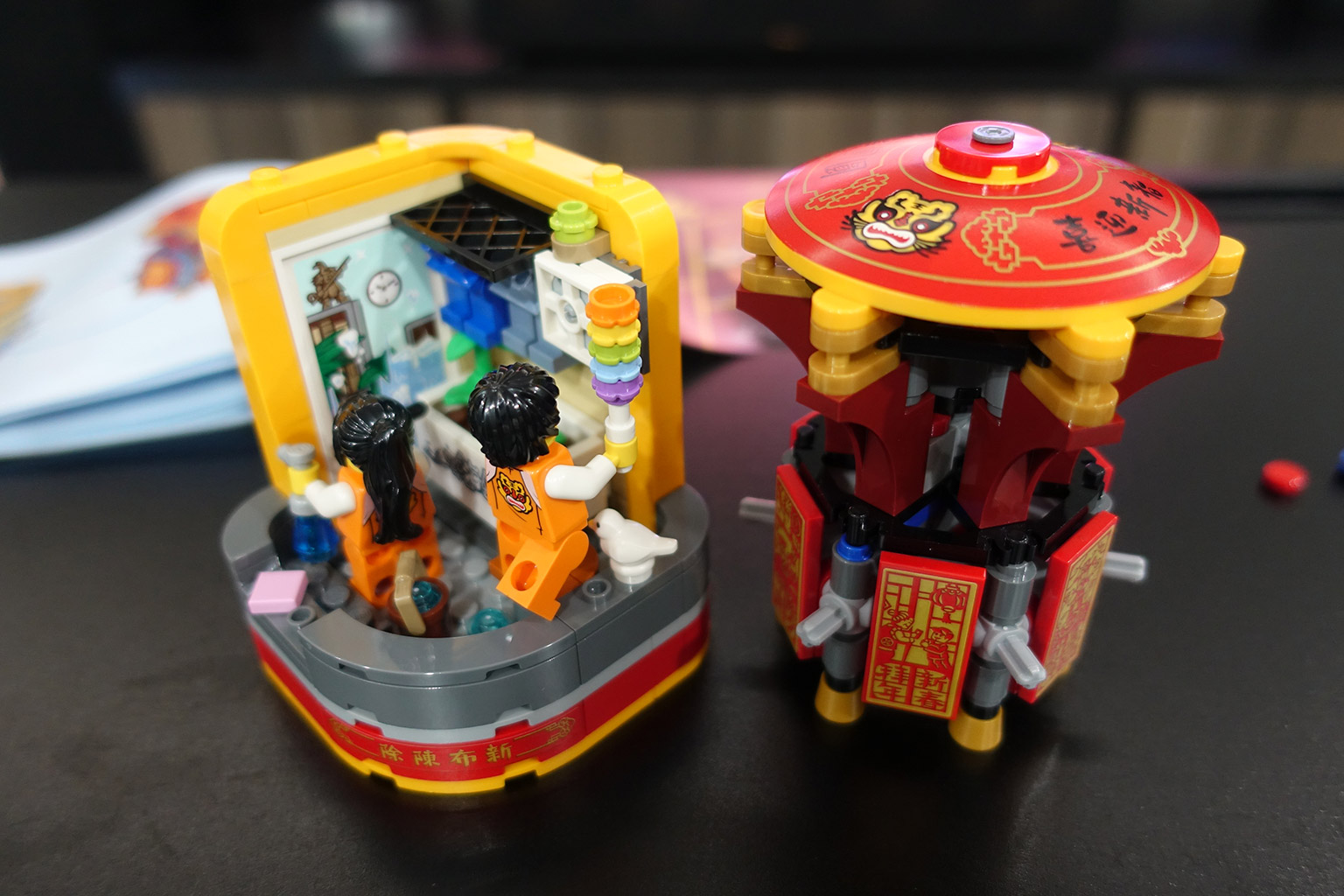 A labourious annual affair, spring cleaning is meant to signify a clean start to a new year – and a “great excuse” for the family to clean up the house for hygienic reasons. This modular features a minifig holding on to a - can you guess it - multi-coloured feather duster. 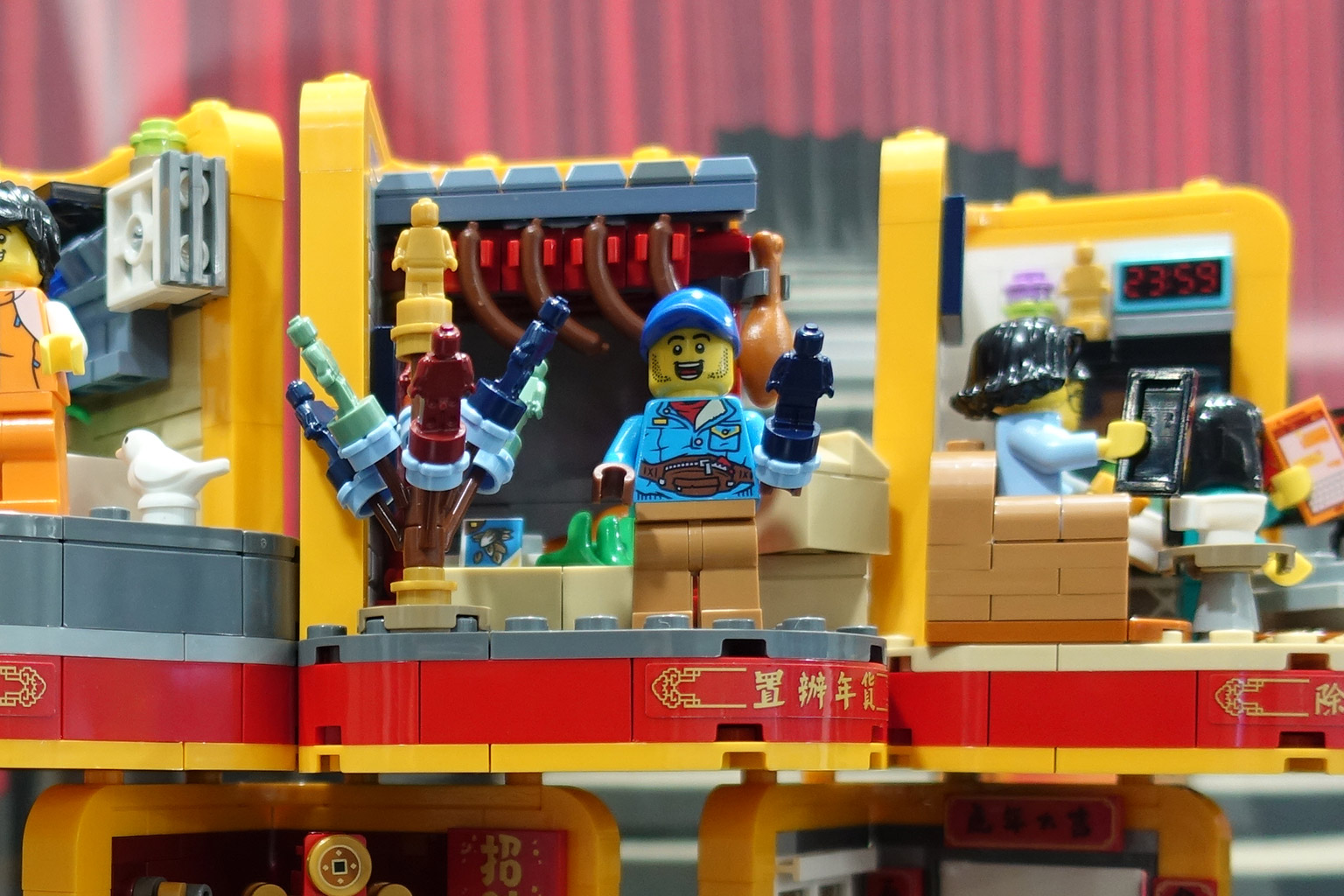 To the Chinese, getting the right food ingredients – especially for Reunion Dinners – for the Lunar New Year period. Besides Chinese sausages (or lup cheong), having a fish dish on the table is important as it signifies nian nian you yu (literally: every year have fish) and is an expression commonly used to wish people an abundance and surplus every year. Prawns too, especially for the Cantonese, as it’s pronounced as “hah” in that dialect and sounds very much like laughter – so having more prawns on the dining table quite literally means having plenty of “laughter” (and happiness) for the new year.

Decorating the house with auspicious decorations 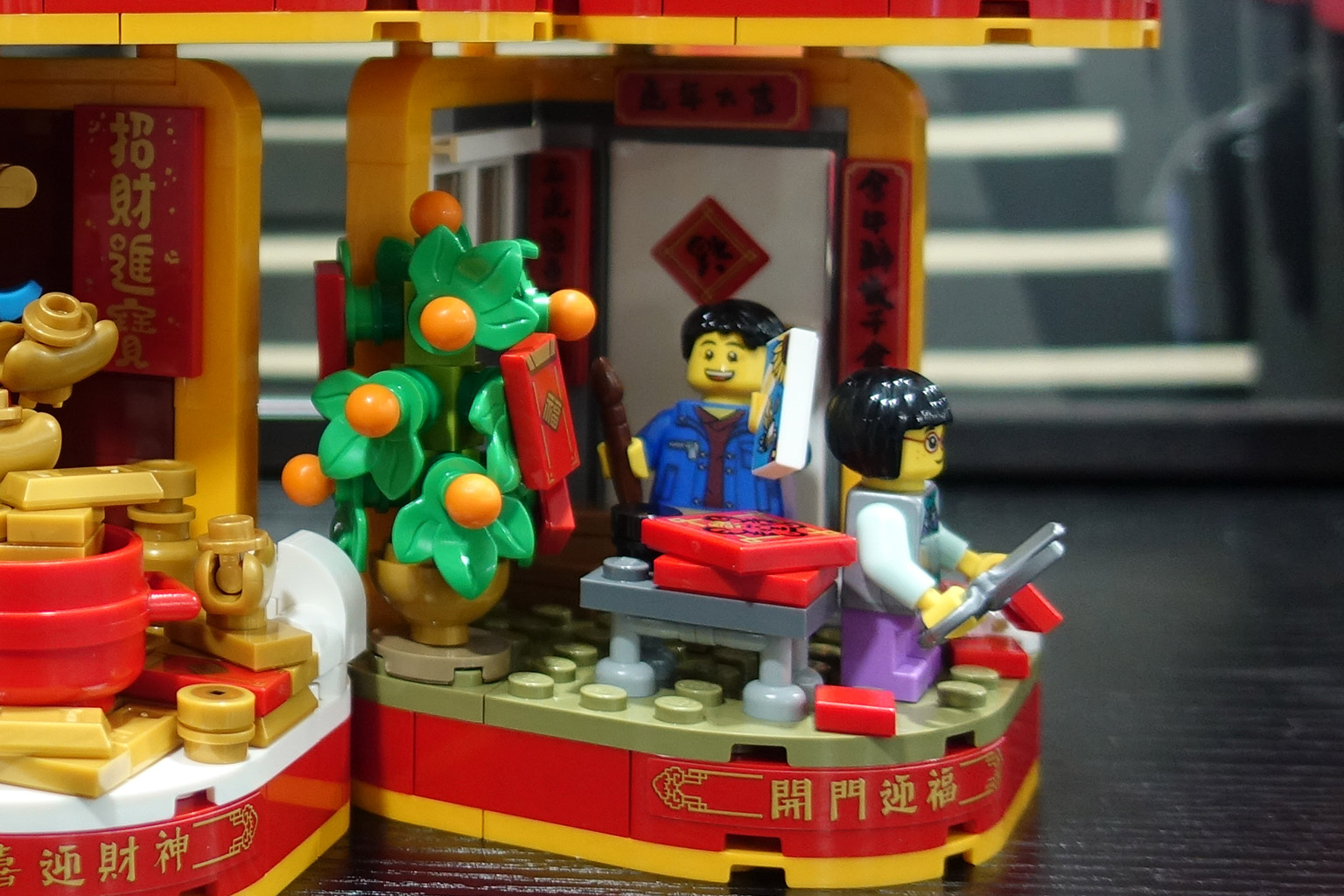 Chinese greetings during the Lunar New Year are all about well-wishes for health and wealth to usher in the new year. I’ve already mentioned nian nian you yu, and the Traditions set also revealed some interesting ones like “good luck in the year of the Tiger”. There’s even a “Fu” or prosperity paper decoration, hung upside down, at the door just like how all Chinese do!

Ushering the new year at midnight 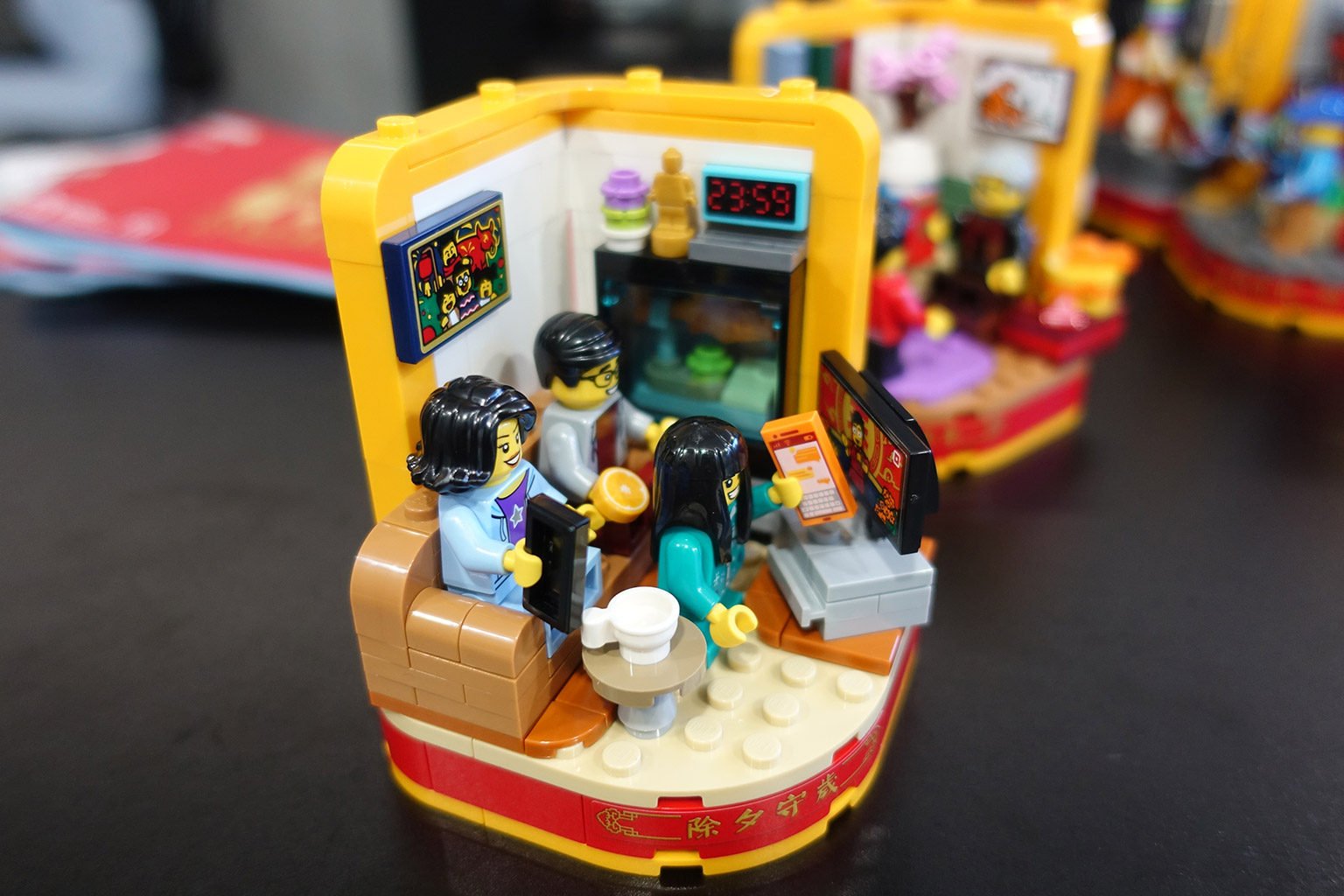 Just like how many of us stayed up or partied away (in the good old pre-pandemic days) until the clock struck midnight on New Year’s Eve, it’s almost customary for many Chinese to do the same on the eve of the first day of the Lunar New Year – mostly spent by watching the countdown on Mediacorp’s Channel 8 or catching up to Stephen Chow’s classic slapstick comedies and the evergreen Fat Choi Spirit starring superstar Andy Lau as a mahjong player in god mode.

Visitations on day one 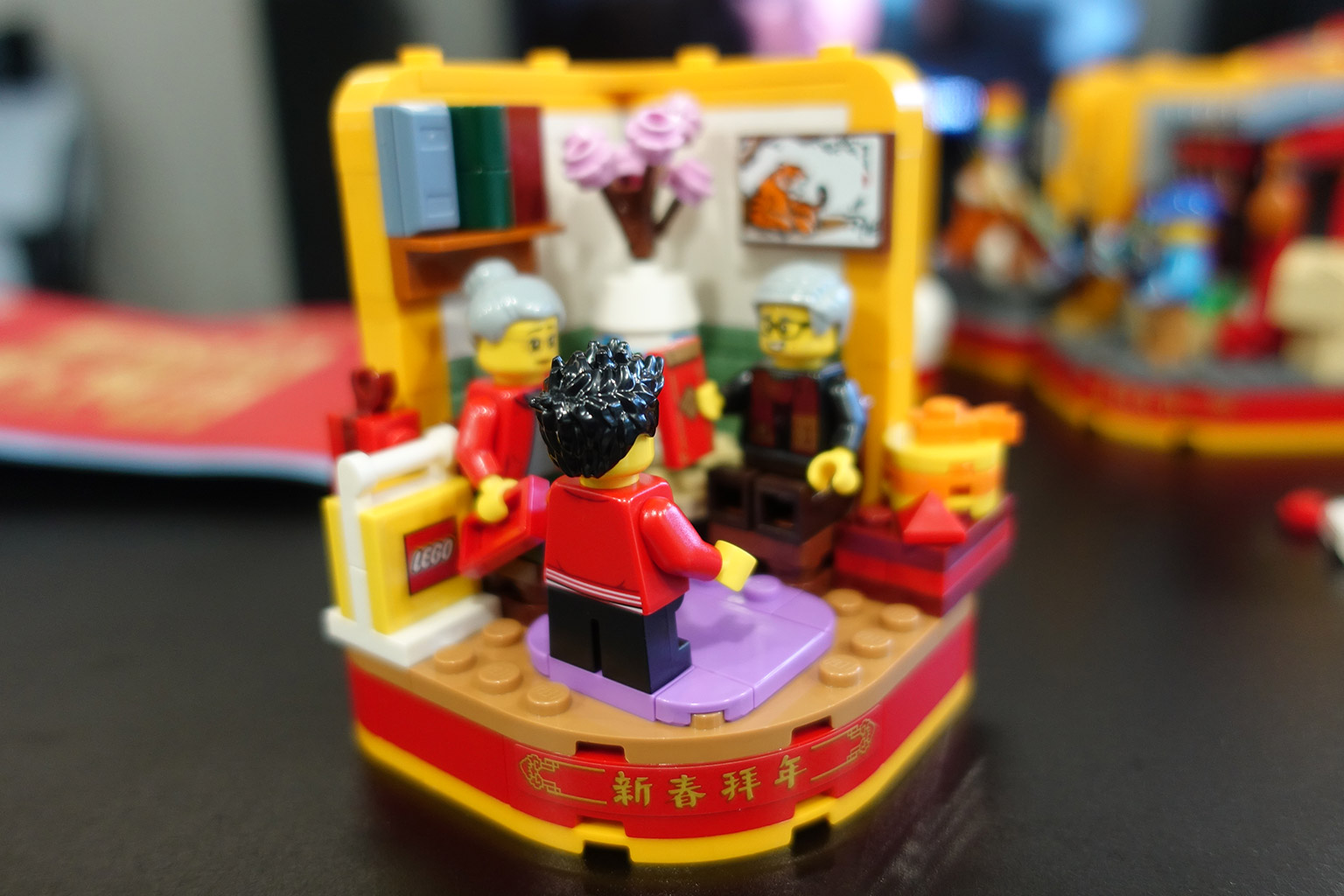 It’s the first day of Lunar New Year, and the young and unmarried ones get to collect red packets from their elders. Also exchanged are the obligatory auspicious greetings between both (see above). It’s also worth noting that, because of the ongoing pandemic, some have resorted to giving out digital red packets.

The God of Prosperity 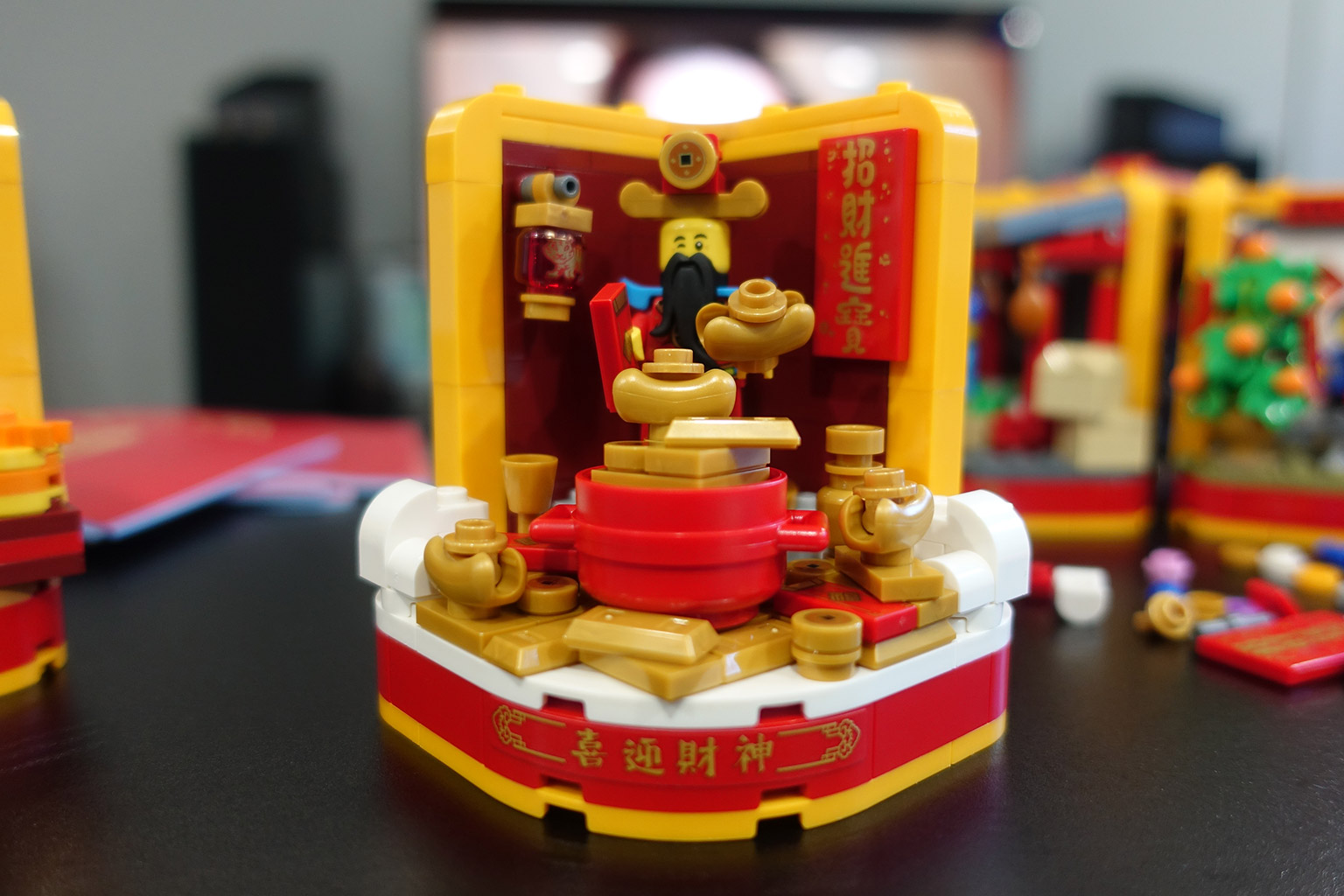 Also known as “Cai Shen Ye”, the God of Prosperity is synonymous with the Lunar New Year celebrations so it’s awesome to see a modular created just for him. As a bonus, part of the building process includes a very auspicious “easter egg”. I won’t spoil that for you.

I’m ethnically Chinese, so a lot of the references, “easter eggs” and surprises are very close to the heart. That said, for most non-Chinese (and maybe for some Chinese as well) a lot of these significance may not be understood or even unnoticed. Perhaps LEGO could have added explanatory notes in the instruction booklets to highlight them. 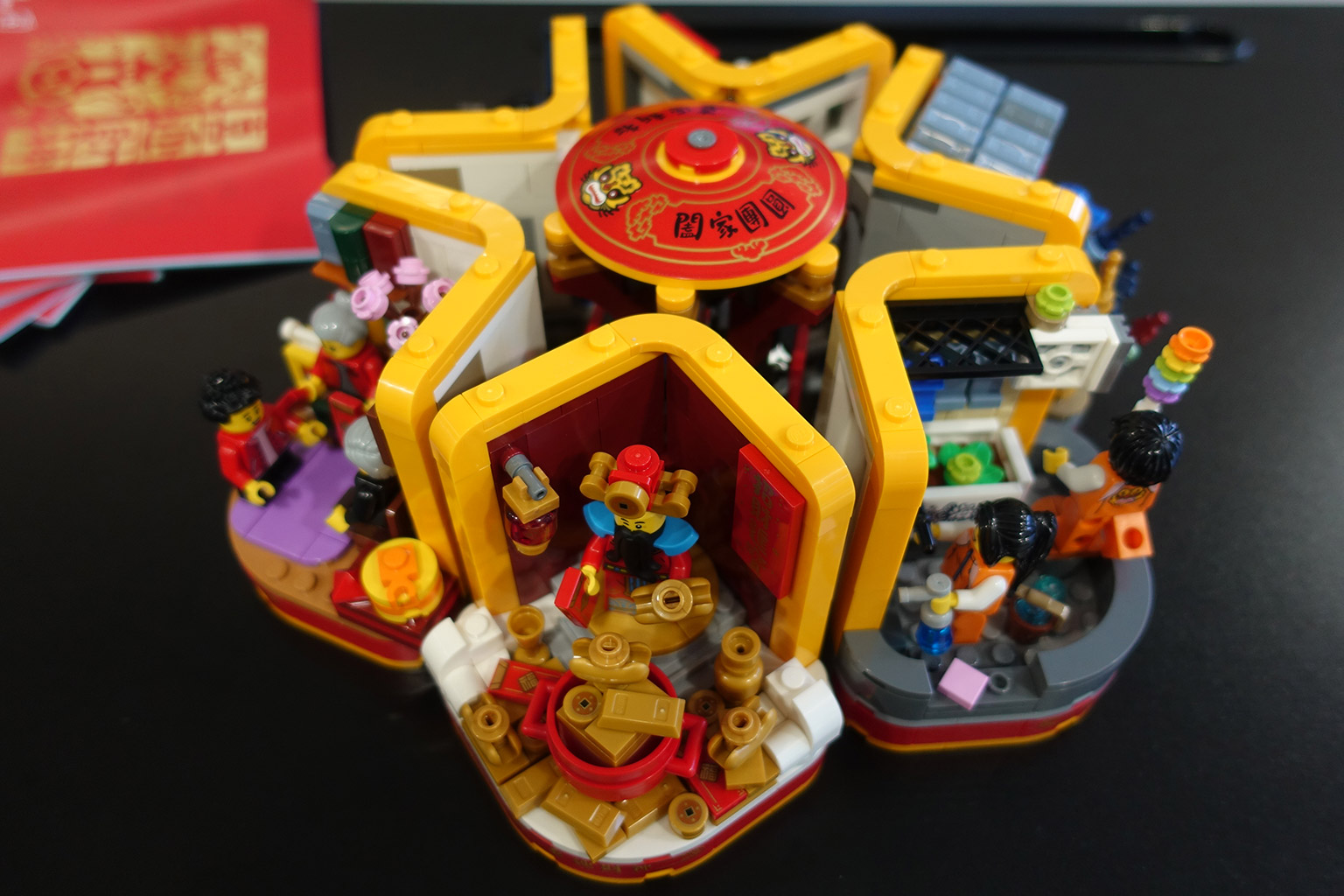 But otherwise, the LEGO Lunar New Year Traditions (note: am I the only who thought that its set number 80108 is also auspicious as heck?) is a really fun set to build and display. While previous Lunar New Year themed sets highlights traditions and how Chinese celebrates the event, Traditions ties up key traditions of the Chinese culture and heritage into six modulars that’s also remarkably educational.