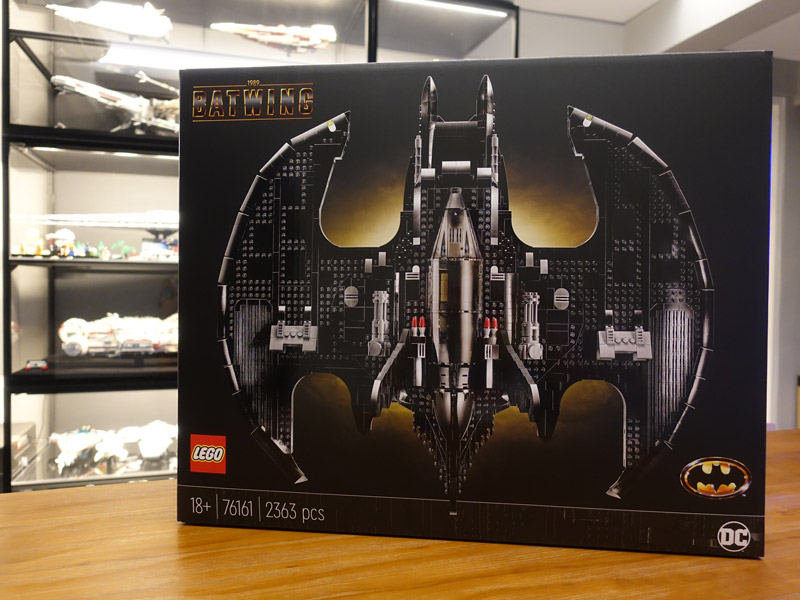 Christopher Nolan's Batman trilogy is a big favourite of mine and is without a doubt one of the best superhero movie adaptions of modern times. But really, it was Tim Burton’s original Batman movie in 1989 that set the bar for superhero movies way even before Christian Bale donned the bat suit. So, it was pretty rad to see the iconic 1989 Batmobile brought to live, albeit in LEGO brick form, with last year’s LEGO 1989 Batmobile (76139).

This year, LEGO is bringing back another iconic vehicle from that movie – the Batwing. It’s B-E-A-U-TIFUL to say the least and after building it, is now one of my favourite LEGO set on display. Let’s have a look at the key highlights of my experience building it.

It's actually larger than what I'd expected 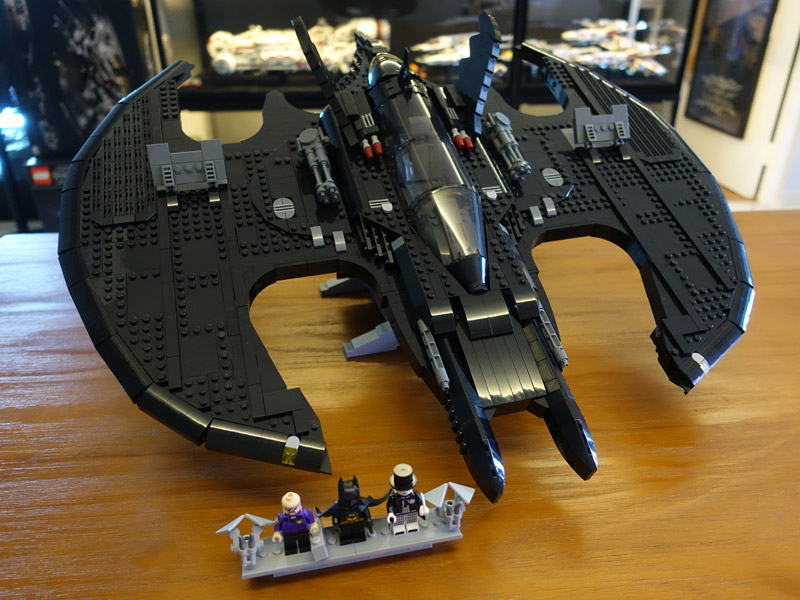 The LEGO 1989 Batwing is a faithfully scaled reproduction of the one seen in the movie and comes with over 2,300 pieces. It's quite clearly targeted at the older LEGO audience, especially those who have seen Michael Keaton put on the bat suit. I completed the set in three days, each day spending between two to three hours. The build itself is pretty straight-forward and has minimal complex or awkward processes that you'll find in some of the bigger LEGO Star Wars UCS sets, although there's a point (about 1/3 into the build process) where you have to flip it over to access its underbelly, and the Batwing can become a tad too heavy for young children to manage without assistance. 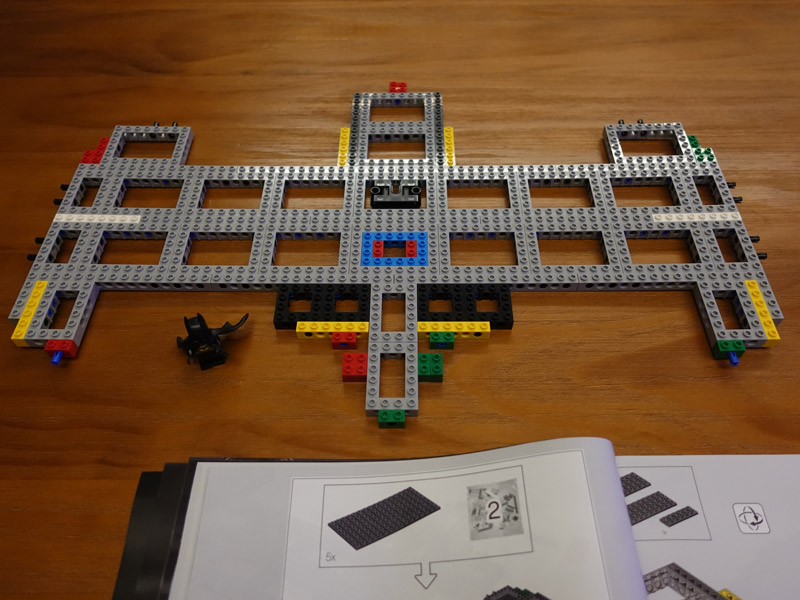 The thing that fascinated me the most with the LEGO 1989 Batwing is how stable the finished model is. For one, the wings are extremely sturdy and do not flex at all. This is in part due to the use of Technic parts to form the chassis before framing it with standard bricks. 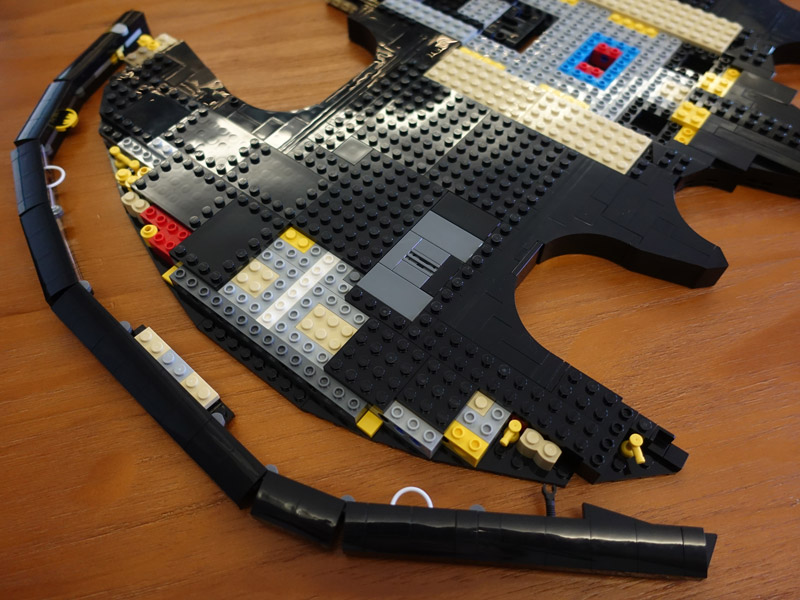 The main bulk of the building process is done on the wings - and boy are they huge and as mentioned earlier, considerably heavy too. It's also here where the process might feel a little repetitive for some, as one side of the Batwing is basically a mirror image of the other. That said, it's also an eye-opener to see some of the nifty tricks used by the LEGO designer to make the bat-like curves of the wings and the rounded edges of the wings. 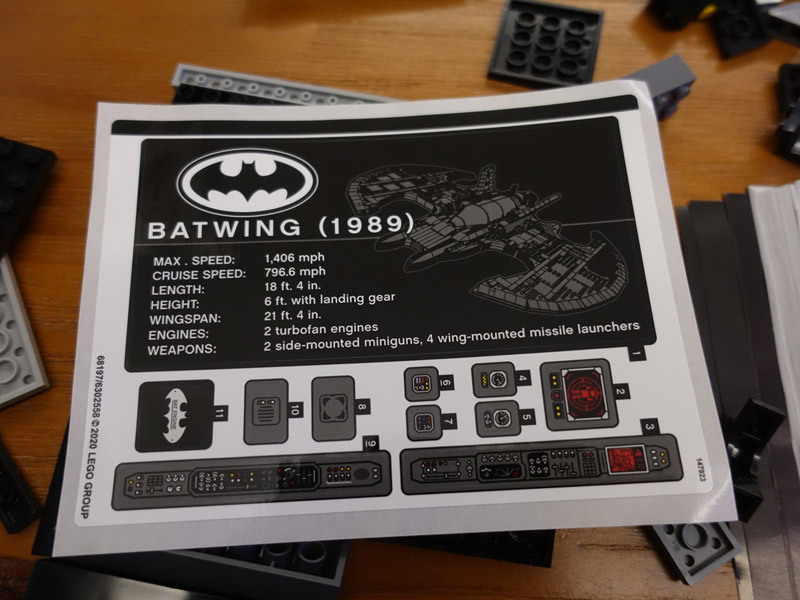 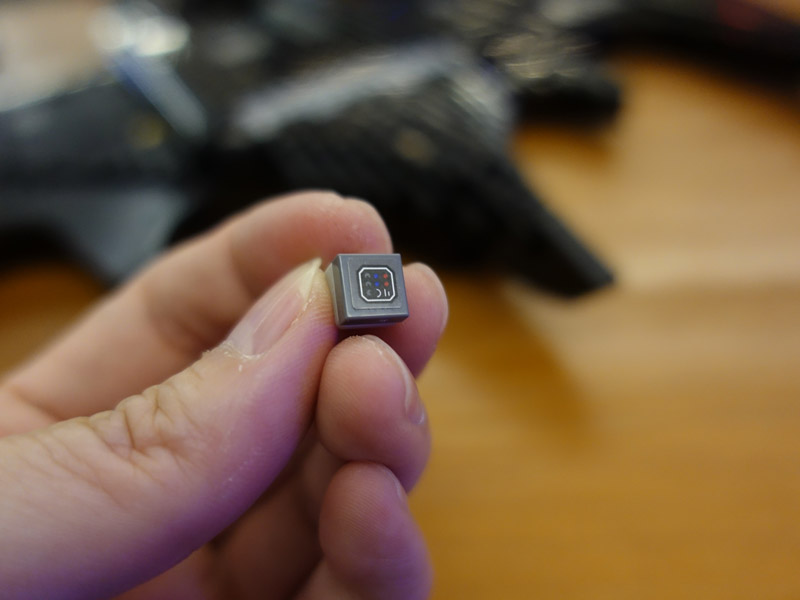 I love my LEGOs. But if there's one thing that I always dread when building them, is having to plaster stickers onto the bricks. LEGO stickers have a tendency to crack and flake off after a while no thanks to our humid weather. Sometimes you might also come across a devilish sticker that's frustrating to put on (such as the itsy bitsy one above). Once upon a time, LEGO makes printed bricks and they were perfect. Then they stopped and went for stickers instead. I can understand its costlier to produce printed bricks, but LEGO has already done so for the LEGO Mario series and I hold on to the hope that perhaps one day, printed bricks will make a permanent comeback.

On the bright side, the 1989 Batwing's stickers are only confined to the cockpit interior as well as the specification label.

There are easter eggs to be discovered 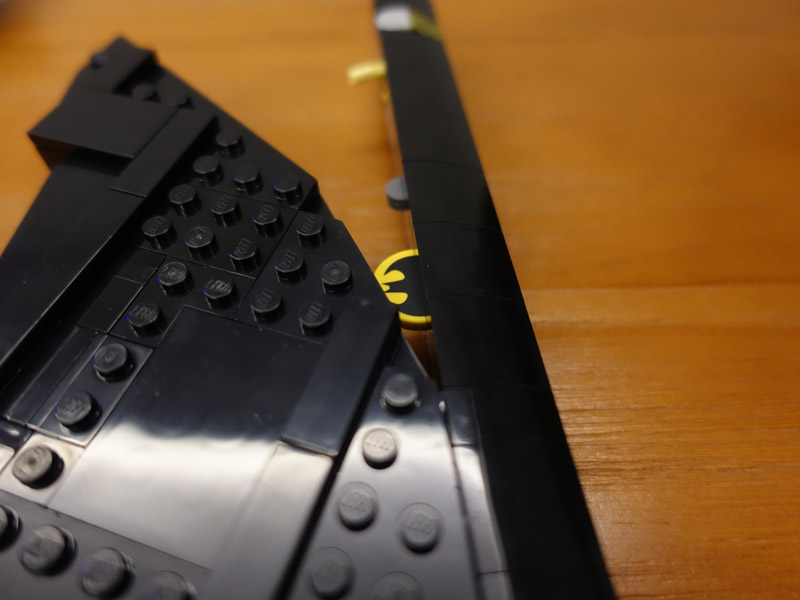 Easter Egg #1: I'm not quite sure why the Bat logo is here since it's concealed on the edges of both sides of the wings. I'm hazarding a guess that it could be a reference to a classic scene in the movie; when the Batwing was silhouetted against the moon whilst flying over Gotham City, mimicking the Bat-signal, before swooping down on The Joker and his goons. 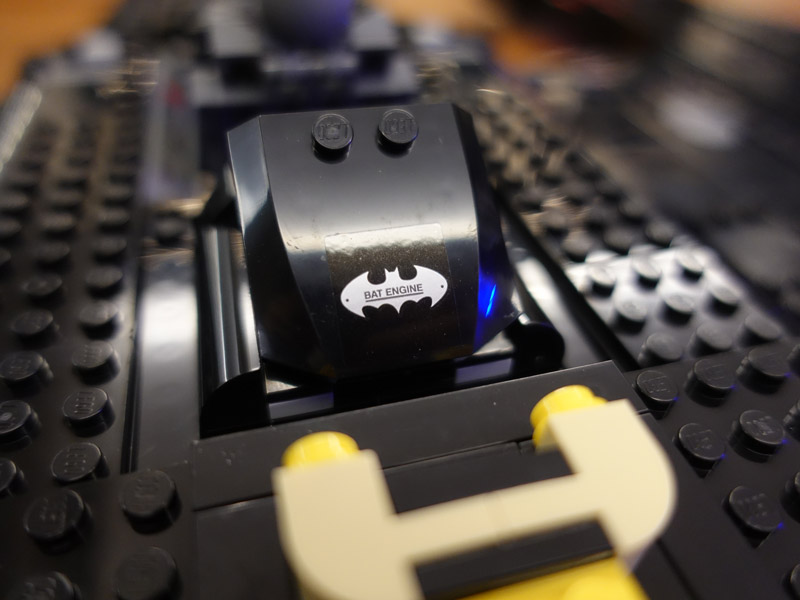 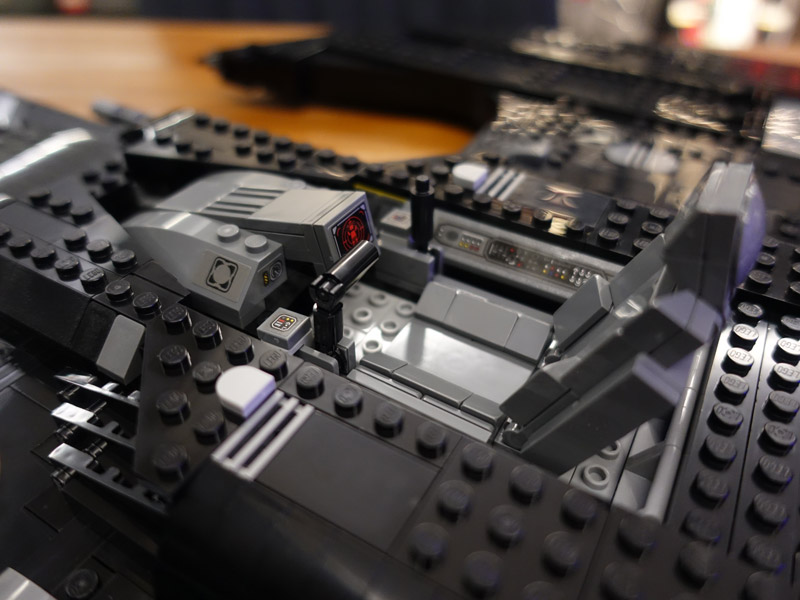 The cockpit has some amazing details and was a joy to build. It also features Easter Egg #3: a screen featuring The Joker’s gas balloon that you will instantly recognise if you had watched the movie.

Be careful 'swooshing' this Batwing 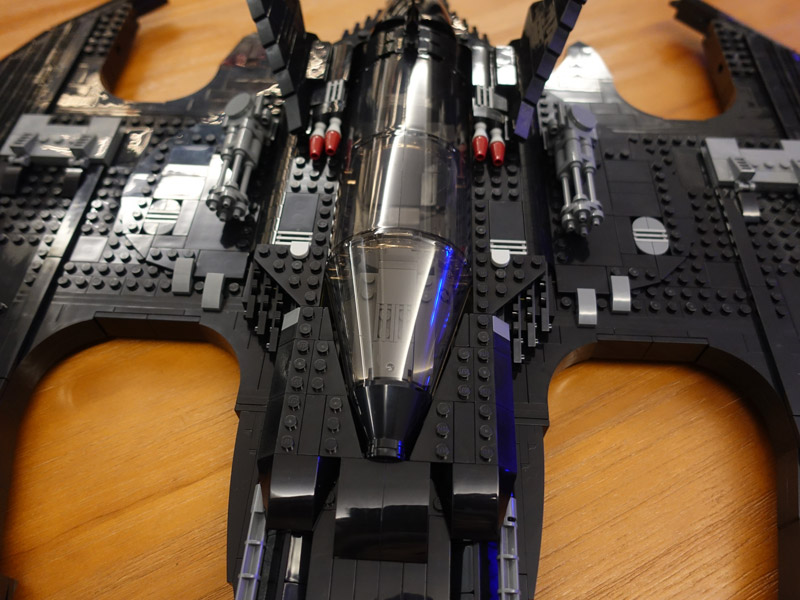 There are LEGO sets with play factors and encourages you to "swoosh" them around. But I can't caution enough against from doing that with the 1989 Batwing. Firstly, it's really built to be a display set. A model that incites "oohs" and "aahs" for when friends visit. It's also quite heavy - not something I would care to 'swoosh' around or let a kid do it. Lastly, as you would have noticed above there aren't many moving parts. The missiles don't detach and the chain-guns do not rotate. In fact, the only movable parts are the two flaps sitting at the top of each wing. A playset this 1989 Batwing is not. 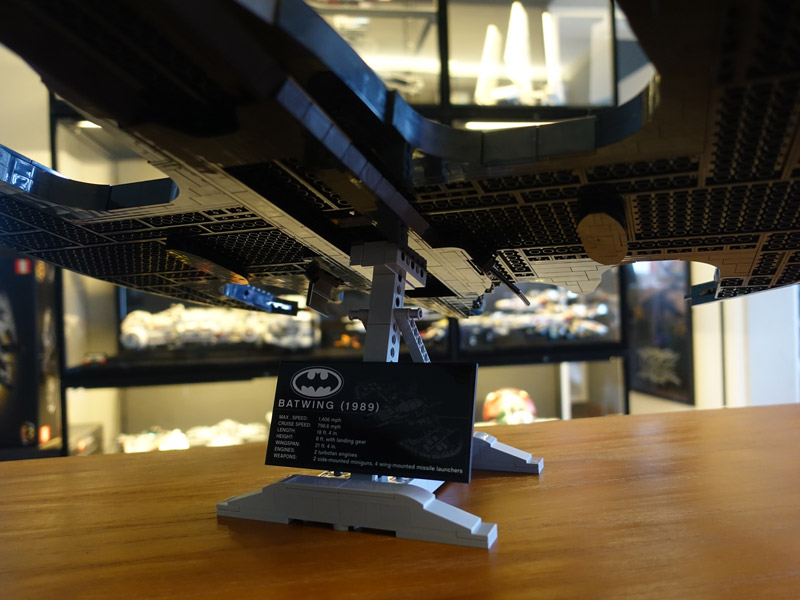 The final build measures 52cm long, 58cm wide and 11cm high when placed on the stand as seen above. The underside features very little details, which to be fair, is faithful to the movie's Batwing. The flattish belly also allows for the Batwing to be mounted on a wall - literally. 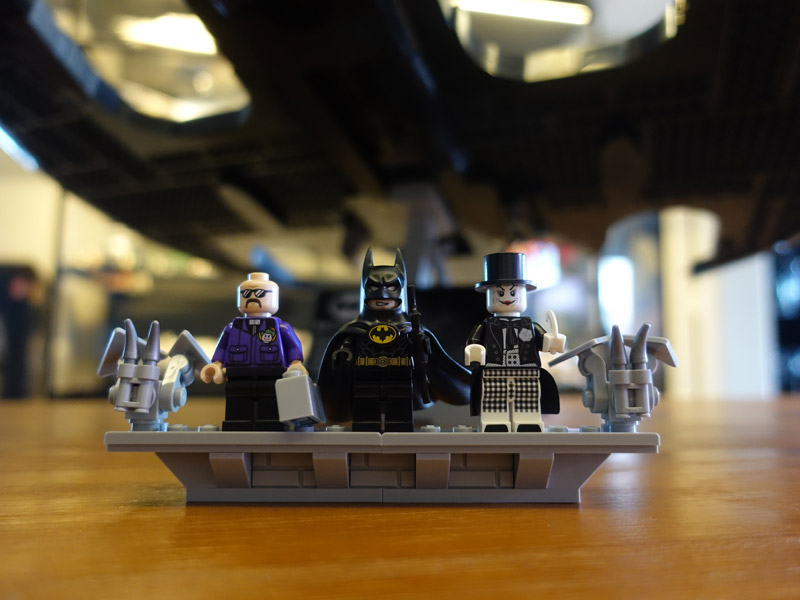 Three minifigures are included in this set (even though the model is larger than minifigure scale) - a Batman with a new moulded cape, Tuxedo Joker and Joker’s goon, Lawrence. 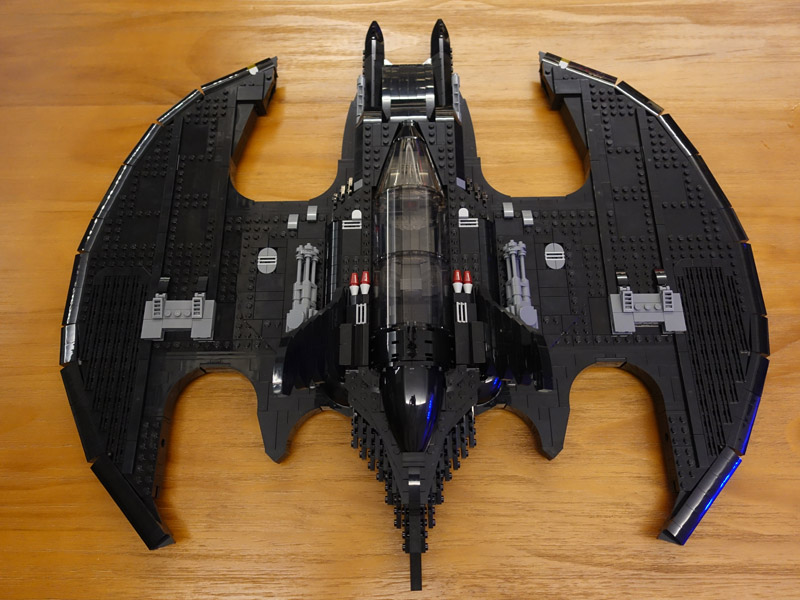 A very unique feature of this LEGO 1989 Batwing is a special brick (built inside the cockpit area) that allows builders to mount and display the model on their wall. Admittedly, I haven't done that here because you do need to drill two nails into the wall to hang the Batwing on. It's a very cool set to hang on the wall, and I have no doubt there will be collectors who display their model this way.

The LEGO 1989 Batwing (76161) is available now at all LEGO-certified stores for S$349.90. It does fall a little on the pricey side, but I think it is an excellent collectable to have displayed on your shelve (or even the wall!) and well worth every penny for diehard Batman fans.