Hey there, and welcome back to another edition of the HardwareZone Games Playlist!

With most of us stuck at home with nothing much to do on weekends for the nowadays, the fact that June features a pretty impressive lineup of game releases is probably just as well. There's no better time to finish up all of our half-completed playthroughs or even grab some new games if you (and more importantly, your pursestrings) are feeling up to it.

Nevertheless, let's not stand on ceremony. Make sure to fasten your seat belts, keep your hands and feet inside the ride at all times, and we'll get right into our eight picks for June 2021.

Let's be honest: we've all imagined ourselves as dapper James Bond-style spies at some point in our lives, and while Hollywood's depiction of the occupation may not be the most...historically accurate, it's definitely the coolest by far. Well, now you can bring those fantasies to life with a friend in Operation: Tango.

In this co-op title developed by Clever Plays, you and your best buddy will have to work together in real-time to complete missions and take down a hi-tech global menace. Solve puzzles, uncover secrets and conduct espionage as an Agent-Hacker duo to get the job done. It's a simple but heavily underused gaming concept, and what makes it even better (especially if you're both bored of your current spread) is the presence of the Friend Pass - you or your friend can both have fun with just a single copy of the game!

As a fellow Warhammer 40K fan, I really don't blame you if this one almost slipped under the radar as it did for me - after all, we're quite used to seeing the W40K insignia slapped right on the top, aren't we?

Nevertheless, at least we got it on the list. Set on the lawless, brutal world of Necromunda, Hired Gun has you playing as a bounty hunter and mercenary in the expansive W40K universe, and it's quite intriguing to see what life might be like outside of the Imperium of Man's control.

Developed by Streum On Studio, the same folks behind Space Hulk: Deathwing, it's safe to say that you'll need much more than a swift trigger finger to navigate this lawless, unforgiving world. All things considered, we're super-hyped to give this FPS a go, and what makes it even better is that there's also Warhammer 40,000: Darktide to look forward to later this year! 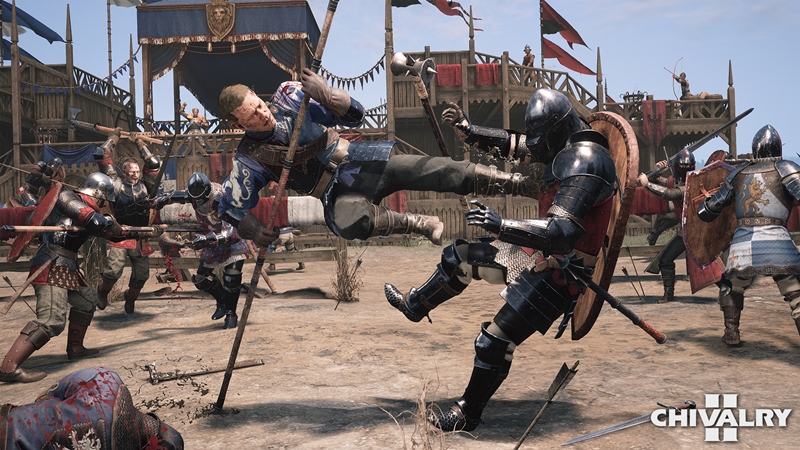 Let's take a small step back from the modern world for a bit and return to a much simpler time, where might usually makes right. In this follow-up to the stellar first-person slasher, Chivalry II is basically all your knightly dreams brought to life on your computer screen. In grisly detail.

Take control of knights from a variety of factions and run headlong into battle lopping off heads. It sounds simple on paper, but the combat is anything but. Much like a Souls title, timing is brutally crucial on this battlefield, and only the most proficient warriors will live the next dawn. In other words, it looks pretty darn awesome, and as much as we'd like to put in the trailer, it's only viewable on YouTube due to age restrictions - here you go!

To be honest, I've already lost count of how many times I've had to type out the words "Final Fantasy 7" over the past year or so. This particular game (and perhaps The Last of Us Part II as well) has certainly been in way more "Top 10" lists and suchlike than it has any business to be, but the fact that it has done so anyway is a testament to how ridiculously awesome it is. So yeah - good job, Square Enix.

Anyway, with things as they are we won't delve too deep into what Intergrade will bring to the table - we probably need only mention that it introduces the spritely ninja Yuffie Kisaragi as well as a story arc for her. You can review all of the specifics in our prior announcement piece, and frankly, the game's excellent reputation speaks for itself - it is our reigning Game of the Year, after all.

Just like how you can tell a Marvel movie by the iconic comic-flipping sequence, Ratchet and Clank need no introduction. With the ever-awesome Insomniac Games taking the reins once again, the heroic duo's latest adventure, Rift Apart takes players on a ride of dimension-hopping proportions, and if the trailers are anything to go by, saying that the game looks awesome doesn't quite do it justice.

Between the snazzy new levels, characters, and portal-jumping mechanics, among various other inclusions, Rift Apart is probably one of, if not our most hyped games for the month. Admittedly, action-adventure games might already be hogging more of the spotlight than they should be right now, but it's hard to say no when all of them look as amazing as this one.

JRPG fans, this is your stop, and doubly so if you can't get enough of games like Genshin Impact or NieR: Replicant. Admittedly, Scarlet Nexus doesn't feature the former's "gacha" and bullet-hell gameplay aspects respectively, for better or worse, but this newest title from Bandai Namco Studios does retain the tactical combo-chaining satisfaction that makes these games so engaging.

From massive flame blasts to chain lightning and even midair telekinetic powers, players will take control of one of two protagonists gifted with "Psychokinesis" abilities. As part of the Other Suppression Force, they'll be defending New Himuka City from the alien beings known as "Others", who are continuously emerging from the mysterious Extinction Belt. Additionally, if all of these sounds like something you'd like to see as an anime, it's actually getting one too - it's currently being produced by Sunrise and is set to premiere on 1 July later this year.

Don't worry, arcade lovers - we haven't left you in the lurch. Sporting a rather retro-like aesthetic with all the timeless appeal of twin-stick spaceship combat, Only By Midnight Limited's latest title pits players against intergalactic spider invaders. However, what sets this one apart from the mass of other spaceship shooters is the "involvement" of terrain within the gameplay formula.

In Curved Space, your ships (and bullets) will adhere to and follow the contours of the terrain you're currently on, which means you'll need more than just your trigger finger to get through the various levels. Accordingly, you'll probably need a fair amount of tactical acumen too, as the ability to "hug" the terrain does provide for lots of interesting angles and approaches. In short, the game is a lot more subtle than it appears to be, but hey, we're certainly not complaining!

Coming to you from Heart Machine, the team behind 2016's award-winning Hyper Light Drifter, Solar Ash is basically what you'd get if The Pathless had a younger, sci-fi-inspired sister. Combining vibrant pastel-like splashes of colour with a simple, movement-based combat system, you could say that this game is as much about its unspoken style points as it is about actually taking down the various bosses.

After all, there's nothing more satisfying than beating down mobs with perfectly fluid movements and rhythms, right? Honestly, the only potential bummer about this exhilaratingly feel-good title is the fact that we don't actually have a concrete release date. Good grief.