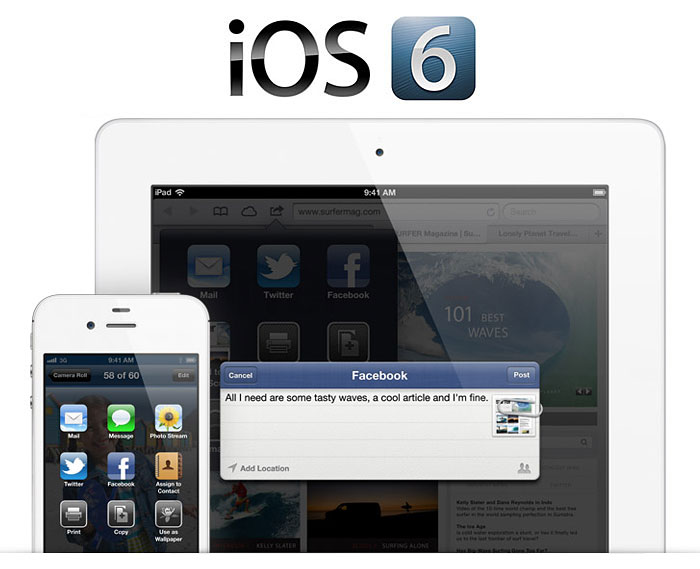 WWDC 2012 finally came to a close end of last week. For the uninitiated, Apple kicked off its yearly developer conference with a slew of hardware and software announcements: a refreshed MacBook lineup (for both the MacBook Air and MacBook Pro) powered by Intel's Ivy Bridge, including the introduction of an optical drive-less, full flash memory-driven, 15-inch MacBook Pro with Retina Display (read: 2,880 x 1,800 pixels!); the company's next mobile operating system, iOS 6; and its next desktop OS, OS X Mountain Lion.

While these three topics garnered the most press coverage, there were a few things that went under the radar that day (mainly because they weren't mentioned during the keynote), such as the new AirPort Express, iPad Smart Case, and the Mac Pro's speed bump. So for those of you interested to catch up on all things related to WWDC 2012, do check out our WWDC 2012 roundup article.

Like iOS 5, Apple's next major mobile OS will supposedly come with more than 200 new features, though as we all now know, not all features will be fully compatible with all supported devices.

While we've previously covered the major features in our iOS 6 Highlights article, the interest from our readers remains high. Is iOS 6 truly revolutionary or is Apple still playing catch-up to Google Android? In this article, we take a closer look at the new Facebook integration, the various enhancements in Photo Stream, Mail, and Safari, as well as the new Privacy controls. As we mucked around the OS, we also uncovered a few surprises. So, read on.

It was supposed to happen in iOS 4. But it didn't. We hoped that it'd happen in iOS 5. But Apple went with Twitter instead. But at long last, it's finally going to happen in iOS 6. Yes, we're referring to Facebook integration in iOS. And judging from the level of integration in Apple's soon-to-be-released mobile OS, it looks like whatever animosities both companies have of each other are now under the bridge. In fact, Facebook is so woven into iOS 6 that it makes Twitter's integration look superficial.

Like Twitter, there's now a Facebook setting in the Settings app. If you haven't already installed the Facebook app, you can do so right here. Else, enter your Facebook credentials and hit 'Sign In'. Of course, the greatest benefit of having a system-wide sign-in for Facebook is so that you can say goodbye to multiple (and annoying) Facebook re-logins on different apps. Before truly signing into Facebook, you'll be presented with another page that tells you what this means for your contacts, calendars, photos, and apps.

Next, you can tap on 'Update Contacts' to update your contacts with your Facebook friends' user names and photos. Facebook events as well as your Facebook friends' birthdays will show up in the Calendar app. Of course, you can turn off calendar and contacts syncing anytime you want. If you've the Facebook app installed, tapping 'Settings' at the sign-in page will bring you to the settings for your chat and message alerts, HD video recording, and push notifications.

Besides sharing from core native apps like photos from Camera or Photos, websites from Safari, and locations from Maps, you can now talk about your favorite app from the App Store, movies and TV shows from the iTunes Store, and even 'talk smack' on Game Center. Game Center now allows you to add friends via your Facebook account. Posting to Facebook (and Twitter) can also be done quickly from the Notification Center - there's now a 'Tap to Post' ('Tap to Tweet' for Twitter) button. You enter your location, as well as select the audience.

But wait, that's not all. You can also ask Siri to post for you, and there's going to be a public API so that third-party apps can (hopefully) have the same level of access to do the same types of sharing as Apple's own apps. For Mac users, Facebook integration is also coming to OS X Mountain Lion.

During the keynote, iOS chief Scott Forstall said that since the Twitter integration in iOS 5, Twitter has seen a threefold growth in iOS users. 10 billion tweets were sent from iOS 5, and almost half of them were with photos. With such deep Facebook integration in iOS 6, it looks like it'd be a bumper year for the world's largest social networking service. As Android users continue to scratch their heads about all this fuss on Facebook sharing, long-time Apple iOS device users will be all too happy to know that they no longer need to jump through hoops in order to share on Facebook.

Shared Photo Streams: Sharing Photos with the People You Choose

In iOS 5, Apple introduced Photo Stream, a feature which automatically uploads your photos to iCloud, and pushes them down to the rest of your Wi-Fi or Ethernet-connected devices. On an iOS device where storage is limited, there will be a Photo Stream album that holds your last 1000 photos. And iCloud stores new photos for 30 days. In general, Photo Stream works great, albeit limited, in the sense that you can't share the streams with others - until now.

In iOS 6, Photo Stream now allows you to share multiple sets of photos with selected people. They can comment on the photos, and even 'like' them. So, how do you access this service? In Camera Roll, select the photos, and tap on the 'Share' button. Then, tap the 'Photo Stream' icon in the Share Sheet that appears. You will then be prompted to either create a new Photo Stream or add on to an existing one, along with the ability to define recipients at the top.

Friends using iOS 6 devices will get a push notification, and they will see the photos in the Photos app, while Mountain Lion users will see the photos in iPhoto. Of course, both must also be using iCloud for this to work. Shared photo streams can also be viewed on a TV via the Apple TV box. For non-Apple-device-using friends, they can view the photos on the web.