Interview: Zack Snyder and Dave Bautista talk about Army of the Dead's zombies Army of the Dead will undoubtedly satisfy zombie fans, gore-wise. That said, were there any scenes apart from the full frontal one you’ve mentioned, that you had to remove because it was just too much?

Zack Snyder: We did some cuts involving brains, where when we got the visual effects back, it was just pure gory insanity and we kind of trimmed it a little bit. You know, just to keep you from turning the TV off. Other than that, what you see is pretty much what you get.

How in the world did Sean Spicer get involved in this?

Zack Snyder: Look, I needed pundits. I think, actually, Donna Brazile suggested Sean. When I got Donna Brazile to do the one part, and we were talking, she went, “Oh, you should get Sean to do the other part.” Because all these pundits know each other. You don't realize that that's a whole culture. Most people that are on the talk shows arguing with each other? Apparently, when the cameras stop, they're like, “Hey, that was crazy! We should go get a coffee.” So, yeah, she said, “What about Shawn?” and I was like, “I don't know.” We contacted him, and he was like, “Yeah! I’ll do the part.”

I think this might be your most pop film in a long time. Was there a need to cut loose, after the darkness of your last few years? What did the film mean to you?

Zack Snyder: I was really just trying to reconnect with the joy of making movies. And even just in the process of making it - being the DP, and the director, and the camera operator - really was just complete cinematic immersion for me. Not to mention the genre deep dive, sort of cinematic immersion as well. I mean, all of it, whether it be this or the tropes - every bit of it is a love letter to movies in general. That was the ‘why’ of it for me. 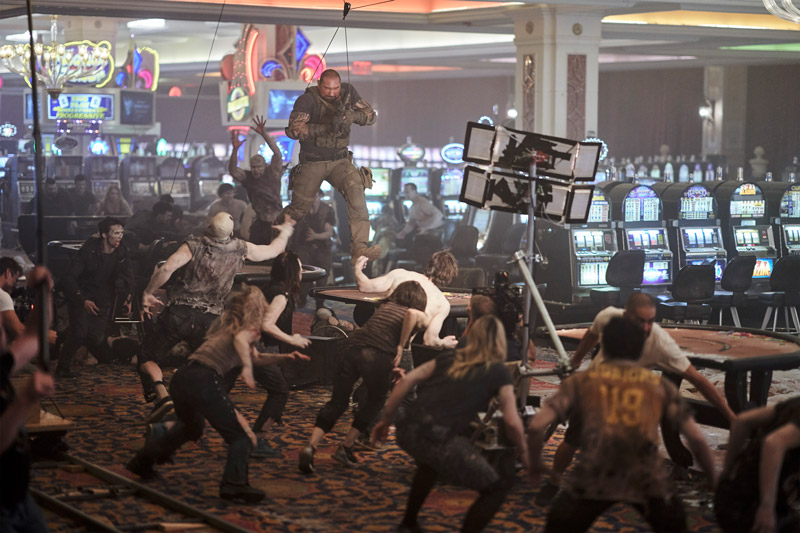 Two actually abandoned casinos were used to film the movie (Showboat Hotel Atlantic City and Atlantic Club Casino Hotel) - what was filming there like, and how did you prepare them for all the mayhem that goes down in the movie?

Zack Snyder: It's funny, you should ask that, because we couldn't get into actual casinos. What we did was, we went to Atlantic City, and we got in these abandoned casinos that had lost their gaming licenses. We brought in all of our own slot machines, and just recreated a casino from scratch, other than having the building. That's how we did the casino floors. They were just all done in the casinos that we constructed in Atlantic City. But it was fun shooting in Atlantic City, because it's like a miniature Vegas anyway. You have all these big giant casinos, and you're inside of the world, pretty much. That was really fun. The only difference is that we had zombies running through ours and we were shooting it up, and there were sparks. We were destroying the tables and cards were flying everywhere. It was pretty fun once you got into it.

Can you talk us through the opening sequence? It acts as a preview of Las Vegas before and during the zombie outbreak. We see a whole bunch of characters fighting to survive the outbreak, but then things take a darker turn...

Zack Snyder: Well, these are just people who happened to pick up guns during a zombie apocalypse, and start shooting, and suddenly had to be good at killing zombies, like this character we refer to as the Soccer Mom. The whole idea was that you should know if you grow to like a character and are interested in following their story - yeah, don't do that. That's a mistake. You made a big mistake. Stop getting attached to things, because you don't know what's going to happen.

The whole design of the title sequence is that it's meant to feel at first, even musically, like it's a lark. It's fun. You don't have to care that much. Oh, look, this cool soccer mom is going to kick ass. It's just going to be hilarious. And then slowly, by the end of it, you realize that even musically, where you end up is a metaphor for what the movie is going to be. It might feel like fun. We're just going in to kill zombies, but before you know it, you're going to get kicked in the nuts.

Bautista is a really interesting choice for Scott Ward - I’ve heard you refer to him as an ‘anti-action action hero’. Why’d you go with him for the lead role?

Zack Snyder: I went for Dave because I really think he has this incredible vulnerability. He's huge. Clearly, you get that he could be formidable if push came to shove. In the end though, he's just a broken dude who really just wants to fix this relationship with his daughter. He made a mistake, and he just wants redemption. The thing I saw in Dave was this sadness and vulnerability that I knew he could pull off, and he did, without sacrificing his believability as the leader of this gang of zombie killers. This movie will come out 17 years after Dawn of the Dead, which has earned quite the following among horror fans. You tinkered with traditional zombie movie tropes there, and you’re doing it again with Army of the Dead. What were you trying to achieve with those changes?

Zack Snyder: In making Dawn of the Dead, the only thing we really changed was that the zombies can move quickly. Otherwise, the rules are pretty much the same. You get bit, it might take a while to turn depending on how bad the bite is, but eventually you're going to become a zombie. The only way to kill a zombie is to shoot it in the head. Those rules, we kept. They’re zombie canon, so you keep them. And then as we went into Army of the Dead, I was checking things off again - shoot them in the head, for sure. If you get bit, you turn. And then we had slight subtleties in ours. Like, if Zeus bites you, you turn into an Alpha. If an Alpha bites you, you turn into a Shambler. If a shambler bites you, you turn into a Shambler.

I saw the Alphas as having the same social habits as say, a wolf pack, or a pack of lions. They might be social with each other, but you're still not able to reason with them or talk to them, or get sympathy from them. They're going to rip you in half if they catch you. One of my main reasons for doing this was that I was hoping that you would be sympathetic towards the zombies. I thought the best monster movies are the ones where you care about, or at least find yourself showing compassion for the monster. That’s really difficult with the normal zombie movie, because they're not meant to represent individual points of view, whereas Zeus does allow that. So you could find yourself going, Goddamn those humans! They need to leave the zombies alone.” And I thought that would be a fun trick, if I could pull it off.