The one and only Rob McElhenney and Charlotte Nicdao 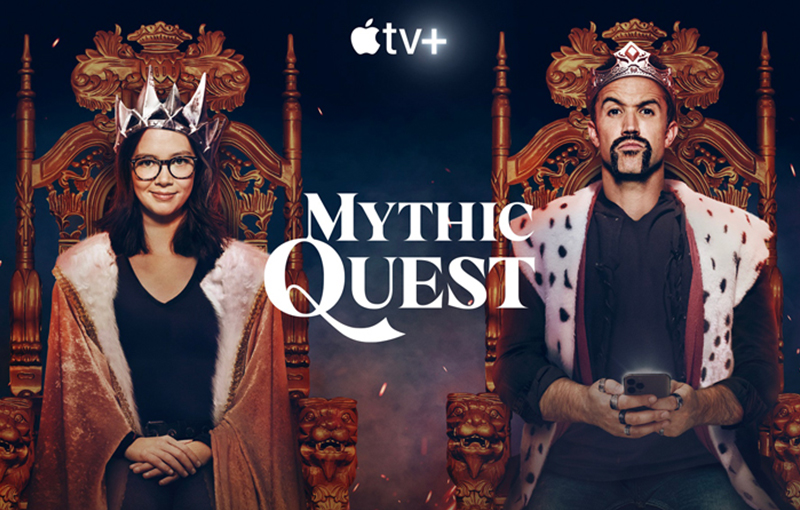 Season 2 of Mythic Quest: Raven's Banquet is nearing the end on Apple TV+, and the thoughtful comedy about a fictional game studio (it is produced by Ubisoft, too) where its characters faced day-to-day professional and personal issues have both warmed and tickled the hearts of many gamers.

At a recent virtual press event, we spoke with the show’s co-creator, executive producer and lead actor Rob McElhenney and co-lead Charlotte Nicdao, who shared with us their thoughts on the comedy genre, the notion of masculinity and that wonderful flashback episode of Season 2.

Hi Rob, both seasons of Mythic Quest have very heart-tugging flashback episodes that felt separate yet binds the show together. Tell us more about “Backstory!” and the focus on F. Murray Abraham’s C.W. Longbottom in Season 2.

Rob: We just felt like, if we wanted to do another flashback episode that maybe we could take characters that were in the core group of the team. And so the one that the character that had the most amount of past to draw from, and probably the most complicated past would be CW. So, when we got into the writers’ room and we started breaking out what that episode could be, the more and more we realised that that his whole present day is influenced by this one event in his life. We thought wow that could be really interesting to subvert the expectation of, of where the audience might think we would go and base a whole episode about that.

How do you keep a show funny, feel-good, and yet authentic in the working world of video games?

Rob: I mean, I think we just wanted to present an office comedy, a workplace comedy that felt as authentic as we possibly could and would allow us to be entertaining, which is really important, but also really funny that it presents people as multi-dimensional. I would say the characters of Ian and Poppy are not necessarily feel good insofar as they are narcissists ego driven and very difficult people. However, I think we can see a lot of ourselves in those characters if not the basis of our own characteristics. We can also see a lot of room for growth and compassion and empathy, and that's what we really wanted to explore more for this season.

With the first season, you mentioned before that you feared not getting the “gaming” environment and the authenticity right. But you and the rest of the crew most certainly did. How did you feel about that coming into Season 2?

Rob: Once we realised that we had achieved our goal of making it feel authentic to the experience of what it would actually feel like working in a development studio, that really freed us to now explore what it is to just be a human in a workplace so that it would broaden the appeal and of course, we're not going away from the authenticity of the gaming world. But we felt like we can. We've checked that box and we've done it to the best of our abilities, and it was received well, that we felt like now we can start exploring different things. And that's why, in season 2, I think in a lot of ways feels very different than season one, because we're really starting to evolve the characters and realise that that the fact that they work at a gaming industry is interesting but that part of it now is certainly in the background.

Charlotte: And I'll say it was very cool after season one to get all this feedback on social media from people who work in the gaming industry be like, oh my gosh this is so similar to my workplace where I really relate to Poppy or I really relate to, you know, Rachel or Dana. Like, this is exactly what my workday is like. But then also very cool to get a bunch of messages after we released the Quarantine episode from people who didn't work in the gaming industry but shared that they could also relate to what these characters were going through during lock down. And I think that season two meld those two things really well.

Rob, you have said in the past that you were interested in exploring some sort of notions of masculinity. And your character Ian is certainly in an interesting situation where he has to share his power with Charlotte’s Poppy. How does he cope with that and why did you want to put him in that situation?

Rob: Yes, I'm fascinated with masculinity! I'm fascinated with how men navigate life and how it affects everything and everybody and especially people in workplace environments. And I love the idea that there's a character who would, if you called him hyper masculine that he would take that as a compliment, and he would say thank you. And to put that kind of person into a situation where he had to now share his power with somebody else that would be really difficult and that's why we wrote that in. I'll let Charlotte speak to what it's been like having to navigate that as a character.

Charlotte: I think that what's fun about the dynamic is that as Rob just said you do have this hyper masculine character, which often times you expect to be balanced out by a sort of gentle, generous, like a good female character. What we actually got with Poppy is a sort of an equally toxic narcissistic woman. Both characters are incredibly flawed. So, it's just like a lot of fun to get to play with this idea of instead of Poppy coming in and telling Ian off for having such a huge ego she's coming in and having an even bigger one, a lot of the time!