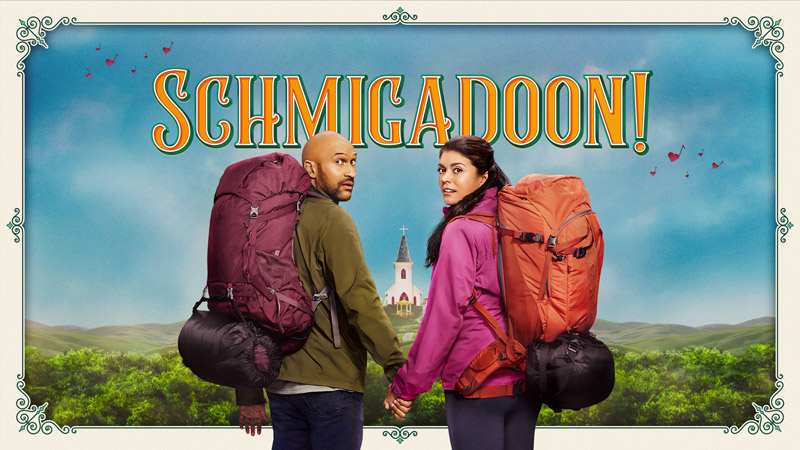 Apple TV+'s Schmigadoon! is both a parody and homage to the golden age of musicals in the 1940s and 1950s (think A Sound of Music, not Glee), and tells a story about a couple struggling with their love in a magical town full of, what else, music and dancing townspeople.

Created by Cinco Paul and Ken Daurio (both behind the screenplay of Despicable Me 2 & 3, the Secret Life of Pets) and directed by Barry Sonnenfeld, Schmigadoon! follows two doctors, Melissa (Cecily Strong) and Josh (Keegan-Michael Key), on a backpacking trip in an attempt to patch up their failing relationship, only to find themselves still arguing. They get lost and soon discover a magical town called Schmigadoon, which is perpetually trapped in a Golden Age-style musical, and slowly realize that they cannot leave until they find true love.

I caught up with Keegan-Michael Key for a quick conversion on his role in the series and among other things, on his definition of "love"

Schmigadoon! is about love, where to find it and how to define it. How would you define true love?

One of the things about true love is giving selflessly to another, and expecting nothing in return. That to me is true love because after all the sparks and all the romance goes away, are you still willing to give selflessly to another expecting nothing in return? After being together for 4, 12 and 23 years, are you still in that place where you're going to make the effort to make this relationship grow, build and blossom? After all, those endorphins are gone, and you have to find a way to rekindle those things, are you willing to put in that effort? And knowing that you love them no matter what, even if they love them where they are, you know, they may not be able to put as much effort in...are you still willing to give it all? To me that's, that's what true love is.

If you were stuck in a similar situation as your character, Josh, would you choose to be stuck in a rock musical, pop musical or a K-pop musical?

How much of Josh resonate with you or not, and how has that impacted your performance?

Actually, you know Josh does resonate with me, and, and I think a lot of people, you know, one of the things that I think that's actually a new discovery in my life is, if you want to experience life to the fullest you're gonna just have to do it outside of your comfort zone. You're gonna have to go there, there's just no other way around it. And there are points in the story where Josh even talks about what is he supposed to do here, and I think the analogy for vulnerability in the show is singing. When a person is too emotional to talk, when they want to reveal something, that's when they start singing, and Josh says numerous times throughout the show that he's not singing. He's not singing. And I know I've done that in my life I'm like, I'm not gonna go there emotionally. I don't want to go there emotionally, but that's where the magic happens. Vulnerability is where connection happens. That's where the magic happens. And so I learned that that's what I was bringing to Josh. He's constantly resisting. And if you stop resisting, that's when the magic happens.

What are your favourite musicals and why?

My favourite musical is Sweeney Todd The Demon Barber of Fleet Street. It's a very dark, dark, musical, but there's something about the glint...that my favourite part of that musical are all the little glimmers of light that happened in them. And the thing is, they kind of have to be crushed, and then come back up to be special. There's something about the tragedy of the yearning for something wonderful to happen, that it doesn't happen, and you get to have this wonderful kind of like ancient Greek catharsis. But then I also love Les Misérables. It's funny, the ones that tug at my heartstrings, the ones where there's unrequited love, or where one can't fully achieve something, those are the ones that really get to me. So, my two favourites would probably be Les Miz and Sweeney Todd. Oh and Godspell. Godspell mostly for nostalgic reasons.