Interesting sights from BroadcastAsia and CommunicAsia 2015

Interesting sights from BroadcastAsia and CommunicAsia 2015

With this year’s Broadcast Asia, OTT (Over-the-top) services again took the spotlight, with a lively debate going on about whether traditional broadcasters should look at OTT partners as rivals or partners moving forward. However, there was a fair amount of new products on display too, and here are some of the more interesting sights from BroadcastAsia and CommunicAsia 2015 : 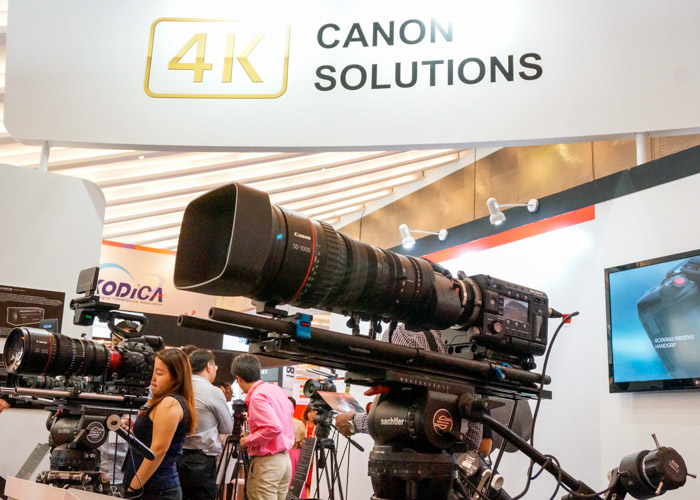 Canon showcased their latest 4K solutions at their booth, with a slew of 4K-capable cameras as well as some broadcast-grade zoom lenses that are suitable for both broadcast and cinema production, like the CN20x50 IAS H. 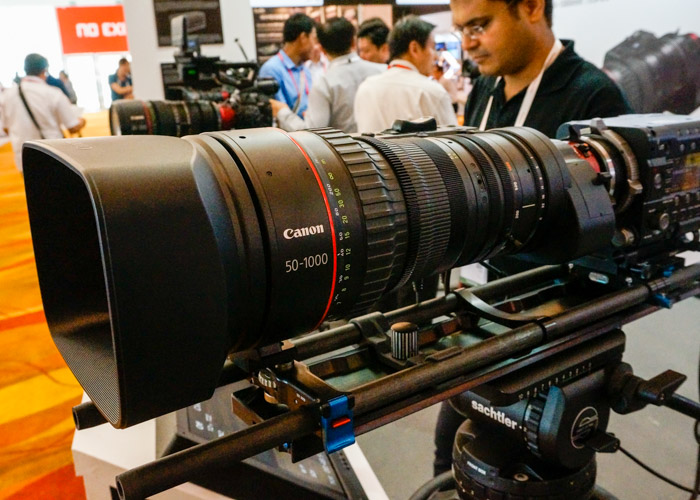 A 4K Super 35mm lens, the CN20x50 IAS H is a 50-1000mm T5.0-8.9 cine-servo lens that features an 11-blade aperture and comes with a built-in 1.5x extender. This makes it ideal for documentaries, sports and wildlife work, and the lens is meant to offer 4K quality imagery throughout the zoom range, giving filmmakers an extremely versatile tool to work with. 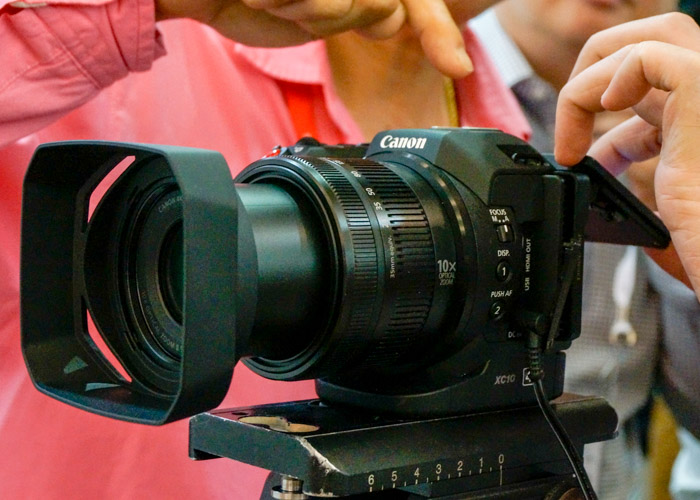 Also on display, was the recently announced XC10, a 4K UHD camcorder that gives you a 10X wide-angle zoom lens (27.3 -273mm) with separate focus and zoom rings. It features a tilting LCD monitor with Touch control, and is able to do internal 4K UHD recording at 24/25/30p with XF-AVC Intra codec up to 305 Mbps on CFast Card (MXF file). 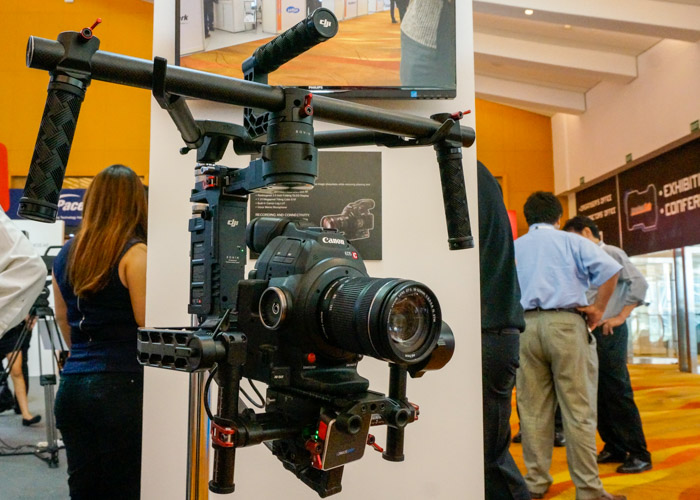 Of course, we couldn’t miss the EOS C100 Mark II on display. Also another fairly recent offering, the EOS C100 Mark II has a 4K CMOS Canon image sensor with ISO sensitivity from 320 to 102,400. It boasts dual pixel CMOS Auto Focus and Face AF, and is capable of doing simultaneous AVCHD and MP4 recording.

With the slogan of "A better life; a better world", Panasonic put on a very varied display of their products, perfectly showing off the offerings from all four of their divisions.

One of the most eye-catching displays though, was a 3D mapping projection onto a Tesla car at the front of the booth using their 20,000 lumen PT-DZ21K Quad-Lamp 3-Chip DLP projectors. The projectors offer high brightness and best-in-class reliability, while the Tesla car featured is actually powered by battery cells produced by Panasonic. 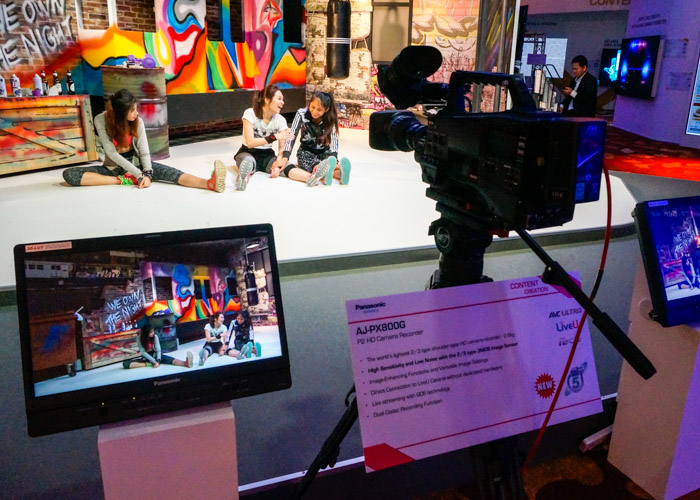 Also on display, were several new HD-camcorders. A slew of cameras were set-up around a stage where dancers performed, giving participants a real feel of how the cameras would perform in a production environment. The AJ-PX800G displayed here is a new ⅔ type shoulder-mount HD camcorder that features a ⅔ type 3MOS Image Sensor and supports live streaming with QOS technology. 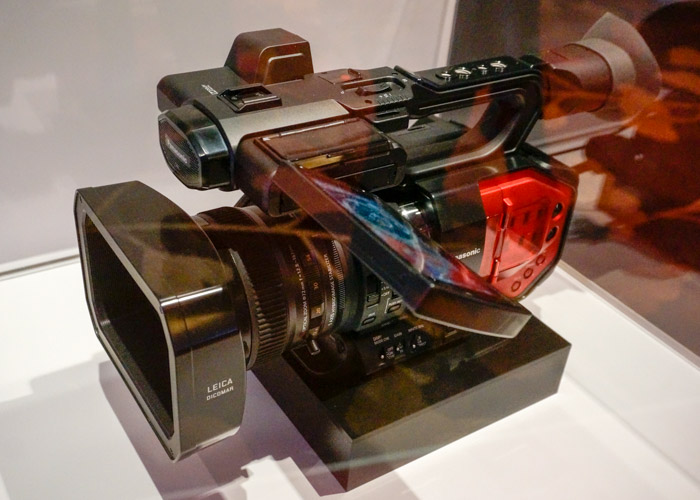 And let’s not forget the recently announced AG-DVX200 4K Handheld Camcorder, a 4K Handheld camcorder that boasts a Leica Dicomar 4K f/2.8~4.5 zoom lens that has a 35mm equivalent zoom range of 28-365.3mm. 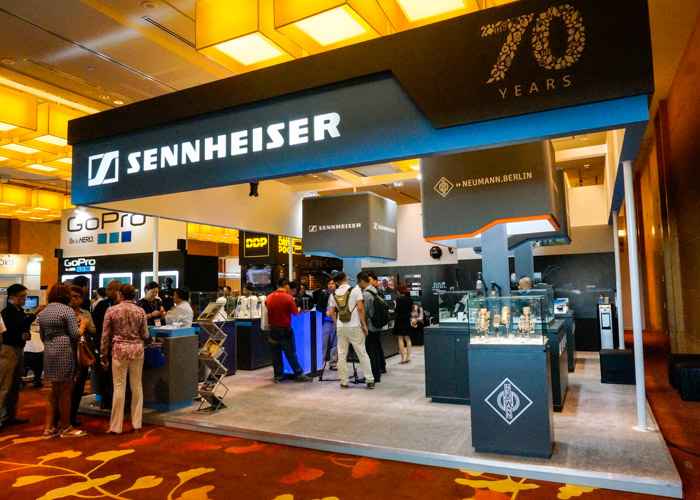 On the audio front, Sennheiser also had a fairly large booth, with an array of their latest headphones and microphones on display. 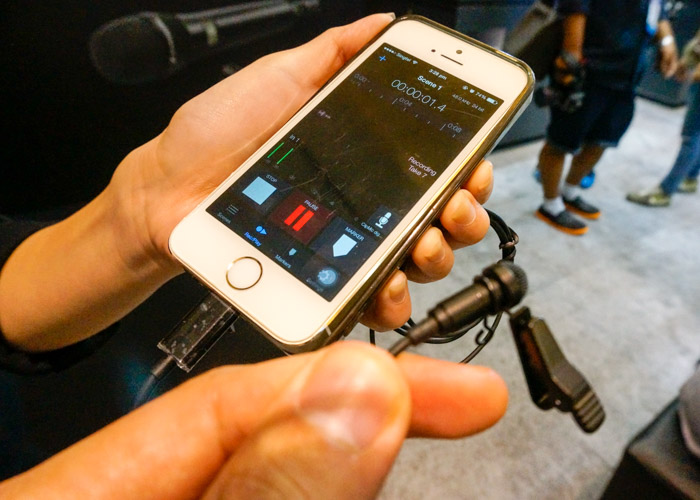 There was an interesting selection of professional and prosumer solutions showcased, like the ClipMic digital, clip-on microphone for iPhone, iPad, and iPod touch. It’s powered by lightning cable so all you do is plug in the mic and start up the Apogee MetaRecorder app (a free download from App store), and you can start recording direct to your phone or tablet. 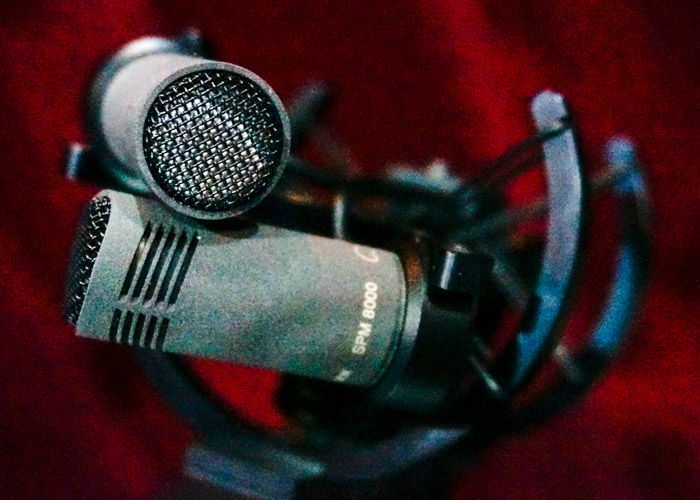 The other thing of interest, was the demo booth for the SPM 8000, where Sennheiser showcased how the microphone gets you true surround sound when plugged into their Esfera system. The system consists of the SPM 8000 stereo microphone and the SPB 8000 rack processor and decodes a stereo source into 5.1-channel audio. Because the SPM 8000 microphone has 2 RF condenser microphones arranged in a XY configuration, the system is able accurately place sounds with direction and weight. 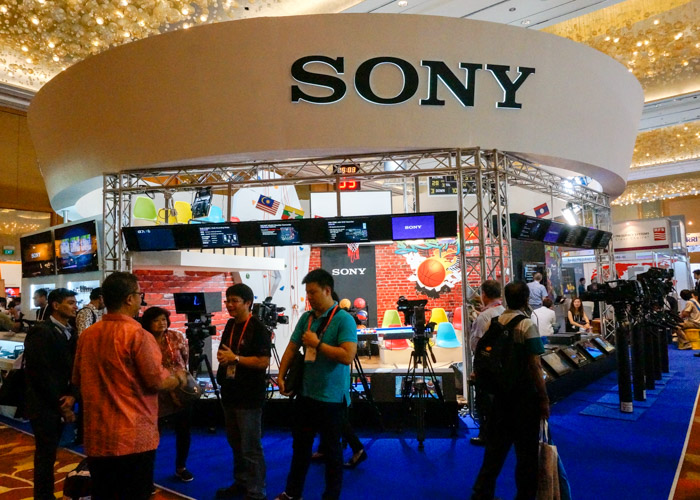 Sony was another participant with a large booth, and central to their display was a live-action area where they had models playing pool at parts, and a dance team going through a routine. 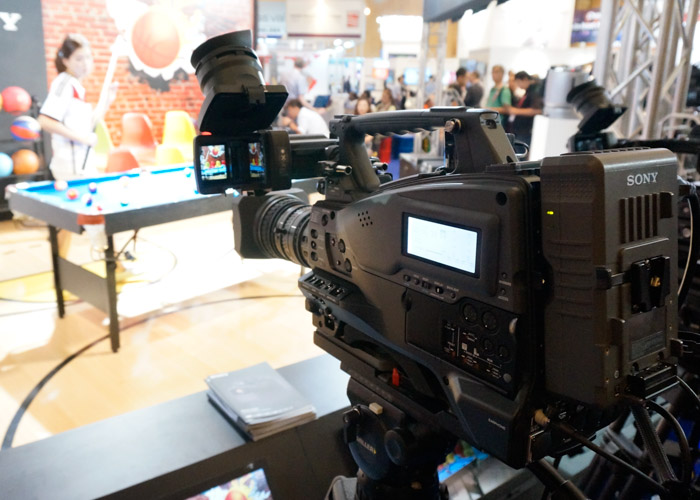 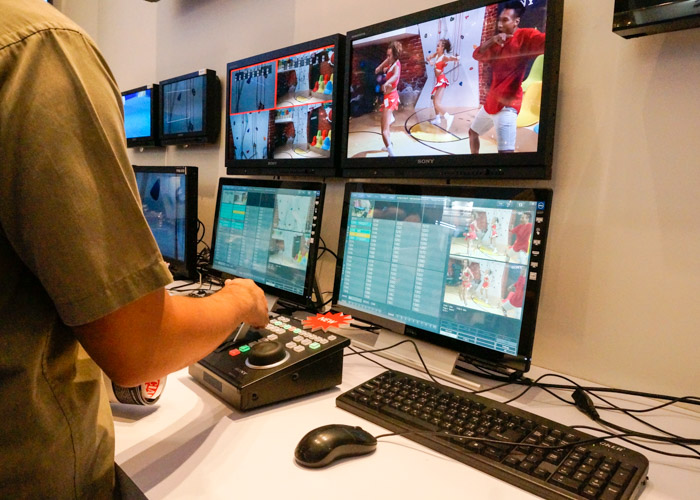 Some of the feed was directly over to switchers at the back of the booth, allowing visitors to try their hand at the type of real-time editing that was possible during broadcast. 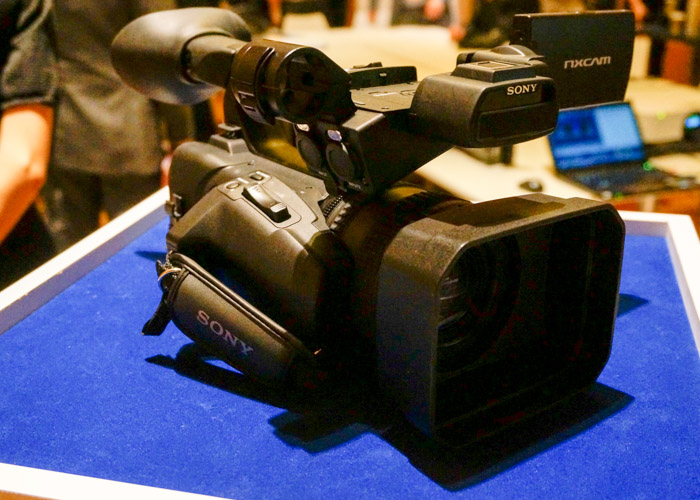 Another of Sony’s latest releases, the HXR-NX100 is the latest addition to the NXCAM range and features a 1” Exmor R back-illuminated 20-megapixel CMOS sensor that’s roughly the same size as a Super 16mm film frame. The Sony G lens offers a 12x optical zoom that can be extended to 24x with Clear Image Zoom.

Down at CommunicAsia was an interesting set of robotics and green vehicles. Using 3D printing techniques to create the body shell, the vehicles look sleek and futuristic, and are built with energy efficiency in mind as they run on a combination of fuel and electrical energy. 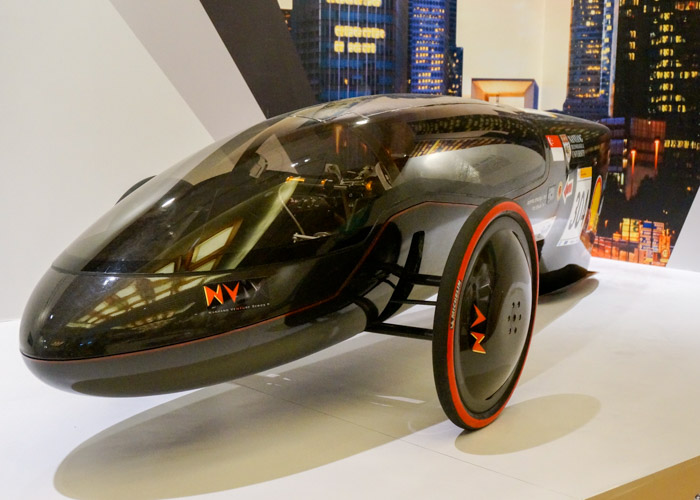 The NV9 (NTU Venture 9) was designed by students of NTU’s College of Engineering to compete in the Shell Eco Marathon Asia (SEMA). It runs on energy extracted from combustion of fuel or electrical energy from battery or hydrogen fuel cells and can go 218km for every kWh of electricity consumed. 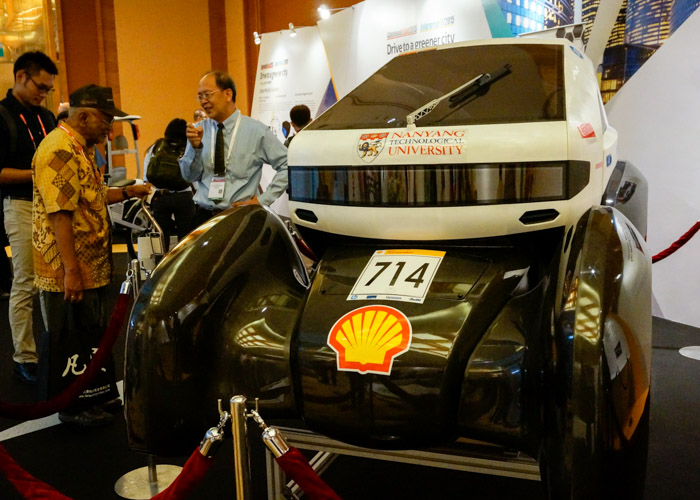 The NV8 (NTU Venture 8) is another energy efficient vehicle designed by students of NTU’s College of Engineering to compete in the Shell Eco Marathon Asia (SEMA). It’s a 4-wheel urban concept micro-car with a body shell built using 3D printing and mounted on a carbon fibre chassis and is fully drivable. 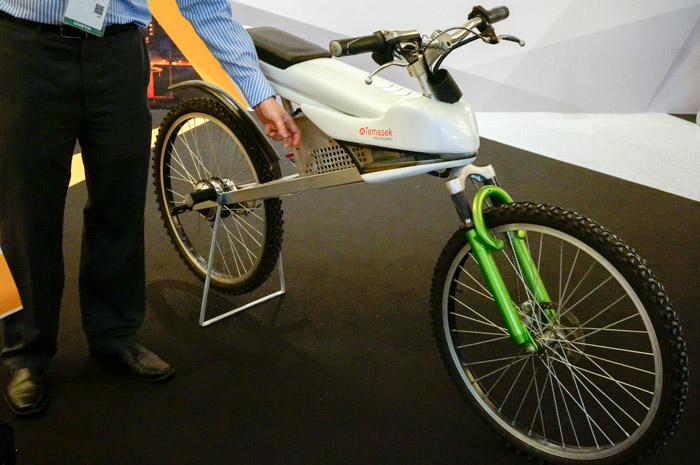 Similarly, students from the School of Design and School of Engineering from Temasek Polytechnic have come up with an Iconic Fuel-cell Personal Shuttle Commuter vehicle that looks like a regular bicycle is powered by a hydrogen fuel cell. Meant to draw hydrogen and oxygen from the surrounding air to be converted into electrical energy through a chemical reaction, the vehicle creates no gas emissions and should be able to travel at speeds of about 25km/h. 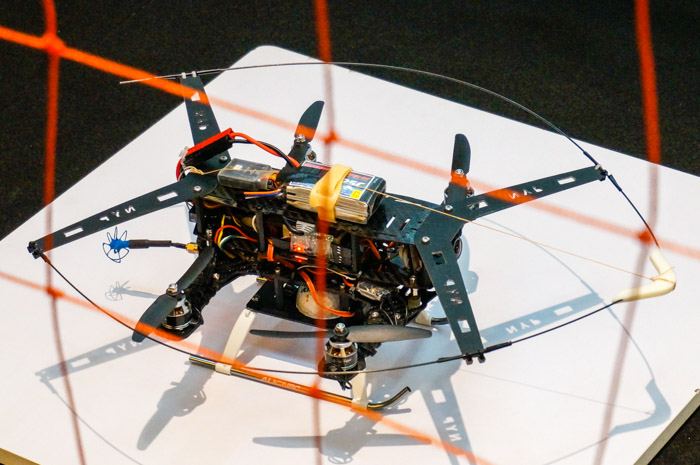 Of course, there was also a couple of drones on display, and this one was used for a fly-by-video drone demonstration. It has an on-board camera to give the operator a First-Person-View (FPV) for the pilot, allowing him to fly it through a maze, avoiding any obstacles along the way.