Intel's Sandy Bridge - the Next Gen

After numerous leaks interspersed with the official word from Intel, it's no secret that Intel's next-gen Core processors, codenamed Sandy Bridge, were coming out in January 2011. We heard about the underlying CPU microarchitecture at last year's IDF and covered it in some detail. However, we didn't actually get our hands on the processors until last December so we had no idea what kind of performance improvements that Sandy Bridge would bring.

In our short time with the Sandy Bridge samples, any doubts that we had about Intel's first monolithic processor to integrate graphics processing elements have been answered. A new, more refined version of Turbo Boost that allows for greater speed bins above its base frequency, including the ability to dynamically increase the graphics clock, a new ring bus architecture with a shared cache that's accessible by both the general-purpose and the graphics processing units, new Intel Advanced Vector Extensions instructions that aid in floating point intensive applications, and lower power consumption due to its use of 32nm process technology - these are but some of the highlights of Intel's new CPU architecture. 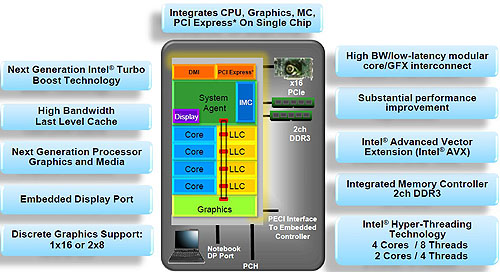 Going by Intel's relentless Tick-tock strategy, Sandy Bridge is the 'tock' to Westmere's 'tick'. Westmere is of course where we first saw Intel's debut 6-core processor, the Intel Core i7-980X. As it's not the wisest decision to have both a new manufacturing process (like going from 45nm to 32nm) together with a new CPU architecture (just ask NVIDIA), Intel's strategy has been to field-test the new process on an existing architecture. Hence, Sandy Bridge is the new microarchitecture that is built on Intel's now mature 32nm process. Following that, we'll see Ivy Bridge next year, which presumably is an even more optimized Sandy Bridge using a 22nm process.

But we are getting ahead of ourselves here. Sandy Bridge is therefore Intel's first new CPU microarchitecture since Nehalem, which was itself quite a departure from the Core 2 microarchitecture before. While Nehalem saw the debut of QuickPath Interconnect (QPI) and the integration of a memory controller, Sandy Bridge sees the integration of graphics processing units within the CPU die itself. Unlike the transitional 32nm Clarkdale where there was a pseudo-integrated but in reality, distinct graphics core on the CPU die package (the graphics core was in fact built with a 45nm process), there's no separation between the CPU and graphics on Sandy Bridge. The graphics is finally truly integrated.

As Intel explains it, this integration reflects the shift in computing trends and how we're increasingly consuming media which stumps the CPU. Tasks like encoding, decoding video require specialized hardware that can be found on discrete graphics cards and while they can be done through software, the CPU is not best equipped to handle them. This issue is especially pertinent for notebooks, which due to battery and weight constraints, are less likely to have discrete graphics solutions.

It only means that integrated graphics have to get better. Intel has been improving on this aspect, albeit slowly. With each generation however, we have seen the media processing capabilities for Intel's HD graphics expand. Sandy Bridge builds on this, like having even more fixed function hardware for video processing for example. Known as Intel Quick Sync, the implementation includes hardware support for the entire encoding process (for up to 1080p MPEG2, VC-1 and AVC), making it faster than ever for tasks like transcoding videos.

Adding to this, the new integrated graphics now support HDMI 1.4 and 3D Blu-ray, so you can play these videos on your Sandy Bridge PC without requiring a graphics card from AMD or NVIDIA (3D glasses and TV not included).

There are two variants, found on different Sandy Bridge processor models. Intel HD Graphics 2000 and 3000. The main difference between the two lies in the number of graphics processing units or Execution Units (EUs) as Intel calls them. 2000 comes with only six such EUs while the 3000 doubles that to 12.

The extra units will come in handy when it comes to gaming performance. The maximum clock speeds for these EUs also vary; it's either up to 1350MHz or 1100MHz, depending on the processor model. They are not yet DX11 compliant, but those who are using integrated graphics are unlikely to care or even know about this.

Below is Intel's summary on what's changed from the last gen. 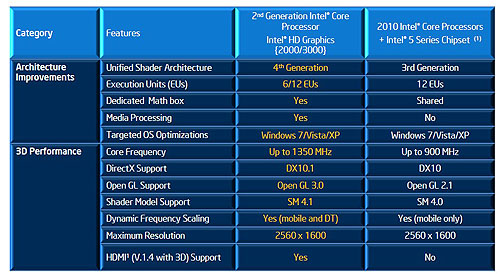 Intel is launching both mobile and desktop variants, but the availability of the mobile parts obviously lies with notebook manufacturers. One should find the desktop processors in stores already, with more than a few processors available for sale way in advance of the official launch. As for the desktop processor, it comes in a new LGA1155 package that signals a new platform. Although it may seem to differ by just one pin to the existing LGA1156, it's not electrically possible to use LGA1156 processors on these new boards or the other way round.

Motherboards using Intel's P67 and H67 Express chipsets are currently the only ones that support Sandy Bridge processors. We have previewed some of them and you can expect a shootout featuring these boards in the near future.

Finally, let's get to the Sandy Bridge lineup. Intel is launching eight desktop models, all of which are practically the same physical size as older Lynnfield processors despite the fact that the quad-core Sandy Bridge packs around 995 million transistors compared to a Lynnfield's 774 million. The naming scheme, the Core i3, i5 and i7, remains, though there's an extra digit now to differentiate. There are also Intel's 'K' processors, which were introduced only last year for processors that have unlocked multipliers for overclocking. Given the word on the extremely limited amount of bus overclocking available on Sandy Bridge, getting a 'K' processor is a must for aspiring overclockers. 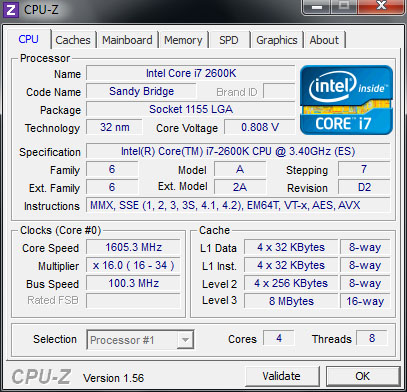 From what we can see, HyperThreading is only found on the Core i7 and the dual-core models (the dual-cores however have no Turbo Boost). The main bulk of these processors, the Core i5 are quad-core processors with no HyperThreading support. The amount of cache is another distinguishing factor between them. TDP is reasonably low at 95W for the quad-cores and you can expect a decent amount of Turbo Boost on them too.

With a price of US$317 (for 1k units) for the top, unlocked, 'K' Core i7-2600K, it is slightly less expensive than the launch price for Intel's Core i7-875K. The Core i5-2500K however, with its US$216 price tag looks to be the deal among the processors here, at the expense of HyperThreading and some cache. Meanwhile, the least expensive processor, the dual-core Core i3-2100 is just over US$100, putting it a bit more costly than AMD's low-end Athlon II quad-cores. Overall, it's a US$200 price range for Sandy Bridge processors, covering the mainstream segment.