Note: This article was first published on 23rd April 2019.

Your next gaming laptop will be getting an upgraded processor pretty soon. Intel has announced brand new high-performance 9th-generation processors for laptops, following on the launch of its desktop parts last October.

However, this also means that this is mostly an iterative upgrade that doesn't bring anything super new to the table. Make no mistake, these are still 14nm processors based on the familiar Coffee Lake architecture. Instead, the upgrades come mainly in the form of more cores for the Core i9 SKUs and higher base and Turbo Boost 2.0 frequencies.

Like their desktop counterparts, they will also support up to 128GB of DDR4 memory. That's already overkill for a mainstream desktop system, and even more so for a laptop, but it does open the door to seriously beefy mobile workstations if someone wants to build one.

In addition, Intel is also talking up the connectivity options it's enabling on laptops. Wi-Fi 6, or 802.11ax, is coming, and Intel is looking to take the lead with its Wi-Fi 6 AX200 chip, which has also been dubbed Gig+. In a nutshell, this means speeds beyond Gigabit Ethernet can offer (hence the namesake) and up to 2.4Gbps. It will also better handle congested environments where multiple Wi-Fi networks or devices exist. The company is also claiming up to a 75 per cent reduction in latency, thanks to the improved spectral efficiency of Wi-Fi 6. 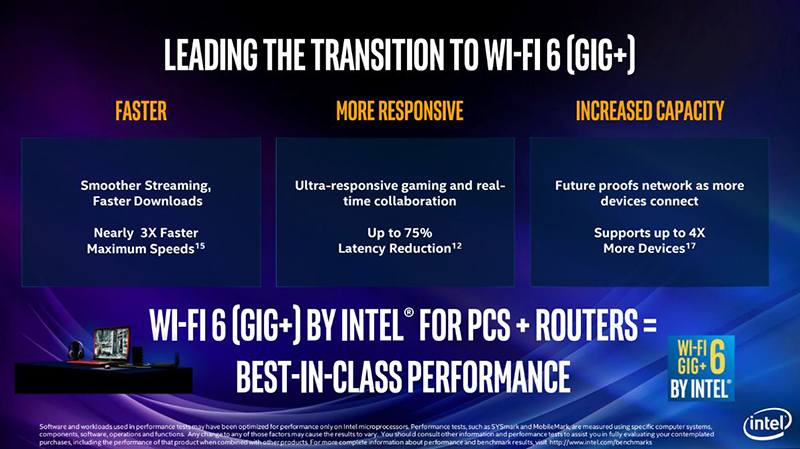 This is partly possible because of something called Orthogonal Frequency-Division Multiple Access, or OFDMA for short, which allows different devices to be served by a single channel. This is done by taking a Wi-Fi channel and dividing it into smaller frequency allocations, which can then be allocated to multiple clients. This is greatly simplifying it, but OFDMA basically lets more clients connect to a single access point at the same time, so it could let applications that previously required a more reliable wired connection, such as games, run wirelessly instead.

That said, you're probably more interested in the specifications of the new chips. Here's a quick rundown of them:

Right off the bat, you'll notice something Intel is calling Thermal Velocity Boost, which automatically boosts the clock frequency by up to 100MHz if it sees the opportunity to do so. This is generally when the processor is operating at 70°C or lower and there is still some available power/thermal budget. Intel hasn't really drawn attention to this feature in the past, but it was actually first introduced on its 8th-generation Coffee Lake H-series parts.

That aside, the 9th-generation line-up isn't an exact replica of the 8th-generation processors with the number '8' swapped out. There are some new SKUs to contend with, such as the Core i9-9880H. This chip is very similar to the Core i9-9980HK, albeit with less aggressive base and boost frequencies and a locked multiplier.

According to Intel, the overclockable Core i9-9980HK is targeted at those who need the absolute best performance, such as gamer enthusiasts, while the Core i9-9880H would maybe be more suited for content creators. Compared to last generation's hexa-core Core i9-8950HK (2.90GHz, 12MB L3 cache), the Core i9-9980HK is supposedly up to 18 per cent faster in Hitman 2 and can deliver 2.1 times more performance while streaming Call of Duty: Black Ops 4. Note the emphasis on game streaming as these high performance chips are more suited towards multi and mega-tasking needs than outright performance on one main application/game.

The Core i9-9980HK is also Intel's first 8-core/16-thread Core i9 mobile processor that can boost up to 5.0GHz on a single core, which is pretty impressive for an octa-core mobile chip to say the least. There's just one caveat though. The 5.0GHz figure is being cited under the assumption that the Thermal Velocity Boost feature is active, so it's questionable as to whether the chip will be able to maintain such high speeds consistently. 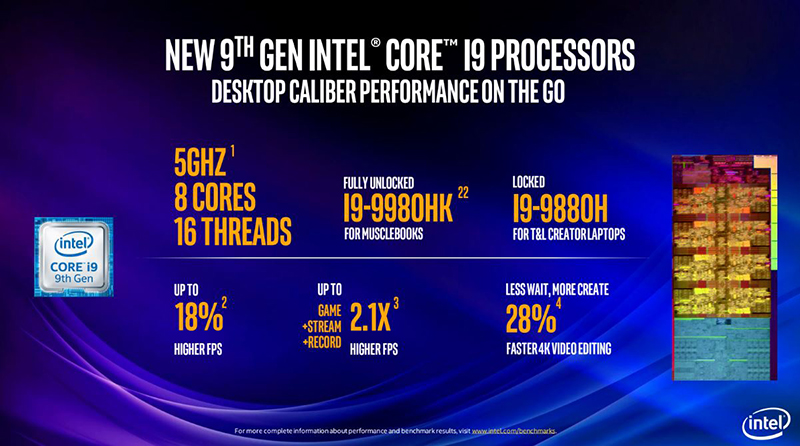 Of course, Intel is also hoping that its 9th-generation mobile processors will tempt owners of older machines to upgrade. Compared to a 3-year-old system, the chipmaker says that you can expect up to 56 per cent better performance in games and 54 per cent faster 4K video editing. 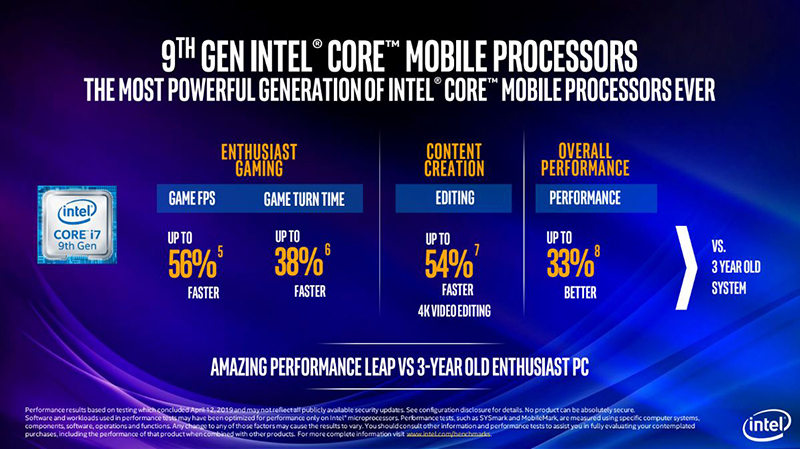 But mobile chips aside, Intel is also announcing expansions to its 9th-generation desktop range. Back in October 2018, it announced mostly enthusiast-grade processors targeted at serious gamers and content creators, but it's finally ready to show some love to mainstream consumers.

It is rolling out a total of 25 new 9th-generation desktop processors, spanning the gamut from entry-level Celeron, Pentium Gold, and Core i3 chips to high-end Core i9 models. This is also the first time that Core i3 chips will get support for Turbo Boost 2.0, and it's nice to see Intel bringing more features to its more affordable processors.

Having said all that, this is all very much par for the course. Clock speed boosts and higher core counts are always welcome, but the announcement that everyone is really waiting for is the 10nm Ice Lake chips.