So now that you know about the switchable graphics, thanks to Virtu, on the Z68 chipset, what about the other big thing touted by Intel? That's none other than Intel Smart Response Technology, a fancy, marketing term for what is essentially, using a solid-state disk (SSD) as a cache for your frequently used applications. Now, for those who have no idea what a cache is for, you should know that most modern processors come with different amounts of cache, with even a hierarchy of caches, like L1 and L2.

Without getting too technical, you can think of a rough sketchbook where the PC leaves its oft-used applications and data, because it's very likely that they will be called into use again in the next moment. The system can leave this data in many areas, like system memory or the hard drive. But it's usually much faster to access the cache on the processor (faster due to the fact that it uses higher speed RAM and also, for the case of the cache on the CPU, located very close to the processor).

However, the amount of cache on a processor is limited due to the relatively small size of the processor, and is hence, a very expensive computing resource. Therefore, other alternatives, like system memory and the hard drive are used. So, if one has to rank the various layers of cache or cache-like storage on a modern PC from the fastest to the slowest, it goes like this: cache on the CPU, system memory, and then your hard drive. Logically, one uses the fastest available storage until it is exhausted and then the next and so on.

What Intel Smart Response enables is this: a small-capacity SSD is used as an additional layer of cache that sits between system memory and your mechanical hard drive. Since a SSD is significantly faster than your mechanical hard drive, it will improve system performance to have your frequently used data blocks there instead of on the hard drive. And all this will be handled automatically by the Intel software.

Of course, this feature is moot if you're already using a SSD for your primary hard drive, which is what some users are doing with a small, say 40GB 'boot' drive to store their applications and operating system. The drawback with this approach is that there is limited capacity on such a small SSD primary drive, while a larger one, say 120GB would then be too costly for the typical user.

Intel Smart Response brings the best of both worlds - the system sees the large capacity of a mechanical hard drive while the SSD cache improves their performance. This is in fact what some hard drive manufacturers like Seagate, has already done with their products - a solid-state hybrid.

Along with the introduction of this technology, Intel has launched a new SSD, codenamed Larson Creek. This small, 20GB SSD is designed as the perfect partner for Intel Smart Response. Thanks to its use of SLC NAND (Intel's 34nm process), it is much faster for writes than the MLC variant and will also have a longer lifespan. Naturally, it won't be going for cheap, with Intel pricing it at around US$110, which would put it at around the cost of a MLC drive twice its size or in other words, the amount you would usually pay for a small boot drive. 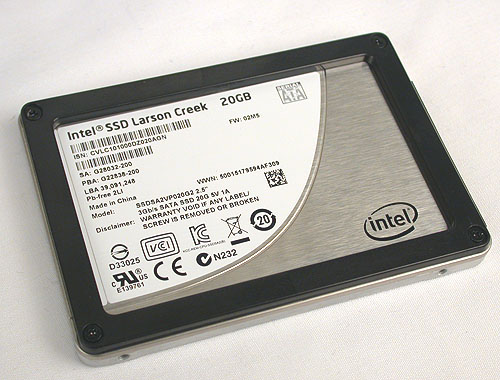 Intel Smart Response technology obviously requires the Z68 chipset, along with the appropriate Intel Rapid Storage technology drivers (version 10.5). Also, the maximum size for the SSD cache is 64GB (any extra storage will not be used as cache, but as normal storage), the minimum size is 18.6GB and you can only have one SSD cache for each system. Most importantly, you must set your hard drive to RAID mode (not IDE or AHCI).

There are two modes available for Intel Smart Response - Enhanced, which is write-thru cache and Maximized, which is write-back cache. The primary difference is that the highest level of performance will be achieved using Maximized, but there's also a greater risk of data loss since the data is written only to the cache (SSD). In the event of power failure, data may be lost.

In Enhanced, any writes are applied to both the SSD and your normal hard drive, so while you're restricted by the hard drive speed in some way, the data on both drives are always in sync.

As for the actual setup process, after reading the manuals and documentation, we recommend the following simple steps: 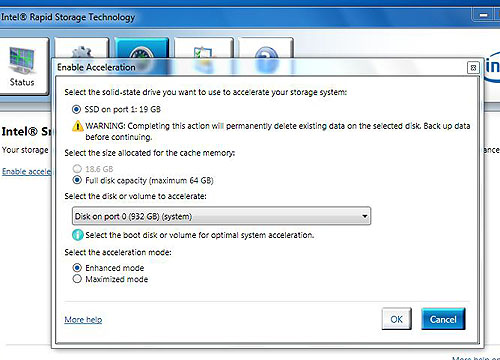 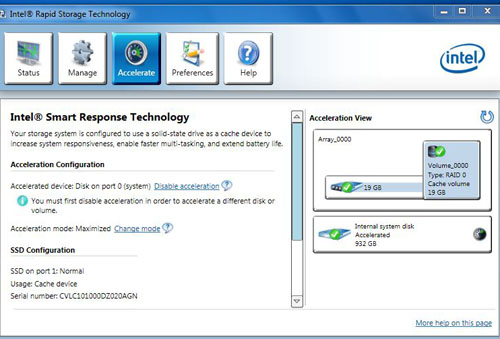