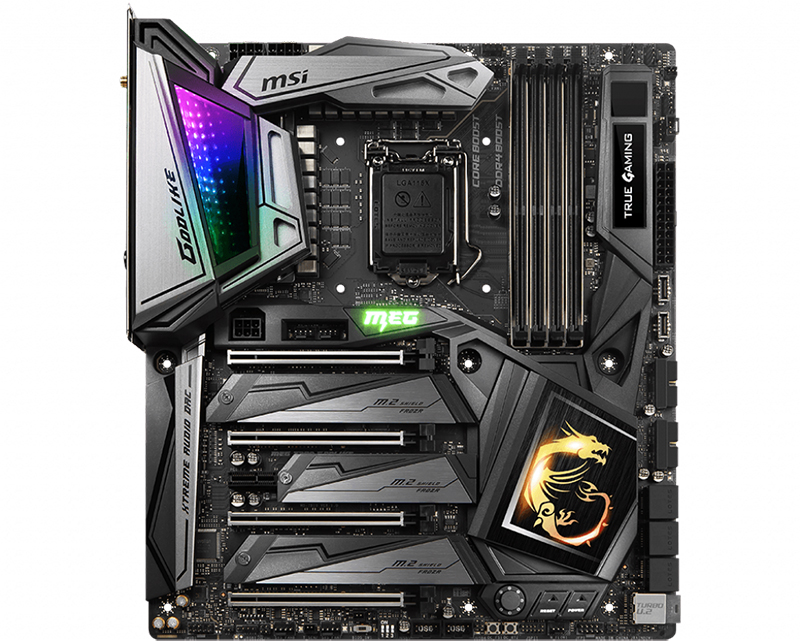 The MSI MEG Z390 Godlike is all about spectacle. From its name down to its design (and yes, price), the Godlike wants to capture your attention. Its eye-watering S$859 price tag may not be so pleasing, but this is a motherboard that otherwise tries to cram in just about every feature an enthusiast could need.

This behemoth E-ATX board boasts an 18-phase VRM, with 16 phases dedicated to the CPU alone. In theory, more power phases means cleaner and more reliable power for the CPU, even though it’s often the quality of components and the method of implementation that matters. Either way, MSI’s power design looks impressive on paper, and I’d expect nothing less than top-notch components from a board of this price. 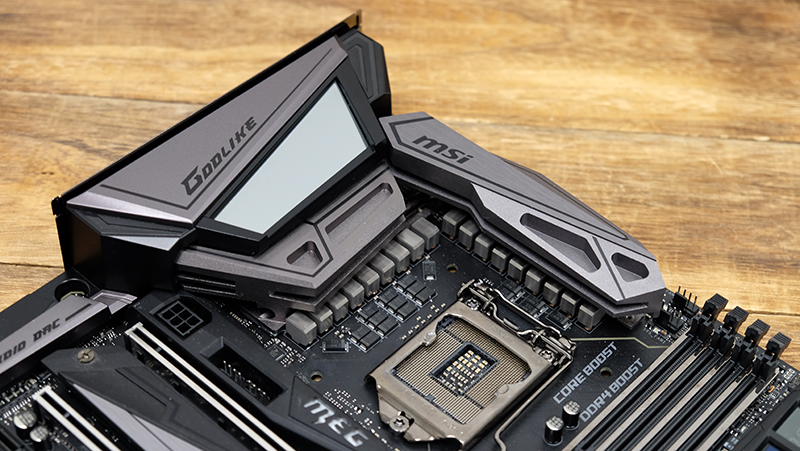 This is a board made for overclocking, and it also comes with two 8-pin power connectors for the CPU, in addition to an extra 6-pin PCIe graphics power input. The latter is targeted at heavy overclockers using multiple graphics cards, which is precisely the target audience of the Godlike motherboard. However, it’s located above the topmost PCIe 3.0 x16 slot, and it doesn’t seem like you’ll be able to get it connected without a ton of cable clutter. 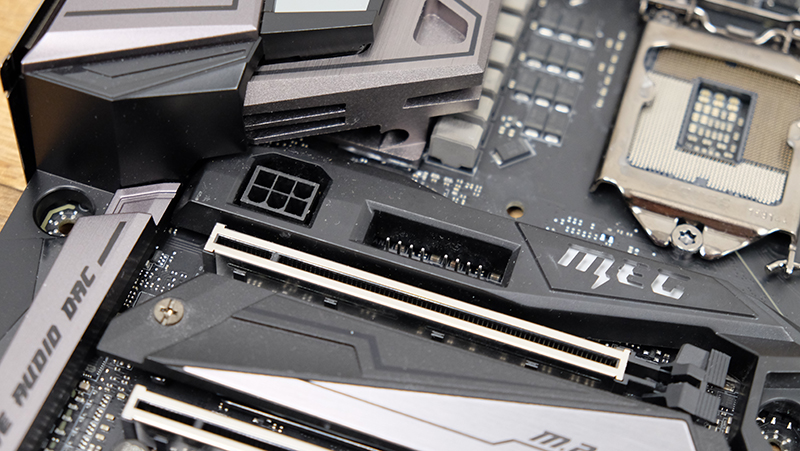 Like most of the other boards here, the VRM circuitry is cooled by massive heatsinks, which may pose a problem if you’re looking to install a really large air cooler. Still, most folks gunning for this tier of boards are likely to opt for an AIO liquid cooling solution, in which case, it shouldn't see too much of an issue.

The I/O shroud features what MSI calls Mystic Light Infinity, which takes the form of an incandescent light show that creates the feel of an infinity mirror when you peer into its depths. In the flesh, it’s stunning, and it’s one of the more unique RGB lighting effects I’ve seen on a motherboard today. The right of the board also houses the Dynamic Dashboard, which comprises an OLED display, much like the one on the ASUS ROG Maximus XI Extreme, and a debug LED display. 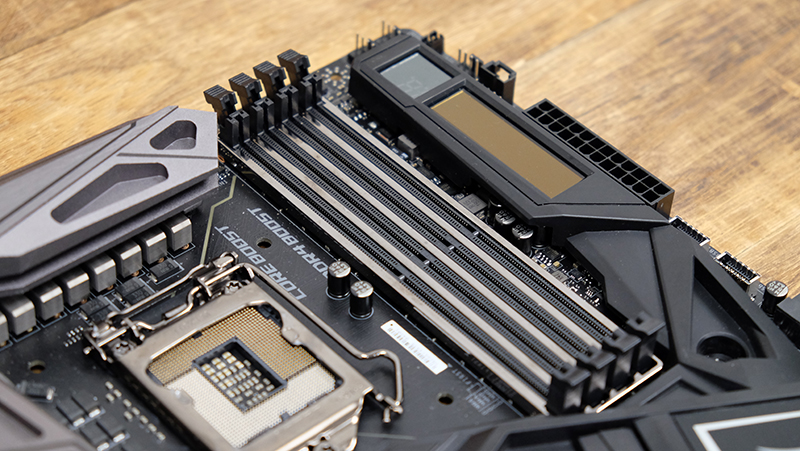 The OLED display can show useful information such as CPU clock speeds, temperature, and even error messages. Alternatively, you can upload your own animated GIFs using MSI’s software to make the board truly your own.

You’ll also find four EZ debug LEDs in the area, and they’ll light up when there’s a problem with the CPU, DRAM, VGA, or boot device.

The bottom right corner of the board houses the Game Boost knob, dedicated power and reset buttons, and a bunch of overclocking-related controls. The Game Boost knob is a feature that remains unique to MSI, and it lets you manually select an overclocking stage from 0 to 11. The processor’s voltage and frequency will be automatically adjusted after you power on the PC. Of course, a successful overclock is not guaranteed, and it’ll very much depend on the chip you have and your cooling solution. 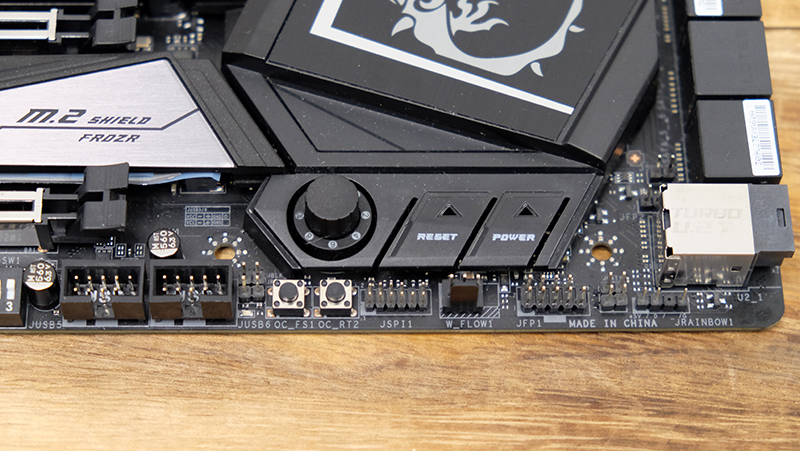 On top of that, MSI has included dedicated buttons for forcing the system into BIOS (without showing any failed overclock message) and retrying your OC settings until a successful boot. A dual BIOS switch, a Slow Mode booting jumper, and 10 fan headers round off the main feature set.

Having said that, MSI really decided to cram in just about every feature it can think of. In addition to the six SATA 6Gbps and three M.2 sockets, it’s also included a U.2 port that has also been reinforced with metal. All three M.2 sockets have their own dedicated heatsinks as well, and they all support both PCIe and SATA devices. That’s not all though, and there are heatsinks beneath each slot as well, so MSI clearly put in a lot of effort to ensure that your drives run cool. 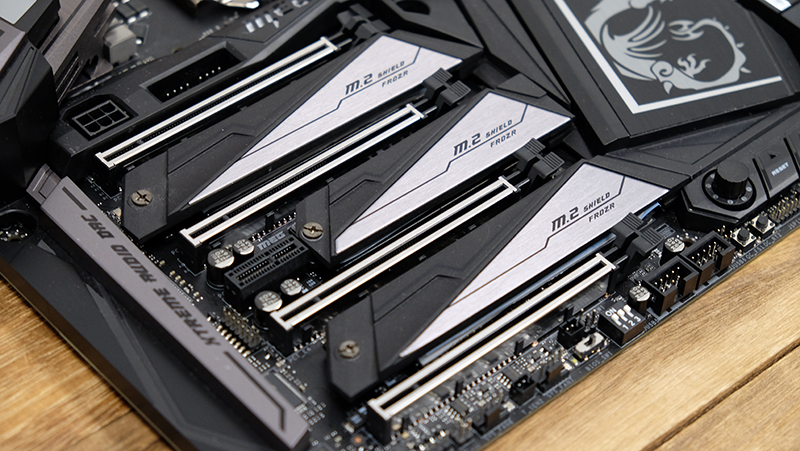 The M.2, SATA, and U.2 ports share PCIe lanes though, so you’ll want to check the board’s manual for a combination you can use. 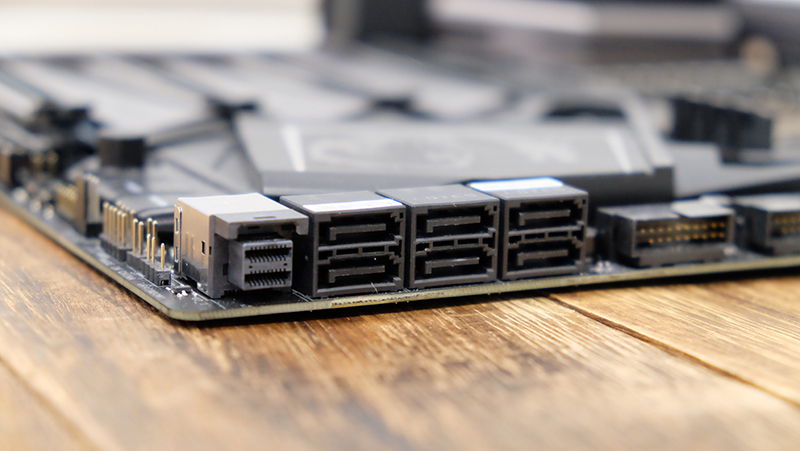 Round the back, you’ll find an integrated I/O shield and plenty of ports and connectors. There are a total of two USB 3.1 (Gen 1) Type-A, three USB 3.1 (Gen 2) Type-A, one USB 3.1 (Gen 2) Type-C, and two Gigabit LAN ports powered by dual Killer E2500 controllers. Another nice touch is the dedicated 6.3mm headphone jack, which should help accommodate a range of high-end headphones without the need for an adapter. 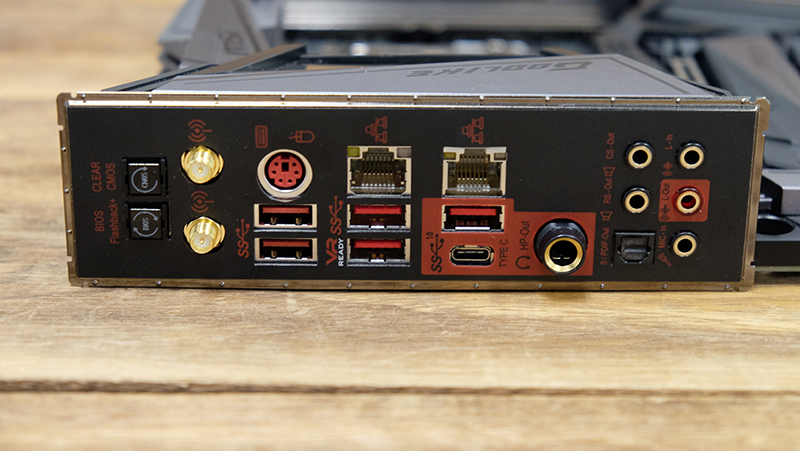 There’s support for onboard Wi-Fi as well, by way of a Killer Wireless-AC 1550 adapter that supports a maximum throughput of up to 1.73Gbps. The only thing missing is a 10G LAN port, a surprising omission given everything else MSI has thrown in.

Finally, the Godlike comes with not one, but two, expansion cards. The first is the M.2 Xpander-Z, a PCIe card that provides two more M.2 sockets. That’s a nice bit of added flexibility to have, but what really stands out is the Streaming Boost capture card. It basically lets you plug an HDMI output from another PC, console, or even phone into the card and stream directly from there. Casual users won’t have much use for it, but those looking to get serious about streaming could definitely have some use for it. 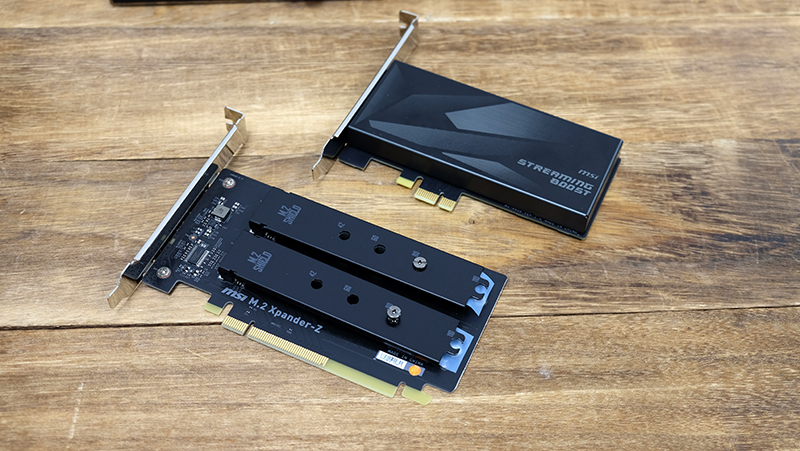