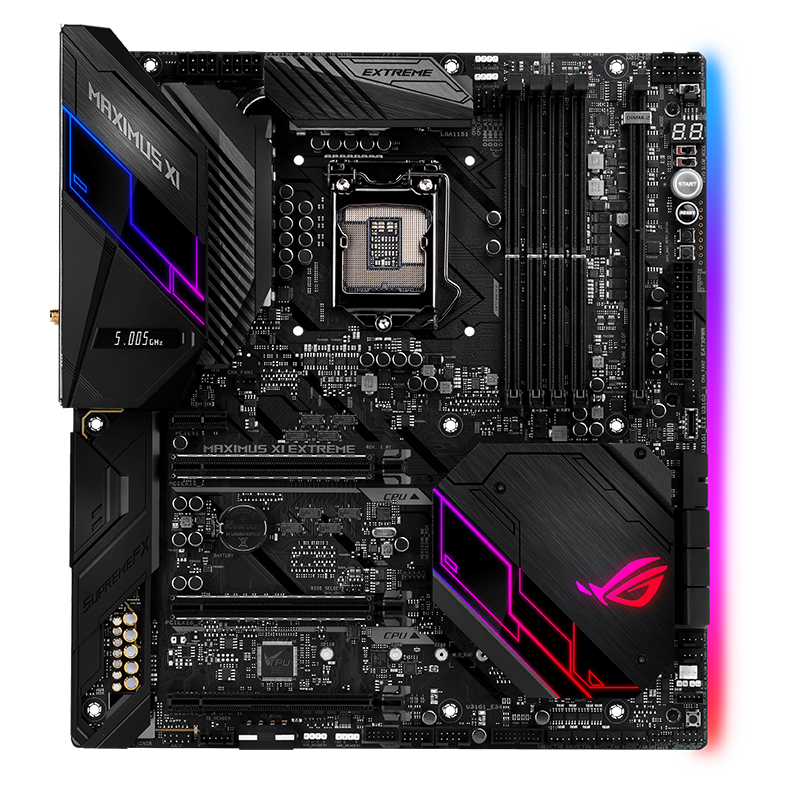 The ASUS ROG Maximus XI Extreme sits right at the top of ASUS’ Z390 line-up. The Extreme series has always represented the pinnacle of what the company has had to offer, and it’s often paired with a stiff price that only the most serious of enthusiasts would cough up.

That said, this year’s Maximus XI Extreme is not in fact the most expensive motherboard in this shootout. At S$739, it’s cheaper than both Gigabyte’s and MSI’s offerings, so it’s not even the craziest offering you can spring for.

Still, this is an E-ATX board crammed with a bunch of premium features, many of which are geared toward overclockers. For instance, you get dual 8-pin power connectors for the CPU to ensure that the board can keep up with the higher voltages required. The board is also equipped with a 12-phase VRM design, and the MOSFETs and chokes are cooled by beefy VRM heatsinks that are connected to each other via a single heatpipe. 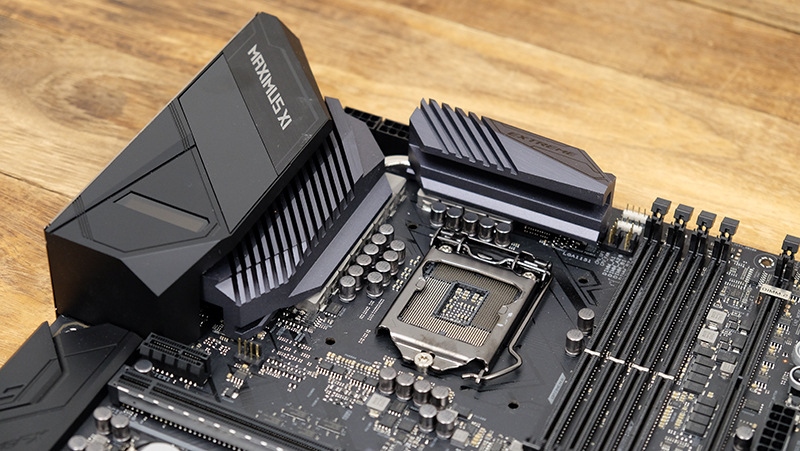 More importantly, when I said that this is a board designed for overclocking, I really meant extreme overclocking. On the right side of the board, you’ll find an overclocking panel of sorts with DIP switches and dedicated start and reset buttons. Overclockers will find this super handy, as many of the buttons and switches are intended to help you tweak your overclocks and recover from failed settings.

For starters, there’s the Safe Boot and ReTry Buttons. The Safe Boot button forces the system to reboot into BIOS safe mode, where safe settings are temporarily applied to enable you to boot up. However, your overclocked settings are retained, so you can easily modify the settings causing boot failure. The ReTry button comes in when the reset button fails, and it forces the system to reboot continually with the same settings until a successful POST is achieved. 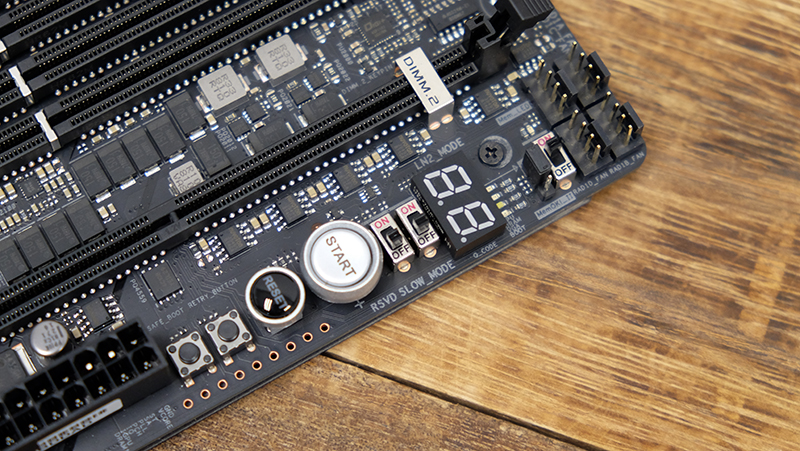 Then there’s the Slow Mode switch, which only applies to LN2 cooling. Slow Mode decreases the processor frequency and helps stabilize the system during the extremely high clock speeds achieved during LN2 overclocking. There’s also an LN2 mode jumper, which activates LN2 mode and optimizes the motherboard to handle cold boot issues.

To cap things off, there’s of course dual onboard BIOS, and you can toggle between them using the BIOS button at the bottom right of the board, so you can test out different settings more quickly or recover more easily from failed overclocks. 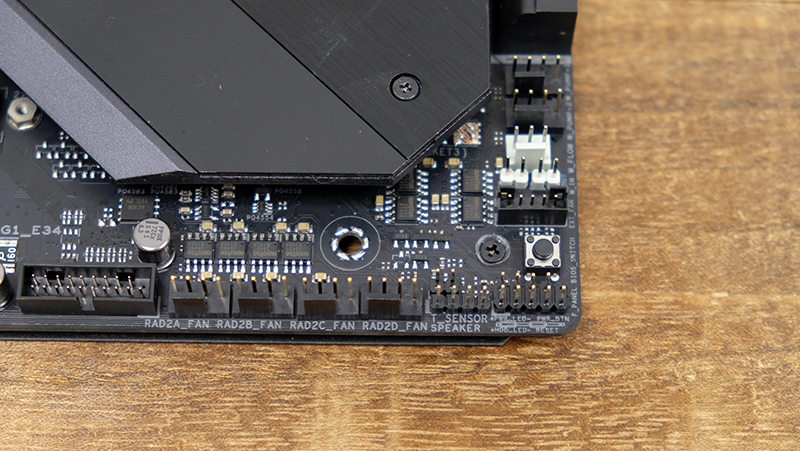 A debug LED is located next to the OC panel, but there’s also four LEDs – each one corresponds to the CPU, DRAM, VGA, and booting devices – that will light up when an error occurs in their respective components. The latter provides an easier way to troubleshoot than looking up the error code in the manual, so I can see it coming in handy.

There are a total of 12 4-pin fan headers, which should be enough for most custom liquid-cooling setups. However, the CPU_OPT header is sandwiched between the VRM heatsink and the CPU_FAN header, and there doesn’t seem to be enough clearance for you to hook up a fan to it. Instead, I was forced to utilize the CPU_FAN header for my AIO pump. 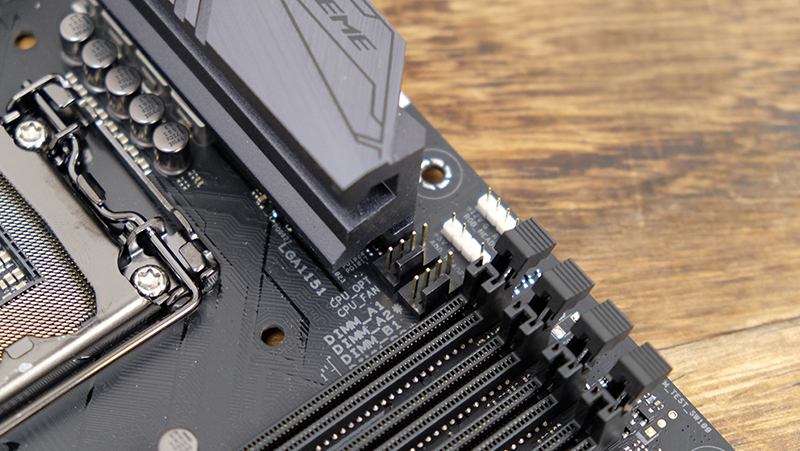 This isn’t a super big problem as the CPU_FAN header works as well, but it sure is annoying to have one header rendered useless because of the cramped design.

Elsewhere, you also get dedicated connectors for connecting sensors to monitor the temperature and flow rate of your liquid cooling system. There’s even a water block connector for monitoring the temperature, flow rate, and water leak signals of third-party water blocks.

ASUS has dispensed with the so-called armor covering the PCB that’s found on its Code and Formula boards, probably because of the Extreme’s focus on extreme overclocking. You’d have to remove them anyway, and that might explain why the metal backplate on the rear only covers half the board. Still, it does add a welcome bit of structural reinforcement.

That doesn’t mean that the Extreme isn’t visually striking though. The PCH heatsink and I/O shroud glow bright with LEDs, and there’s a subtle underglow on the board’s right edge as well. In addition, the LiveDash OLED display on the I/O shroud is a pretty unique feature that can display things like CPU temperature and clock speeds or even custom graphics. If you’d still like to add more flair to your rig, there are two 4-pin Aura RGB headers and two 3-pin addressable headers for third-party LED strips.

When it comes to storage expansion options, there are just two M.2 sockets. These are hidden underneath the PCH heatsink. They’ll take a bit more work to install, but it does give the board a cleaner look overall once you’re done. Only one of them supports SATA drives though, but they’ll both work with PCIe SSDs. 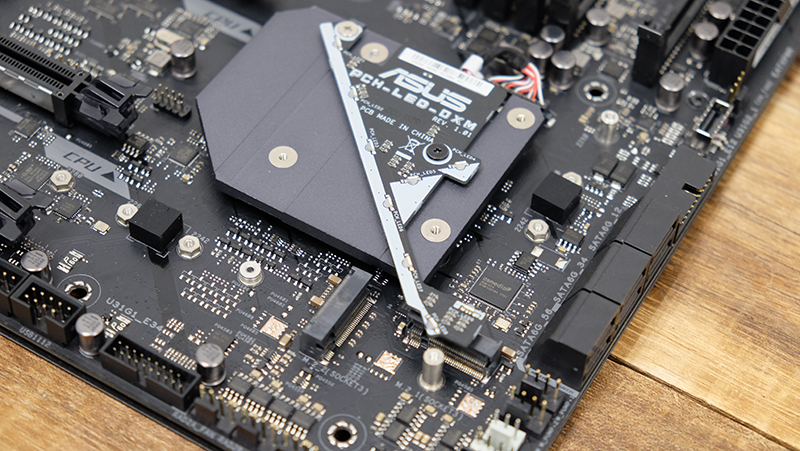 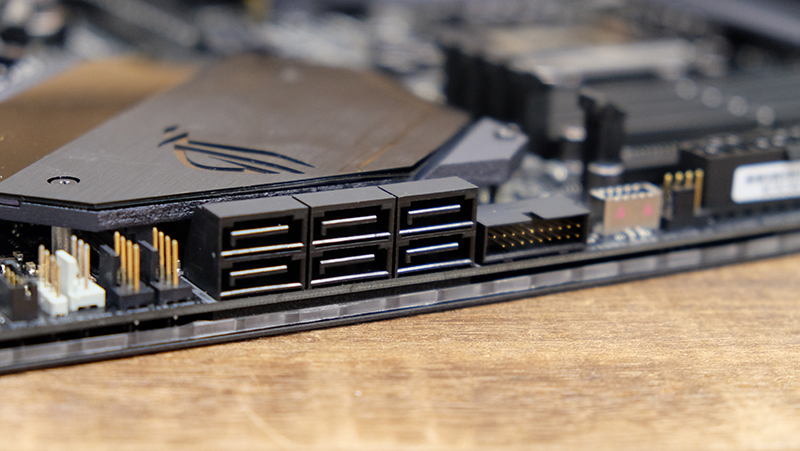 Should you still want extra M.2 sockets, ASUS has a DIMM.2 slot beside the RAM slots that will take ASUS’ DIMM.2 expansion card. This holds two more PCIe M.2 drives, and it’ll support SSDs up to 110mm long. However, if you do choose to make use of this option, the topmost PCIe 3.0 x16 slot will run in x8 mode only. 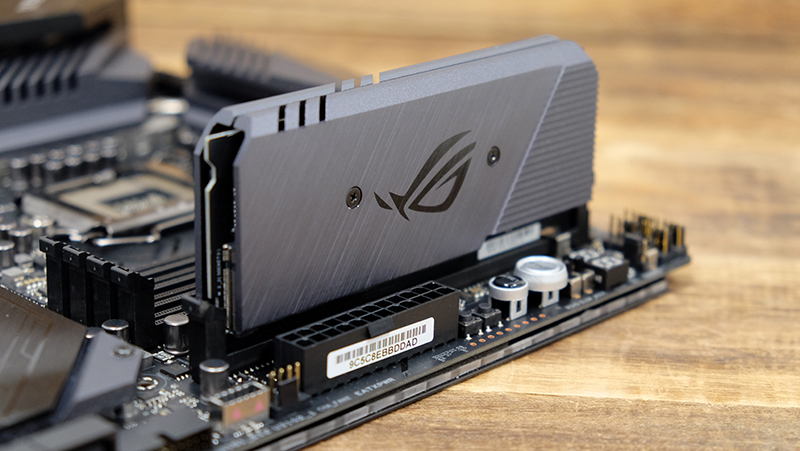 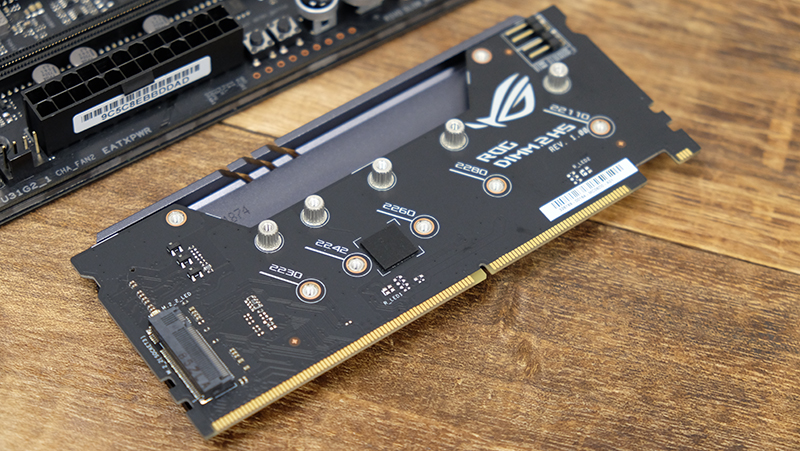 There’s a rich selection of high-speed USB ports at the rear, including one USB 3.1 (Gen 2) Type-C, three USB 3.1 (Gen 2) Type-A, and six USB 3.1 (Gen 1) Type-A connectors. The pre-mounted I/O shield also makes an appearance again, and really helps give the board a more robust appearance and simplifies the installation process. ASUS has included dedicated buttons for clearing CMOS and flashing the BIOS at the rear as well, and it’s nice to see key functions like these within easy reach. 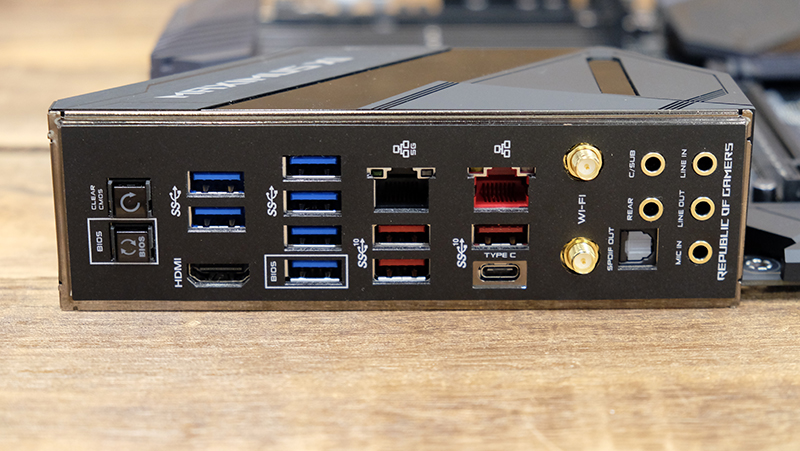 The Maximus XI Extreme is equipped with two LAN ports, comprising one Intel I219-V Gigabit LAN and an Aquantia AQC111C 5G port. It’s a little disappointing that there’s no 10G connector, but most users aren’t going to miss it anyway. In addition, there’s Wi-Fi built-in, courtesy of an Intel Wireless-AC 9560 chip that supports a maximum throughput of up to 1,733Mbps and MU-MIMO.

The onboard audio solution has been beefed-up as well, featuring the SupremeFX S1220 codec and an ESS ES9023P DAC. The front panel output is also driven by dual op amps, so you'll be able to power fairly high-impedance headphones from the front headphone jack as well. ASUS also went with Nichicon capacitors, which supposedly produce warmer and more natural sound. 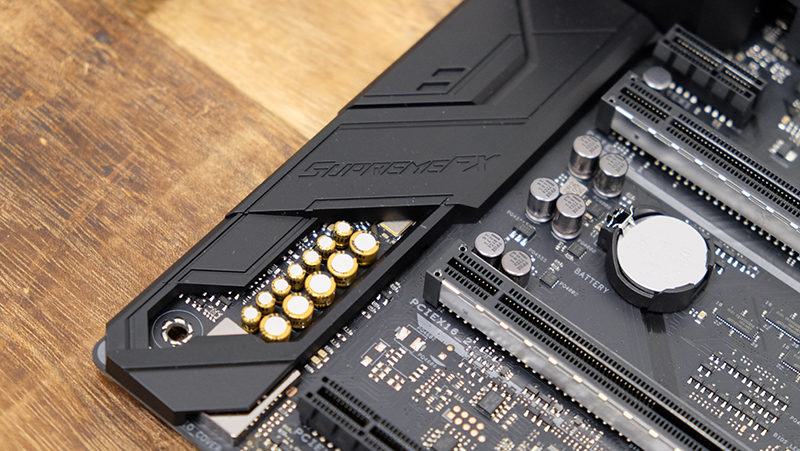