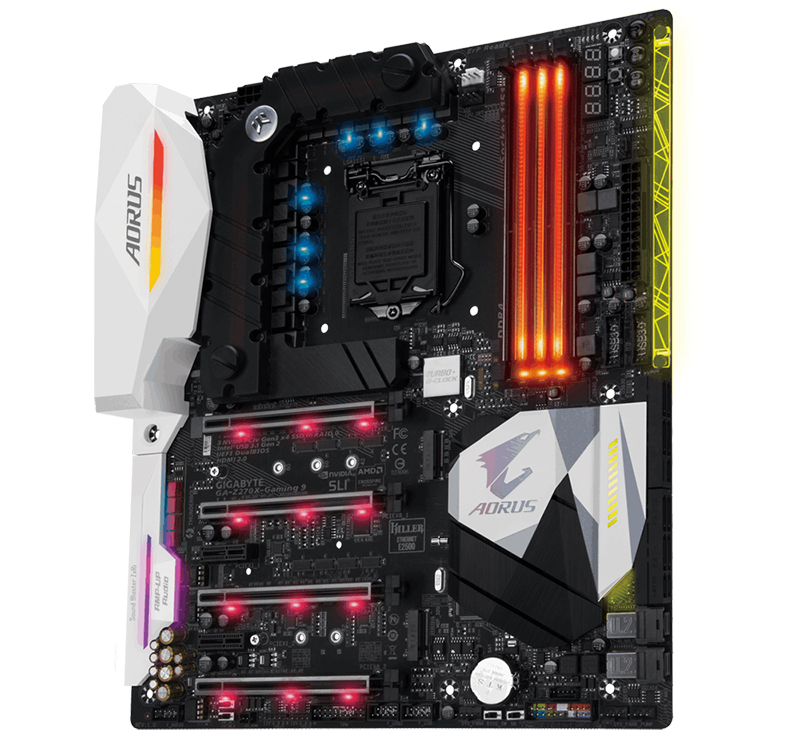 As far as flagship boards go, the Gigabyte Aorus Z270X Gaming 9 is crammed with just about any feature you need, and then some.

The result is a prohibitive S$855 price tag that will likely scare away all but the most serious enthusiasts. Gigabyte has cranked the knob up to 11 in all the key areas such as storage connectivity, networking, and overclocking.

It boasts a whopping 22-phase voltage regulator for high overclocks, but we should note that we had to set the CPU vCore load-line calibration (LLC) to Extreme in order to get the most out of the board. LLC helps to combat Vdroop, which is when the CPU vCore drops as load increases. This setting thus minimizes the gap between the CPU voltage at idle and load, and applies additional voltage to the CPU to improve vCore stability under load. 16 of the 22 phases are dedicated to the CPU vCore, comprising 8 true phases doubled to 16. Like the ASUS board, it also comes with a built-in EK copper water block with G1/4-inch threaded fittings that cools the VRMs and the PEX 8747 chip. However, this is an EK G-Frost Hybrid block, and the design is different from the one on the ROG Maximus IX Formula. Instead of micro fins to increase the surface area, it relies on two large copper channels for that. There’s support for up to 4-way SLI/CrossFire as well, courtesy of a PEX 8747 lane switcher. However, as with the ASRock board, this is more a nice-to-have feature rather than a truly useful one, as there are few users who will opt for that many cards.

There are a total of four PCIe 3.0 x16 slots and two PCIe 2.0 x1 slots, and all four of the x16 slots have been reinforced with metal, as have the RAM slots. Clearly, Gigabyte is fully prepared for you to utilize all four PCIe slots, even if that situation never materializes. 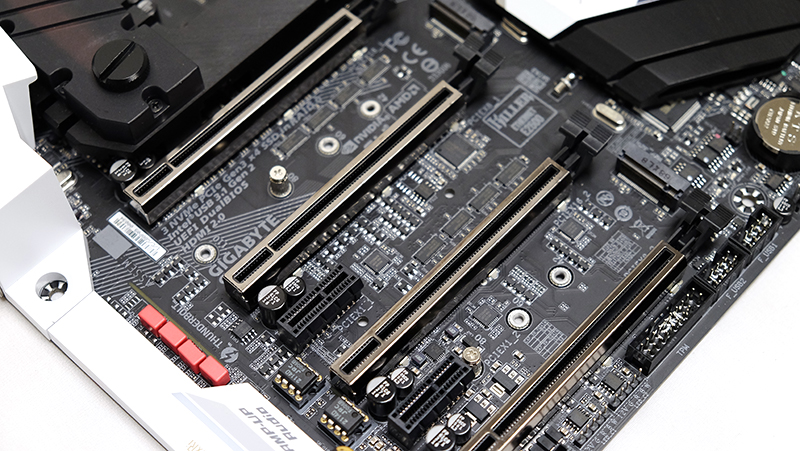 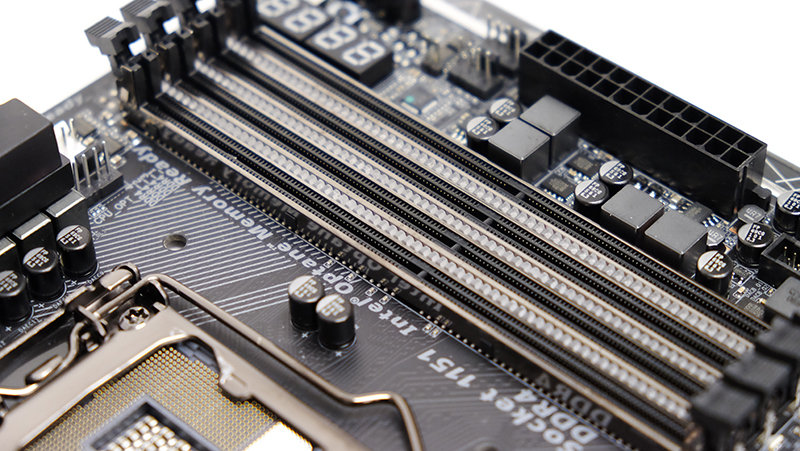 In addition, you get eight SATA 6Gbps connectors (six from the Z270 chipset, two from the ASMedia ASM1061 controller), three SATA Express connectors, two M.2 sockets (both SATA and PCIe supported), and two U.2 ports. The latter are really an above and beyond inclusion on Gigabyte’s part, as most boards don’t even have one U.2 port. That said, it looks like Gigabyte wanted to have an airtight case for not missing out on anything.

Of course, there’s a web of bandwidth sharing among all these ports, so you won’t be able to populate them all at once. A lot of this is dependent on whether or not the M.2 sockets are populated, and the type of device installed. For example, the topmost M.2 socket shares bandwidth with two other SATA ports, while the bottom one is linked to one U.2 connector and one other SATA port. As a result, installing a PCIe SSD in the first M.2 socket would end up disabling two SATA ports.

On the networking front, the motherboard packs three Killer Network controllers – two Killer E2500 Gigabit Ethernet and one Killer Wireless-AC 1535 – that work together to prioritize and assign the most demanding data packets to the lowest latency connection. This solution, dubbed Killer DoubleShot-X3 Pro, supports a maximum theoretical throughput of up to 2,867Mbps, but you'd require three different sources, which can be quite a stretch.

The Killer Wireless-AC 1535 Wi-Fi adapter supports 2x2 MU-MIMO as well, good news if you have a MU-MIMO router and other MU-MIMO devices in the home. 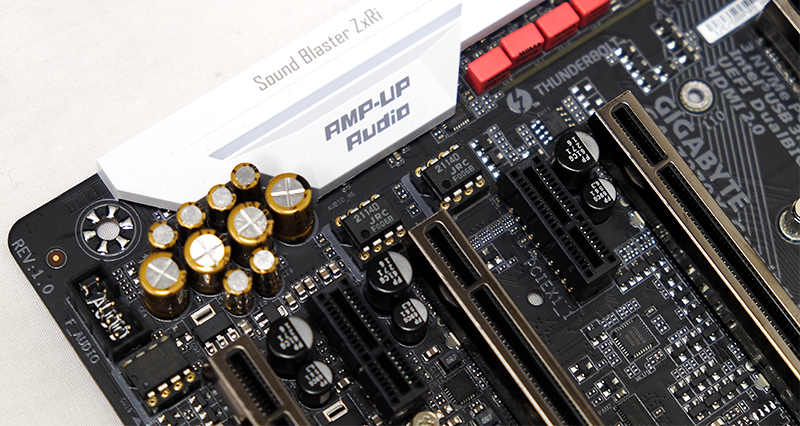 One particularly useful feature is the two LED panels that, other than showing you the debug codes, can be programmed to display status readings such as CPU temperature. Finally, there are plenty of LED customization options for you to trick out the motherboard with. This includes six independent lighting zones, including the I/O cover, the audio circuitry, the VRM heatsinks, and the PCIe slots. A transparent patterned overlay sits over some LEDs along the right edge, and this can be replaced with a different pattern to suit your taste (you can design and print your own if you have a 3D printer).

If you want to make your system even brighter, you can also hook up external LED strips to the two onboard 5050 headers. For still more lights, Gigabyte's RGB Fusion software will work with Corsair's new illuminated Vengeance RGB RAM modules, and you can synchronize the memory with the rest of the motherboard's lighting effects.

However, all of this comes with a slight size penalty, and the Gaming 9 is just over a centimeter wider than standard ATX boards. Still, it should fit in most ATX cases and requires just the same nine standoffs.