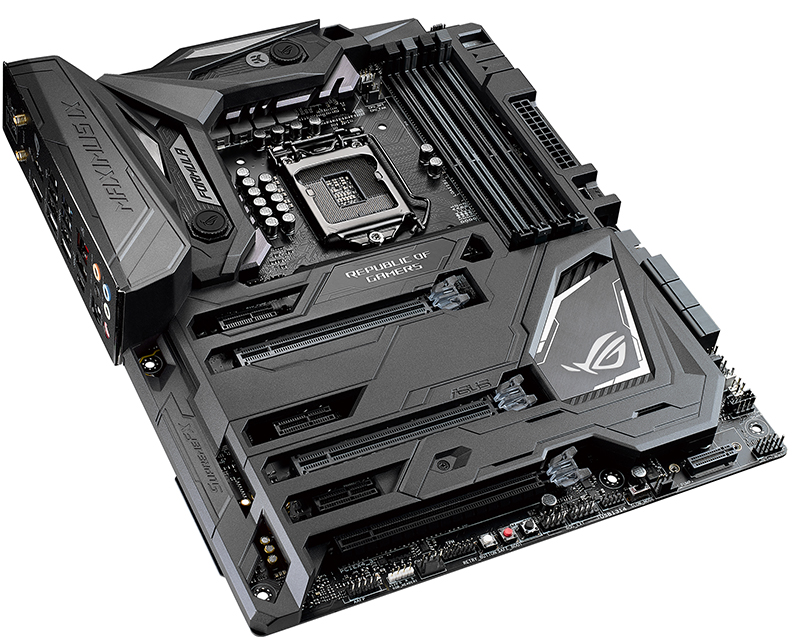 The ASUS ROG Maximus IX Formula is a board that stands out immediately because of its good stealthy looks. Exposed PCB? No, this is a board covered with a laser-etched plastic armor plating and a heavy-duty metal backplate that keeps dust off the delicate components and adds structural rigidity. The board even supports 3D-printed parts for an added degree of personalization, and if you happen to have a 3D printer on hand, you'll be able to make things like custom name plates, cable combs and covers, and even SLI bridge covers. 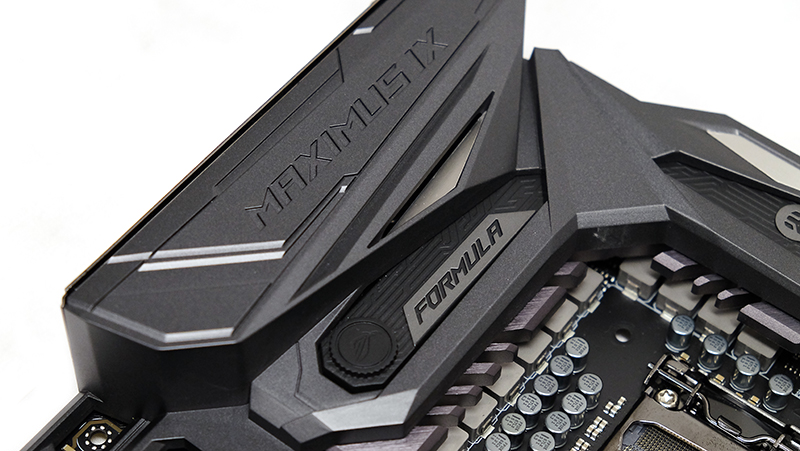 Fortunately, there’s substance behind its outward appeal, and the Formula is bristling with a wide array of connectivity options and overclocking-oriented features.

It utilizes an 8-phase power design (actually 4 phases, but doubled), with an additional two phases dedicated to the iGPU and another two for the DRAM. While that may not appear to be the most impressive configuration here, you’ll see later in the overclocking results that the quality of implementation matters more than the number of phases. 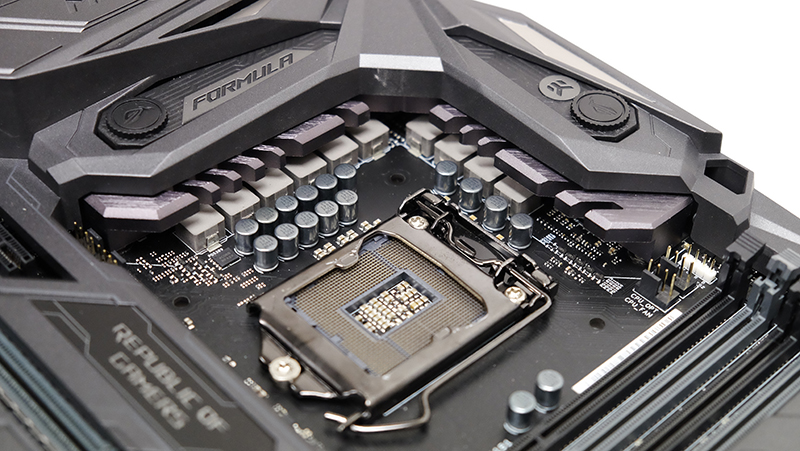 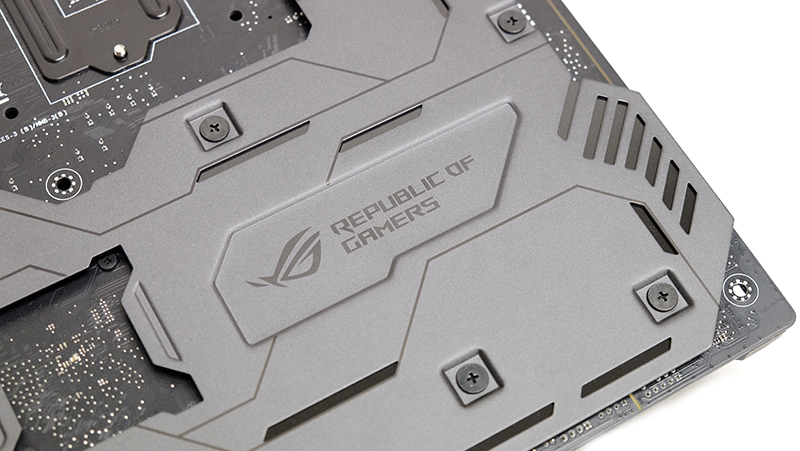 But if there's one thing we're disappointed about, it's the lack of dual BIOS. This is a board with Safe Boot and ReTry buttons, and a Slow Mode switch for LN2 overclockers, and a second backup BIOS would have provided additional peace of mind, especially given its S$679 price.

Still, ASUS intended for this board to be used in a variety of high-end setups, including those featuring custom liquid-cooling loops, which is why there are plenty of extras dedicated to making life easier for the latter subset of users. A built-in CrossChill EK II VRM block sits between the heatsinks, and the pair of G1/4-inch ports will work with most liquid-cooling fittings. The water block itself features a new and improved design compared to that on the Maximus VIII Formula, and it now utilizes thin, micro fins instead of large channels to increase the flow rate and maximize the contact area. In fact, ASUS is claiming 4°C improvement over the previous design. 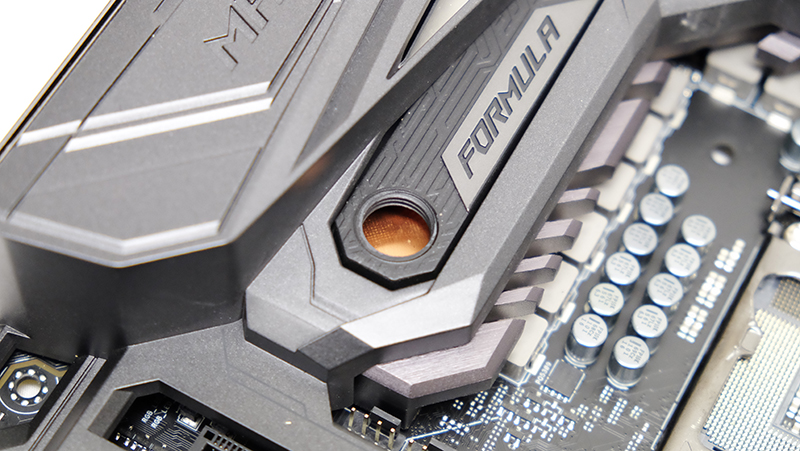 On top of that, there is a dedicated water cooling zone on the bottom right of the board with headers for monitoring the performance of your custom loop. This includes W_IN and W_OUT T-sensors for monitoring temperatures at the input/output of any block using external sensors, and a W_FLOW tachometer header that connects to a pump to constantly monitor the flow rate of the entire loop. 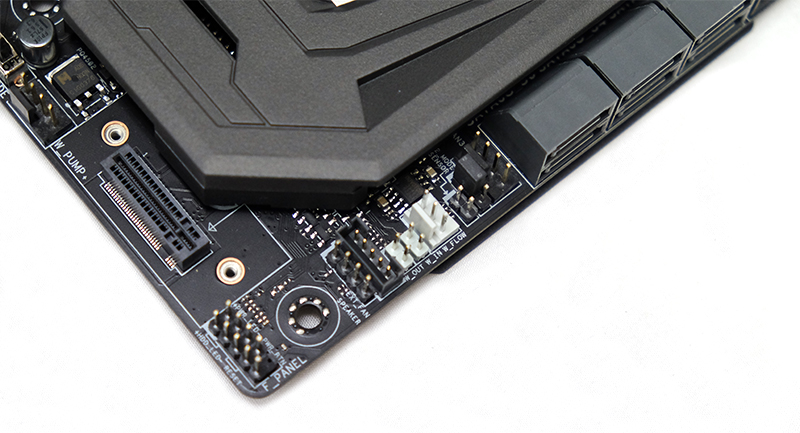 To further cater to the performance crowd, the board also boasts things like dedicated water pump headers, dual CPU fan headers for high-end air-coolers, and even a high amp (3A for a PWM fan, 1A for a DC fan) fan header. As it turns out, there are two different water pump headers – the 3A W_PUMP+ header for the higher powered pumps used in custom loops, and an AIO_PUMP for AIO units.

Clearly, ASUS wanted to make the installation process as convenient as possible, and that’s carried over into details like giving all fan headers automatic PWM/DC detection. In addition, the I/O shield is integrated with the board, so you only need to install the frame into your chassis first.

There are also value-added features like a USB 3.1 (Gen 2) front header for 10Gbps transfer speeds via compatible ports at the front of the chassis. Although there are already cases from In-Win that support it, this isn’t too common a feature yet, so it is more a matter of future-proofing than actual utility. 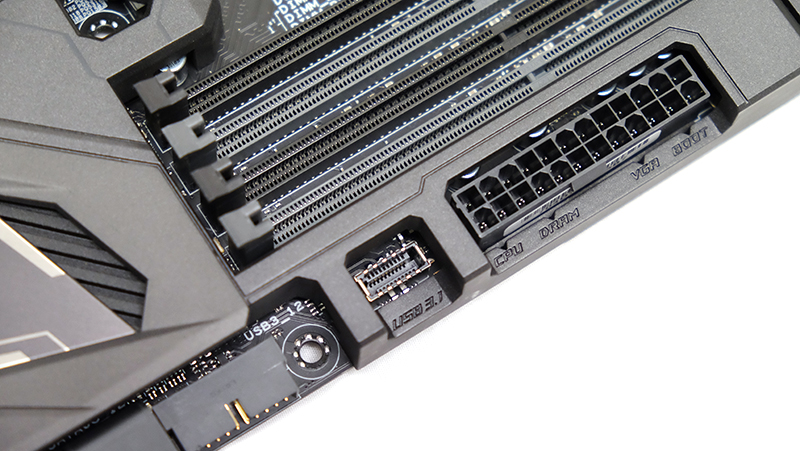 Two of the three PCIe 3.0 x16 slots have been reinforced with metal and extra soldering points to withstand the weight of heavy GPUs like the slew of 2.5-slot custom NVIDIA GeForce GTX 1080 Ti cards. There is only support for up to 2-way SLI/3-way CrossFire, but it is only a small subset of users who will miss a PCIe lane switcher for 4-way setups.

That aside, the board has quite a standard selection of storage connectors. There are no U.2 ports, and you'll find just six SATA 6Gbps ports from the PCH and two M.2 sockets. Of the two, only one supports both PCIe and SATA drives, while the other is PCIe-only. The former sits below a plastic cover that's held in place by a single screw, and it's located relatively far away from where a heat-generating GPU would be. 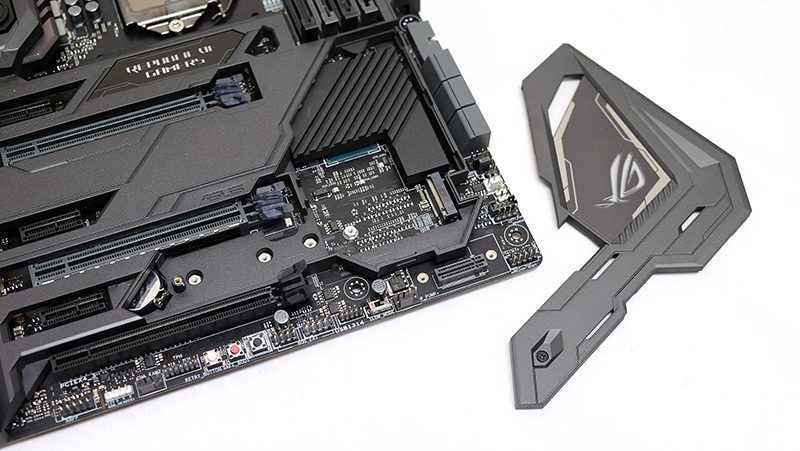 The other is a vertically-oriented socket that would require the SSD to stick out from the board, which may not appeal to you. The ROG Maximus IX Formula has enough connectors for the vast majority of users, but if you're hoping to use multiple M.2 drives, it's implementation is not necessarily the best.

On the networking front, you won't find things like dual Gigabit LAN ports that support teaming. Instead, there is just a single Gigabit Ethernet port powered by an Intel I219-V controller, while Wi-Fi is handled by ASUS' own QCNFA364A wireless card. The latter uses a 2x2 array and supports MU-MIMO, with a maximum throughput of up to 867Mbps.

However, while the lack of teaming may appear to set the board back on paper, we'd argue that a single high-speed connection is often still better than whatever benefits teaming is supposed to bring, and it's often more trouble than it's worth.

Another point that bears mentioning is the upgraded back and front panel audio solution with the new SupremeFX ALC S1220 codec. This enables cleaner audio signals, and there’s even a ESS Hi-Fi Sabre DAC, a de-pop MOSFET that minimizes popping noises, and left/right channel separation.

The finishing touches are the numerous LEDs located on the VRM heatsink, under the power and reset buttons, the PCIe slot clips, and the PCH heatsink. These can be customized using ASUS' Aura Sync software and synced with compatible ROG graphics cards and peripherals. There are also two 5050 RGB strip headers located at the top and bottom of the board, so you'll be able to add in third-party LED strips and control all aspects of your system's lighting using the same software. And to cap things off, you'll find a debug LED and power and reset buttons on the top right. 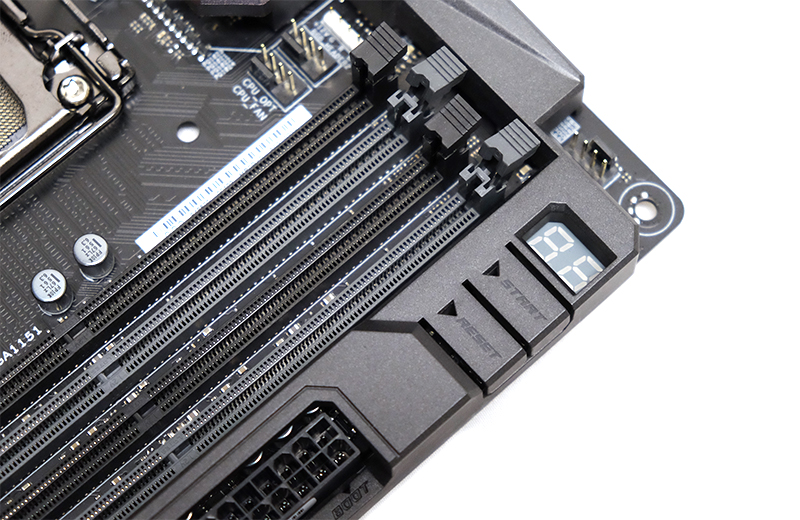