That's right folks, NVIDIA's SLI is soon to be available on an Intel chipset platform - the last bit of official news we grabbed before departing from NVISION'08. Deputy Editior, Zachary Chan of our sister GameAxis publication was there to cover the event, but it wasn't just all games down there.

Just to set the record straight, NVISION is about growing the industry of visual computing, pulling together all the industries that rely, use, or develop anything in related to visual/graphics computing. There is certainly a large, growing industry and a lot of people rely on visual computing today in one way or another. Hosted by NVIDIA and sponsored by several large banner names including HP and Microsoft, there was a great deal of technology developments and industry progression shared by various participants in this three-day long event.

But in this article, our focus is on the consumer computing technology developments and one of the key takeaway points is the Intel's upcoming X58 chipset (Tylersburg) for Bloomfield processors (Nehalem architecture), will natively support SLI. So how's that possible?

Realistically speaking, such support is possible in many more of our mainstream chipsets; ASRock has showed us before how they've done that before, so it's certainly no secret. Licensing and support agreements are the key requirements between NVIDIA and Intel to make that happen. After all, ATI's CrossFire technology meant for ATI's chipsets initially, have very soon picked up support by most performance and enthusiast Intel chipsets. In fact, Intel's workstation class motherboards like those of the i5000X and i5400 series support SLI and CrossFire as the graphics drivers don't have any restrictions on them - presumably to better enable sales of more workstation graphics cards where profits made are higher. 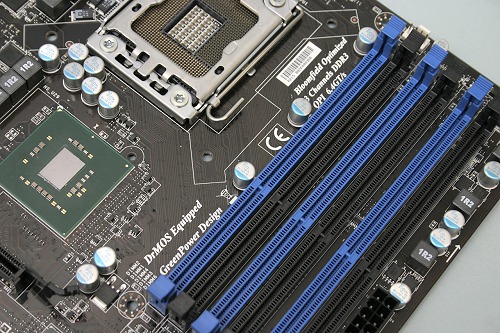 Likewise, the Intel X58 chipset for Bloomfield processors are initially going to be out for the workstation market and once again these will support SLI natively - but with a catch this time round. SLI support is only applicable to motherboard OEM/ODM folks whose Intel X58 motherboards have passed NVIDIA's certification process, for which NVIDIA will issue a special code string (or otherwise known as a token) to the motherboard OEM/ODMs to reprogram the board's system BIOS and enable SLI support. The difference whether a board supports SLI or not will as usual be identified by the graphics card drivers.

Though NVIDIA understands that bypassing this to crack the code would be an easy affair, their certification program is mainly to gauge OEM/ODM support for their initiatives. This support will be available for time-to-market of Intel X58 motherboard launch, which is expected to be sometime during the November timeframe.

Since the Intel X58 chipset support has enough PCIe lanes for two full PCIe 2.0 x16 interfaces which can be split-up further if required, here are formally support SLI configurations for boards that pass SLI certification:- 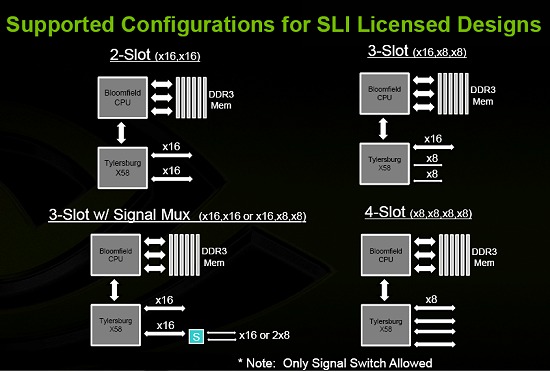 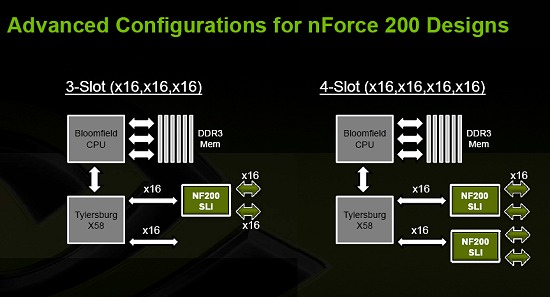 For almost all games, the difference between PCIe x8 and x16 interfaces are very minimal and thus this 'elite' configuration is just an overkill. Games are not yet bandwidth limited. However, this could be vastly different when talking about CUDA processing on the GPUs where there would likely be more significant I/O demands for such workloads.

While what we've discussed so far is native SLI support on the Intel X58 chipsets, we queried them a little more for chipset plans for Bloomfield processors and the their official answer is that NVIDIA doesn't have plans to do an Intel compatible QPI interface compliant chipset. Whether this infers to any licensing issues, we'll not know, but they claim it's nothing to do with that and have other good (undisclosed) reasons. However, they did acknowledge continued commitment to making chipsets compatible with Intel's DMI interface, which is commonly used by Intel for their Southbridge chipset interconnect. This of course implies that they intend to still stick around the chipset business and supply chipsets that are somewhat akin to the AMD platform, where they mostly supply MCP chips.

So that wraps up our important hardware update from NVIDIA's NVISION'08 in USA, but head over to GameAxis to check on the more fun side of things we saw at the event.