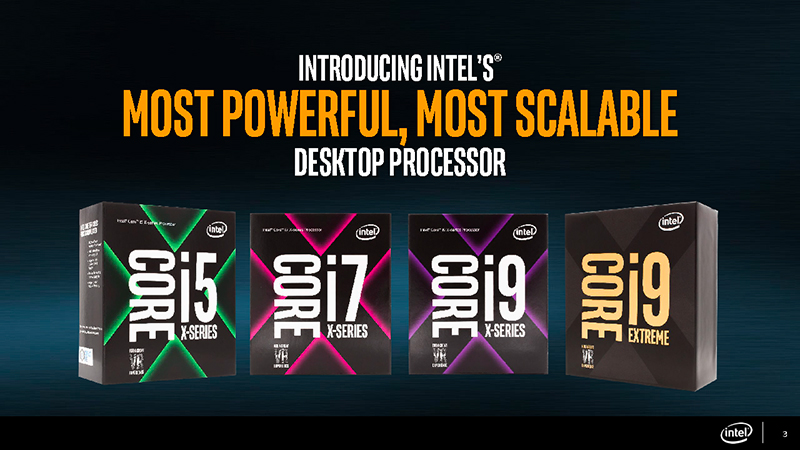 Updated on 8 August 2017: Intel has revealed the specifications for the rest of its Core i9 family. The table has been updated with the new information.

AMD made its plans for its own high-end desktop (HEDT) platform known a couple of weeks ago when it announced its 16-core/32-thread Threadripper processor, but Intel was ready today with a quick riposte. The company announced a brand new family of Core X processors, including new Core i9 chips that range from 12 to a whopping 18 cores.

Going hand-in-hand with the Core X CPUs is Intel’s new X299 chipset, the successor to the over 2-year-old X99 platform. All the new processors are based on X299 and use Intel’s LGA 2066 socket, and we’ve already seen motherboards from various manufacturers using the new chipset.

The Core X CPUs are targeted unabashedly at power users like Twitch streamers, video editors, and content creators, but they also offer more affordable quad-core Core i5 and Core i7 models for users who want a taste of the high-end but can’t quite shell out for the flagship Core i9 series. 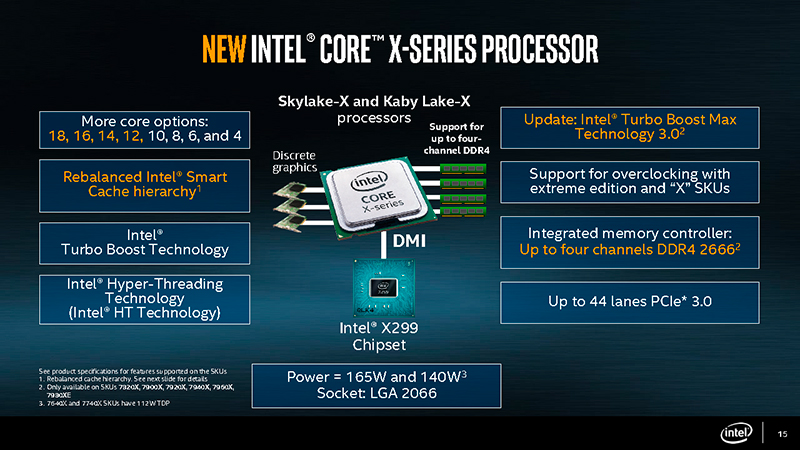 Intel’s HEDT chips have always been more about bragging rights than actual utility, seeing as few people are really able to take full advantage of them, but the new quad-core models mean that they’re now more practical and accessible for regular folks.

The new processors can be divided into two segments – Kaby Lake-X and Skylake-X. The former comprise the so-called low-end of the Core X family, and include the aforementioned quad-core Core i5-7640X and Core i7-7740X.

These chips are very similar to the current Kaby Lake processors on the market, and offer just dual-channel memory and 16 PCIe lanes from the CPU. However, they do have a higher TDP of 112 watts, compared to the 91 watts of non-X parts, and use Intel’s LGA 2066 socket.

But what’s interesting is the price, and the Core i7-7740X costs US$339, the same as the mainstream Core i7-7700K. This is the most attractive an Intel HEDT chip has been for a while, putting it within the reach of far more consumers. 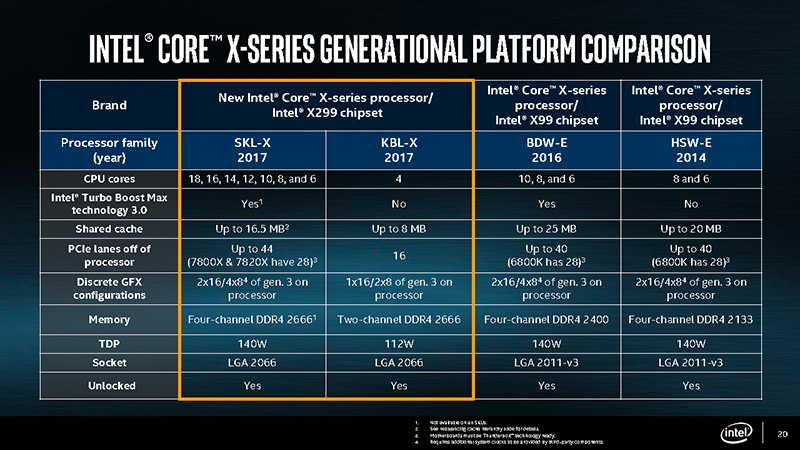 It also opens up tantalizing upgrade options down the road, as you could first buy the US$242 Core i5-7640X and stand to net a huge performance boost with a later upgrade. To be sure, an X299 motherboard is likely to be more expensive than its Z270 counterpart, but someone considering a mainstream Core i5 or i7 processor could now also think about stepping up to X299 and Kaby Lake-X without stretching their budget by an unreasonable amount.

The Skylake-X chips sit higher up the price tier, and unlike their Kaby Lake-X counterparts, do not share much in common with the mainstream Skylake processors. Instead, they’re a desktop version of the Skylake-SP core that will be used in the next-generation Xeon chips.

One new feature on Skylake-X is an enhanced version of the Turbo Boost Max 3.0 technology that Intel introduced on its Broadwell-E processors. Turbo Boost Max 3.0 let Broadwell-E identify which core in the processor supported the highest clocks and then boosted that core in single-threaded workloads, thus helping the chip keep up with processors with fewer cores but higher clocks in single-threaded applications like games.

Now, Skylake-X allows that to happen for two cores, so users can take advantage of a two-core boost instead of just a single-core one.

In addition, Intel made Turbo Boost Max 3.0 a lot easier to use. The first iteration of the technology required you to jump through several hoops before you could take advantage of it. You'd need a motherboard that supported it, for starters. And then you'd have to download the driver and then manually select which programs you wanted it to apply to (or simply have it apply to any app running in the foreground).

Intel fixed this with Skylake-X by making the technology natively compatible with the Windows 10 Creators Update, so you don't have to download any additional drivers or software to make it work. It is ready to go from the moment you plug the chip in, which is great news.

On top of that, Intel made some changes to the cache topology in Skylake-X, which accounts for the smaller L3 cache size compared to Broadwell-E chips. In a nutshell, it now employs a smaller shared cache and larger private cache, as opposed to a large shared cache and small private cache from before, a switch that Intel says improves performance. Private caches generally have lower latencies than shared caches, and the larger private cache means that they have a higher hit rate – when the cache is accessed and the requested piece of data is found –  than on previous-generation CPUs.

However, the last level cache now uses a non-inclusive design, and it no longer contains data from the L1 and L2 caches. It only holds data that has been evicted from the private cache, so a core that wants to read the data in another core's cache will have to reach to the L2 cache now. 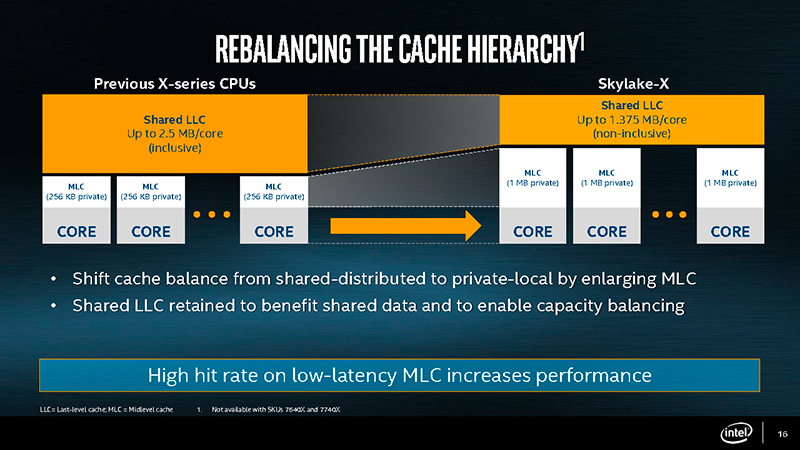 The most exciting Skylake-X chip is probably the Core i9-7980XE, which is the first consumer desktop chip to offer 18 cores and 36 threads and also the only one in the Core X family to bear the Extreme badge. Unfortunately, there's no detailed information on that chip yet, so things like its clock speeds, TDP, and the number of PCIe lanes is still up in the air.

That aside, one thing to note about the Skylake-X line-up is the feature segmentation. In typical Intel style, not all the processors will offer the full 44 PCIe 3.0 lanes, and the Core i7-7800X and Core i7-7820X give you just 28 lanes. In comparison, AMD has said that all its Threadripper CPUs will provide the same 64 lanes.  The Core i7-7800X also does not ship with Turbo Boost Max 3.0 and officially supports only DDR4-2400 memory, no doubt Intel's way of nudging enthusiasts further up the price ladder.

All things considered, that's a lot of chips to make sense of, and we've included a table here summarizing the known specifications and prices of Intel’s Core X family to help pull things together. Overall, it looks like Intel still intends to maintain its price premium over AMD (although the 10-core Core i9-7900X is now far more affordable than last year's Core i7-6950X) on the back of its IPC advantage.