To recap, as with all other Intel NUC units, they come in various base configurations (which includes a processor of your choice), but you'll need to outfit it with your own storage, memory and add-on cards as you see fit.

The NUC 9 Pro kit that Intel sent our way came equipped with the following specifications and we've also listed a configuration from HP that we are pitting against:-

We have not reviewed many Intel Xeon-powered systems before, at least not recently. But I picked out the HP Z2 Mini G4 for comparisons because like the NUC Kit, it is a similar small-form-factor mini computer that also comes with an NVIDIA Quadro graphics card – although it comes with an older 8th-Gen Intel Core i7 8700 processor. It’s also not hard to see how both are targeted at similar market segments; despite the Intel NUC providing more modularity. By the way, Xeon processors support error checking and correcting memory and so are more stable and less prone to data corruption due to memory errors, whereas most Core i7 processors do not. So for critical usage or scenarios, a Xeon based workstation will be more preferable than a consumer-class Core i7 processor-based one. 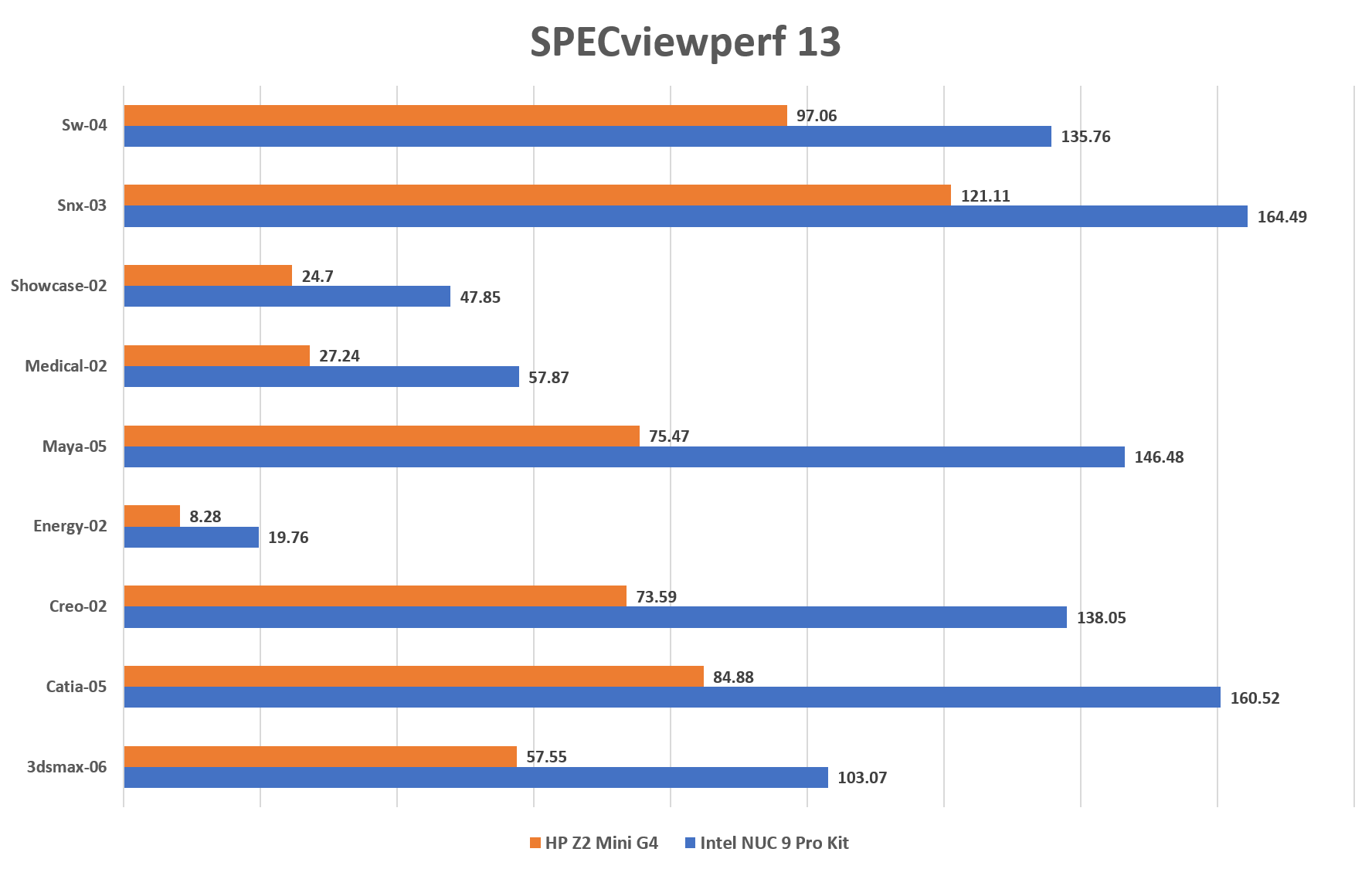 To evaluate the system’s performance, I ran SPECviewperf  13 benchmarks on it to see how it fares. For the uninitiated the benchmark is considered to be the worldwide standard for measuring graphics performance based on professional applications, running nine benchmarks that represent graphics content and behaviour from actual applications - including categories such as 3D Max, CATIA, Creo, Energy, Maya, Medical, Showcase, Siemens NX, and Solidworks. Unsurprisingly, the NUC 9 Pro with the better P2200 graphics card outclassed its competitor. 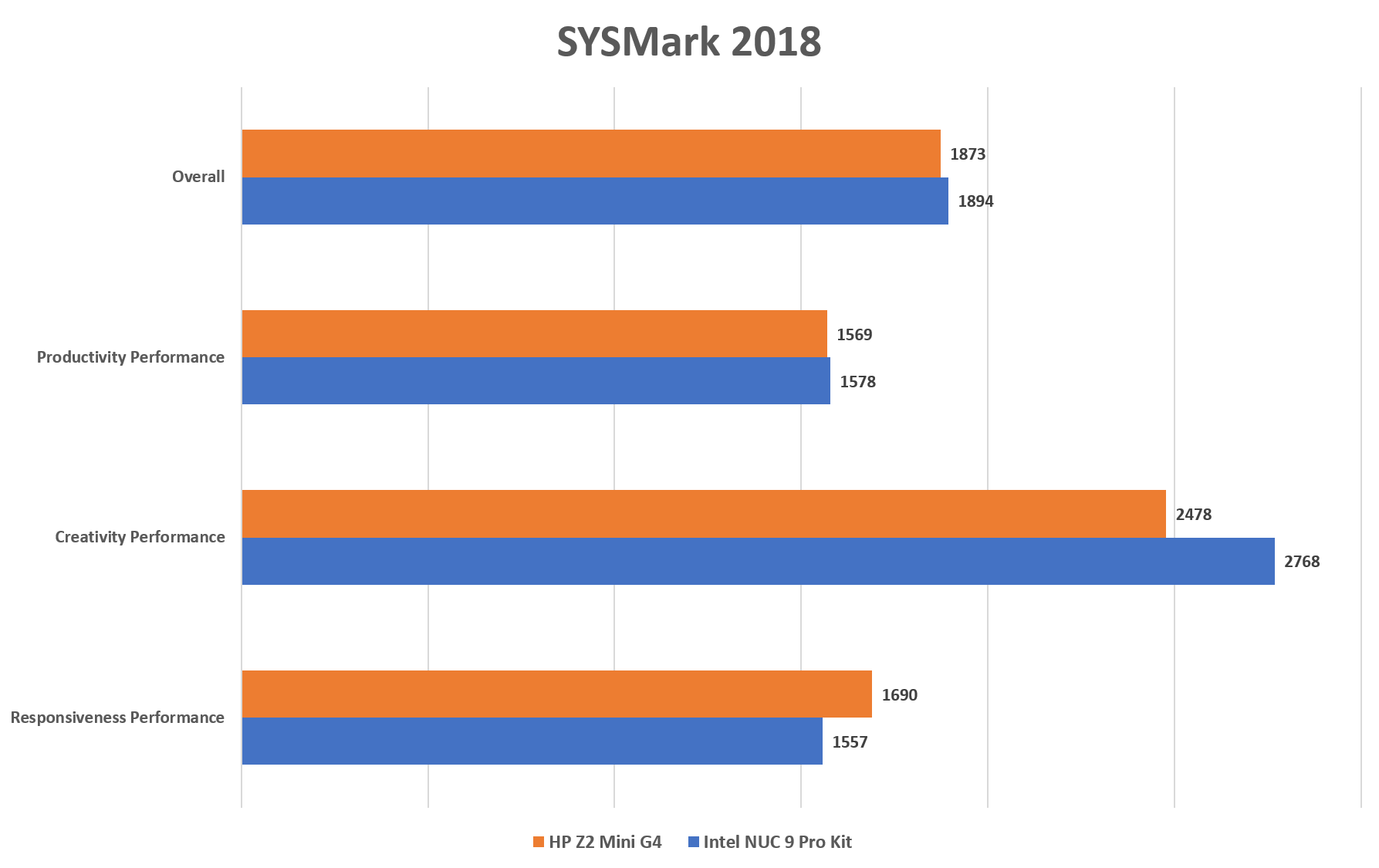 In our SYSMark 2018 tests, an application-based benchmark that reflects usage patterns of business users in the areas of Productivity, Creativity and Responsiveness. Unlike synthetic benchmarks, SYSMark runs real-world applications and workloads in real-time to measure the computer’s performance and comparing it with the HP Z2 Mini G4, the scores here fell in line with the processor-class used.

Throughout the benchmarking progress, the NUC Kit’s fans were surprisingly quiet even while under load. That’s not to say it’s utterly silent – its presence can still be heard on my desk – but by comparison, it is significantly quieter than my shalt-not-be-named gaming laptop, which has to run its fans faster and louder to compensate when running SYSMark 2018.

Thanks to its powerful components and generous I/O, the NUC 9 Pro is appealing to content creators such as video editors and digital artists. What the NUC Kit has shown that there isn’t necessarily a huge compromise to be made when it comes to a full-size desktop workstation versus an Intel’s mini form-factor here. It’s certainly not as fast nor as powerful as the former types, but if you’re looking for something of an in-between, say a footprint that occupies an even smaller area than a professional laptop like the ASUS ProArt StudioBook and yet just as if not more powerful, then the NUC 9 Pro is a very logical choice to go with.

Intel’s past NUC computers have prioritized size and power consumption over everything else, which made them impressively tiny machines that could be installed in a variety of unique applications – even mounted behind a TV or monitor. The NUC 9 is not that – this is what you get when Intel goes for broke on performance and it’s not a direct replacement for the older NUC systems. 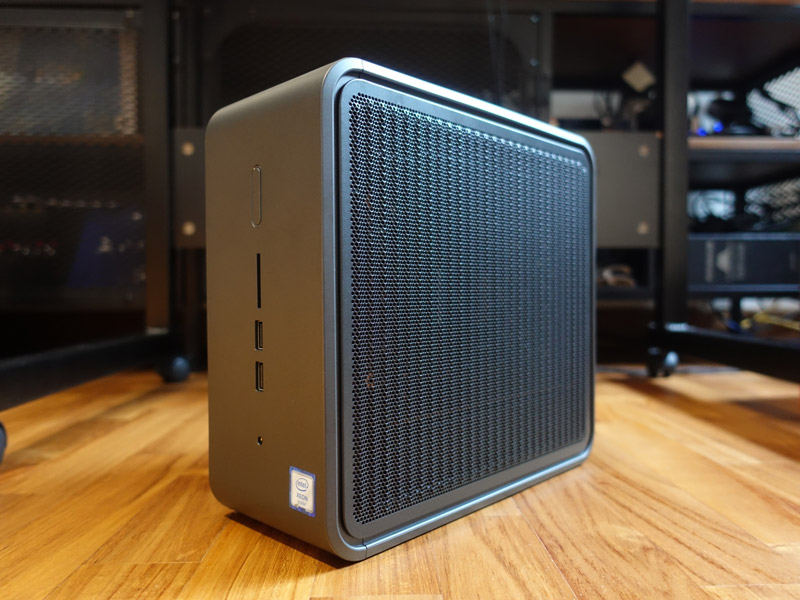 But what the NUC Kit (reminder note: the platform the NUC 9 Pro is built upon) has proven, is of Intel’s clever ideas on how to make PCs smaller, without giving up their performance or ability to upgrade components. In the end, the NUC Kit is an extremely flexible platform, and I can see many enterprises using it as a workstation for CAD/CAM, M&E, or other situations that require intense graphics or compute-intensive workloads. Experiential gamers could also use it as a mini game server or build a high-end mini gaming machine. It is expensive though. You can also find out more about the kits here if you're keen on building one.