Intel Next Generation Wireless N - Updates on the Wireless Frontier

According to Intel, they feel that Draft N is already at a pretty stable and matured stage since they've been working in the backgrounds with key AP vendors. Through the Connect with Centrino program, Intel is confident that the Draft N ecosystem is able to satisfy the levels of performance that is required from next generation WLAN networks. Because of this, and for the fact that there is an overwhelming demand for high bandwidth networks in the digital home environment, this is the most opportune moment to launch their next generation mobile wireless chipset. It seems far more likely that Intel sees the growing trend of high speed networking and putting their own stake to milk the cash cow.

The Connect with Centrino is program is not unexpected as well. Intel only makes wireless adapters, which is basically one half of the equation in any wireless network, so they have to make sure that their chipset is fully compatible with the major wireless N networks in the market. If you're wondering why Linksys, one of Intel's closest Centrino partners is not in the list of Connect with Centrino vendors, we've been told that this is only because Linksys is undergoing some restructuring of their marketing plans. We should expect to see Linksys certified in the next phases of Connect with Centrino.

There is actually a bigger picture to look at. The most important component of this launch isn't really the Wireless WiFi Link 4965AGN chipset, but the Connect with Centrino program. It doesn't really matter as much as to what was the driving force behind the program, but what it actually represents. Connect with Centrino promises to be a catalyst of sorts to drive a more unified wireless N ecosystem. Because of the additional testing and validation, Intel will create one of the widest interoperability base for any Draft N wireless network out there, even if it is centered around their own chipset compatibility. This will mean higher interoperability for current Draft 1.0 products, smoother transition and tighter support for the eventual Draft 2.0 upgrades and possibly well into 802.11n ratification.

Don't forget that being part of the WFA, Intel is bullish about getting 802.11n out the door as soon as possible. According to the official IEEE 802.11n Task Group work plan predictions (at time of writing), the standard is not due ratification and approval before October 2008. Intel's own estimations however, are far more optimistic. Mr. Chen shared Intel's time line with us, which shows that they expect Draft 2.0 to be finalized by March 2007, followed by Draft 3.0 within the June to September 2007 time frame and they are confident that IEEE will ratify 802.11n within this year as well. 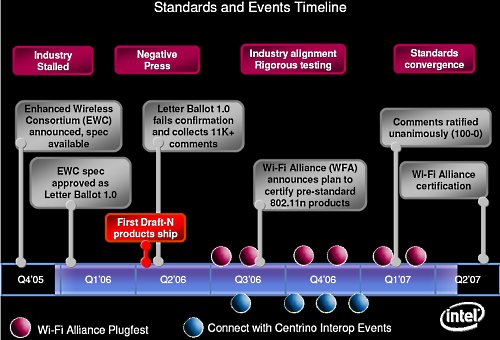 With compatibility out of the way, the other variable that remains is performance. All current Draft N products still work in the 2.4GHz band, which it is entirely too congested. Even with MIMO using multipath interference to its advantage, it is unable to offer the promised speeds on 802.11n. We didn't get real specifics from Intel, but they've grudgingly admitted that improvements still have to be made. They've been able to achieve 100-120Mbps throughput in mid-range tests (our own testing reveals similar numbers), which is good news for a home network. However, performance drops drastically at further ranges. Intel's own numbers for an interference free, line-of-sight environment, Draft N throughput with their Wireless WiFi Link 4965AGN chipset is around 19Mbps at 68m. A pretty good number, but remember that this is only within the most ideal of situations. 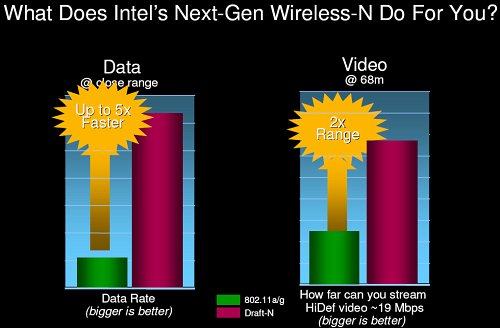 The industry will have to mature further to embrace migration to the congestion free 5GHz band, taking advantage of channel bonding and leaving 2.4GHz to legacy 802.11b/g. However, there is a counter-point to taking up the 5GHz band. Because radio wavelengths are shorter at 5GHz and have a weaker signal penetration, devices will be required to output higher powered signals to achieve the same range as 2.4GHz. Given the choice though, we'd rather sacrifice a little coverage range to have the promised bandwidth of an 802.11n network with low interference than suffer inconsistent performance and flaky connectivity within the 2.4GHz spectrum. You may still be able to maintain decent signal strength at 35m in a crowded office environment, but when throughput drops to an average of 5-6Mbps, it defeats the purpose of 802.11n.

Intel's Connect with Centrino is definitely a step forward in the right direction and with a giant like Intel pushing ahead, we might just be able to see a more stable next generation wireless ecosystem.