The second of Intel's three different sections, Tomorrow deals with tech that Intel has working and is already in the final (or near final stages of testing). The models we saw were just working prototypes and some of them didn't even have official model names yet but that doesn't diminish their potential one bit. 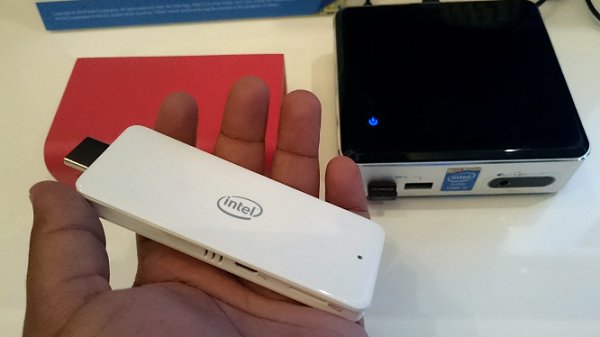 Intel's branding of their pint-sized powerhouse, the Next Unit of Computing (NUC), has been quite a success in a bid to change the mindset of both the enterprise and consumers that a PC doesn't have to be a big beige/black box anymore and PC engineering has come a long way to enable really small and power small form factor systems. While it has seen several iterations since the first edition of this palm-sized PC, Intel seems persistent to showcase that x86 computing is possible in a tremendously small form factor such as this new PC on a stick.

It's doesn't yet have a formal name and it may or may not be part of the NUC family, but what we do know is that it's running off an Intel Bay Trail-T SoC Intel Atom Z3000 processor. It will certainly have less muscle than a desktop/notebook oriented computing components outfitted in an NUC, but with ever more powerful mobility solutions, the Bay Trail-T SoC is more than sufficient to run everyday Windows tasks and then some more. This stick based system directly hooks to your monitor or TV via HDMI and draws power through USB. However, in its current form, USB 2.0 doesn't supply enough juice on its own and thus is powered by a USB power adapter. However, Intel was quick to point out that later variants will likely move on to support the new reversible USB Type-C connectors  (compatible with USB 3.1 standards), which will be able to supply enough power via USB alone.

This little stick PC has built-in Wi-Fi connectivity to interface with your wireless devices, an SD card reader and triple USB ports (one to connect for power, and another two for other uses). In essence, this is a full fledged plug-and-play PC. It's most certainly pocket-able and is definitely more compact than AMD's nano PC form factor.

Perhaps 7-11 or petrol kiosks might eventually stock this on their counters so that consumers can get their computing fix on the move just as easy as getting essentials like bread, biscuits or condoms. It's also targeted for uses such as digital signage and in any other cramped areas that needs the full power of a PC on a stick. Here's a few more photos of it and stay tuned for its availability sometime in the early part of 2015:- 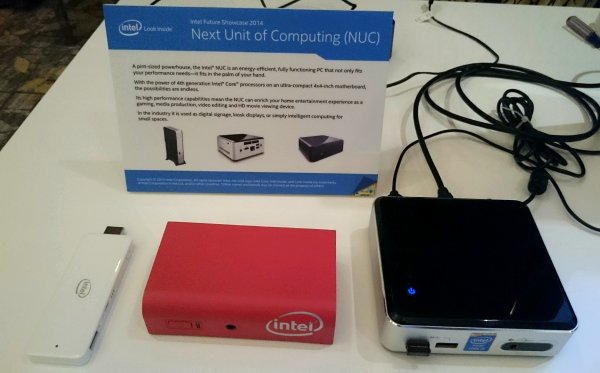 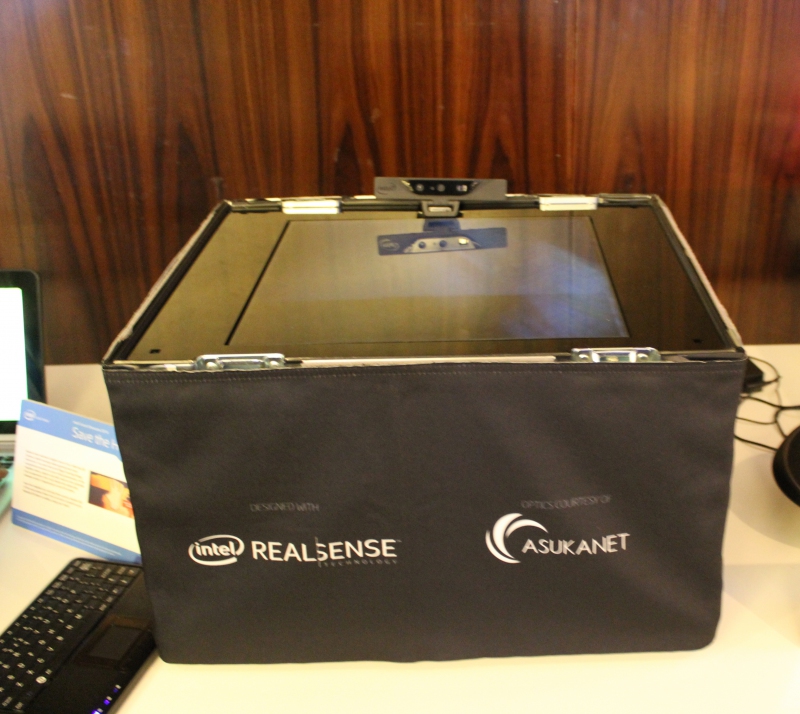 Remember when we told you about the Dell Smart Desk? The Floating Display is something like that but it's more of a display piece of tech instead of a desk. The prototype's big and bulky but it's already very impressive. It uses come reflections and special tech (including the new RealSense 3D cameras) to trick your eyes into seeing the display in 3D, but without the need for glasses, similar to what Nintendo did with the 3DS. What's impressive is that the camera reads your movements and then translates it into commands. In this prototype, the 3D image of your hands is superimposed over your real ones. You can literally manipulate the 3D object you're looking at like it's a real object. Movement is replicated 1:1, with zero input lag. 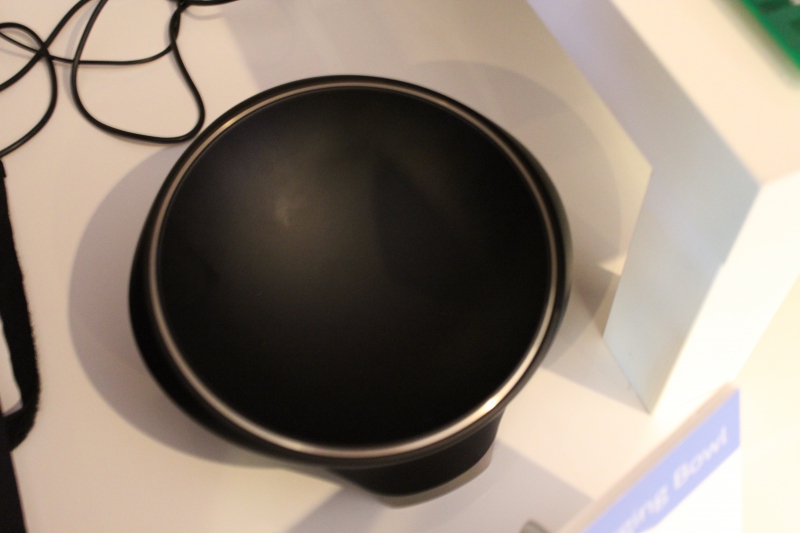 This is one of the things that causes you go 'Huh?' when you hear it but then makes perfect sense afterwards. In this case, it's a literal wireless charging bowl. using Rezence technology, the bowl will charge any compatible gadget that's placed into it without the need for wires. Previously, wireless charging were all 1:1, which means you have a single gadget that can be charged at a time for a single wireless charging base (or two or three if the base has specific slots). Intel's changed this by letting you charge as many objects as a time as you want. While the bowl is something that will see production in some shape or form in 2015, Intel also showed up with a bigger version of it.

The big version can charge through nearly any surface (except metal) and like the charging bowl, has no limits on how many devices it can charge. Right now, Intel is working with government agencies in trying to get permission to try out this tech at public places. So who knows, one day, you might just be standing in a charging area while waiting for a train or bus. The scavenger bot is an augmented reality app with potentially amazing real world application. Using a RealSense 3D camera, you can take a 3D snapshot of whatever you want. The snapshot will then be generated in 3D and you can navigate a teeny bot around. Impressive isn't it? Now imagine this being used to rescue trapped survivors after an earthquake. Strap a camera onto a remote vehicle, and then record the area in 3D to see what's going on under ruined buildings. Or say you get into an accident and need proof of the severity of the damage. Snap a picture and you have a 3D image. The images you record with the RealSense 3D cameras can also be exported into design software. So if you're a budding 3D artist, you can pretty much forget about modelling most objects. You just need to take a picture of them and then you can manipulate them in 3D. 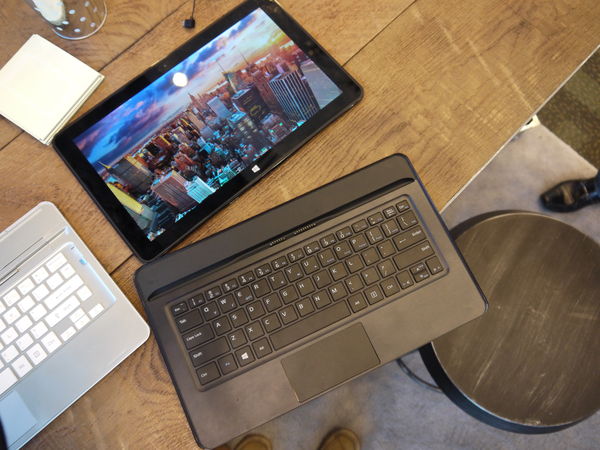 At first glance, the Llama Mountain looks similar to other transformable notebooks on the market now. But take a closer look and you'll find that the Llama Mountain is an engineering advancement over current 2-in-1 devices. First revealed at Computex 2014, we managed to get a closer look of this platform in this showcase. It's incredibly slim at just 7.2mm thin for the Intel Core M powered 12.5-inch convertible notebook. With a Quad HD (2,560 x 1,440 pixels resolution) display, it's complemented by an equally thin, detachable keyboard that also functions as a dock. By itself, the tablet portion weighs around 670 grams.  There's also a 10-inch version of the tablet and it's even lighter, weighing at a measly 550 grams and only 6.8mm thin! Naturally, these are fan-less designs that take advantage of the ultra low power characteristics of the new Intel Core M processors that power the bulk of these devices. You'll likely hear more of these new slim-line products at the CES 2015 expo in January, so stay tuned!