Based on an Atom-like processing core, the EP80579 Integrated Processor family combines the traditional platform elements such as incorporating a memory controller hub, I/O controller hub and even has an FSB attached FPGA hardware modules on certain variants which Intel dubs as their QuickAssist Technology. The latter is feature that Intel can rely upon to deploy their processors in various applications instead of developing specialized processors for each application specific requirement or relying on the general processing core which would otherwise not have been speedy enough to process the required algorithms. Some uses of the QuickAssist Technology are to accelerate security processing and signals processing among others. 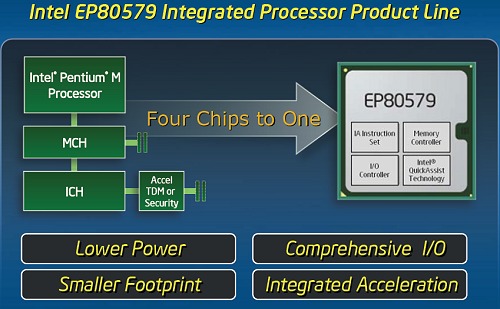 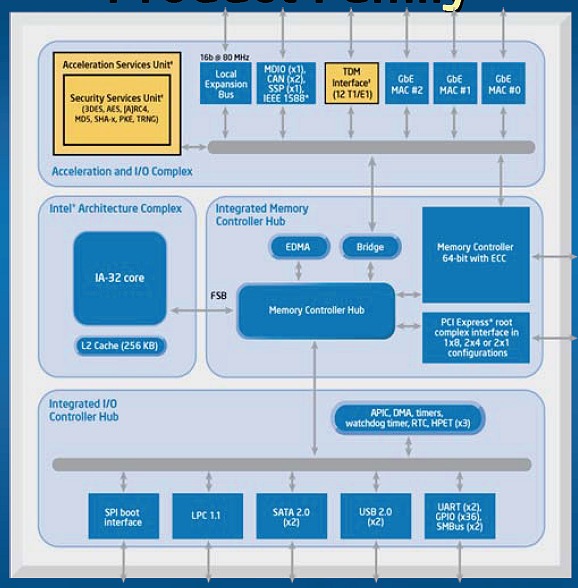 Knowing that the Atom processor fares in the same performance ballpark of the original Pentium M processor, the Intel EP80579 Integrated Processor family should stack up quite similarly too. What's interesting to note though is that this SoC solution consumes up to 45% less footprint of a Pentium M platform. This isn't surprising when you figure that four major functional units are enrolled into one chip, which would greatly promote small form factor applications. It also consumes up to 34% less power in comparison as it draws anywhere between 11 to 21 watts at clock speeds ranging from 600MHz to 1.2GHz.

In the end, to most consumers, the Intel EP80579 Integrated Processor family wouldn't mean much because it's not something you would actually find in any PC system of any sort because of its embedded applications design nature. Also, without an integrated graphics subsystem, this SoC part isn't much use to most consumer-related products. However what's significant about it is that an x86 SoC part based on the Intel Atom processing core has debuted and you can expect this mini milestone to bring more good news in other fields shortly.

For the rest of us, keep a look out for the second-generation UMPC chipset codenamed Poulsbo, which will also find its way on some netbooks as well quite soon. The current chipset (mostly the 945GME/GMS/GSE variants) paired with the Atom in netbooks are quite frankly not optimized enough for the platform. The Poulsbo isn't an SoC part, but it is a single-chip System Controller Hub (SCH) that contains the most relevant functions of the Northbridge, Southbridge and a third-party developed graphics engine. Besides being a more leaner chipset that accompanies the Atom processor, the graphics capabilities will include DirectX 9 and OpenGL compatible processing, 400M pixels/sec peak fill rate and is capable of HD decoding up to 1080i. This is probably just what the netbooks and UMPCs require to handle entertainment needs better than the current solutions. 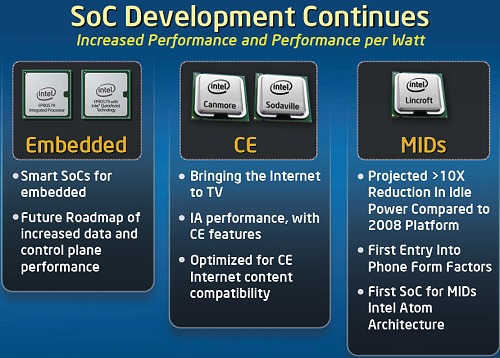 Further out on the next hop, the next generation Centrino Atom platform codenamed Moorestown will feature Lincroft, a full SoC chip that integrates the 45nm Silverthorne core (Atom) with graphics, video and memory controller on a single chip. But, we're still not at the Platform on a Chip (PoC) stage yet, as Lincroft will have to be paired with an I/O Hub still (codenamed Langwell). Still, the overall size of the PCB for the Moorestown platform is so small that Intel confidently proclaims that this will enable their first breakthrough at the handheld market and possibly a good start for MIDs (if consumers think they can cope with yet more segmentation or the lack-of for these new fangled devices).

The miniaturization scene has never more thriving than now and with the rapid progress of developing nations and the globalization phenomenon, everything's looking rosier then ever now (except for AMD who unfortunately seems to be still bleeding).