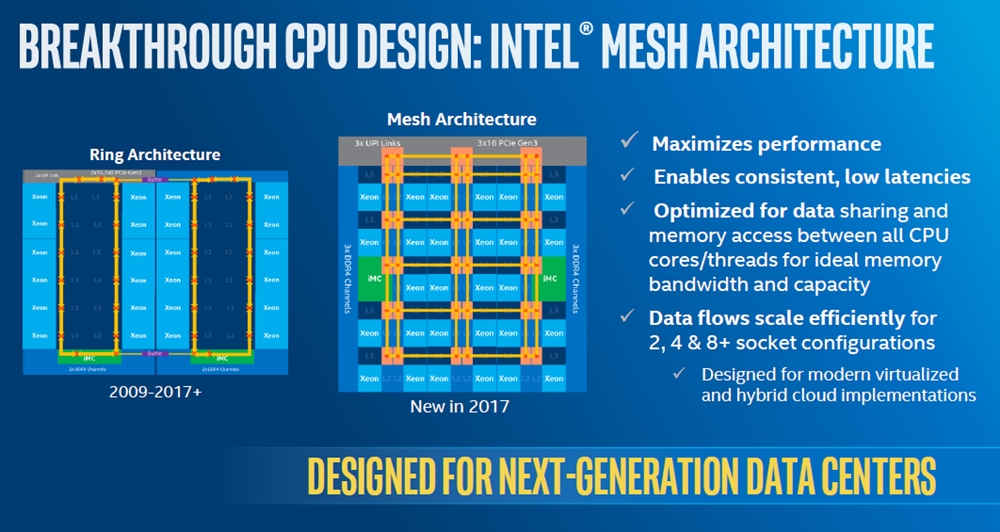 Before we moved on to more details of the processor platform, let’s have a quick recap of the new microarchitecture of the new Xeon CPU. The processor boasts of a new mesh architecture, which is inspired by the Intel Omni-Path Architecture technology. It has three main benefits of low power, high bandwidth, and low latency. This is in comparison with the previous generation ring bus architecture, which is limited mainly by the number of physical CPU cores, and the growing complexity of the interconnects linking them. The new mesh architecture even boasts of shared last-level cache among its CPU cores for enhanced performance. 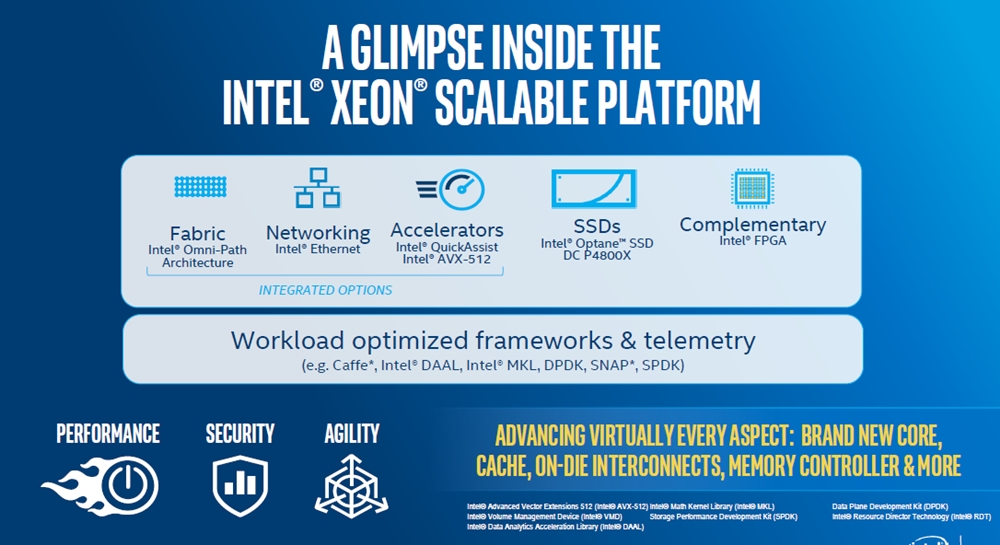 The main pillars of the Xeon scalable platform are performance, security, and agility. This is achieved through its integrated chip options, and its support for Intel Optane SSDs as well as complementary Intel FGPAs. The support for such Intel system chips will enable the Xeon processor to offload some processing tasks for better performance. Its support for accelerators that include Intel QuickAssist and Intel AVX-512. The latter accelerator is a first for Intel Xeon processors, and it mainly allows for more parallelism in processing instruction sets. This will lead to better performance, especially in HPC compute tasks. The Intel QuickAssist technology is mainly used for cryptography and data compression, and it allows the new Xeon Scalable platform to integrate with other peripherals that support Intel QuickAssist technology. The chip also features integrated Ethernet networking that supports up to four 10GbE links. The advantages of integrated networking capabilities include a smaller form factor for the server due to the absence of physical NICs. In the same breath, precious I/O lanes are freed up as PCIe lanes are put to more critical usage. At launch, the platform already supports 2-, 4- or 8-socket configurations. By leveraging on the new platform, Intel has engaged industry partners to build reference systems that have broad industry applications. There are three such reference systems at launch; the first is a system based on VMware that is built and configured to handle virtualization compute requirements. The second reference design is meant to tackle Microsoft SQL database workloads, and the last reference system, based on Ubuntu OS, is meant to handle virtual network functions. Each reference design has been rigorously tested, even right down to the software settings, and firmware configuration. The reference systems are delivered by Intel partners that include Lenovo, Huawei, and Supermicro. This allows for enterprise customers to embark on “an accelerated path” to upgrade their data centers. 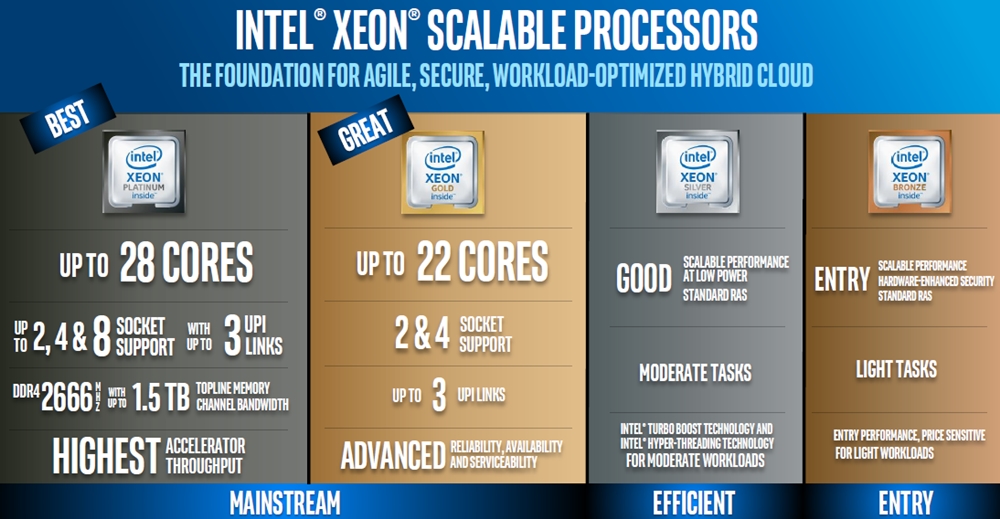 The first two family members, i.e., Intel Xeon Platinum and Gold are positioned as mainstream offerings while the Silver and Bronze are for efficient and entry systems respectively. The Intel Xeon Platinum 81xx processors have the most cores, with a core count of 28, and the highest operating frequency of 3.6GHz, for up to four CPU cores. It supports DDR4-2666MHz RAM across six memory channels. The top-end, 28-core Intel Xeon Platinum 8180 is rated to operate at 2.5GHz for all cores. In terms of power consumption, the chip has a TDP of 205W. Here's how the full Platinum series stack and their intended usage:- 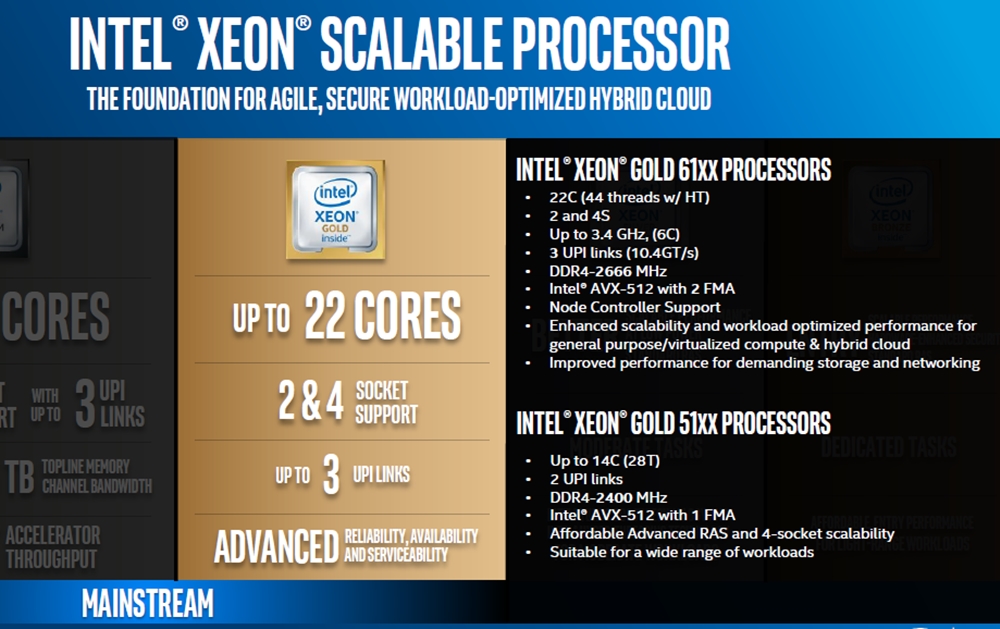 For Intel Xeon Gold CPUs, its range of chips are numbered 61xx and 51xx  respectively. The former has up to 22 cores, and support 2- and 4-socket configurations. Their highest operating clock speed is rated at 3.4GHz for up to 6 CPU cores. They support DDR4-2666MHz memory. The highest-end Xeon Gold processors include the 20-core, 2.4GHz Intel Xeon Gold 6148 and the 18-core, 3.0GHz Intel Xeon Gold 6154. As for the 51xx SKU members, they feature up to 14 CPU cores, with support for 4-socket scalability. Here's the full list:- 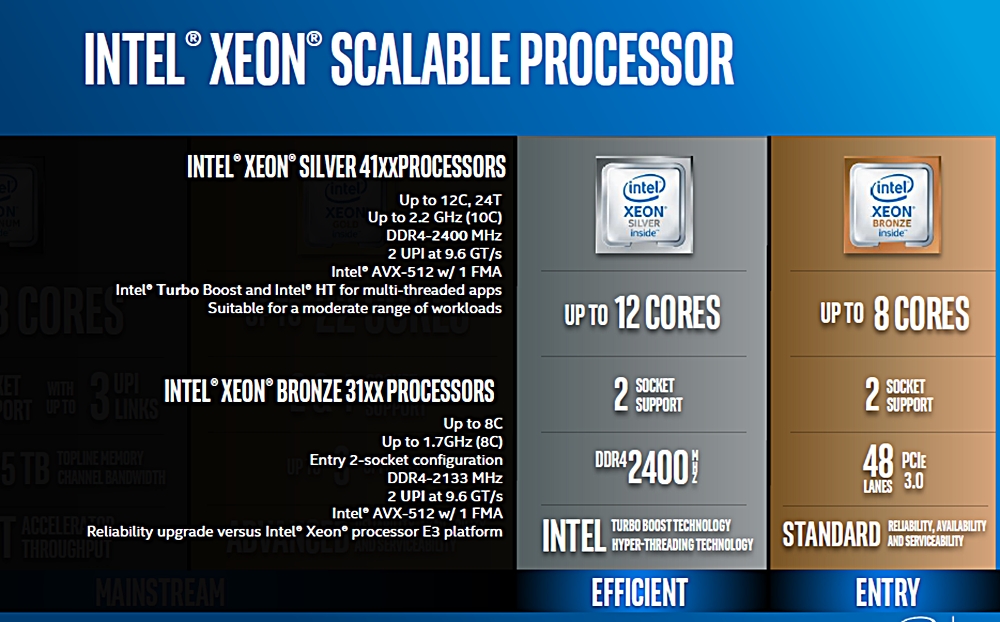 The Intel Xeon Silver processors are optimized for balanced energy efficient performance per watt. They feature up to 12 cores, with a rated clock speed of 2.2 GHz (up to 10 cores). In terms of system memory, they support DDR-2400 RAM modules. The Xeon Silver CPUs can scale up to a pair, and they include the 12-core, 2.1GHz Intel Xeon Silver 4116, with a TDP of 85W. In fact, most of the processor SKUs are designed for 85W or below TDP spec:- 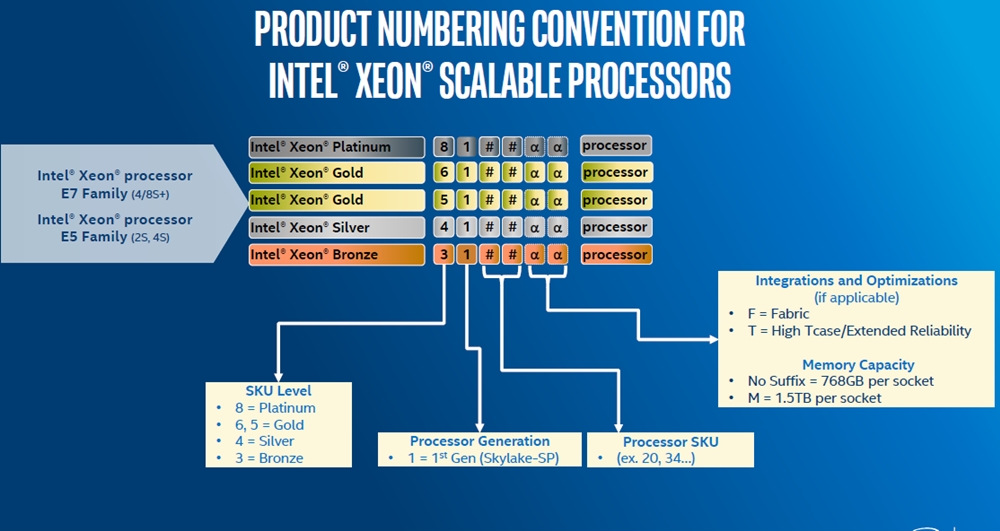 Only some of the Intel Xeon Platinum and Xeon Gold Scalable Processors feature integrated Intel Omni-Path Architecture Fabric while the Bronze SKUs don’t have this luxury at all by virtue of their use-case model. These Xeon Scalable Processors have the ‘F’ appendix to indicate this integrated feature. The other appendix ‘T’ will indicate if the processor has high Tcase and high reliability. These appendices also belong to the realm of the Xeon Platinum, Gold and Silver processors.

Based on the pre-launch slide deck, Intel has yet to release the finer details, but we should be able to see the entire range of Intel Xeon Scalable Processors with all their details during its official launch. Some online publications have likened their new branding to credit cards. While we do confer with that opinion, we feel that the 'streamlining' of the Xeon processors, and the expansive reach of its Xeon Scalable Platform will bode well for this new series.

For example, as we first touched upon the new Xeon processor range classification, a traditional EX-class chip that's made for high processor count within the platform would naturally have a lot of cache on-chip. Some vendors might like to have that attribute for their workloads, but perhaps only on a single-chip or dual-chip platform as they don't necessarily need a full fledged multi-processor solution. Likewise, some vendors may feel they don't need too many cores, but they do appreciate very high clock speeds. This is why the new Xeon Platinum, Gold, Silver and Bronze series come in to play to provide a much wider variety of SKUs to pander to every need. This is a stark contrast to the Intel Xeon E7 v4 series that was launched slightly more than a year ago and was targeted specfically at servers that are running real-time data analytics and other mission critical applications.

The new Xeon Scalable Processors look to pose a veritable challenge to rival AMD EPYC chips that are targeted at the same data center market segment. Here's a sneak-peek from Intel's customers on the performance gain they've realized in their deployment of Intel's latest Xeon processor platform:-