Note: This feature was first published on 5 January 2022.

It's hard not to forget Intel's long-awaited 12th Gen Core processor launch in October 2021 with six chips focussed on the overclockers in mind and has captured the attention of the enthusiast community in a big way with big performance gains right out of the box as our review has demonstrated. With an all-new scalable SoC architecture utilising the first-ever high-performance hybrid-core design (through a set of Performance and Efficiency cores) on the new Intel 7 processor technology, the 12th Gen Core was bristling with advancements all around, even at the platform level. It's no wonder the 12th Gen Core was one of our favourite launches of the year.

To fulfil its claim of a scalable SoC architecture, at CES 2022, Intel flooded the industry with 50 new 12th Gen Core processors! 28 of them belong to the H-series, P-series and U-series mobile processors, while a further 22 are desktop processors that range from Core i9, all the way down to a Celeron processor. Yes, Intel still has Pentium and Celeron SKUs. Here's the full desktop stack released:-

*Note that Intel's Turbo Boost Max 3.0 first debuted with the Intel 10th Gen Core desktop processors and is a technology to identify the best performing cores to provide even more uplift in performance. It does this by identifying the two best cores for improved single and dual-core turbo results. There is no extra voltage applied to these cores in this mode.

Beyond the Core series listed above, Intel still has two dual-core parts, the Pentium Gold G7400 and Celeron G6900, both with Intel UHD Graphics 710 integrated graphics and forego any turbo frequency scaling capability. Listed at just US$64 and US$42 respectively, they are of course the most affordable 12th Gen Core desktop processors. However, that goes without saying for this tier of CPUs and you'll notice something far more unusual from the above-listed core configurations, which we'll address next.

Where did the E-cores go?

Unlike the K-SKU models released earlier that maintained the two different types of cores (even in the Core i5 models) - Performance and Efficiency - and are the highlight of the 12th Gen Core (Alder Lake) processors, the non-K models released today only maintain the dual-core design types on the Core i9 and Core i7 parts. Core i5 models and below have completely dropped all Gracemont (Efficient x86) cores and only maintained the Golden Cove (Performance x86) cores. (If these names don't ring a bell, we've covered them here.)

Now this flies against all of the hype Intel has rallied around the new 12th Gen Core processors, but perhaps efficiency and especially power efficiency isn't a key aspect on desktop processors (they still maintain them in the mobile processor models). All the more without the dual core types, Intel's processor dies are radically simplified, plus there's no need for the Intel Thread Director to come into play too. That makes these processors easy to push out in volume for the mass market consumers riding on the 12th Gen marketing train.

As a consumer, do you have to be concerned? Do the missing E-cores affect performance standings? Looking at the specs list in the table, you'll notice that the base clocks of the P-cores on the Core i5 models are much faster than those on the Core i7 and i9 models. This suggests that while there might be lower performance per watt efficiency, where raw performance is concerned, the Core i5 models can be competitive and perhaps offer interesting performance that we're keen to find out firsthand. According to Intel's testing with industry-specific content creation benchmarks, it does seem like it can hold its own. For example, the new hex-core Core i5-12600 seems to have no problems leading the octa-core AMD Ryzen 7 5700G mainstream processor.

In the realm of gaming, Intel chose to compare a Core i9 processor against its 11th Gen Core processor, which expectedly look good, but it won't be long before we have a go at these processors ourselves. Till then we'll leave you with Intel's story:- 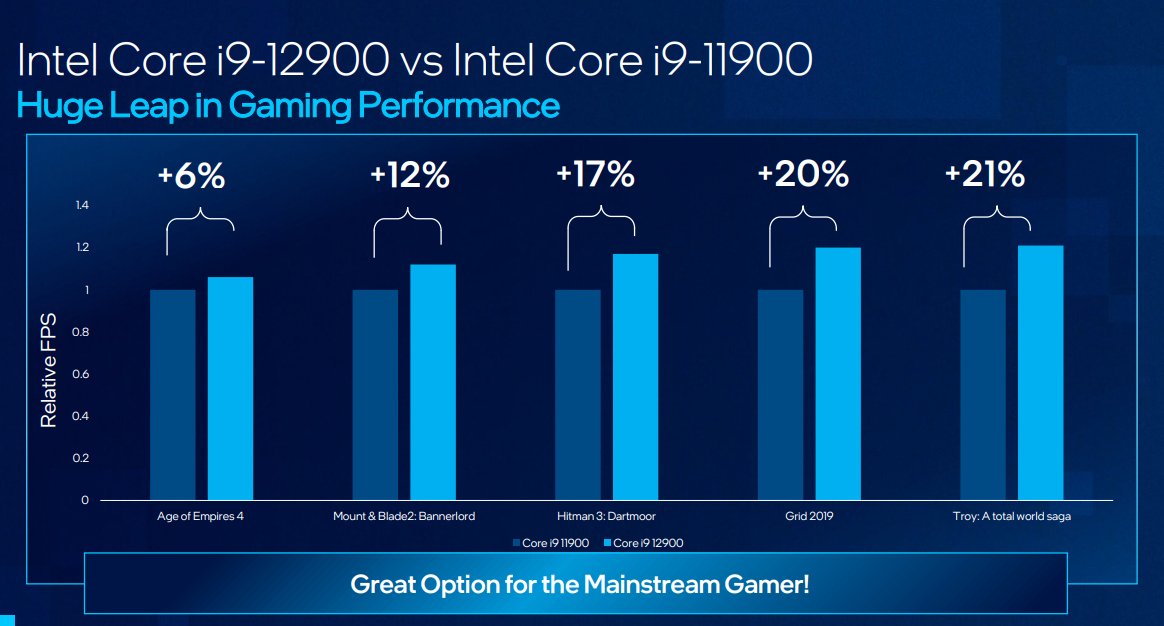 In a surprise move, Intel has updated its default air coolers bundled in their retail in-box packaging - something that has hardly changed in years. Does this have something to do with the maximum rated turbo power drawn by the 12th Gen Core processors? It is after all quite a bit higher than the base processor power draw rating and in our testing of the K-SKU processor, we noted that it was giving off so much heat that a liquid cooler is a must. 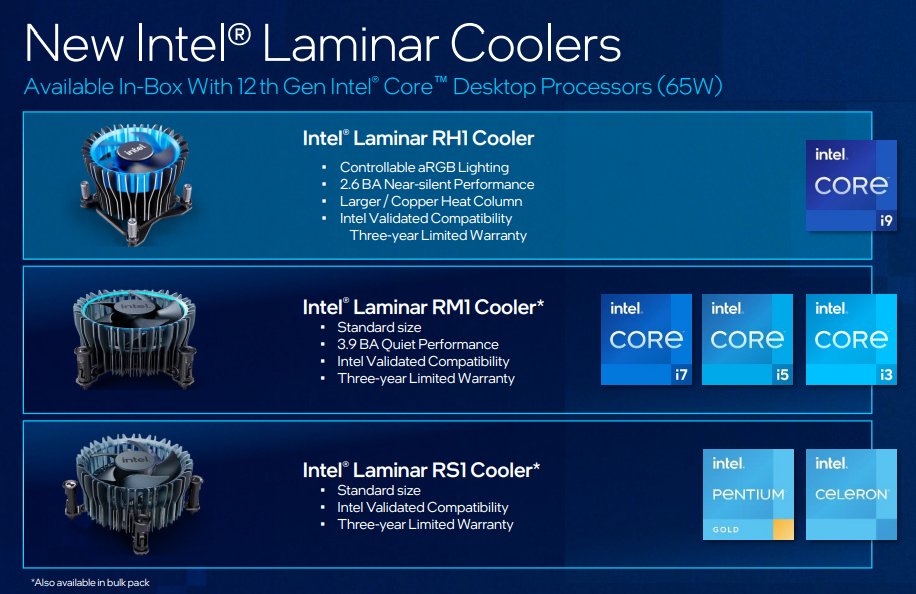 Be that as it may, it's a good thing Intel felt it was necessary to address this tactfully with suitable new coolers to address air cooling needs. The Core i9 processors get fancier and quieter coolers, but we'll leave the above image to do the talking on what you can expect. These, of course, don't apply to K-SKU processors that launched earlier.

The processors listed above are rated for 65W base power draw, but Intel also has variants of them that draw lower power with these 35W base power models for the same price point. The catch? They run at much lower base clocks though their peak clocks are only slightly off.

Like the 65W base power counterparts listed earlier, the 35W companions also have Pentium Gold G7400T and Celeron G6900T parts and have the same characteristics such as being dual-core parts with no turbo frequency scaling and are fitting with Intel UHD Graphics 710 integrated graphics. 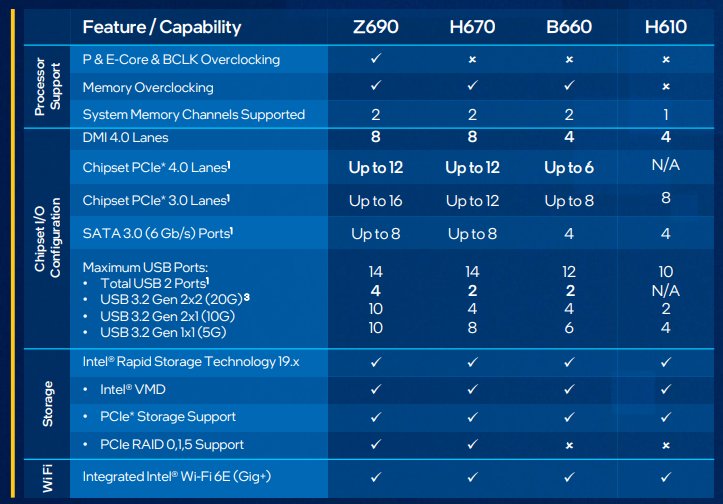 Along with the boatload of new processors, Intel has also launched more affordable chipset options for varying user needs other than the flagship Intel Z690 chipset that we've covered earlier. While you could pair any of the newly launched processors with a premium Intel Z690 chipset based motherboard, this chipset is most ideal to pair with K-SKU processors that allow manual overclocking by varying its base clocks, which this chipset supports as well.

For all other users, other than needing more high-speed USB 3.2 ports out of the box, an Intel H670 chipset based board would be more than sufficient.

If you don't plan to outfit your system with lots of PCIe NVMe based storage (M.2 or other formats), the Intel B660 chipset could be an ideal option to save more costs on your choice of motherboard. This also bodes well that the chipset loses PCIe RAID capability and reduced DMI 4.0 lanes, which is in line with reduced storage options used for the system.

The Intel H610 chipset is the lowest tier option, which in my opinion is most ideal for system vendors and OEM folks rather than for enthusiasts as there are many more limitations that don't showcase the 12th Gen Core processor in its best form. As a platform, it loses PCIe 4.0 lanes from the chipset and has more limited USB support. However, for those needing a simple system, the Intel H610 will still be sufficient as a baseline setup.