The configurations of the test setups we used for the different processors are listed below. However, the CPU cooler used differed between systems due to compatibility issues across the different sockets.

The Intel Core i7-8700K took the overall lead here, likely thanks to its high Turbo Boost 2.0 speed of 4.7GHz and relatively robust multi-threaded capabilities. Compared to the Core i7-7700K, it was roughly 11 per cent faster, a modest improvement for yet another generation of 14nm processors. It also beat out the quad-core Core i7-7740X, a member of Intel's enthusiast Core X family, by a similar amount, further underscoring the uncomfortable position of the latter chip.

The flagship Coffee Lake CPU was also 26 per cent quicker than the Ryzen 7 1800X, despite both chips having relatively similar base clocks. However, discounting the large gap between the maximum speeds that the Core i7-8700K and Ryzen 7 1800X are capable of – 4.7GHz versus 4.2GHz – it's worth noting that the Core i5-8600K also managed to beat the AMD chip by about 9 per cent.

That's despite having just six cores with no Hyper-Threading, and a Turbo Boost 2.0 speed of 4.3GHz, not that much higher than the 1800X's 4.2GHz. As a result, it would seem that when it comes to the applications used in SYSmark, Intel still has the advantage because of its higher IPC.

A look at the workload breakdown also hands a clear advantage to the Core i7-8700K over Ryzen in media creation and data and financial analysis-related tasks, even though AMD still has more cores and threads on paper. 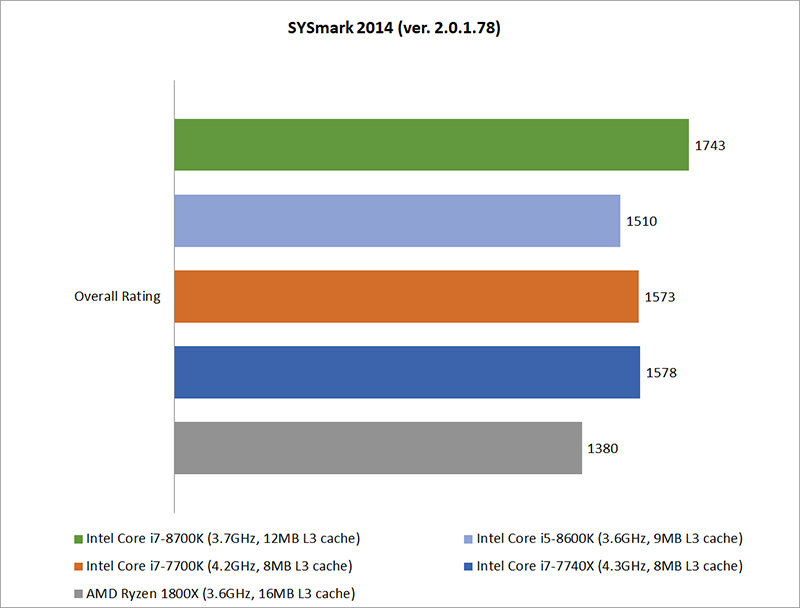 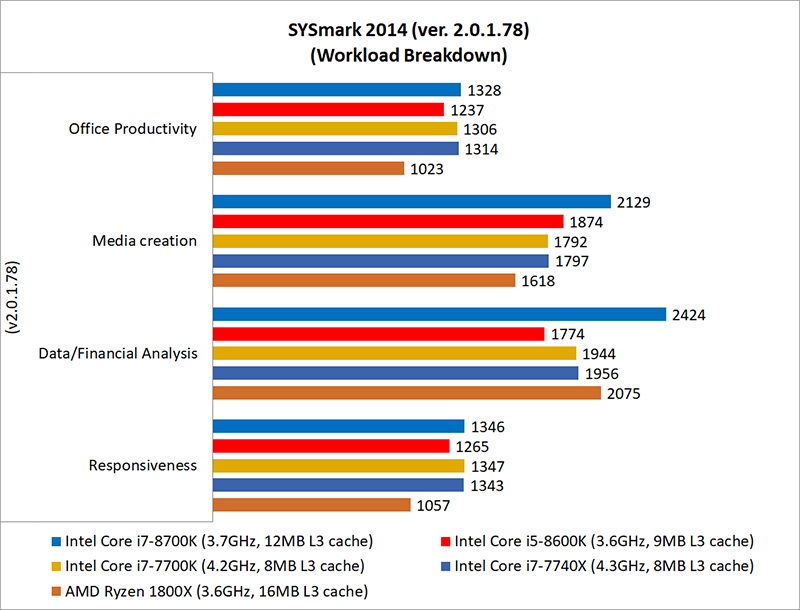 PCMark 10 Extended assesses the performance of systems in a variety of workloads, including basic computing tasks, productivity applications, digital content creation, and gaming. Compared to PCMark 8, it also adds in new test metrics, such as app startup times, which quantifies how long it takes to launch a variety of real-world apps, and a rendering and visualization workload to simulate professional graphics and engineering applications. In addition, existing workloads have been updated to reflect modern usage

We’ve also added in a graph to reflect the low-level breakdown of scores to give an idea of performance in individual workloads.

The Core i7-8700K took the overall lead here as well, and it was followed by the Core i5-8600K. The former showed particular strength in digital content creation tasks, including the more demanding rendering and visualization workloads. The Ryzen 7 1800X fell behind both 8th-generation Intel processors, coming in around 16 per cent behind the Core i7-8700K in overall scores.

Intel added more cores and threads on its new processors while not sacrificing on single-threaded performance, and this two-pronged approach serves its new chips quite well here. 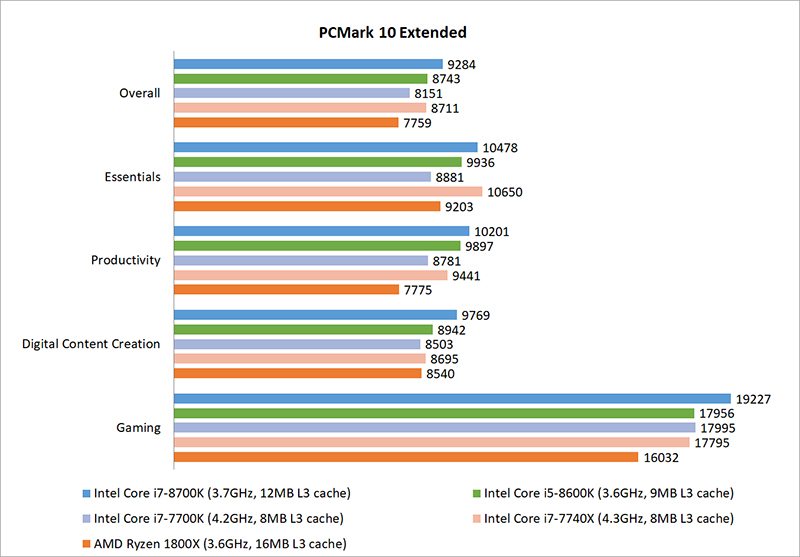 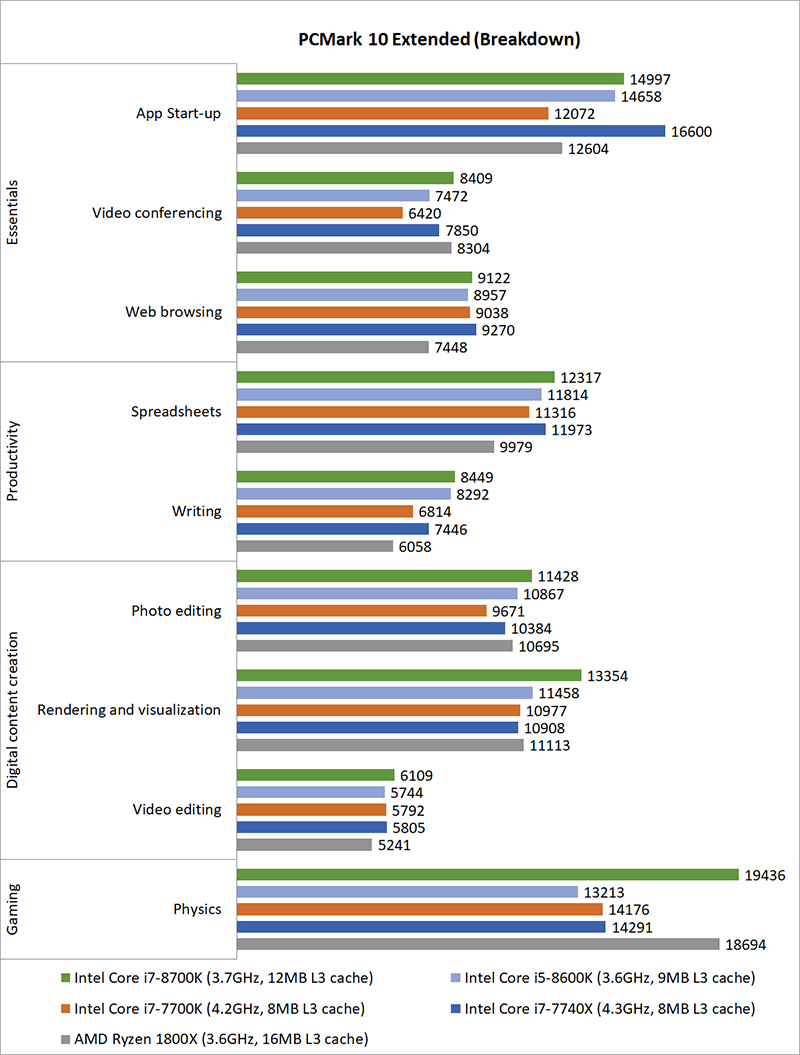 The programs used in SPECviewperf 12.1 don't appear to scale very well with a high number of cores and threads. Results were mixed here, with the Core i5-8600K even coming ahead of its Core i7 counterpart in the 3ds-max viewset. That said, the Ryzen 7 1800X still trailed both Intel chips, perhaps another instance of Intel's higher IPC helping it come ahead. 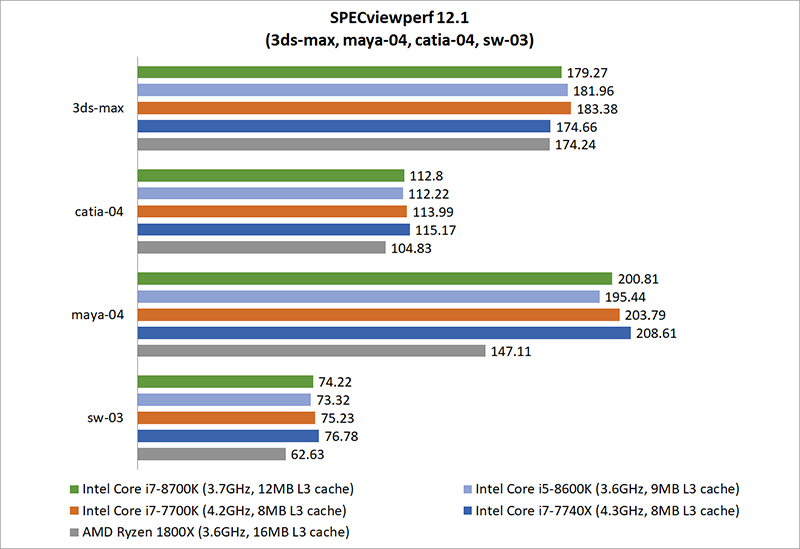 Unsurprisingly, the 8-core/16-thread Ryzen 7 1800X had a field day here, but the 6-core/12-thread Core i7-8700K actually comes quite close in the multi-threaded benchmark. AMD's processor was 14 per cent faster than the Core i7-8700K, a much narrower lead than the 65 per cent advantage it held over the Core i7-7700K. Intel has closed a lot of ground in just a single generation, and it continues to reign supreme in terms of single-threaded performance, where the Core i7-8700K was 23 per cent quicker than the Ryzen 7 1800X.

The six-core Core i5-8600K also managed to edge out the Core i7-7700K by a hair (just 5 per cent) in the multi-threaded benchmark, which is a nice improvement given that the former doesn't even feature Hyper-Threading. 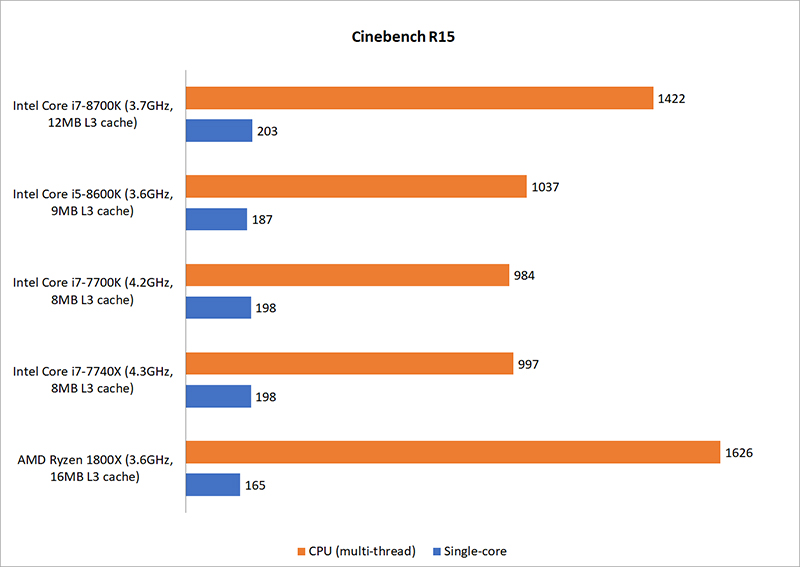 Handbrake is a video transcoder that converts videos into a format for use on PCs and portable electronic devices, and is a good indicator of a processor’s video encoding capabilities. YouTube content creators, Twitch streamers, and other video creators will be most interested in this performance metric. For this benchmark, we used a 1.5GB .mkv file.

Video transcoding can take advantage of multiple CPU threads quite well, and the Core i7-8700K gave the Ryzen 7 1800X a run for its money here. AMD's chip still took the pole position, but the Coffee Lake flagship is nipping closely at its heels.

The Core i5-8600K performed closer to the quad-core Core i7-7700K and Core i7-7740X, although to its credit, it again eked out a sliver of a lead over the latter two Hyper-Threaded CPUs.

This time around, Intel is going after so-called "mega-taskers" with its mainstream chips. This refers to those who stream, game, and run multiple CPU-intensive tasks at once. And from the looks of it, the Core i7-8700K is proving itself reasonably adept in this area. At the very least, it's quite a decent improvement over the Core i7-7700K from the previous generation. 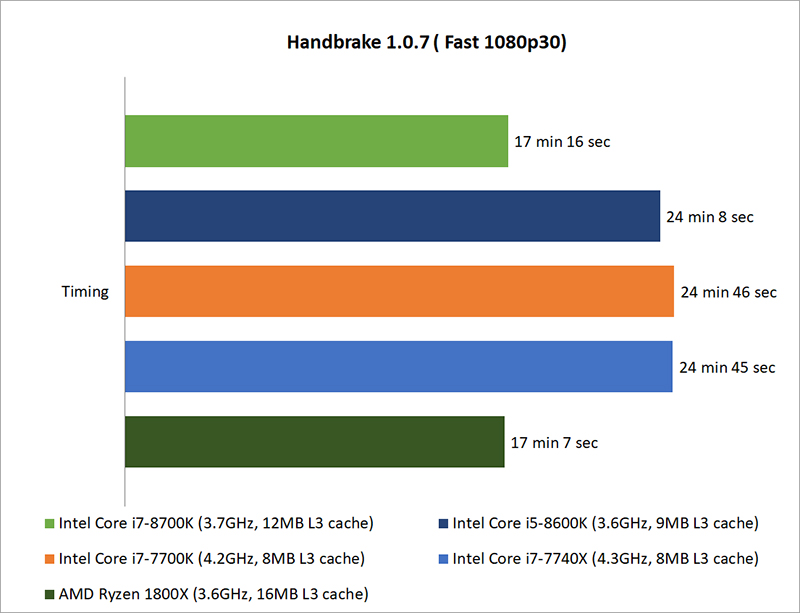 To test temperature and power consumption, we ran the 3DMark Fire Strike Extreme Stress test and the energy-01 viewset in SPECviewperf 12.1 respectively, taking note of the peak values the chips achieved. For power consumption, this refers to the total system power draw from the power outlet.

It’s difficult to compare temperatures across all the chips given that we used different coolers for the Intel and Ryzen chips, so these figures are better taken as a rough indicator to the temperatures you can expect in a typical gaming scenario (which probably doesn’t stress all the cores anyway).

The higher TDP of the Coffee Lake chips is evident in the power consumption numbers, which reflect the total system power draw from a wall outlet. Both the Core i7 and Core i5 8th-generation processors are 95W parts, and they're proving to be quite a bit more power-hungry than the Ryzen and Kaby Lake CPUs. 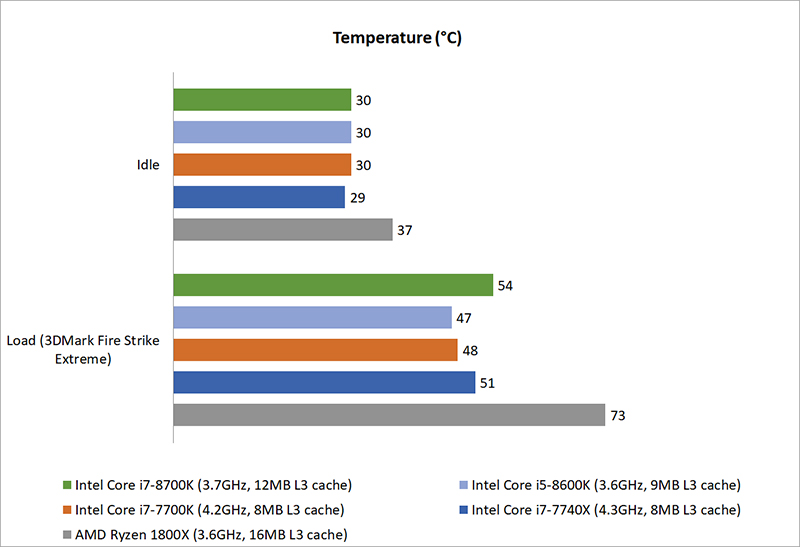 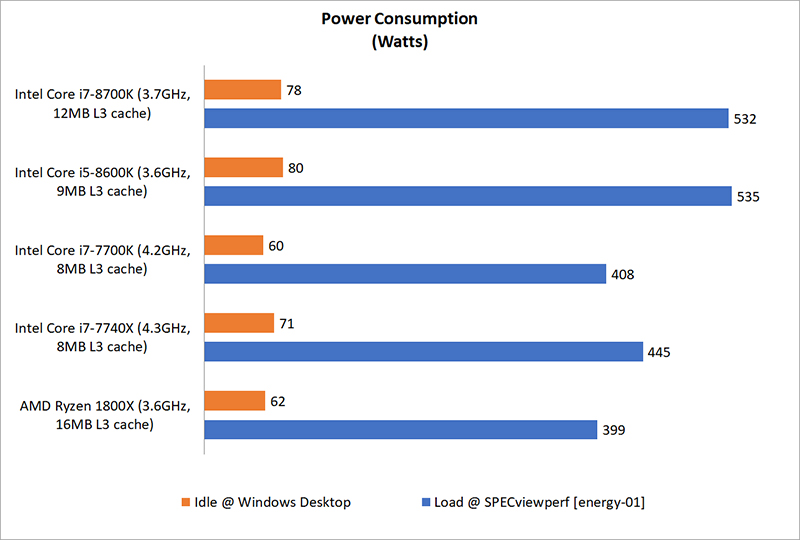