Intel to Celebrate 20 Years of Pentium with Anniversary Edition

Computex 2014: Intel to Celebrate 20 Years of Pentium with Anniversary Edition

The Intel Pentium processor was first introduced more than 20 years ago to replace the 80486 microprocessor. Launched on 22 March 1993 to much fanfare, it was dubbed as P5, Intel's fifth generation processor. Featuring state-of-the-art performance enhancements which included a superscalar architecture and 64-bit databus, the P5 was without its share of problems. The first version of the P5 operated at 5V and was based on a rather dated 0.8 micron process technology that was still being used for its 486 range of processors. At normal operation, the processor was known for its excessive heat and was a cause of concern. It also had a floating point error famously known as the Pentium FDIV bug, which was discovered in 1994 by professor Thomas Nicely at Lynchburg College, Virginia.

Although it had a bumpy start, it enjoyed much success as it evolved over the years, until it was eventually replaced by the new Core microarchitecture. 20 years later and the Pentium brand still continues to thrive in desktops, mobiles, servers and embedded systems. Although it doesn't carry the premium as before, Intel has branded its range of Pentium processors as budget parts that will deliver the performance needed for both work and play.

To celebrate 20 years of this Pentium brand, Intel will make available a special anniversary edition of the Pentium processor for enthusiasts. Based on the Haswell architecture and the latest 22nm process technology, the new Pentium Processor Anniversary Edition is a dual-core processor with a base frequency of 3.2GHz. But what sets this apart from the rest of the other Pentium processors is its unlocked core that will allow overclockers to tune its performance. Since it's a dual-core part, overclocking should be easier than its quad-core counterparts and it won't cost a bomb as well. Priced at only US$72 for 1K units, the Pentium Anniversary Edition will be available sometime in June 2014 and will be sold as an Intel Pentium G3258 processor. 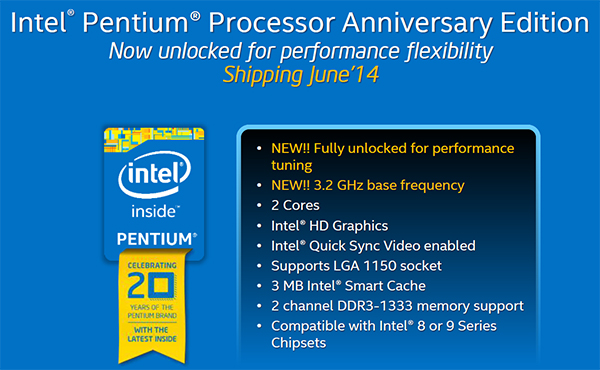