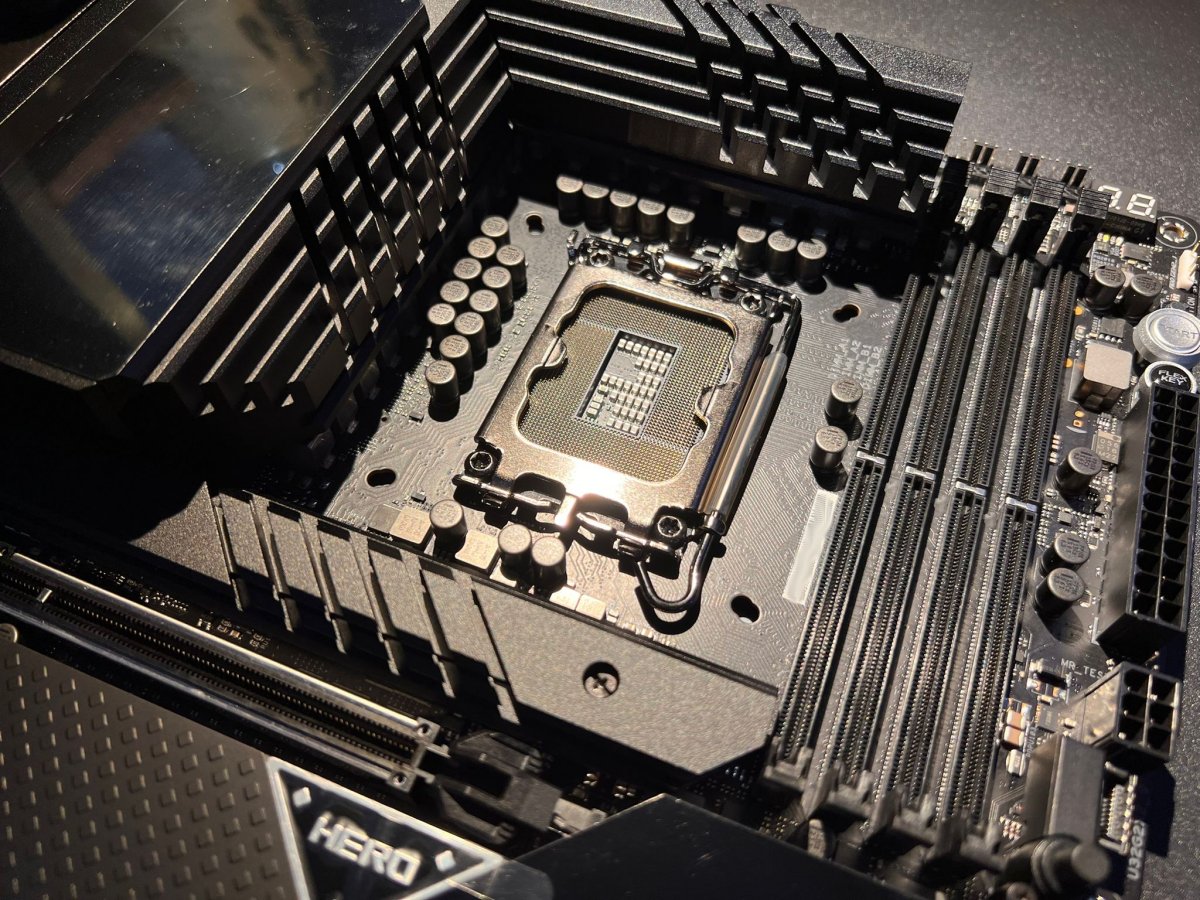 The 12th Gen Core processors have memory controllers that support either the latest DDR5 memory or existing DDR4 memory. So it's nice to know you have a choice.

However, which memory standard you can use comes down to whether the Intel Z690 motherboard you've chosen is built for DDR4 or DDR5 memory. At the moment we've yet to see motherboard models with implementation for both memory types like in the old days where dual memory type options existed. However given the vast differences between both memory types such as on-DIMM memory voltage regulation for DDR5, it looks unlikely that a motherboard can support both memory types as it will escalate board design complexity and price.

So choose your motherboard wisely in advance.

Should you choose a DDR4 or DDR5 based motherboard?

If you're upgrading from a DDR4 based platform, perhaps choosing a DDR4 based Intel Z690 motherboard could be a wise choice where value out of pocket damage is concerned.

If you're starting afresh or have no compatible memory to re-use, perhaps ponying up for DDR5 memory might be a wiser investment in the long run. Besides the longevity of re-using the memory for a later platform, don't forget DDR5 specs point to a big jump in speed, bandwidth and density. There's also the possibility the DDR5 memory modules you've picked up are Intel XMP3.0 certified, further unlocking more features and capabilities. More on this later.

How fast can you go with DDR5 or DDR4 on the new platform and what about memory configuration options?

For DDR4, it's pretty much status quo to 11th Gen Core processors with dual memory modules supported per memory channel at speeds up to DDR4-3200. So that's a total of four DIMMs for a typical setup.

With DDR5 memory, Intel states you can get frequencies as high as DDR5-4800. However, the memory frequency supported is dependent on other factors like a) how many slots are provisioned per channel on the motherboard, b) how many DIMMs are populated per channel and c) if it is a single rank or dual rank DIMM memory module. Intel has compiled this table for a quick reference:- 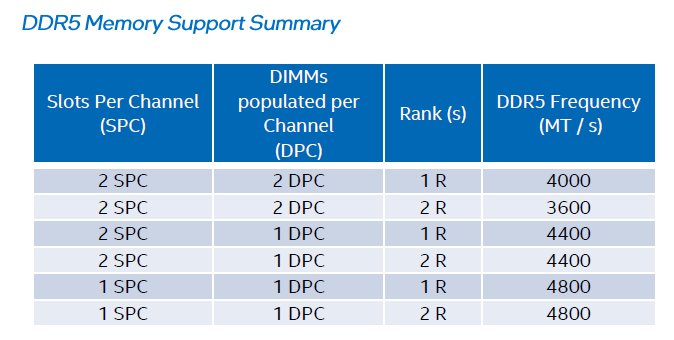 Taking into consideration all the mentioned factors, your DDR5 memory frequency can range from anywhere between 3,600MT/s to 4,800MT/s. Some other notes that are good to keep in mind is not to mix memory varieties/brands within the same channel and symmetric configurations are required within the same channel, i.e. single rank or dual-rank DIMMs on both slots (1R/1R, or 2R/2R).

Now, these are just the official memory speeds as supported by Intel officially. However, given the right motherboard, the right memory modules and memory configurations, you could go way higher than the frequencies listed here. A peek at Gigabyte's top Aorus motherboard's memory speed options go higher than 7,000MHz!

So that brings us to the next topic of memory overclocking.

What's Intel XMP 3.0 and why does it matter? 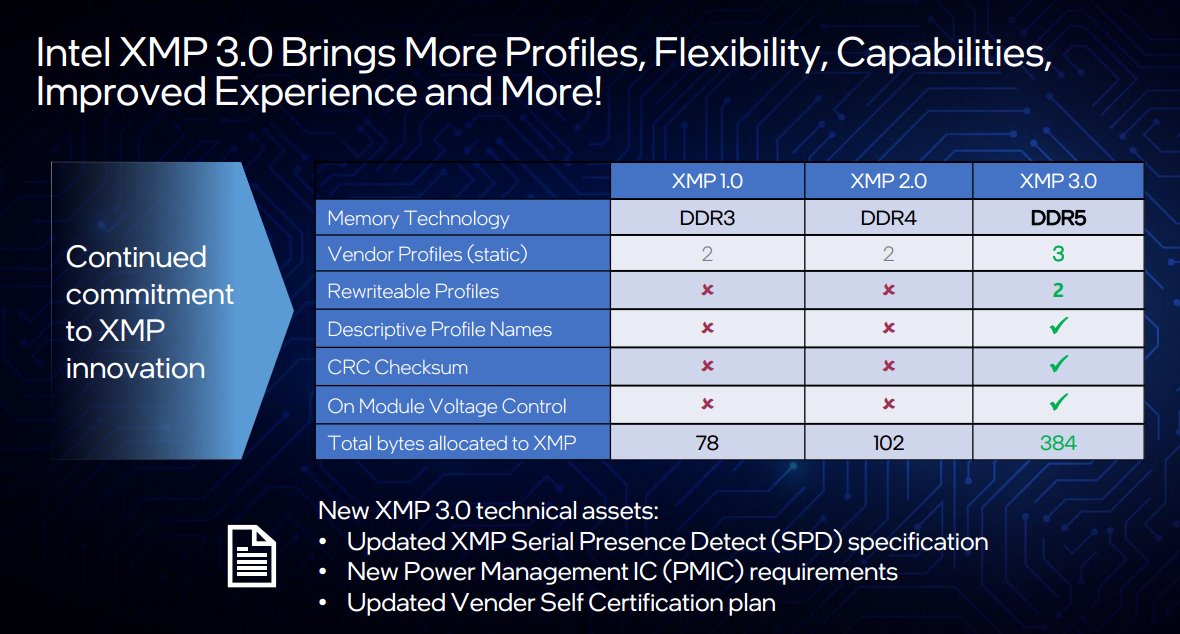 In tandem with a vastly capable memory spec (DDR5) that's debuting with the Intel Z690 motherboards and the 12th Gen Core processors, Intel has also chosen to beef up its Extreme Memory Profile (XMP) specs.

It's basically a pre-tested and qualified memory profile that you access in the BIOS and you apply it for enhanced performance, be it more optimal latencies settings or in combination with a higher memory clock if the memory module has been certified for it.

Intel XMP 3.0 now adds more profiles, has more capabilities and is optimised for DDR5 memory since it derives voltage differently from past memory modules. There are now three vendors specified XMP profiles supported and even two more rewritable profile slots for your ease of saving an experimental profile that you feel works for your system. Additionally, profile names now support up to 16 characters, thus improving how you store and identify a profile. No more figuring out what 'Profile 1' means. 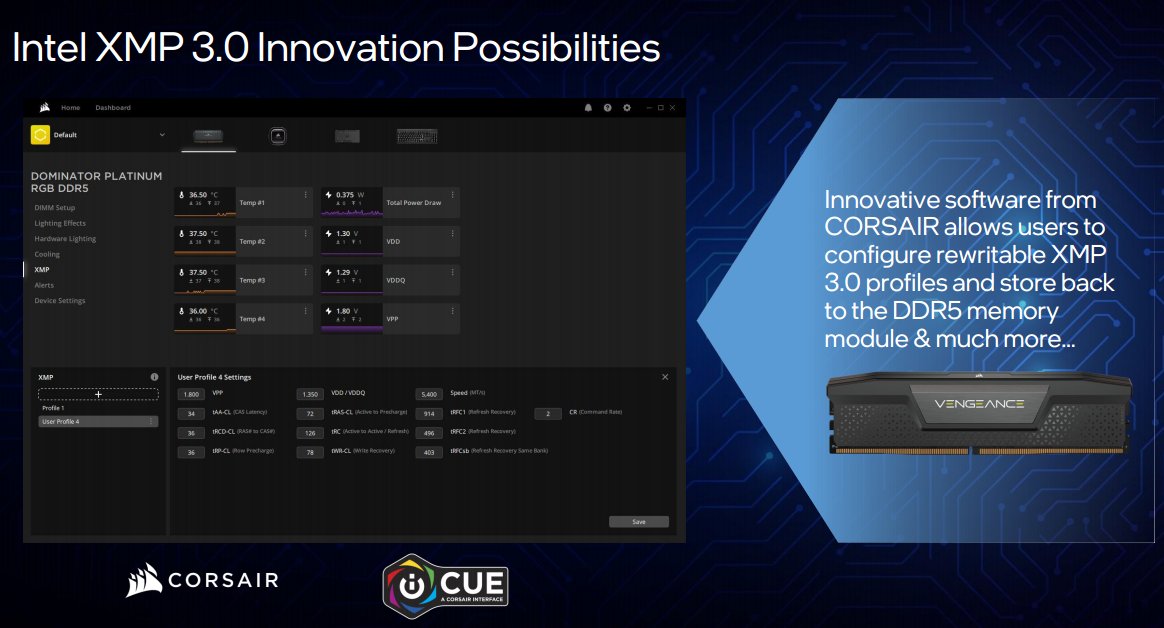 The 12th Gen Core processors take memory overclocking convenience up yet another level thanks to supporting the new Intel Dynamic Memory Boost Technology. As its name suggests, it delivers intelligent memory overclocking performance on demand when there's a workload that requires the boost. When there's no load, the system defaults to its default memory frequency. So that's power savings and less stress on your components.

While the functionality is a cinch, you get to specify which XMP profile to use as the boost frequency. No other intervention is required and it works with either DDR4 or DDR5 XMP certified memory modules.