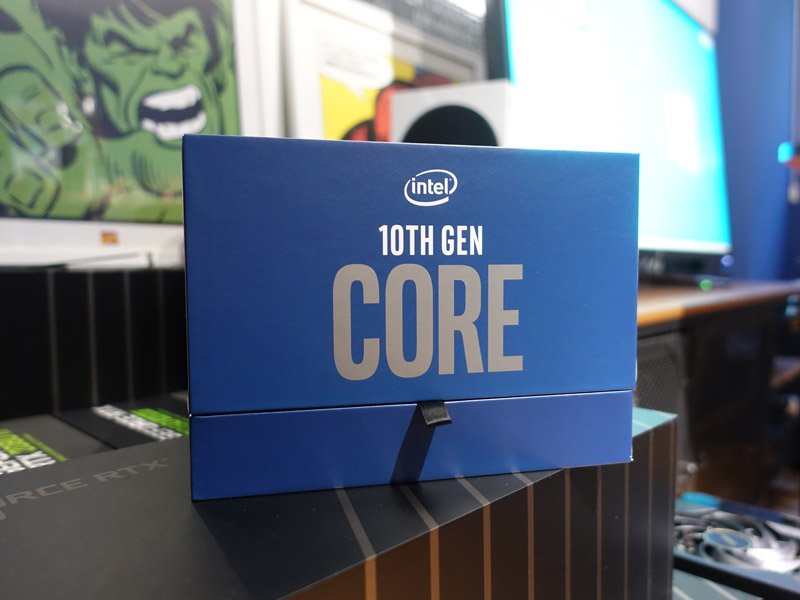 Our impressions of the highly anticipated Ryzen 9 5000 Series will be revealed soon. Based on the new Zen 3 architecture, AMD has touted these as the fastest CPUs for gamers. But before we go into that, let’s revisit the current fastest CPU for gamers – Intel’s 10th-Gen Core i9-10900K – with updated benchmarks numbers that we ran with NVIDIA’s newest GeForce RTX 3080 Founders Edition graphics card.

Released in May 2020, the i9-10900K is the top desktop CPU in the 10th-Gen Comet Lake lineup and represents the first time the company has jammed 10 processing cores into a single mainstream processor. Based on the ageing 14nm process (Intel’s struggle with shrinking their die size has been well documented), the processor comes with some new tech too such as the unshackling of the HyperThreading chains, allowing the processor to double the thread-count from each individual CPU core. That’s great news not only for gamers, content creators but also for server operators too – no doubt due to increased pressure from AMD’s Ryzen gains in recent years.

Sure, AMD has always touted the higher core and thread counts on its processors, but Intel’s big game has always been about its raw gaming performance and the i9-10900K is a continuation of that strategy. That’s not to say that Intel doesn’t have anything new up its sleeves; in fact, they already made a pre-emptive ‘strike’ and the competition for the hearts, minds and wallets of gamers looks like it will be a war of attrition between the blue and red camps this time (see what I did there?). 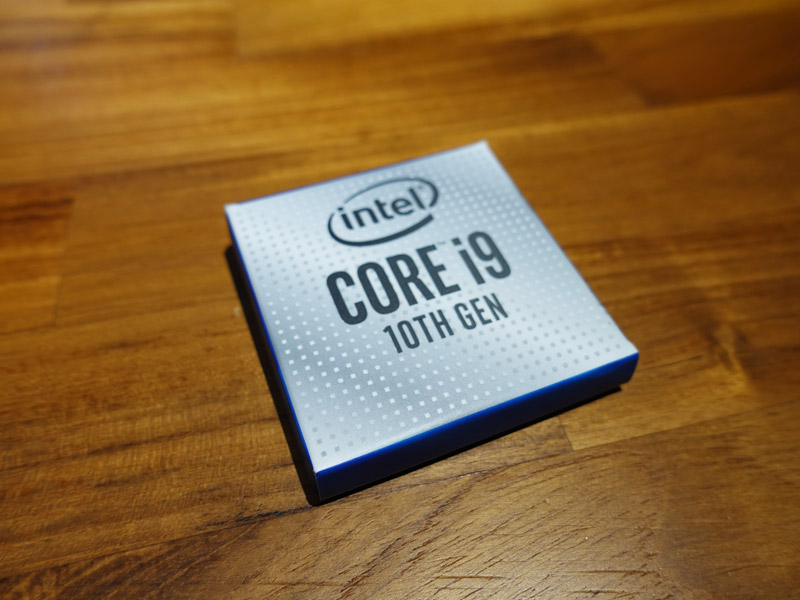 Intel has squeezed 10 CPU cores into the heart of the i9-10900K and along with HyperThreading, 20 threads of processing power. The processor also features Intel’s Thermal Velocity Boost (or TVB), which is only found on the company’s 10th Gen i9 desktop, 10th Gen i9, i7 and i5 mobile processors. What’s interesting is that TVB allows these CPUs to hit even higher boost speeds than its typical all-core turbo boost. This is only achievable if the CPU is running under 70-degrees Celsius and also if it is working beneath its power, current and temperature specifications. That’s why a water-cooled HSF system is recommended.

Onwards to the CPU’s benchmark performance.

For comparisons, I’ve used AMD’s current and fastest Ryzen 9 3900XT processor (which was released just a month after Intel's Core i9-10900K). On paper, both CPUs aren’t that far off from each other, with each having different trade-offs that I will get to below. To reiterate, the below gaming results are the result of pairing the CPUs with NVIDIA's GeForce RTX 3080 Founders Edition graphics card. 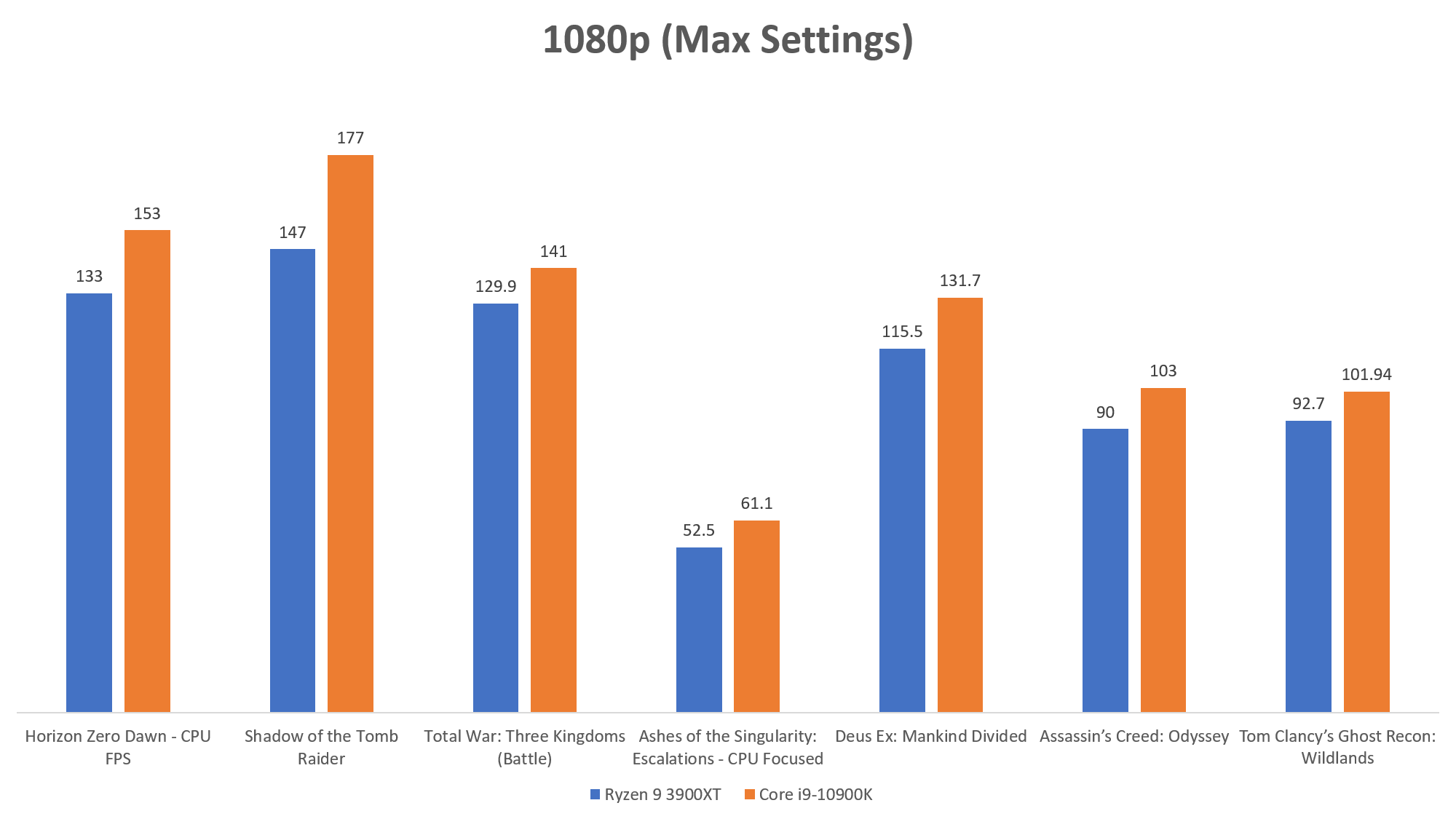 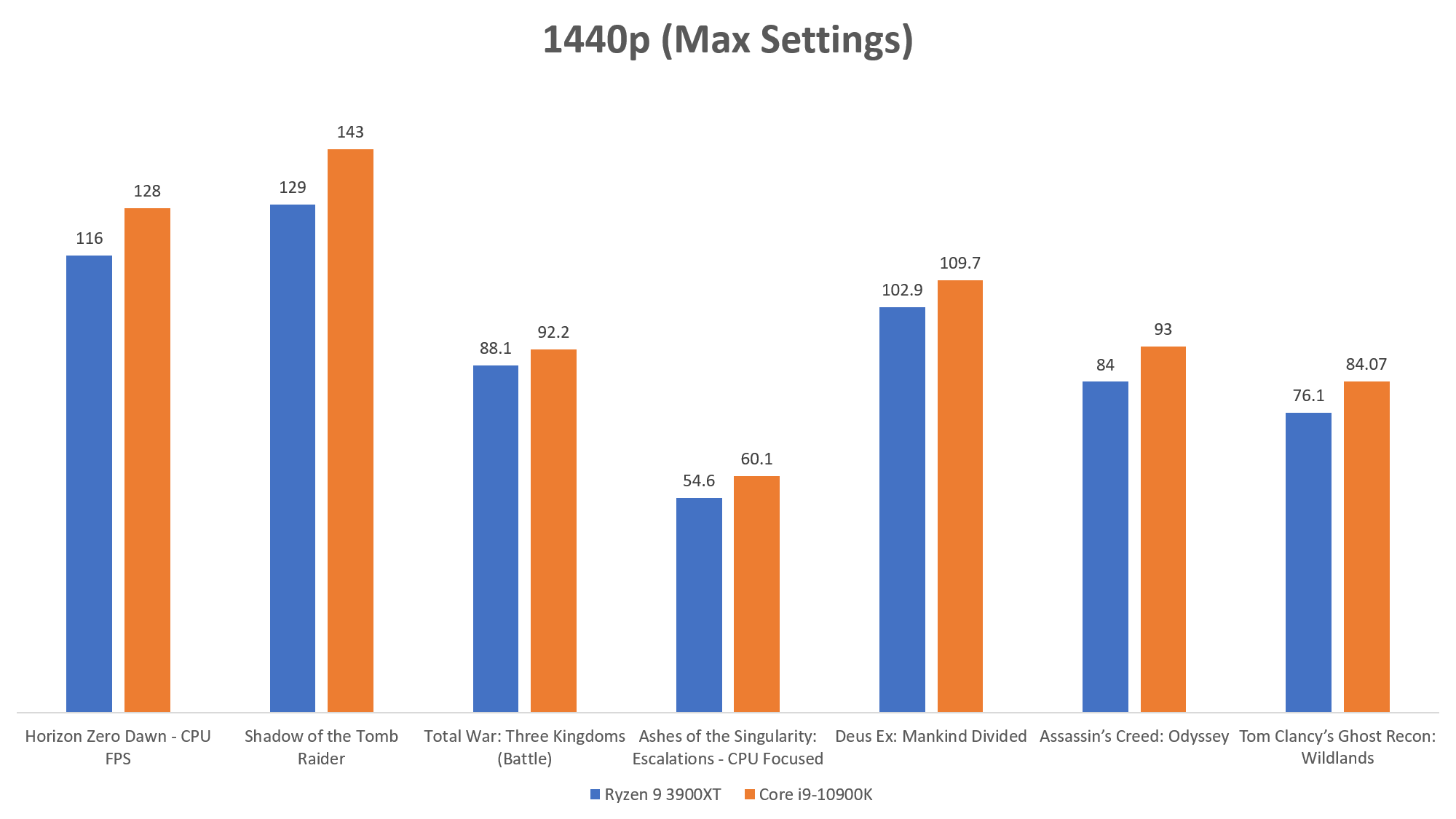 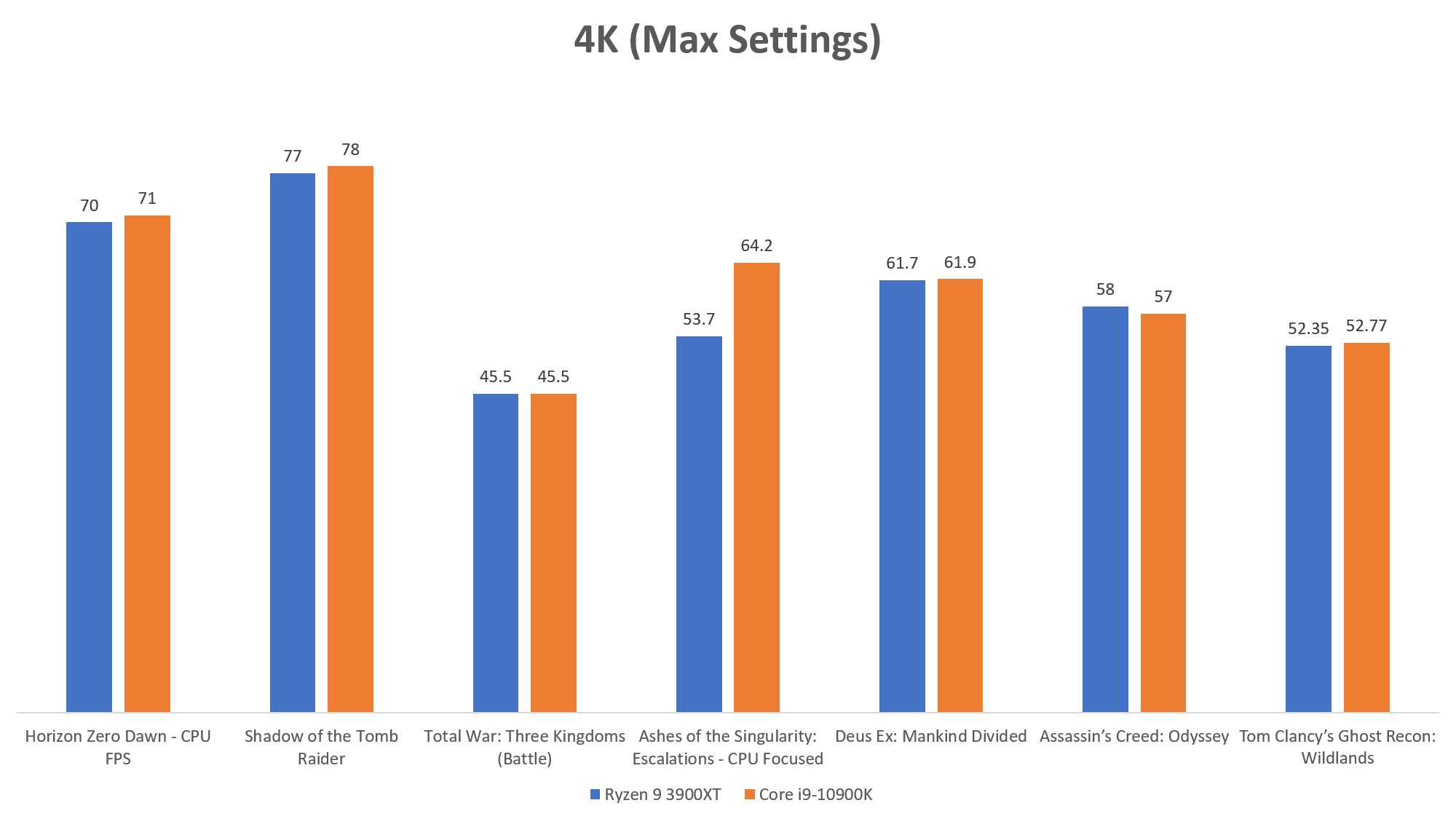 With gaming, there’s no question. The Core i9-10900K does live up to its “faster gaming CPU” tag, besting the 3900XT nearly all of the benchmarks above. 1080p gaming is a good way to measure the CPU performance as at that resolution the bottleneck lives with it and not the GPU. Conversely, at higher resolutions especially at 4K, you’ll notice that the gains diminish because the GPU now becomes the performance ceiling (except for CPU-focused benchmarks, like Ashes of the Singularity: Escalations). 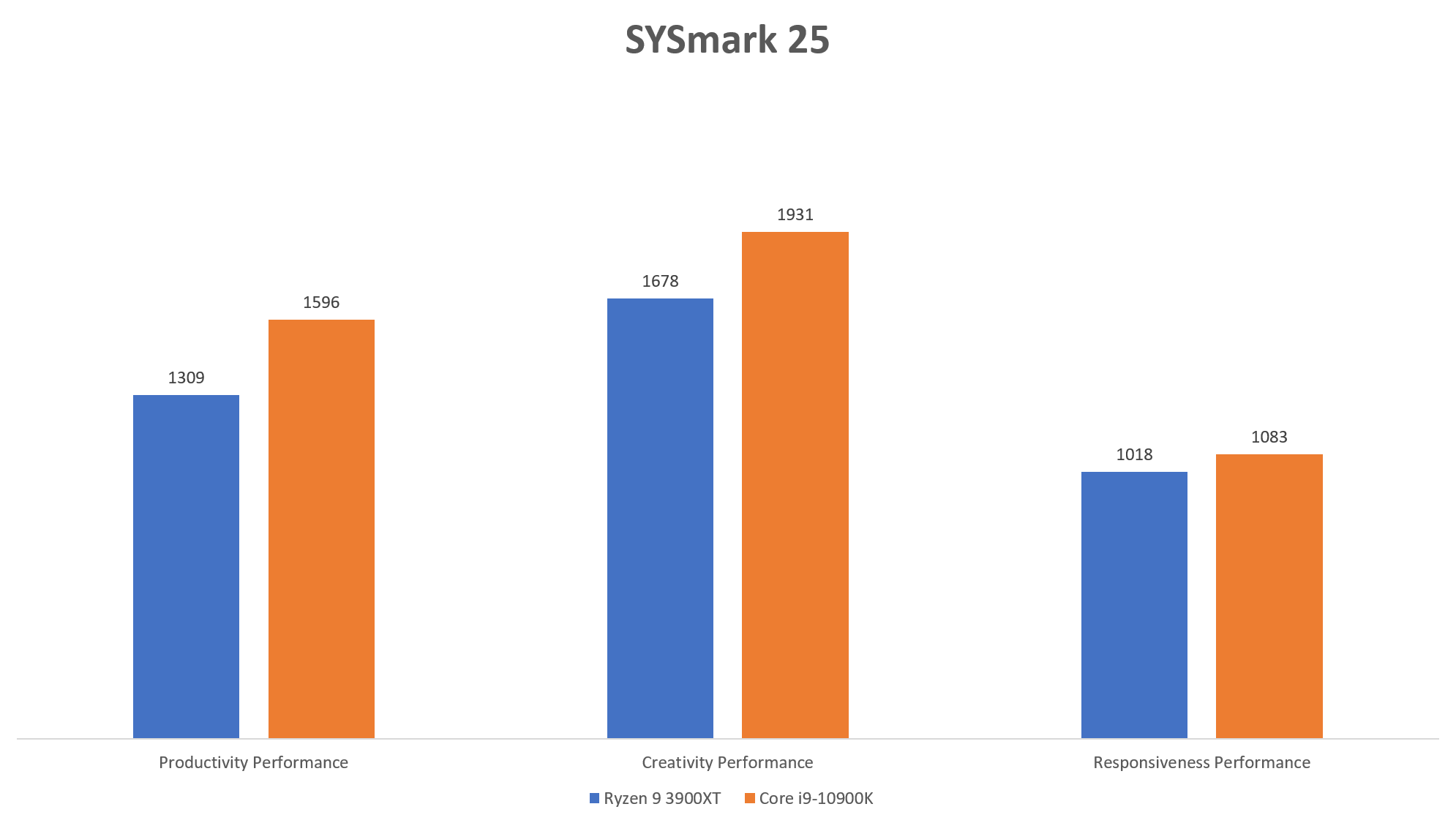 Despite the Ryzen 9 3900XT’s two core advantage over the Core i9-10900K, we can see that core speed still takes precedence in most of the day-to-day stuff that we do on our computers. The Intel processor’s high boost clock’s advantage also is a significant factor here.

The world’s fastest gaming processor…but for how long?

The 10th-Gen Core i9-10900K is truly an impressive piece of processor - but it comes at more than S$200 over the next best processor. Intel has managed to drag their 14nm Skylake architecture along since forever, and every single time they managed to add incremental improvements. This time with 10 cores, 20 threads, and higher clock speeds than ever thanks to various nifty boosting algorithms. It certainly is the fast gaming CPU you could get your hands on and we’ll know very soon how it stacks up to AMD’s newest Zen 3 Ryzen 9 5000 Series. With the recent launch of NVIDIA’s RTX 30 Series and AMD’s own high-end graphics cards coming this month too, it’s a fantastic time to be a PC gamer.