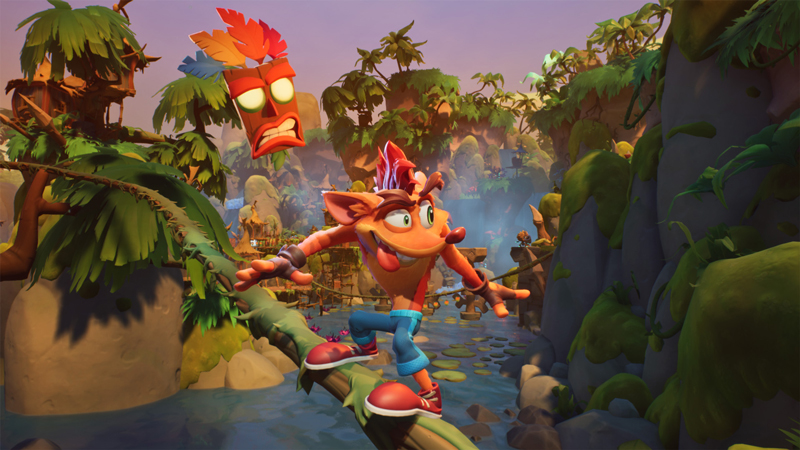 Can we all just take a moment to thank the gaming gods that Crash Bandicoot is finally back in a platformer? Recently, publisher Activision let me get hands-on with Crash Bandicoot 4: It’s About Time, the sequel to Naughty Dog’s timeless trilogy of platforming games. I got to play three levels of this highly anticipated game, which takes Crash to snowy lands and dinosaur-filled jungles.

While I only got to play a small slice of the game (which reportedly has over 100 levels!), it was plenty enough to get a feel of everything developer Toys for Bob is bringing to the table here. Make no mistake: this feels like a true sequel to the original Crash Bandicoot games, with a crushing level of difficulty, precise platforming and lots of replayability. However, there’s a lot of new stuff in here as well, and that's worth digging into.

Crash Bandicoot 4: It’s About Time is about time travel. Big surprise, right? The game’s story picks up from Crash Bandicoot: Warped, with Dr. Neo Cortex, N. Tropy and Uka Uka stranded in an interdimensional prison. After several failed attempts at escaping, the trio finally bust out by tearing a hole in the fabric of space-time.

As you can probably already guess, this doesn’t bodes well for the rest of the universe. Crash and Coco decide to put a stop to this cosmic villainy, aided by new Quantum Masks - which give them special powers. This leads them to bounce across space and time, bumbling their way through different time periods. Hence, the dinosaurs.

I didn’t get to see much of the actual story while playing this demo, besides small cutscenes of Crash landing onto a level and trying to figure out the best way to not die. That means I can’t really speak to its writing, but I did really like how much this game returns to the series’ roots. Just like the old games, you’ll be running through vibrant and well-designed levels to make it to the finish line with as much Wumpa Fruit as you can. Players can even switch between Modern and Retro modes, the latter of which only gives you a certain amount of lives per level. 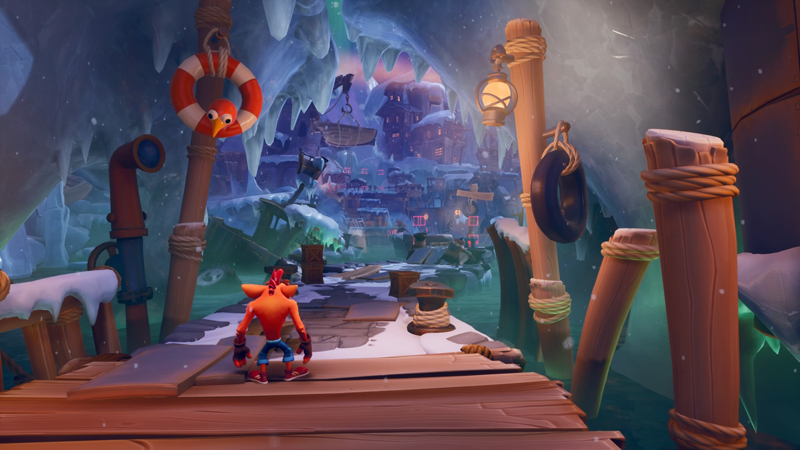 Crash Bandicoot 4 somehow manages to breathe fresh air into an already timeless gameplay loop, without disturbing what made it work in the first place. That much was obvious in the first level I played, Snow Way Out. In it, Crash finds himself in a winter-themed environment, filled with broken sheets of ice floating on rivers and zombie fishermen firing harpoon guns. It’s not exactly the safest place to be, but Crash doesn’t have much of a choice here.

I got to try out one of the game’s Quantum Masks - Kupuna-Wa. This particular mask lets Crash slow down time, a gameplay element that I had to use in a few creative ways throughout the level. For example, by freezing falling sheets of ice during an avalanche to jump across them, or slowing down enemies that might be in my way. The mask was taken away and given back to me multiple times however, which meant that I couldn’t rely on it throughout the level. 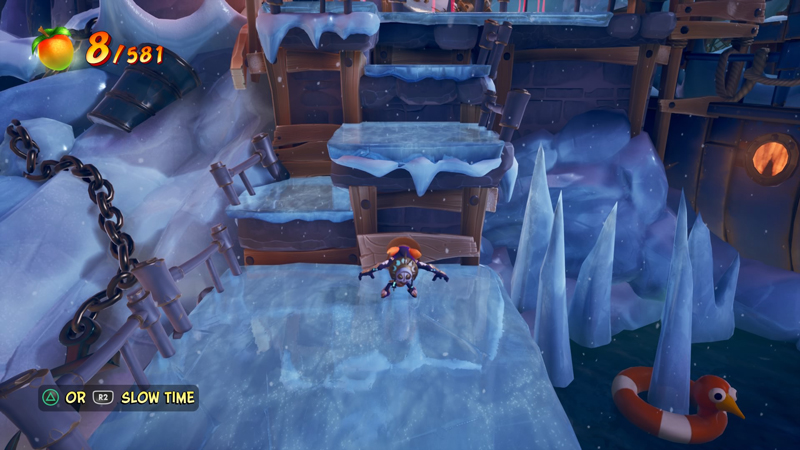 Trying out this mask did make me a little concerned, though. Quantum Masks basically serve to add new types of environmental puzzles to gameplay, but I didn’t find many that actually piqued my imagination or made me think. A good puzzle should have you stumped for a bit, with a creative solution just around the corner. Many of these time-related puzzles felt tacked on, and didn't really translate into fun platforming sections.

Interestingly, another level I got to play was Snow Way Out - Cortex Timeline. In this version of the level, I played as the villainous Neo Cortex, who has an entirely different set of abilities from Crash. Instead of double jumps, he can fire a ray that turns enemies into platforms, allowing him to get around environments. He can also dash in mid-air, which means you usually have to spend a lot of time transforming enemies at just the right time, and dashing towards them.

Personally, I wasn’t really feeling Cortex’s gameplay. It feels strangely limiting to play as him, and a whole lot less fun to boot. After the short Cortex segment, the game switched over to Crash's perspective and forced me to replay the exact same stretch of Snow Way Out again, with harder enemy and crate placements. It felt pretty repetitive and unimaginative, and I truly hope these levels turn out to be optional in the full game. 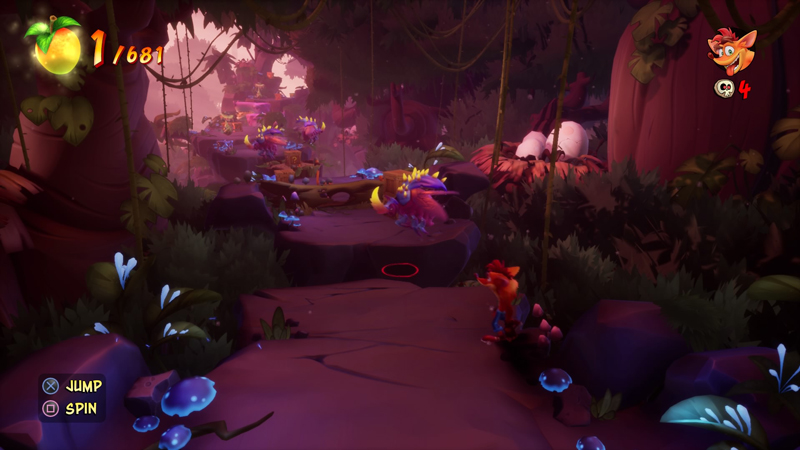 Oh man, this was my favourite level of the bunch. Dino Dash tosses Crash into the Eggipus Dimension in 88 Million B.C.B., whatever that means. The entire level takes place in a very colourful looking prehistoric land, with all the tropes that come with such a place - deadly plants, volcanic lava, a stampede of dinosaurs and a deadly T-Rex chase.

Here, I met another Quantum Mask - Lani-Loli. Lani-Loli gives Crash the ability to phase objects in and out of existence, such as crates and environmental hazards. This became particularly useful when I had to rail grind across tree vines Tarzan-style, and I had to use the mask to phase out obstacles in my path at rapid speed. 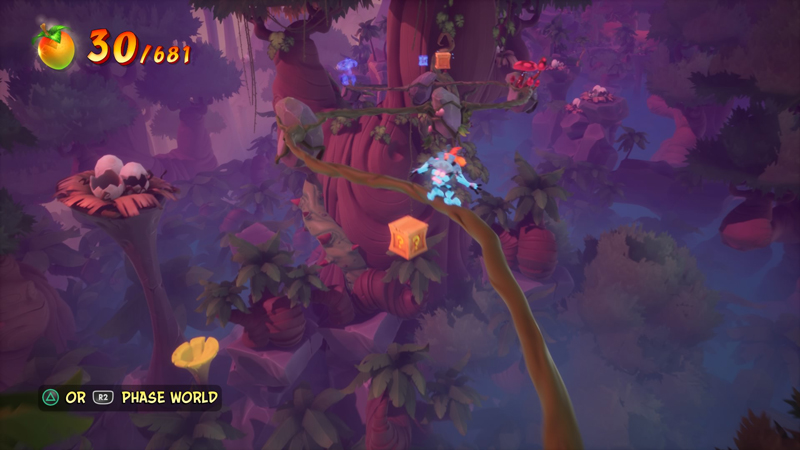 I can’t tell you how many times I died in each of these modes. Like the most fiendishly-designed Super Mario Maker levels, you have to maneuver levels in Crash Bandicoot 4 in very precise ways. Gameplay is usually really fast-paced, and you have a very limited window in which to vault over obstacles and dodge death. This actually got frustrating sometimes, because I felt like the game wasn’t letting me get creative with everything Crash can do. There are no two ways around a puzzle - but that’s just a Crash game for you.

Dino Dash peaked three times with intense chase sequences, where Crash had to run towards the camera while a T-Rex broke into the level and chased him at a breakneck pace. Think of the rolling boulder from that one Crash sequence in Uncharted 4 - but the boulder is a bloodthirsty dinosaur with jaws the size of cars. It was amazing! Everytime the dinosaur popped up, my palms got sweaty as I navigated perilous terrain to get Crash to safety - only for it to appear again down the line. 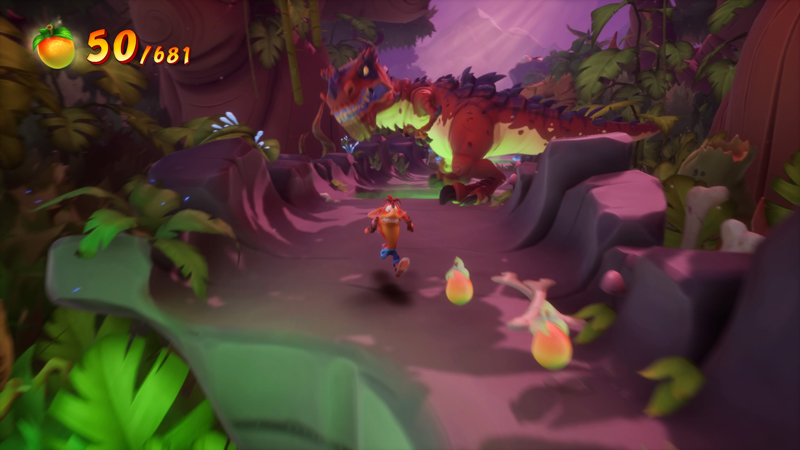 I don’t even care that it took so long for us to get here. I’m just glad that we have a classic-feeling Crash Bandicoot game again! I’ve only experienced a very tiny slice of the game of course, but it felt great. Visuals are eye-poppingly colourful, environments are detailed and full of life, and character animations are just as fun and cartoony as they've always been. Gameplay is fast, precise and incredibly difficult - but super rewarding once you manage to beat a level.

If the rest of this game lives up to the creativity I saw in Dino Dash, I think longtime fans of Crash Bandicoot are about to be very happy players. Crash Bandicoot 4: It’s About Time launches on PlayStation 4 and Xbox One on October 2, 2020.