Impressions: The Assassin's Creed Valhalla experience is as Viking as it gets

Impressions: The Assassin's Creed Valhalla experience is as Viking as it gets 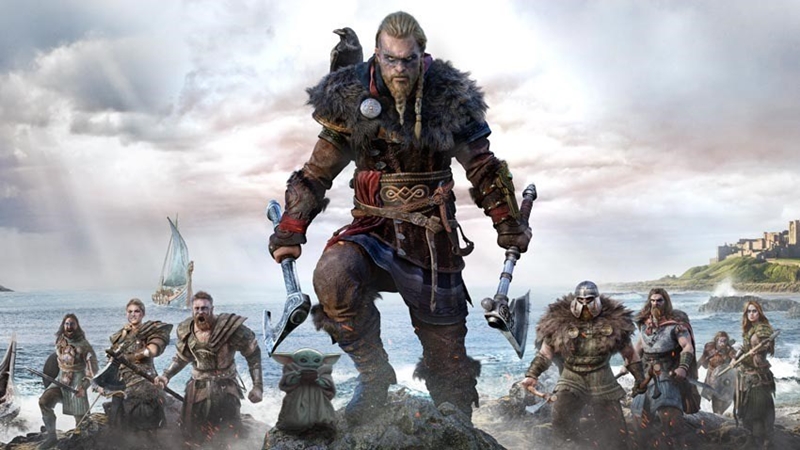 As one of the launch titles for both the PlayStation 5 and Xbox Series X, Assassin's Creed Valhalla certainly has a lot of work cut out for it. Every single aspect, from graphics, to gameplay and even the voice acting have to be flawless, and we're glad to report that the game looks extremely promising as it stands.

But how do we know it? Well, let's just say the only thing better than looking at footage of a game-in-progress is actually being able to play it. Early last week, we were treated to a short hands-on session with the game by the folks at Ubisoft (thanks much!), and needless to say, we had a real blast lopping off Anglo-Saxon heads as the fearsome Eivor. Of course, there's lots more to do in ninth century England than just killing people and looking utterly badass. 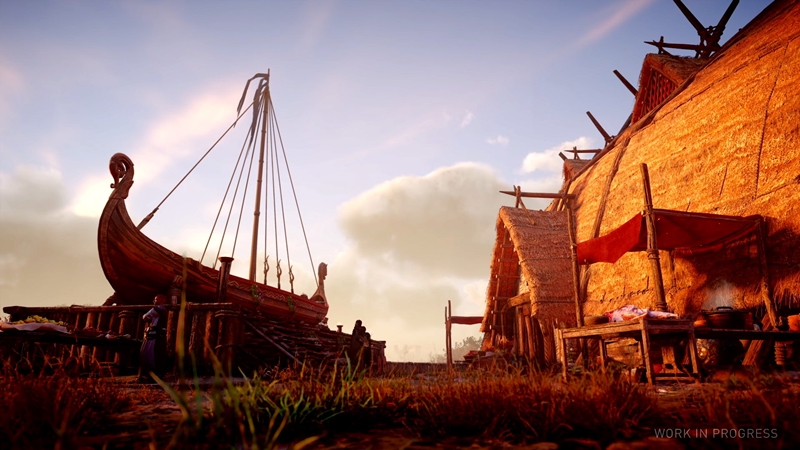 As the developers showed off during the Ubisoft Forward digital conference held earlier today, we decided to kick off the session with the same East Anglia Quest demo as well. As the story goes, Eivor and his friend Finnr (I went with the male version) are scouring the countryside in search of allies for the fight against the rogue Dane army led by Rued. The latter isn't just responsible for tearing up and terrorizing villages, though - he's also killed the Anglo-Saxon king-to-be Oswald. Eventually, the duo come across a settlement called Theotford, where the leader agrees to join the fight if Eivor is able to liberate the neighbouring village of King's Bury.

So Eivor and his raiders set off in their longship to reclaim the village, which proves to be pretty challenging but amazing fun. Combat is decidedly brutal and in-your-face, much more so than previous instalments. Plus, being able to dual-wield with any two weapons is an interesting feature, although it's unfortunate we weren't able to try out a double shield setup. Still, going nuts with the (overpowered) flail is ridiculously satisfying, and it kind of makes you wonder if they should have omitted the "Assassin" part of the title given the absolute thrill of charging into battle head-first. 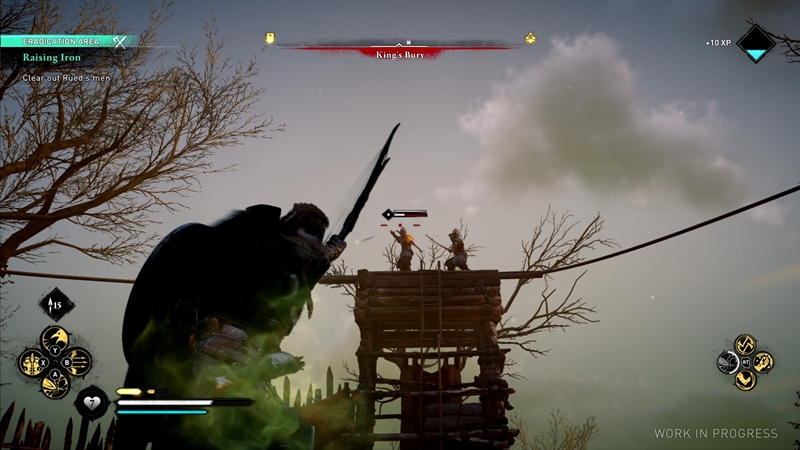 The general experience of battle also feels a lot more fluid than before, and watching Eivor flawlessly transition from bow and arrow to flail into throwing axe combo is immensely cool. Accordingly, each of these battles, or "raids" as they're called goes on until you slay the mini-boss at the end, and it was hardly a cakewalk. Best dig your heels in, chaps - the fights are actually tough!

After the raid, Eivor once again travels on horseback to meet up with Finnr, who has gone on ahead to Northwic to prepare for the assault. This bit kind of feels like you're playing The Witcher 3: Wild Hunt, as your trusty steed gallops across the countryside, collecting materials and completing side quests. Some of our "numerous" escapades during this part of the demo involved stealing arrows from a martyr's corpse, adding feline raiders to my mighty longship, as well as winning the medieval equivalent of a rap battle. Yeah, "flyting" is indeed loads of fun, especially if witty rhymes are your gig. 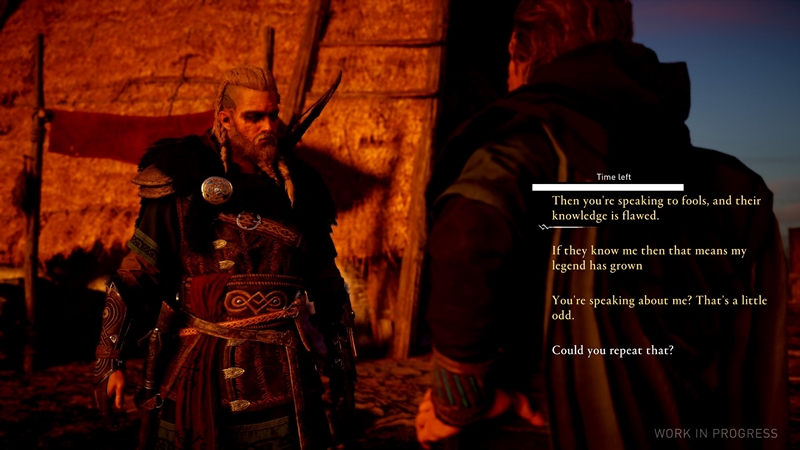 After all that fooling around, it's time for the night assault on Rued's stronghold. Our welcome greeting was a fiery hail of arrows, and being able to put your shields up to defend is oddly reminiscent of Black Flag, where you could brace for cannon fire to mitigate damage. Anyway, what follows is more chopping, beheading and general chaos, until you encounter Rued...and the still very much alive Oswald. Lots of talking later, we faced off against the big guy himself and his pet wolf - I was expecting much more of a fight from him, but hey, at least we won. Oh, and when presented with the choice of whether to kill him or spare his life, let's just say I decided to go with the "safer option" in case he decided to try anything funny.

In case it wasn't clear, I lopped his head off. Naturally Oswald wasn't too happy about it, but hey, Vikings will be Vikings. 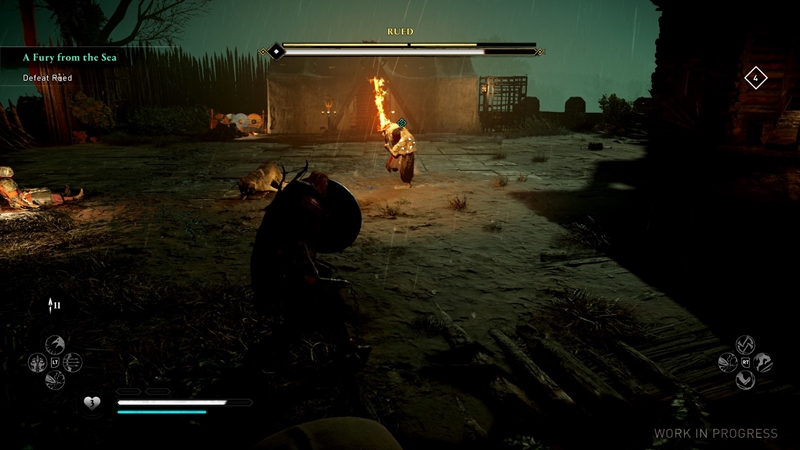 At that point, we were running out of time for the demo, and so decided to skip Oswald's wedding and jump straight into the Raid demo, which is essentially what we did for King's Bury earlier on. However, our guide shared a little more on what these battles were for during this section, apart from the thrill of killing Anglo-Saxon chaps.

Apparently, there are two "variants" of Raids: the first are the usual kind, like the King's Bury fort. Meanwhile, the second is a much larger and tougher version, which are similar to our attack on Rued's stronghold. What's really interesting about doing these quests is that the loot you acquire in the process, which includes raw materials like wood, stone and whatnot can be used to enhance and grow your own little Viking settlement. In a sense, it's kind of like that part in Spore where you attack other villages to make yours bigger and establish dominance. 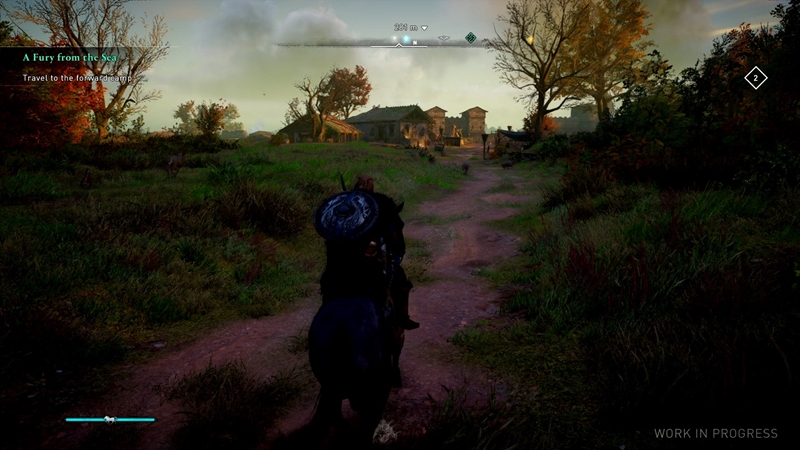 Anyway, apart from plucking arrows from corpses and flyting, the Ubisoft Forward event showcased a lot more interesting things that players can do in Valhalla. Stacking cairns is one of them, and there are even drinking challenges - after all, no one parties as hard as a Viking, and no Viking parties as hard as you. It's a very full-bodied and authentic experience, and the excellent voice acting, complete with slang and terminology from the Dark Ages only helps to enhance its appeal. Suffice to say that from what we've seen so far, Assassin's Creed Valhalla is really going to knock players out of the park when it releases on November 17.

P/S: Oh, and don't fret about whether to grab the older (PS4 and Xbox One) or newer (PS5 and Xbox Series X) versions - all players who purchase the game will be entitled to a free upgrade to its next-gen version.