FHD, UHD, and now SUHD. These naming schemes can get more than a little confusing when it comes to TV marketing and branding. Samsung on Friday launched its new line of premium SUHD curved smart TVs, and we knew the public might be a little puzzled as to what the "S" appended to the UHD designation stands for. Do the resolutions on these TVs surpass 4K?

As it turns out, Samsung has simply reserved the "S" identification for its new JS9500 and JS9000 4K curved displays to single them out as top-end, flagship models that utilize a brand new panel technology that produces more accurate colors and better contrast levels than previous generation UHD TVs. Just like Samsung's smartphones where the "S" branding nomenclature signifies "premium", Samsung followed up to upgrade their new TV's branding as well with the new SUHD TVs.

For the very first ime, HWZ conducted a members' event at a store, but only because the brand new TVs were just launched the day before and a wide variety was already decked up at Harvey Norman's Suntec City outlet that made it ideal for our members to experience them effectively.

30 HWZ members arrived Saturday morning at Harvey Norman Suntec City for an exclusive showcase of Samsung’s premium 4K SUHD TVs and experience the best that Samsung has to offer in TV technology. They were also there to learn about the major shifts in TV technology, the new panel technology employed on the new SUHD TVs, and pick up helpful buying tips and mingle with our editors. Here's what went down at the event that morning:- 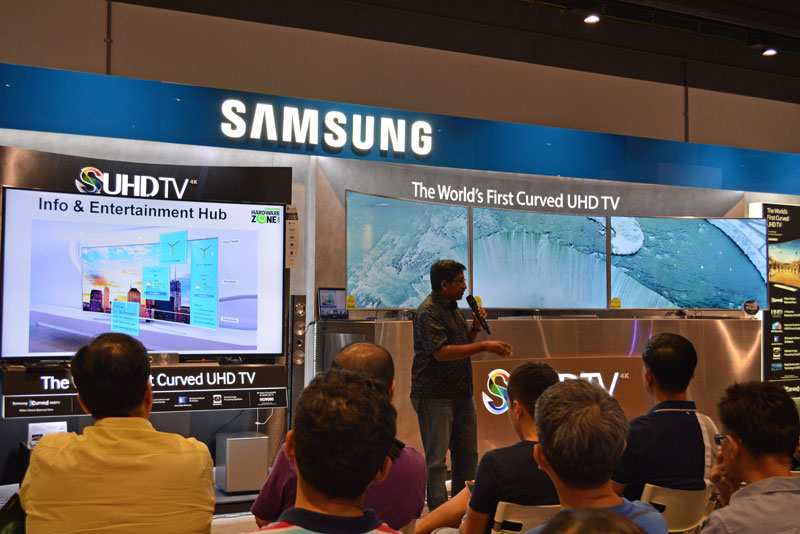 Kicking off the session was HWZ Editor Vijay Anand, who spoke to the audience about consumer purchase patterns and the evolution of what we’ve come to expect from our TVs. We’re no longer content to simply be able to watch cable in the living room, and we expect brighter, crisper images and the ability to stream content to and from our TVs and install apps on it. Our TVs are fast becoming connected devices in their own right and are growing into veritable information and entertainment hubs. The Samsung JS9500 and JS9000 SUHD TVs are designed to satisfy precisely this demand for the most discerning customer. 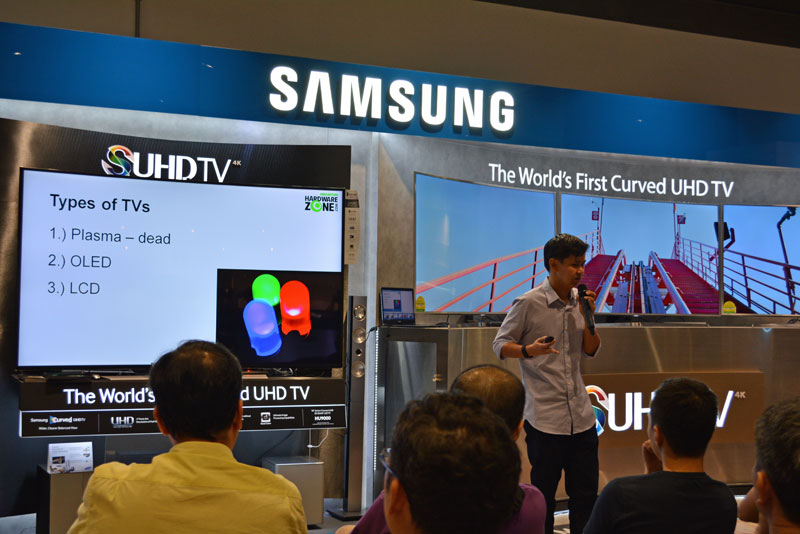 Next up was our Deputy Editor Ng Chong Seng, who took to the floor to give the audience a run-down on TV panel trends, 4K displays and curved TVs, and general buying tips with regards to the updated TV buying landscape. Other than the now defunct plasma displays, panel technologies fall into either of two categories, namely, OLED and LCD. Chong Seng went on to explain that the term "LED TV" is actually slightly misleading, as LED TVs are really LCD TVs with LED backlighting instead of CCFL . He then delved into quantum dot technology, used in the latest TV panels such as Samsung’s JS9500 and JS9000 SUHD TVs. Quantum dots are essentially nanoparticles ranging from 2 to 10nm in diameter which emit a certain wavelength of color depending on their size. He explained that quantum dot technology combines the benefits of OLED and LCD technology to produce brighter, more saturated colors than regular LED backlights. Displays using this technology also enjoy improved color accuracy and consume less power.

But the talk wasn't all about the technical details, and Chong Song also dispensed practical tips on what to consider when buying your next TV and how to calculate the optimal TV size based on your living room space. Rounding off the segment was Samsung's Product Manager for TV and AV, Gavin Yeong, who introduced members to Samsung’s proprietary implementation of quantum dot technology in the new SUHD TVs. The JS9500 and JS9000 use nano-crystals that deliver up to a 1.2x wider color gamut and color accuracy and up to 64x better color expression than conventional UHD TVs - namely Samsung's last generation of 4K TVs. 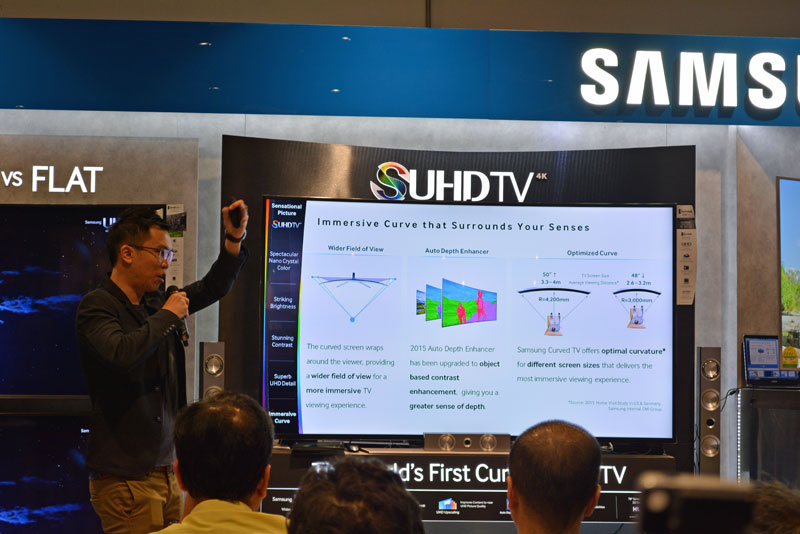 In addition, Gavin told the audience about Samsung's improved Auto Depth Enhancer technology, which sports improved object-based contrast enhancement over the previous area-based method, thus giving viewers a greater sense of depth and more realistic viewing. He then went on to talk about the advantages of a curved display that are a direct result of its curvature, such as a wider field of view and more immersive viewing experience.

Following the talks given by Vijay, Chong Seng and Gavin, there was a short demo session/ break where the participants were able to take a closer look at the TVs themselves. Samsung had various representatives on-hand to help out with any questions the attendees had. Vijay and Chong Seng also aided by lending their expertise too. 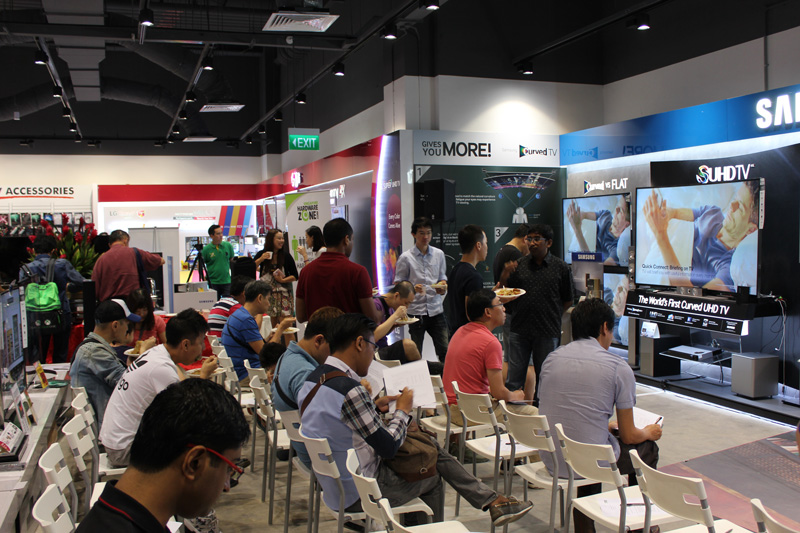 Many of the attendees chose to go up close and personal with the new TVs during the break, though some stayed back to complete the HWZ survey. Of course, for those who went to get a closer look, most of the attention was drawn to the JS9500, the current flagship of Samsung's SUHD TV line. With its sleek chrome looks, nobody could pass up the chance to see the TV in action. 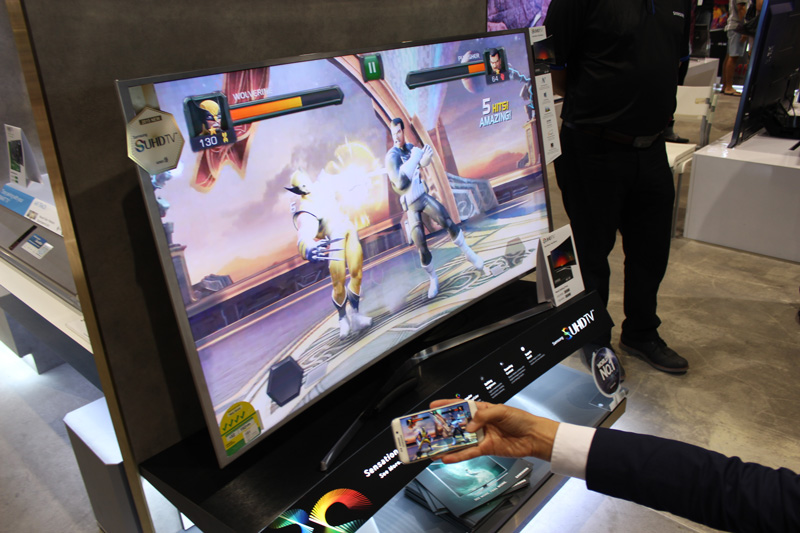 Throughout the break, the HWZ editors also hung around and helped out with the attendees' questions. Gavin, the speaker from Samsung, also did his part to answer any queries those attending had regarding the new Samsung SUHD TVs. 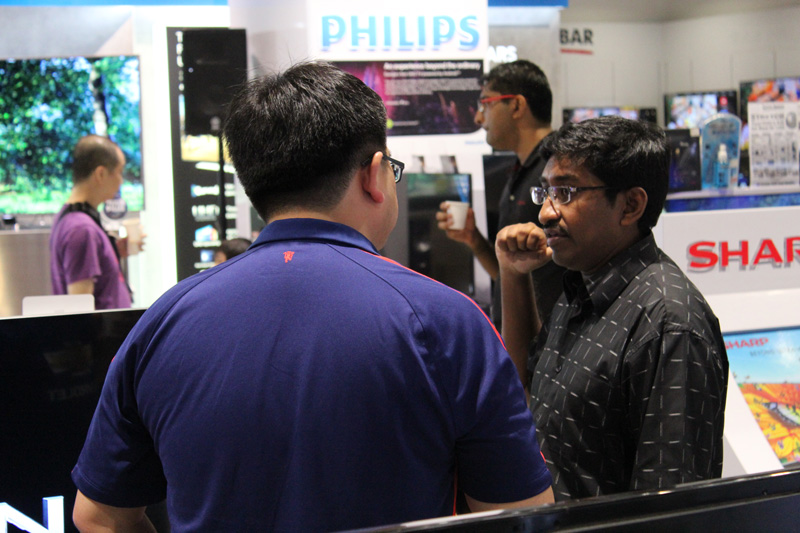 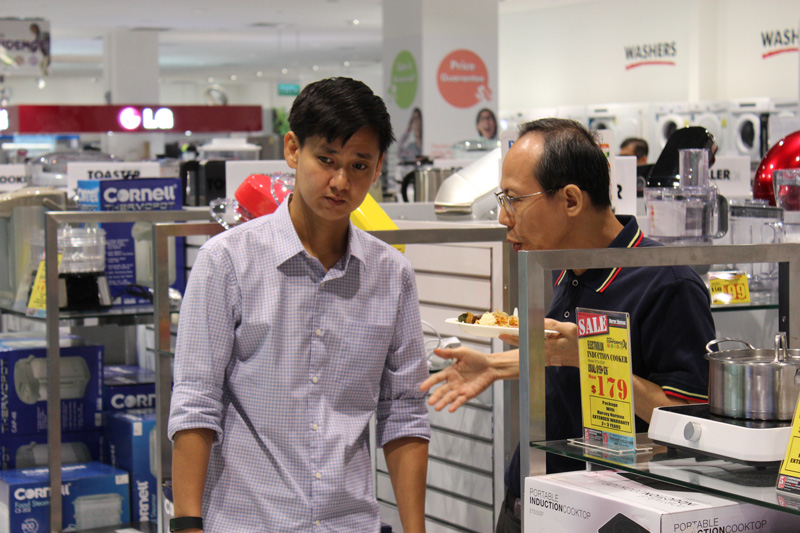 The attendees gathered one final time after the break for a short Q&A session, as well as a short quiz where winners could win prizes from Samsung. HWZ Editor, Vijay Anand, hosted this final part for the event. 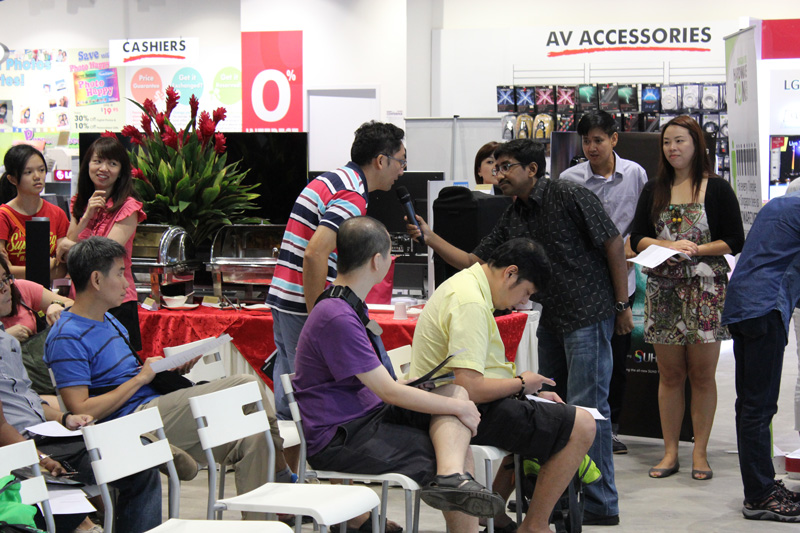 That concludes our exclusive HWZ member event with the Samsung SUHD TVs. If you're interested and want to attend similar talks and sessions, do keep a close eye on HardwareZone's many channels from the forums, FB page, twitter channel and even the main site for information on upcoming events. Meanwhile, here’s a glimpse of some of our other past member events.

For the latest news in televisions, you can always check out our TV product guide here on HWZ. We're certain some of you would like to know how well the new TVs fare in our point of view and we'll get to reviewing the new Samsung SUHD TVs as soon as we get a set as the stocks are only just being made available in the retail channel.