Happy new year, folks! Without further ado, let’s get on with the first HWZ Deal Alert for 2017.

One of a handful of headphones to sport Apple’s W1 chip for fuss-free pairing with your iPhone, and seamless switching with your iCloud-linked Apple devices thereafter, the Powerbeats 3 Wireless packs 12 hours of battery life, and can top up an hour’s worth of charge in just 5 minutes. The Powerbeats 3 Wireless charges over USB, and a USB-A to USB Micro-B cable is bundled in the box. Other accessories include a carry case and eartips of four different sizes. Normally costs S$268 here, but Amazon is now selling the black version for US$150 (~S$217). Too bad it isn’t eligible for free shipping to Singapore, so you’d need to use a forwarder (or a friend who's still holidaying in the States). 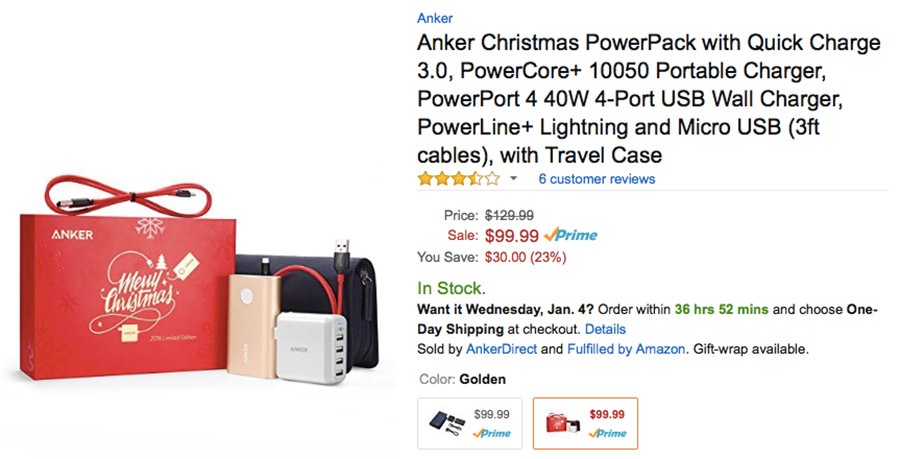 Yes, I know Christmas is over, but this deal hasn’t. The Anker Christmas PowerPack packs a PowerCore+ 10,500mAh power bank, a PowerPort 4 USB wall charger (4 ports), PowerLine+ microUSB and Lightning cables, as well as a case to hold them all. The usual price is US$100, but use the code “ANKSPL77” to drop it to US$66.66 (~S$97).

There are literally hundreds of writing apps for the Mac, but (in my humble opinion) not many can match Ulysses’ simple yet powerful text editing design. An Apple Design Award winner, Ulysses for Mac is seeing a rare discount this holiday period, and is currently going for S$47.98 (down from the usual S$64). Yes, it’s not a cheap app, but if you write a lot, trust me, it’s well worth it.